Last winter I tried Noodles & Company’s seasonal additions to their macaroni and cheese menu, a task that I took up with gusto. Their seasonal items are lighter fare for the summer: a trio of salads. I was again invited to try them for free and share with you, my lovely readership, my thoughts on the new items. Let’s go from worst to best, shall we?

Salad #1 is the Chili-Lime Ginger Salad. 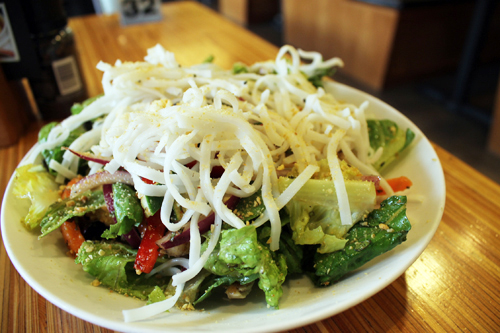 This salad wants to be amazing. It looks pretty cool with that pile of rice noodles on top, but those noodles are its ultimate undoing. There were way too many of them for a salad.  In fact, there was way too much of everything but lettuce for a salad. The noodles were not cooked enough, and they had absolutely no flavor, not even some salt to enhance their natural taste. There just was no taste. But I could have overlooked that if the rest of the meal was worthwhile—everything has a weakness, and I am a forgiving person. Hiding beneath those noodles were thick matchsticks of carrot, chunks of cucumber, loads of red onion, bell pepper strips, peanuts, mint, black sesame seeds, and strips of chicken breast meat. The dressing was the best of all three salads because of its refreshing and light elements of lime, chili, and ginger. The peppery chicken strips were tasty, and the carrots where thicker than normal for a salad and very crisp, which I enjoyed. However, the rest of the salad just didn’t pull together, starting with those noodles. One-word description: Flavorless.

The other two summer salads on Noodles & Company’s menu are much better options than the first. Salad #2 is the Backyard Barbecue Chicken Salad. 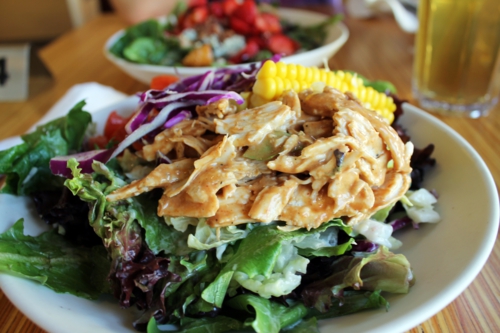 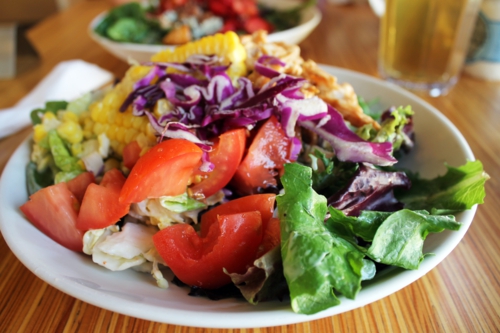 It’s a mixed greens salad topped with freshly cut corn, roma tomatoes, pulled chicken, and a smoky, creamy dressing. I have two critiques of the salad. The first is that the red cabbage tasted dry; perhaps radicchio would be a better option. The second is that the dressing was too thick and a tad too sweet, but it was also addictively smoky and that quality made the whole salad pop. The chicken was moist, and I always love having whole chunks of corn cut off a cob—it saves my teeth from the need for toothpick battles and tastes amazing all at the same time.  One word-description: Smoky.

Salad #3 is the Spinach and Fresh Fruit. 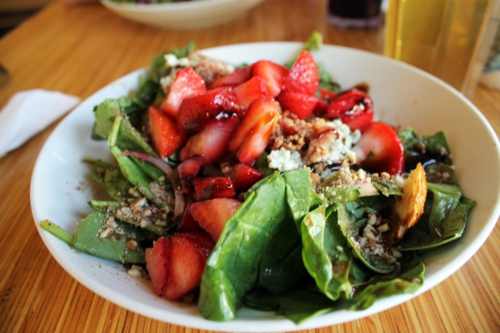 Its ingredient list is crisp spinach, bacon, strawberries, pecans, crumbled blue cheese, house-made croutons, and a balsamic fig glaze. That glaze shares the same critique as the dressing for the barbecue salad—too sweet and too thick—but it was delightful in spite of that. I’d recommend asking for it on the side and enjoying it in small proportions.  The huge wedges of crouton were a highlight of the salad along with the sweetness of the strawberries and tang of the blue cheese. Honestly, the bacon felt pesky in the midst of the other delicious summertime wealth on that salad. It’s one I would eat again and again. One-word description: Tangy.

As you can tell, I was impressed with the spinach and fruit salad, and it’s a great alternative to greasier fast food options. The barbecue salad is perfect if you want a heartier choice but one that still won’t weigh you down in summer. The Chili-Lime salad would probably improve if the noodles were left off. The rest of the ingredients might get a chance to shine without them.

Thank you, Noodles & Company, for inviting me to review the new summertime salads!