Welcome to the second half of our Charlottesville weekend trip! My local friend had recommended a slew of restaurants for a nice dinner out in Charlottesville, but Ben rejected them all, settling instead on L’Étoile (817 West Main Street). Because it had been his birthday a few days earlier, he got to choose, and I must say, he chose very well. 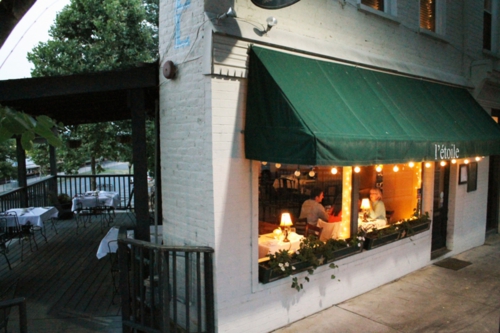 It’s a nouveau Southern restaurant with French influences, and it looks deceptively small both inside and out. 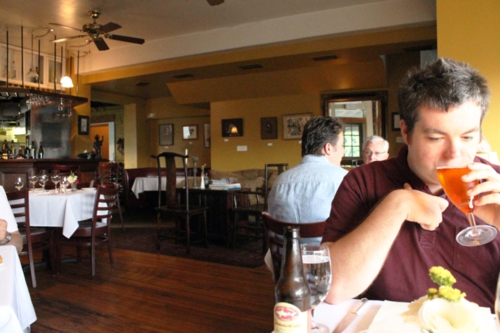 In addition to that front room, where you can see Ben enjoying a beer, there is a large porch outside and a second floor. But it feels like an intimate space. If I had any complaints, it’s that our waiter was rather brusque, but hey, everyone has an off night. Everything else was top-notch, starting with the amuse bouche of a crab cake with pureed broccoli aioli and microgreens. 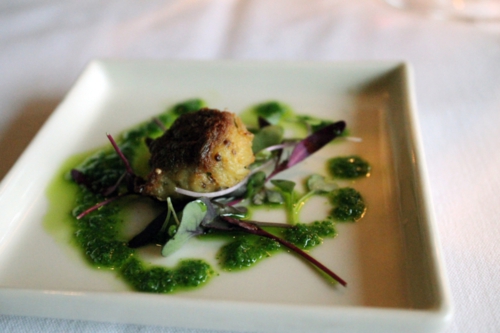 Gorgeous presentation, which was true of all the dishes. The crabcake was fine, and the greens were overwhelmed by the aioli, but it was a beautiful start to the meal. The next course, a three-cheese plate, was exceptional. 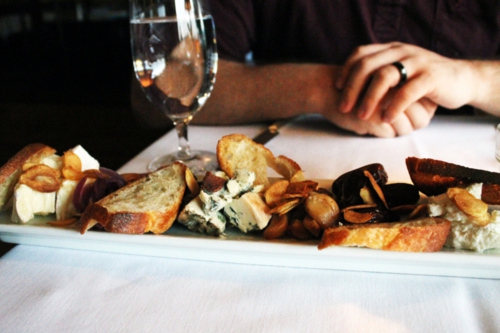 The flowing quality of that presentation was eye-catching. In addition to the cheeses and breads, it contained olives, roasted garlic cloves, thinly sliced and fried garlic chips, and red onions pickled with cloves. The red onions were not my chunk of cheese, but everything else was delicious. The bread was brushed with melted butter and liberally dosed with salt that combined best with the brie and blue cheeses, though it overwhelmed the chevre. But as a cheese plate, it was so much more inspired than I expected.

For an entrée, I opted for two appetizers, though I should have just had one, because the shrimp and grits was plenty. 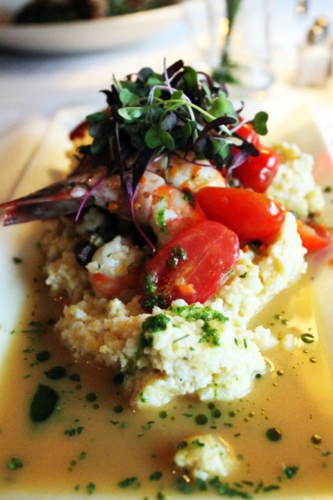 It was served with a mirepoix, roasted tomatoes, and more of those microgreens and the broccoli aioli. They used thick kernels for the grits that added texture and crunch that made the dish.  Each individual element was delicious on its own and together. Mirepoix is often an afterthought, but it wasn’t here. It mixed perfectly into the dish, making it all more savory.

My second appetizer was a cold peach, goat cheese, and cucumber soup. 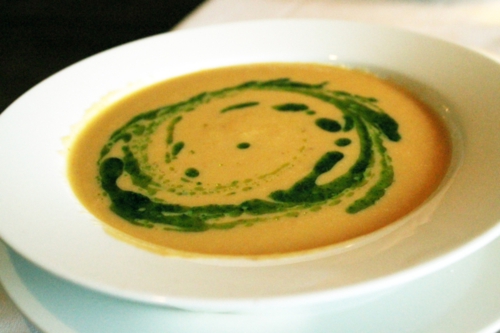 Oh look! More of that ubiquitous broccoli aioli! It was extraneous, but it made for pretty artwork in my soup. The peach, goat cheese, and cucumber all played an equal role in the soup, and it was both soothing and smoky. I may try to reproduce it at some point.

Ben decided on a pork dish with spinach, but I did not taste it. It was beautiful as well with a sprinkle of those microgreens on top. 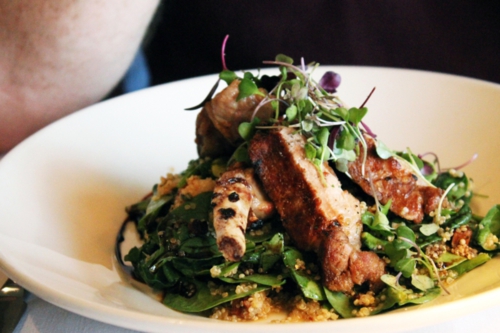 We chose to split the peach bread pudding for dessert, and I also had a glass of Foggy Ridge’s Pippin Black dessert cider. The cider was wonderful: plenty sweet with a tart and slightly bitter edge to it. 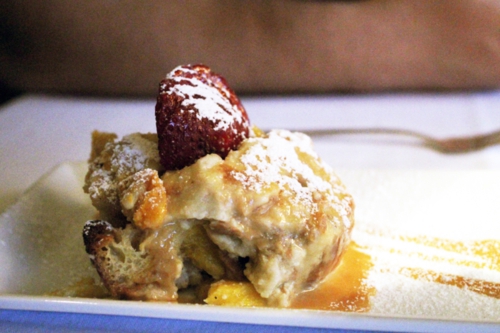 The dessert was closer to a French toast casserole than bread pudding with a thick slice of cinnamon-swirled bread baked with a custard. It was tasty, but I prefer French toast for breakfast. Luckily, that was followed up with a dark chocolate truffle to finish the night. 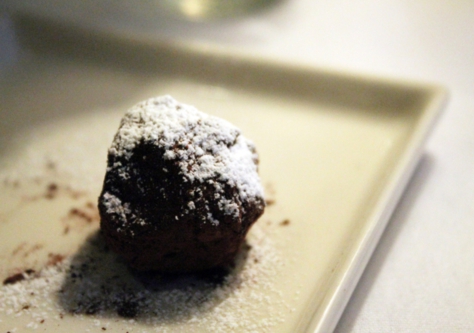 That satiated any lingering need I had for sweetness.

It was a pretty night out when we left L’Étoile. 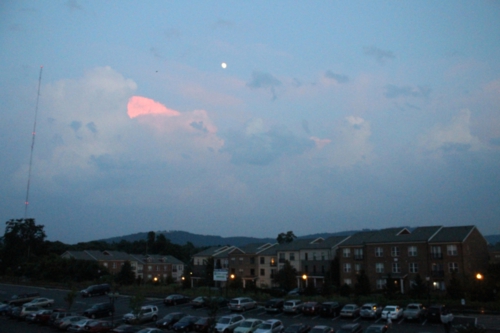 We decided to walk to the Downtown Mall for drinks to cap off the evening. L’Étoile is about halfway between the Mall and the University of Virginia, so we had a few blocks to enjoy the slightly cooler air of the night. The Whiskey Jar (227 West Main Street) was our destination. 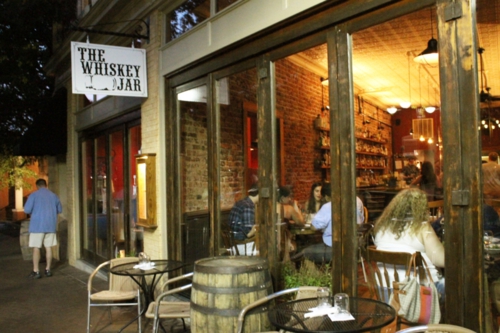 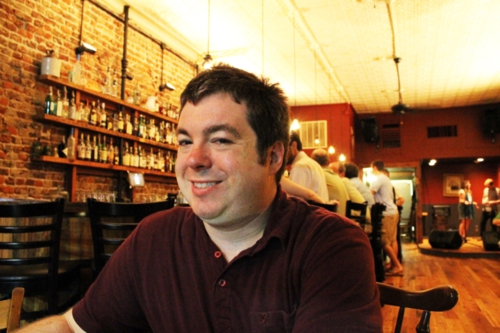 It’s a great watering hole, perfect for drinks with friends after work or after a five-course meal, as the case may be, though it’s rather loud inside. Of course, their drink list is whiskey heavy. 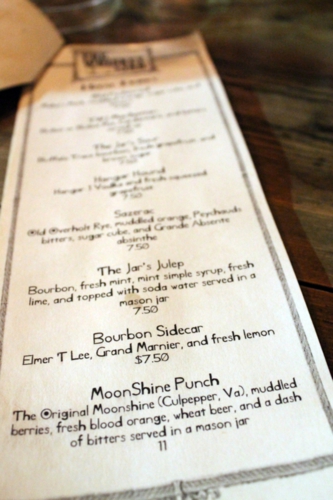 I started with the Jug Sour, which is Buffalo Trace bourbon with grapefruit juice and brown sugar. 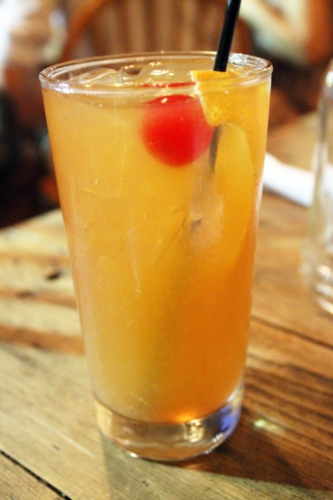 I was suspicious of that ingredient combination, but it worked quite well. I’d make it slightly stronger than they did, but otherwise, it’s a bright, fresh twist on a sour that is dangerous in that you may forget how many you’ve had.

I tried the Moonshine Punch after that, and it was also an inventive, successful drink. It’s made with Original Moonshine from Virginia, muddled berries, blood orange juice, wheat beer, and bitters. I’d call it a moonshine sangria. 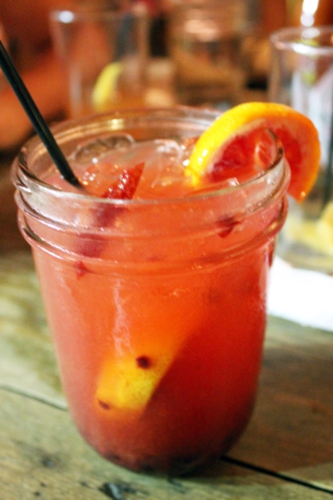 The moonshine was not easy to pick out on its own, but it was a excellent vehicle for letting the different fruits’ qualities shine through.

With the drink quest completed, it was time to head back to the hotel, which luckily had power at that point. There was only one more meal left on this foodie whirlwind tour: breakfast at the Blue Moon Diner (512 West Main Street). 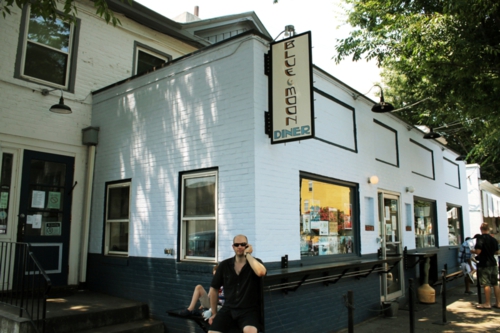 It’s just a few blocks from L’Étoile—Charlottesville is not that large of a city. The joint is popular, and it came highly recommended by that local friend; she did not steer us wrong on any choices of hers we followed. It’s cash only, so come prepared for that and for a short wait on a Sunday morning. The air conditioning is only so productive as well, but the quirky décor and the food are worth some sweat. 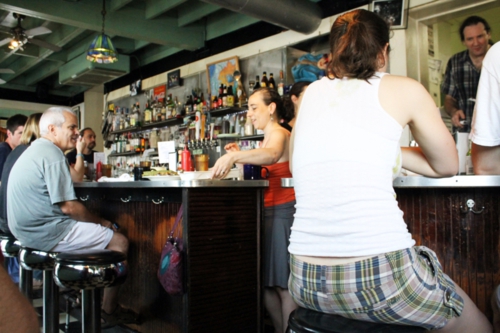 If you try, you can just make out a sideways Elvis behind the bar in that picture. The wait staff was great here, joking and enjoying the work while they poured more coffee into our giant mugs. Once again, the food was rather slow; perhaps Charlottesville likes to take its time and linger in the mornings? I had a special of the day, the Toad-in-the-Medi-Hole. 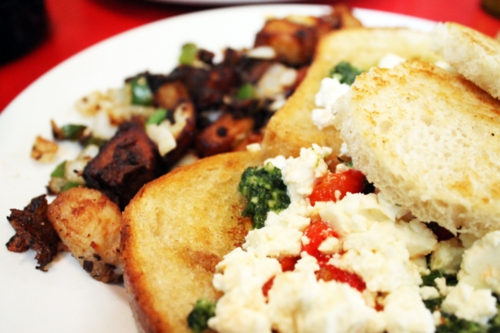 It was a take on a classic toad-in-the-hole, of course, where you cut a circle out of the bread and fry an egg in it. I believe the Medi was short for Mediterranean as those toppings were feta cheese, red bell pepper, and pesto. First of all, the home fries were wonderful because of the crispy bits of bell pepper and onion mixed in with them. Second, the sourdough bread was actually sour! That’s so rare on the East Coast. The salty cheese and garlicky pesto could have easily resulted in an overload of flavors, but for a morning when, perhaps, one may be hungover, it’s perfect—you need strong flavors then. Plus, the oily bread did wonders to soak up any lingering queasiness.

Ben had the breakfast barbecue sandwich, which was my second choice. 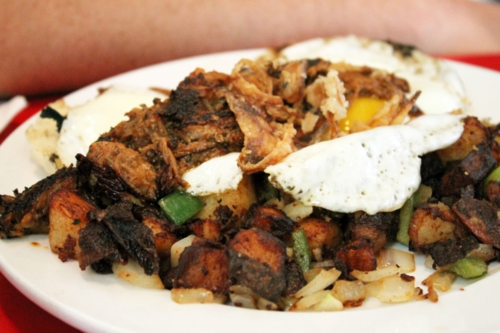 It was served with those same glorious home fries and was pulled pork over an english muffin with eggs. The pork was nicely smoked.

With our bellies full, it was time to depart Charlottesville for . . . Monticello! That’s my next travel blog. For more pictures from this visit, head here.