Our most recent weekend getaway was to Charlottesville, a college town in Virginia that also happens to be a prime tourist destination due to its central location for visiting wineries and the Blue Ridge mountains. I’d also heard that it has an impressive food scene, and I’m always game for investigating such claims. So we left on a Friday afternoon and were eating at The Shebeen (247 Ridge-McIntrye Road) by evening. 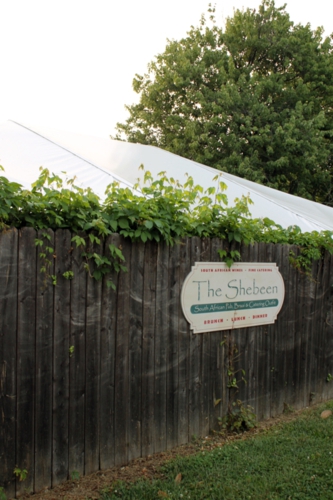 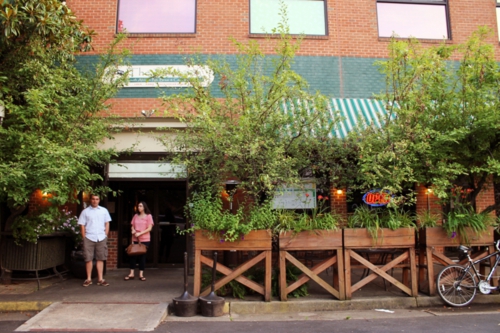 The Shebeen is one of the few restaurants downtown that has its own parking lot, making it a valued destination as my local friend informed us. It serves a mix of South African and pub cuisine. You get that strange combination even in the décor because it looks like a pub at face value, but there are rich colors, textures, and lighting throughout the space, and it feels more like a nice restaurant. 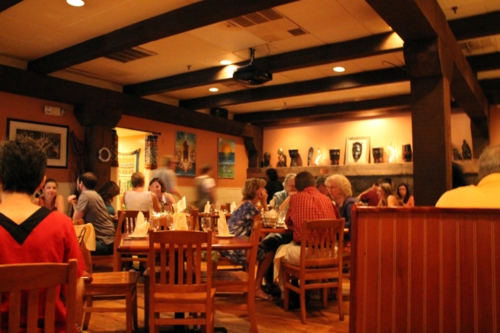 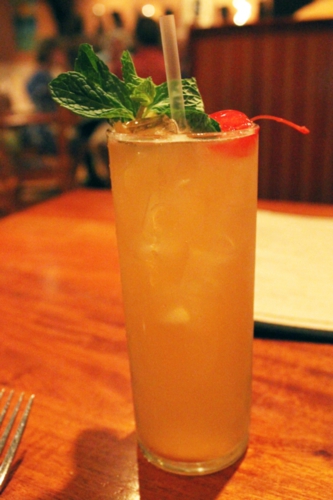 The Ginger Square was purported to be a South African favorite, but curiously enough, there’s a different South African cocktail listed as a favorite on their online menu. It was made with dark rum, bitters, ginger beer, lime juice, mint, and cherries and tasted like a remarkably good Dark and Stormy.

Ben and I split their Stellenbosch sampler and an entrée for dinner, and it was plenty of food. The entrée included delicious Brinjal fries, Zambezi chicken satay with red curry seasoning in the coating, and samosas with a very thin but flavorful layer of ground beef inside. 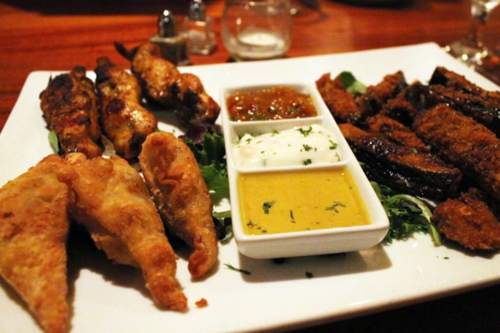 The Brinjal fries are battered eggplant, and even Ben, an avowed eggplant hater, had a few. The peanut sauce served with the satay was a stand-out condiment. The banana ketchup was not quite as impressive.

Our entrée was their peri-peri half-chicken served with a side of our choice. We went with the meali pap that was essentially an amazing, creamy portion of cheddar grits. 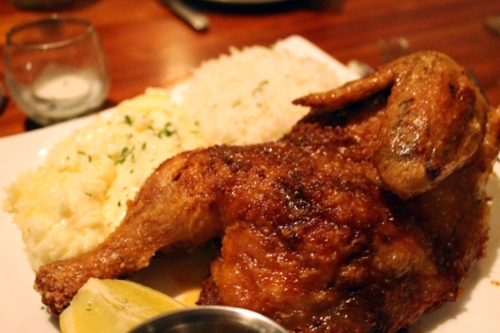 The chicken was fairly flavorless; the spices in the coating were perhaps too delicate although they were crushed bird’s eye chilies. The basmati rice was dry, too, but that meali pap was totally worth going to The Shebeen, and I’m sure there are other great items on the menu to discover.

After dinner, our friend took us on a stroll through the Downtown Mall, Charlotte’s pedestrian shopping center that takes up a few brick-lined blocks with storefronts and eateries galore. 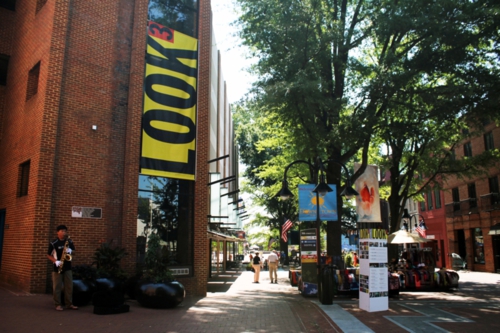 East portion of the Mall. 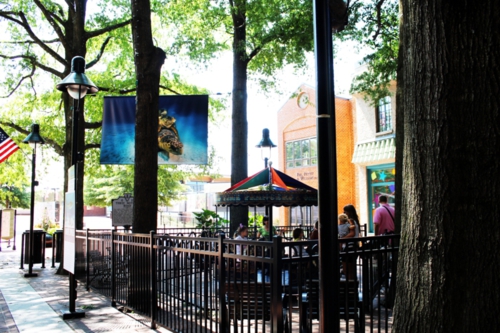 One of many blocked off dining areas in the center of the Mall.

At the eastern end of the Mall is an outdoor amphitheater that hosts many shows, both local and national. There was a small brass band playing when we strolled by it the next day. 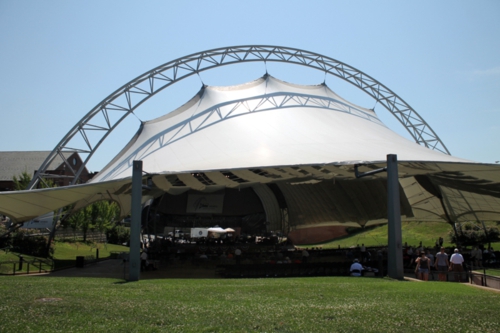 I found the large slate chalkboard much more intriguing, however. It’s Charlottesville’s monument to free speech, and anybody can write anything they like on it. Even the First Amendment engraved on the wall is not off limits.

You can barely make out the engraving beneath the layers of chalk. 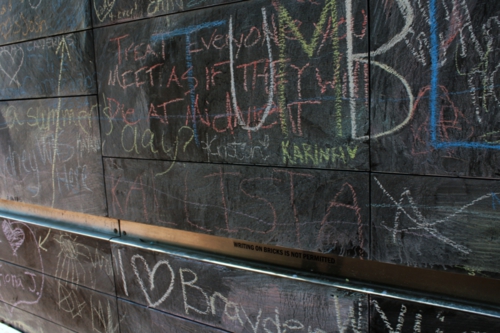 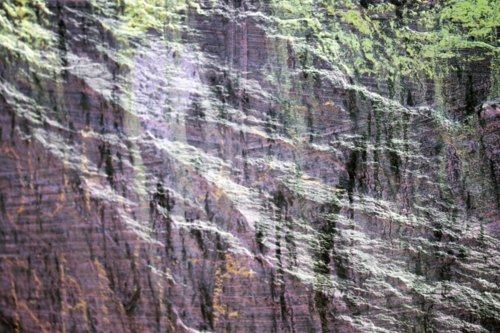 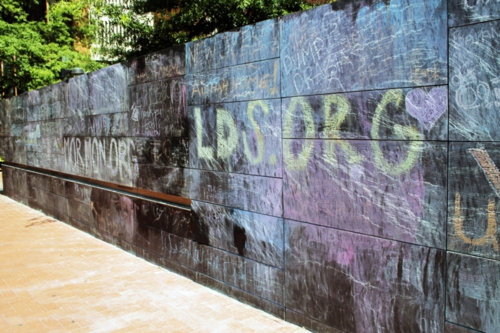 The Mormons claimed a fair bit of the wall that week.

But most of those pictures were taken the next morning. That first night, dessert was on the agenda. We went to Splendora’s gelato café (317 East Main Street). 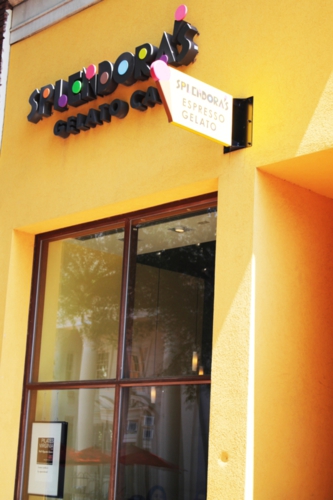 I wanted a small, which comes with a choice of two flavors. 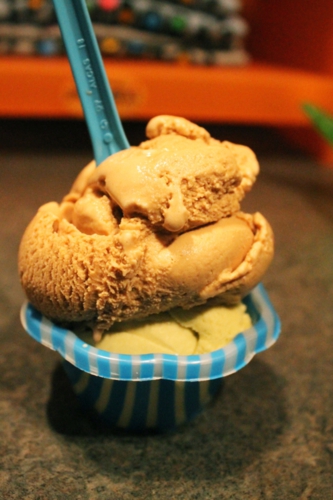 Yes, that’s a small. I highly doubt a large is ever necessary. On top is Mexican coffee. It was bold and bitter, which is how I like my coffee but not necessarily how I like my ice cream. However, the pistachio beneath it was heavenly. It could have convinced me that it was a butter or caramel gelato instead, because those were the first impressions I had of it. But they eventually gave way to a luxurious pistachio flavor. It’s definitely rich and definitely worth it.

When we finished dessert, we were surprised to see how windy it had become. Then the power went out and a generator kicked on. Like most of our compatriots, we decided to wait out the freak thunderstorm in the store and we waited … and waited … and waited. It wasn’t just a thunderstorm but the derecho that hit the Mid-Atlantic states in June! We headed back toward our hotel amidst downed trees and missing streetlights. The hotel had also lost power, and it had no generator except for emergency lights, so we headed up eight flights of stairs to bed in the pitch dark. I do always say I want an adventure.

The next morning we were still powerless, as were hundreds of thousands of people in the region. But the view outside the hotel was lovely before we headed down those eight flights of stairs. 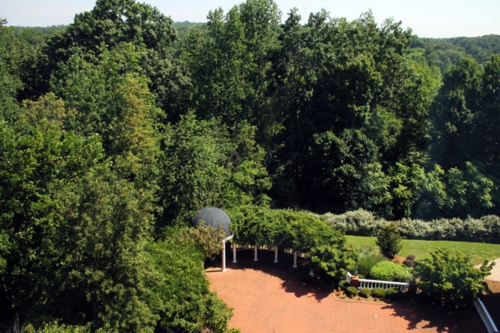 The Downtown Mall was the only area that we knew had power, at least through generators, so we went back there for breakfast and some more pictures. 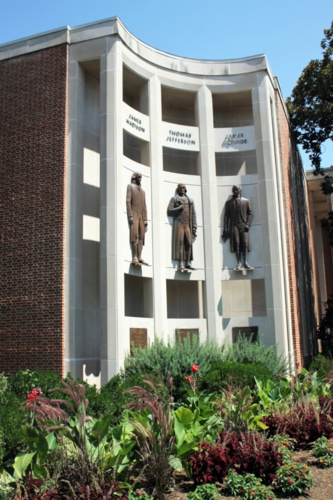 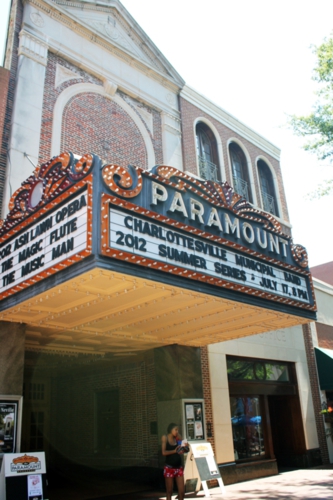 One of three restored theaters on the mall. 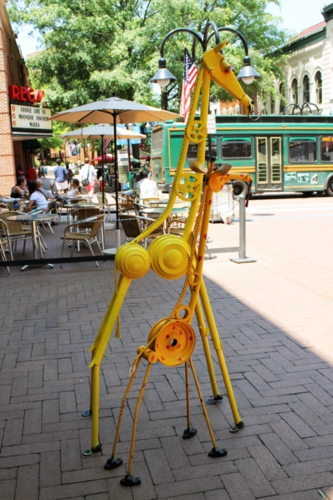 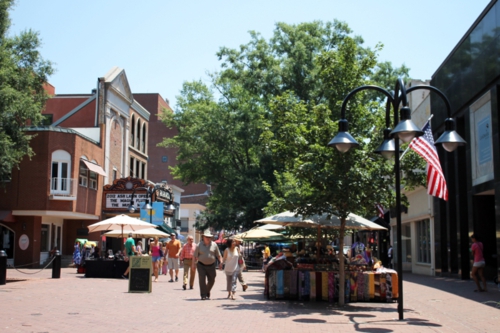 Street vendors. Strangely, they nearly all sold the same clothing.

All the restaurants were serving brunch, so I decided to choose one that was primarily a coffee shop to ensure that I had good coffee—I have priorities. It was Café Cubano (112 West Main Street). 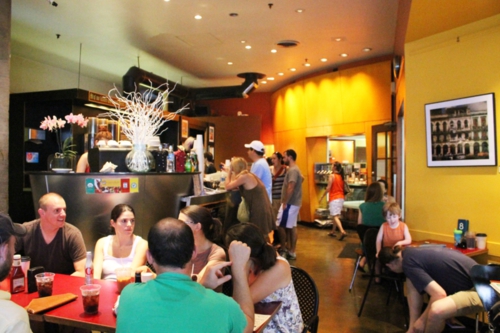 It’s an inviting coffee shop, and there’s outdoor seating as well, but it was super hot and humid that weekend, so we stayed in. Unfortunately, food took around 45 minutes to come out for everyone, but I had a wonderful cortado to tide me over in the meantime. 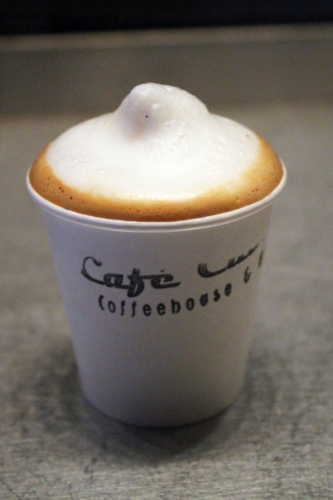 Excellent, excellent foam and espresso. When the food did arrive, it was fairly standard breakfast fare. My husband had an egg sandwich. 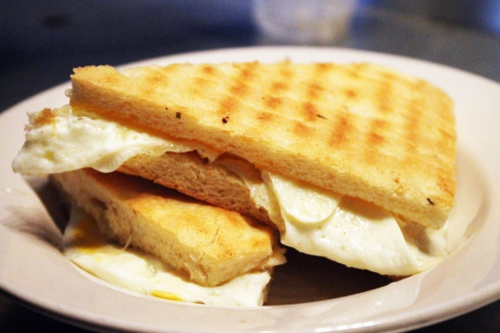 And I went for a caprese omelette on special. 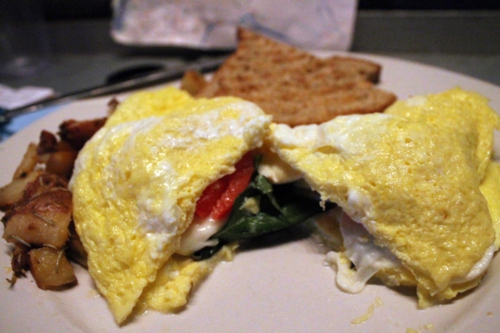 Thick slices of tomato were placed in a folded-over omelette with not enough spinach and too much cheese. The potatoes were worth savoring and coated with rosemary and seasoning salt. I’d return to Café Cubano for the coffee, but the food can probably be passed up.

We were unsure if any of the wineries would have power, but we decided to risk it anyway—I just couldn’t stay in Charlottesville without getting out into the countryside a little. And a beautiful countryside it is with mountains in the distance and plenty of greenery all around. 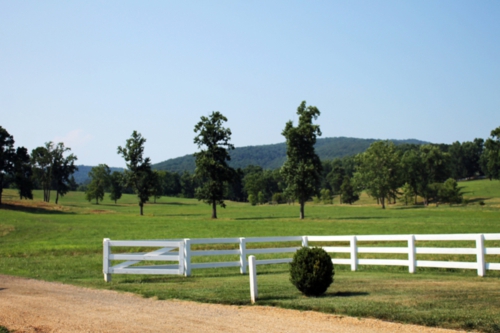 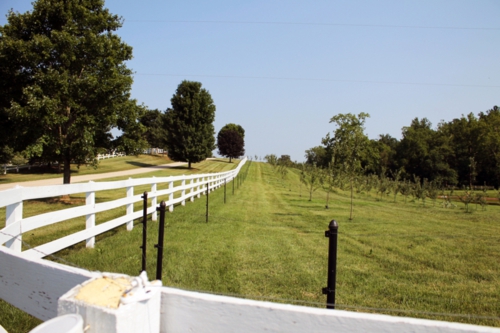 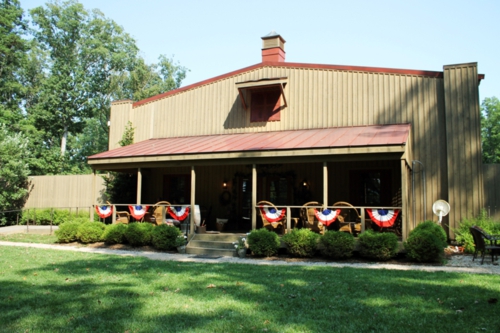 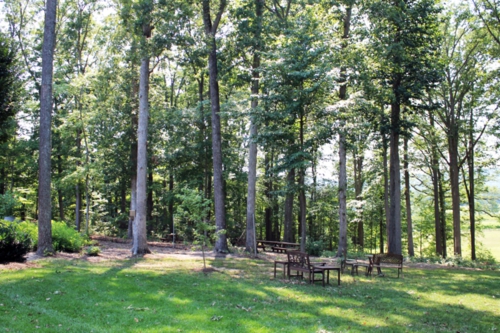 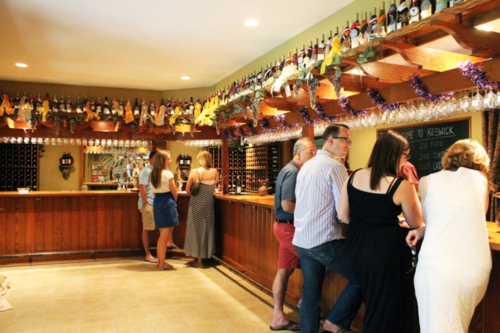 We went home with a bottle of their Les Vents d’Anges Viogner, which is similar to a chardonnay but less overwhelming in terms of butter and wood notes, and a bottle of their rosé, which was quite dry, just how I like my rosé. We also tried to hit up a nearby cidery, but they were closed for a wedding. Next time!

In the next Charlottesville blog, we will have an amazing dinner at L’Etoile, drink the night away at the Whiskey Jar, and then recover from drinking with breakfast at the Blue Moon Diner the following morning. See you then! For more Charlottesville pictures, head here.

2 thoughts on : Charlottesville Blogging: Downtown Food and the Downtown Mall