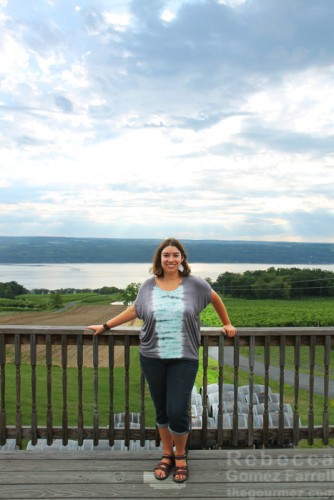 Me at Chateau LaFayette Reneau’s deck.

At the annual Wine Bloggers Conference (WBC), one late afternoon/early evening is dedicated to an excursion out of the host hotel and into the wine region itself. Where we bloggers go is a mystery; each tour bus heads to a different location for a wine tasting and dinner, and just where we will end up isn’t known to us until the bus gets going. For WBC15, the moment of truth came for my bus when Brittany Gibbs, tourism and marketing manager for the Watkins Glen Area Chamber of Commerce, stood up and introduced herself to the group along with Bill Green, a local historian.

Yes, that means Watkins Glen on the southern side of Seneca Lake was one of our primary destinations and I…well, I wasn’t that excited because I’d never heard of Watkins Glen before. Learning it was home to the Watkins Glen Grand Prix and Watkins Glen International…well, that also didn’t do much to excite me as I have absolutely no interested in car racing or in cars period, to be honest. But that didn’t stop me from being amazed by the brain of Bill Green, who I’m pretty sure knows every detail of every race at Watkins Glen since the first one in 1948. That man is impressive!

Admittedly, my attention was mostly on the views from the bus— 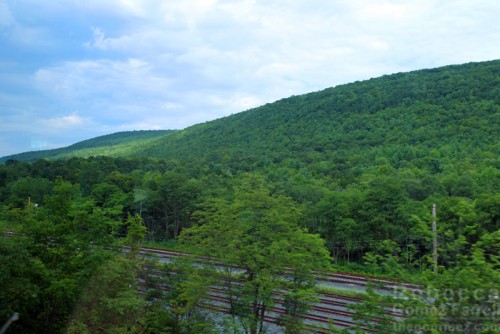 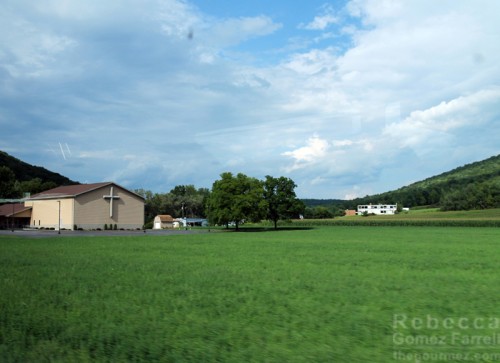 –as we made our way to our first destination. Brittany’s enthusiasm for all things Watkins Glen was infectious, so I believed her when she said we absolutely had to visit the Watkins Glen State Park’s gorge, an itinerary item that she fought to make it onto our packed schedules. And boy, am I glad she did. 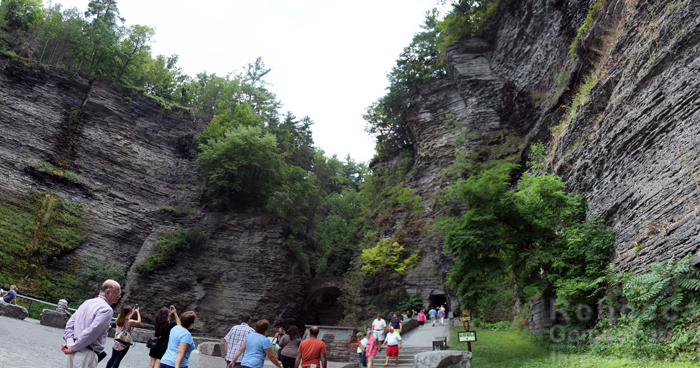 This geologic wonder first opened in 1863 and became part of the New York State Park system in 1924. The shale, sandstone, and limestone rock was beautifully hewn by a stream during the Ice Age. We only had about twenty minutes, so Ranger Joshua Teeter led us from the main entrance, up the passage through the entrance tunnel, past the Sentry Bridge— 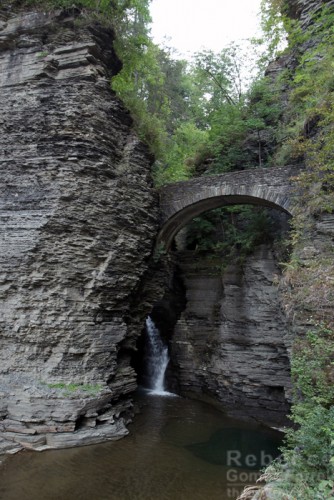 –and to an outcropping over the gorge with a tremendous view. 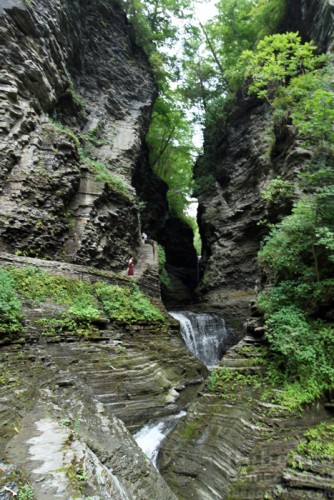 Ranger Teeter gave us a short history of the park, we took in as much of its splendor as we could, and then we were off to our eastern Seneca Lake destination for the rest of the evening. A WBC wine excursion (here’s mine from last year, too) is more like a microcosm of what a day trip to a region might entail, so if I had had more time, and plenty of water for a very humid August, I would have loved to explore the two-mile Gorge Trail and the 19 waterfalls it encompasses at my leisure. 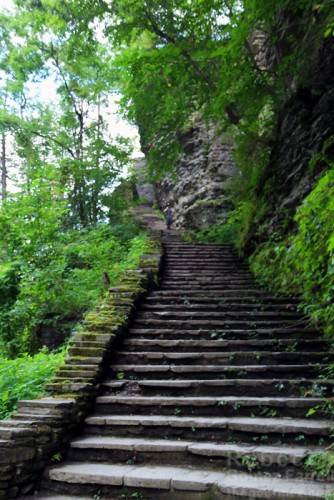 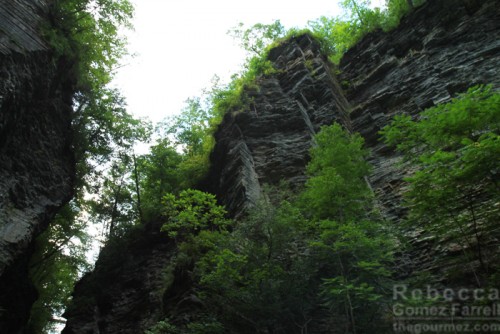 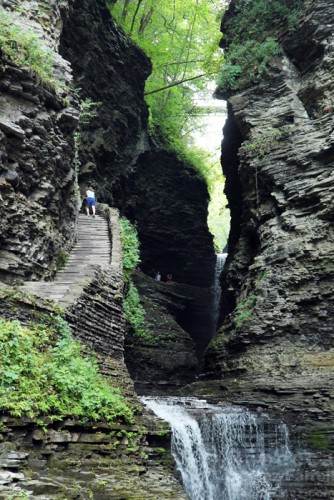 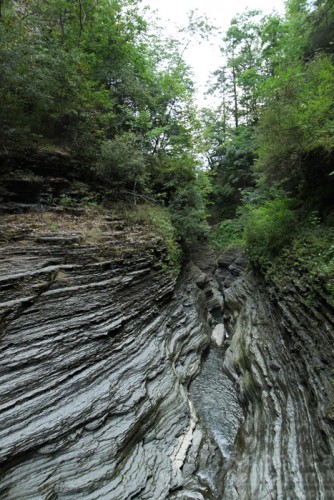 The winery feted our group of about fifteen wine bloggers for the evening, and what a great job they did! 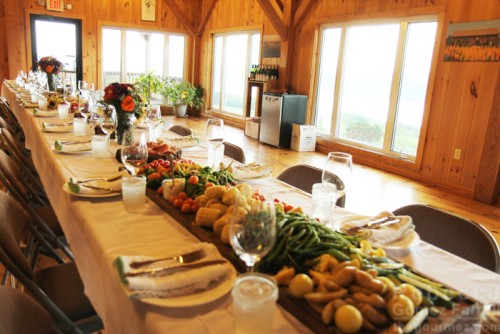 This lovely winery and inn is located on the southeastern side of Seneca Lake, where its first vintage was produced in 1986 using newly planted vinifera grapes. Before diving into that dinner table, we started with not a cocktail hour but a wine tasting and cheese hour, sampling selections from several of CLR’s neighboring wineries and from Sunset View Creamery. 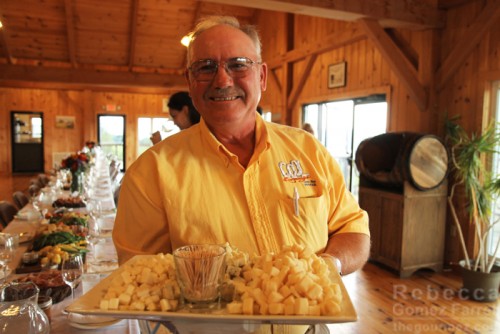 Sunset View operates out of Odessa, NY, where anyone can take a weekend self-guided tour of their Hoffarms Dairy. It’s not every day that a monterey jack cheese is worth noting, but I loved Sunset View’s version with chive and dill, which made the cheese’s natural property’s shine.

This was also when I discovered the great wines from Atwater Estate Vineyards. Many of my fellow bloggers adored Atwater’s sparkling 2010 Cuvee Brut— 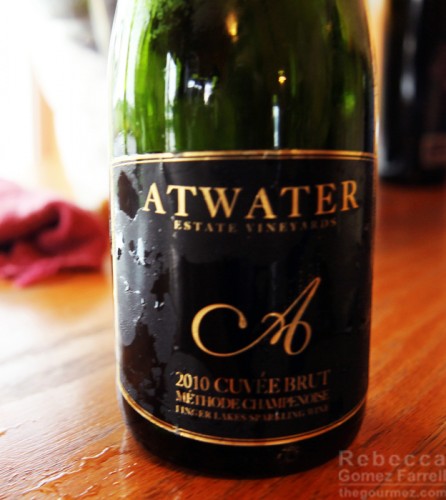 –but for me, the 2007 Dry Riesling was their star. I already exclaimed over it in my most memorable wines of WBC15 post, but suffice it to say I can still remember the image of French toast custard it conjured for me.

I didn’t try the wines from the three other vineyards until dinner because the sunset off the lake was too enticing—sometimes my photog side wins out over the wine blogger.

Those storm clouds contributed to some great shots, even if the short showers scared us inside a few times! But all good things must come to an end…only to be joined by other good things: dinner! 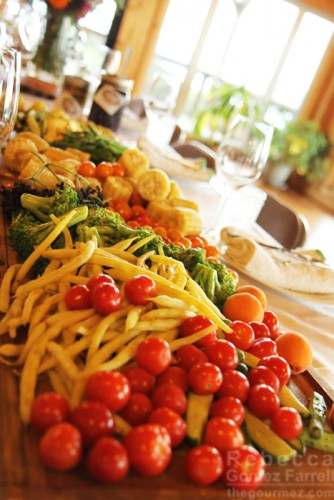 I’ve written about master sommelier, winemaker, and grillmaster extraordinaire Christopher Bates of Element Winery already, but this time, we got to experience the equal gifts of his wife, Isabel Bogadtke, a hospitality maven, winemaker, and chef. 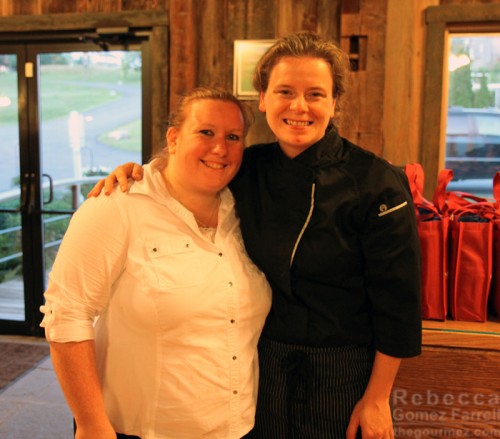 Bogadtke with her assistant after the meal.

Bogadtke prepared a feast for us of ingredients entirely from the Finger Lakes, and she showcased those ingredients masterfully by treating them as simply as possible. Our opening cornucopia of foodstuffs included the most flavorful apricots I’ve ever had, delicious wax beans sautéed briefly with red pepper flakes, tiny elderberries, and charcuterie among many other selections. 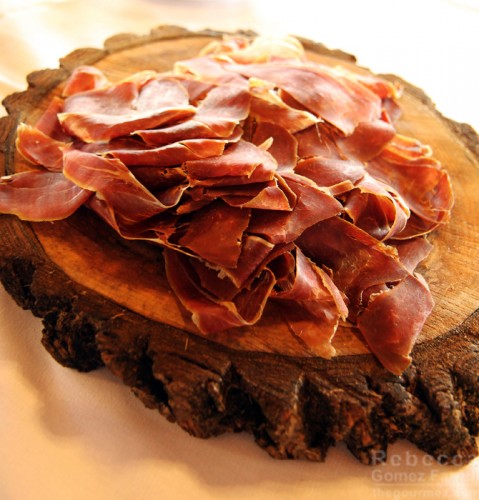 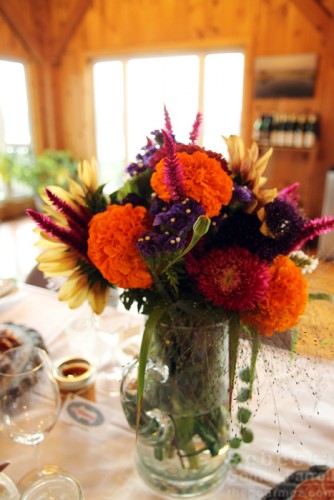 The bread was delicious, as were the accompanying preserves and pickles, all homemade. The pickled spiced plums were especially memorable. We ate so much during that bountiful first course, we barely had room for the second! But with time and wine comes an appetite, and we had plenty of wine to choose from. I was seated right next to Red Newt Cellars’ winemaker, Kelby James Russell, so naturally I tried his 2007 Viridescens, a cab sav, cab franc, and merlot blend. 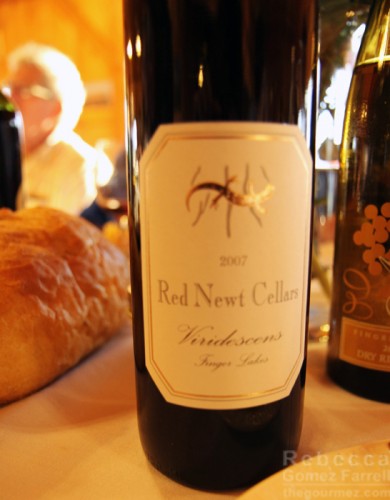 Plum and coffee are what I remember from that wine and a deep, rich color. I also remember a fall-off-the-bone chicken leg confit wonderfully seasoned and a delightfully bright farrow salad.

Fulkerson Winery was also at the dinner, but I didn’t get to their wine that evening. I did, however, recently have their 2014 Juicy Sweet Riesling and found it quite fun for a dessert wine:

And now, the @FulkersonWinery Juicy Sweet Riesling! The name is apropos for a dessert wine. #FLXwine #winechat pic.twitter.com/v3cRjFv0zN

I also didn’t take notes on CLR’s wines during the event, but during the WBC15 red wine liveblogging session, I loved their 2013 Meritage, which prompted some of my more poetic tasting notes in a while: 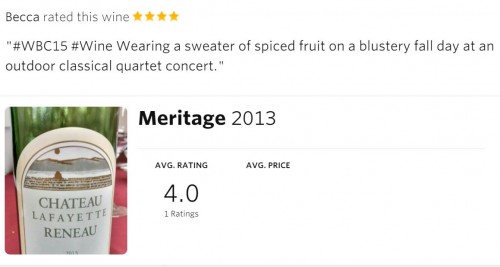 No dinner is complete in my book without dessert, and this one did not disappoint. Bogadtke sent us off with a Nutella panna cotta that I devoured the next afternoon. 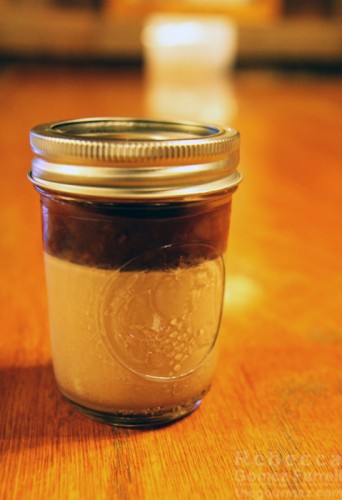 Paul Marcellus, owner of the Colonial Pottery & Creamery, also provided us with a scoop of his vanilla ice cream that was a pleasure to eat—being as I usually find vanilla the height of boring, that’s high praise. 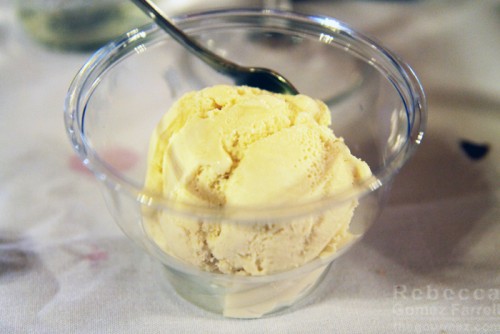 Marcellus was adorably unassuming as were most of the winemakers and local chefs I met over the four days of WBC15. They’ve nearly all learned from, trained with, and worked together in one capacity or another. Rather than a spirit of competition, that fosters a palpable sense of shared pride in the wines and foods they’re producing and the directions they’re taking the Finger Lakes culinary industry in the future. I look forward to watching where that future leads the region.

Maybe from this vantage point.

3 thoughts on : A Sampling of the Perfect Watkins Glen and Eastern Seneca Lake Experience