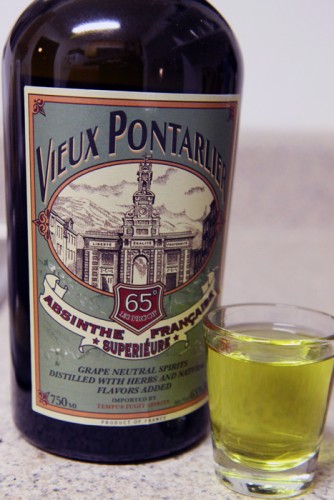 Grown in the same region from which absinthe adulation reached its zenith during the American Prohibition and wormwood has its historic home, Vieux Pontarlier comes in with high expectations.
Its bright yellow-green coloring derives from, I’m going to guess, the “natural flavors” that gather in the bottle in addition to the herbs and grape spirit. 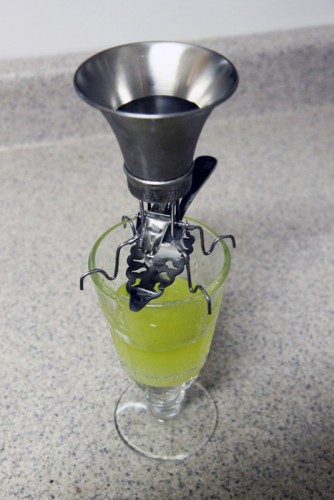 Unlouched, it’s mild in alcohol on the nose and bears wormwood, anisette, and bamboo scents. It’s easy to sip straight—as easy as a 130-proof spirit can get. Air bubbles on the tongue and again, that bamboo and anisette. Wormwood is not as noticeable in tasting.

I tend to like my absinthe with sugar, but I’d stop at about 2/3s of a sugar cube for this one. It’s naturally sweeter than expected. I did 4 ounces of water to 2 ounces of absinthe. 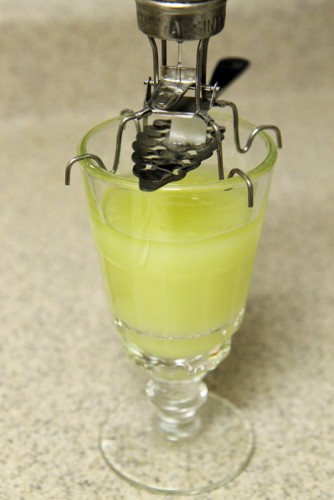 The smell after-louche is more strongly anisette with a woodsy shell. It’s very drinkable. The anisette forms its core—there is no way you’re getting a non-licorice lover to enjoy this absinthe. Hints of dandelion stem swell up and disappear in a blink—yes, I know what dandelion stems taste like. The absinthe settles into the bamboo, a soft woodsiness that invites you to linger longer.

Vieux Pontarlier absinthe calls forth the green fairy, but she refuses to show off all her tricks.

Michael at Drink Up NY

If you love pure dark licorice candies, then you will love this. This is the dessert of absinthe for those who love licorice as I do. Wonderful.

After three glasses on three different days, I think this is a very good absinthe. I don’t think it is particularly remarkable but it is quite pleasing. It is pretty in glass both before and after adding water. The louche is pleasant. The mouth feel is a little thin but certainly nice enough. The Wormwood jumps to the forefront but it’s not the most pleasing flavor, more bitter than floral. The finish, instead of lingering, fades away quickly and it doesn’t really beckon for another sip. Certainly it is a well-made absinthe and deserving of consideration. It’s very good, just not really remarkable.

The color out of the bottle is a perfect peridot with no debris or haze. It smells alcoholic. A bit minty with some anise, some perfume. Grassy. The louche starts slow and then explodes. Thick, opalescent green. Beautiful. I expected the aroma to really open up with water but it didn’t. It’s relatively light. Fruity anise with minty wormwood in a good balance. Sweet but earthy. It has a much stronger flavor than expected. Fruity and almost too bright (jangly in fact), yet creamy in texture. Very numbing. Loads of citrus. Wormwood is hard-hitting but tasty. I’m not finding the finish as quick to recede as others have, but rather that it’s unremarkable and indistinctive. More of the same, just paler and thinner. As it fades the wormwood sort of begins to taste like dill. I’m enjoying this but it’s like playing guitar on a brand new set of strings. Some people like that but I find it irritating, buzzy, and piercing. It’s not a deal-breaker but it definitely impacts my ability to enjoy its best attributes.