The Hospitality of the Finger Lakes—and Other Reasons to Visit

Shh, don’t tell the fine folks who run the Wine Bloggers Conference (WBC), but some of us bloggers write about more than wine! Which is why it was exceptionally pleasant to attend this year—the folks at the Finger Lakes Wine Country Tourism and Marketing Association, Corning Enterprises, and the Elmira Corning Airport sure know how to make visitors feel welcome and appreciated! And while doing it, they gave us a peek into the eats, drinks, and sights of this picturesque region of New York State.

It’s fair to say I felt wanted at the Elmira Corning Airport from the moment I stepped off my second flight from Denver. I knew from other bloggers’ tweets that there was a welcome sign for us–

–but I didn’t know I’d have my first wine tasting right off the plane!

Not only that, but Ann Crook, director of aviation at the airport, was there in person to make sure those of us using the free shuttle service they provided to the Radisson Hotel Corning, a twenty-minute drive, didn’t get lost. Now it’s a small-enough airport that getting lost would be a challenge in itself, but the hospitality they provided at the airport set the stage for the days to come. 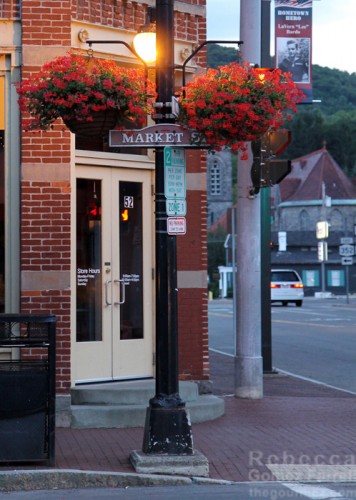 But those blocks are full of brick-lined sidewalks, romantic lampposts, and plenty of places to eat, drink, and shop for Corning specialty items. This historic region can boast many of those: salt, Corningware, glassblowing, fiberglass—they have no shortage of manufacturing accomplishments to be proud of! Community members gathered by the clock tower on a Thursday evening for free music, making it clear that small town does not equal vacant town in this case. 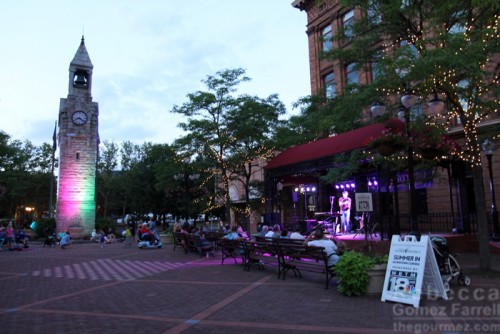 The reception featured a number of fancy nibbles from local restaurants and companies as well as wines from the Keuka Lake Wine trail. The Corning Area Chamber of Commerce also supported the event, showcasing to me how well these organizations work together so they can all advance the area’s reputation.

During the reception, several of the Gaffer District’s businesses made me wish our schedule allowed more time for exploring the city—and by exploring, I mean eating. From bloggers arriving earlier, I’d already realized Hand and Foot (69 West Market Street) was a restaurant not to be missed, and the Hippie Be Good sandwiches they offered us were phenomenal in terms of crunch and contrasting tastes. 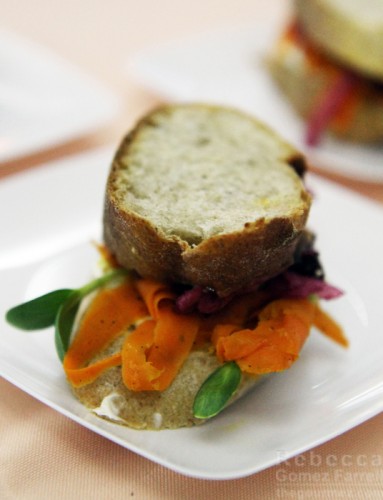 It has goat cheese, smoked carrot, radicchio, mango and jalapeno chutney served up on rye sourdough bread, and I seriously think it hit every single type of flavor profile there is.

Another delicious dish came from the Cellar (21 West Market Street), which featured farm-fresh peaches over an artisanal green salad with pumpkin seeds and a soft, white cheese. 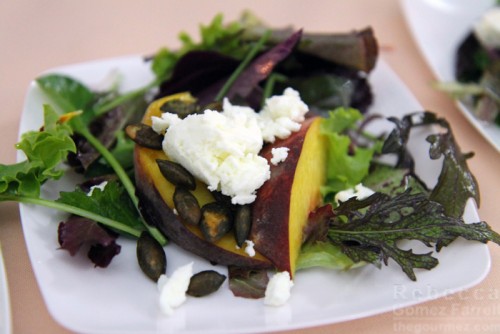 I do not say artisanal casually in this case—I’m not sure I’ve ever had greens that impressed me as much as these did with one bite. They were unusually bright and bursting with an almost sweet earthiness. I had to ask and learned they’re sourced from Remembrance Farm in Trumansburg, an organic and biodynamic specializer in salad greens and root vegetables. I’m as impressed by those greens as I am by the Cellar’s chef & owner, Michael Lanahan, for having the good sense to treat them simply.

Lastly, Poppleton Bakery & Café (23 West Market Street) was one of several tables serving dessert, but their red wine cupcakes, developed especially for us, were the most memorable of the bunch. 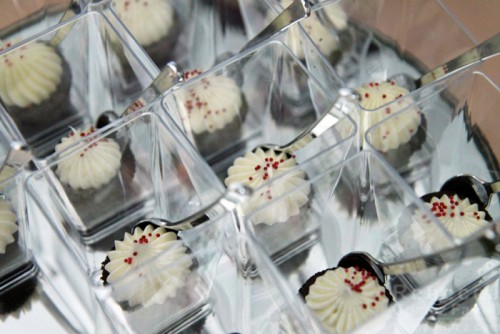 Adding red wine to a red-velvet-style cupcake made them especially moist and richly layered. Luckily, Poppleton decided they were good enough to add to their regular offerings as well, so you can try them out at their store!

What I needed just to make it back to the hotel was a little bit of a kick, so I stumbled over to Soul Full Cup Coffeehouse’s (81 West Market Street) table, where they offered both hotel-sized bags of grounds (genius marketing! Or it would have been genius if our coffee makers weren’t the pod variety) and affogatos with Dippity Do Dah’s (58 East Market Street) vanilla ice cream from the next table. If you know me, you know I don’t say no to an affogato. 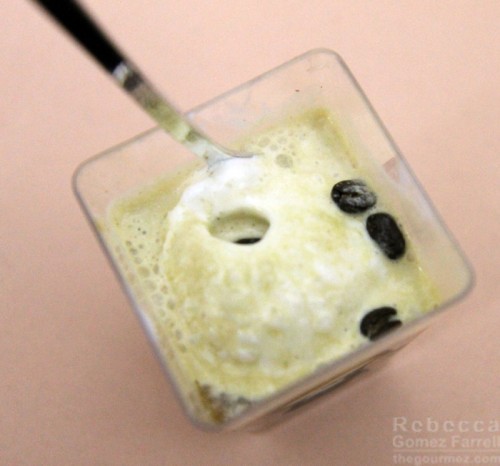 Oh, the bliss of ice cream melting into espresso after you’ve been travelling eight hours!

As most WBC15 attendees would agree, the coffee situation wasn’t the best during our weekend, so I also managed to make that hotel coffee sample work out a few days later.

Don’t ask how. You don’t want to know. But man, it was still better than anything else in walking distance.

I do have more pictures of the opening reception and downtown Corning right here, if you’d like to take a gander. Click on this one for my daytime downtown Corning views along with some images from the glassblowing demo at the Corning Museum of Glass…

The best examples of how well the Finger Lakes organizations treated us come from our two nights out at two Corning museums in easy walking distance of the Gaffer District. 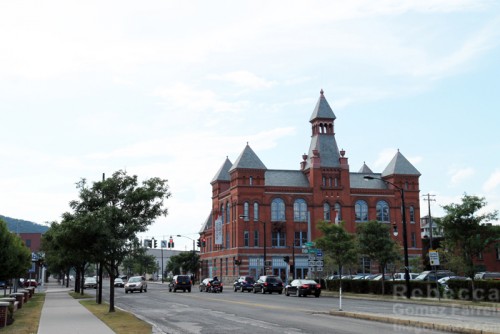 The Rockwell Museum hosted our Friday night reception, which our tour guides were wise enough to take us straight to at the end of our excursions to Seneca Lake; otherwise, we’d have been too tired to meander over the couple of blocks from the hotel! And that would have been a shame, because the Rockwell Museum hosts a really interesting collection of primarily Western art, beginning with the buffalo butting out of the exterior wall! 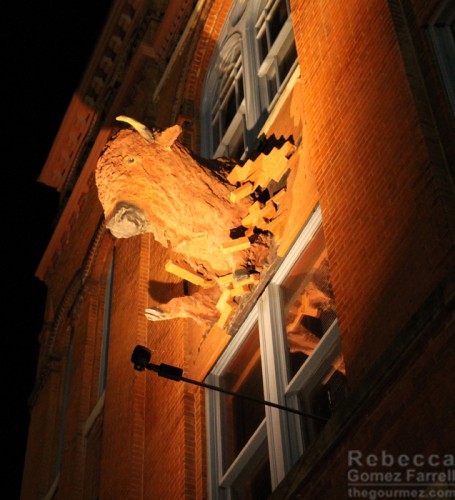 The collection was gifted by Bob and Hertha Rockwell, department store owners from the Corning area, who worked with the Corning Glass Works to restore the Old City Hall in 1980-1982 to house the museum. 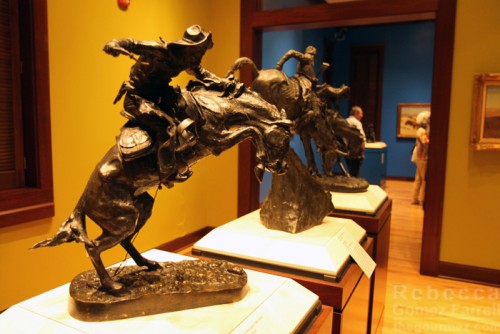 Of course, between those iconic images of the West, wine tasting stations and a live band greeted us. It was a truly pleasant end to an evening during which, once again, the Finger Lakes’ hospitality shined through. The earlier part of that evening—my excursion to the Watkin’s Glen area and Chateau Lafayette Reneau, will be my next WBC15. Click here for more pictures of the Rockwell Museum.

The next night, our wine pairings dinner and the Wine Blogger Awards were hosted by the Corning Museum of Glass, which was amazing inside and out.

Our night began with a glassblowing demonstration, which happens several times a day during regular operating hours. 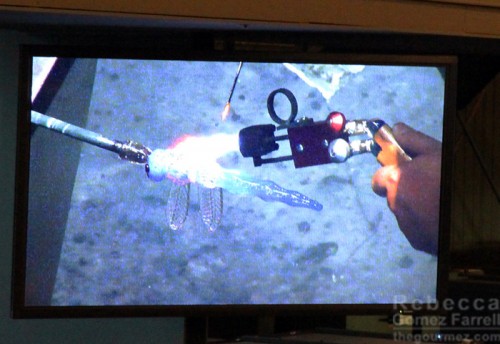 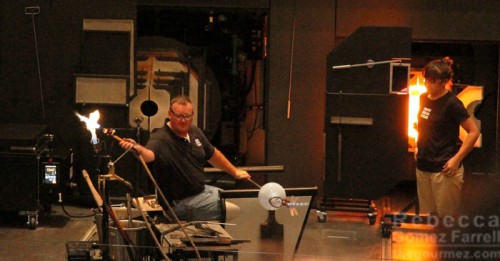 Watching glass be spun is far more titillating than I expected, that’s for sure! And catching quick glimpses of the modern art exhibit and the gigantic gift shop on the way to the banquet room was enough and then some for me to make up my mind to use my complimentary ticket to return Monday morning to appreciate the museum, when I’d have a couple hours before my flight.

A few hours were not enough! I made my way through the Contemporary Art and Design floor first, where I gaped at the large installations and plotted how I could smuggle a few of them out (I couldn’t). 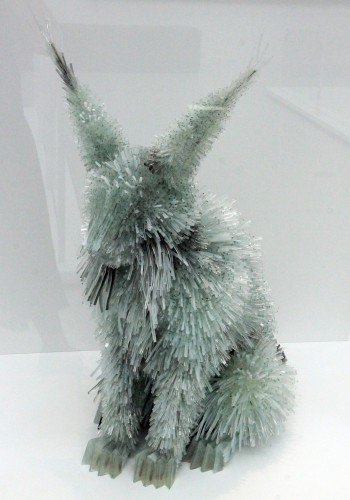 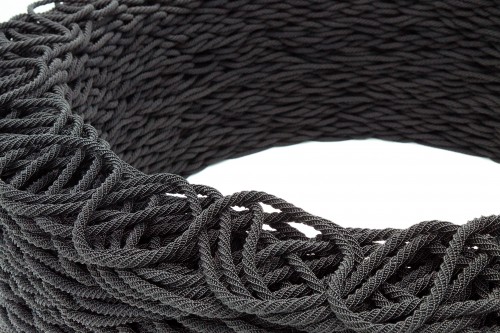 And then I went zoomed through the Innovation Center that details the history of glass-based discoveries, taking us from fiberglass to optical fibers with a number of interactive exhibits. 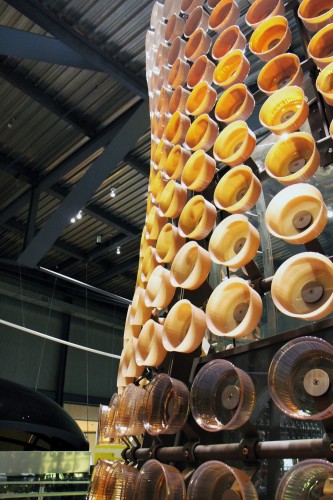 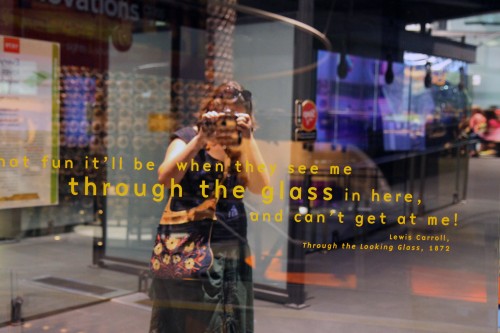 No trip is complete without a self-portrait…in glass! 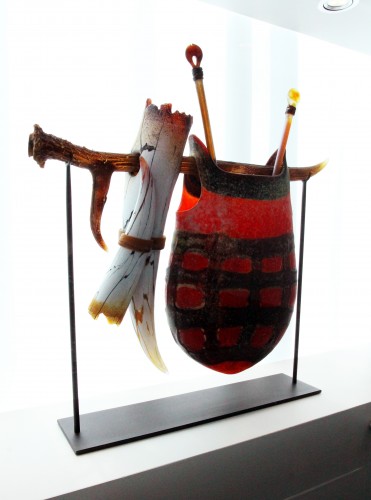 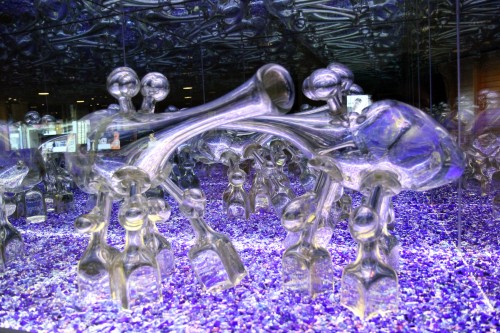 …and with fifteen minutes to spare, I stumbled into the 35 Centuries of Glass display. WHICH IS GIGANTIC. 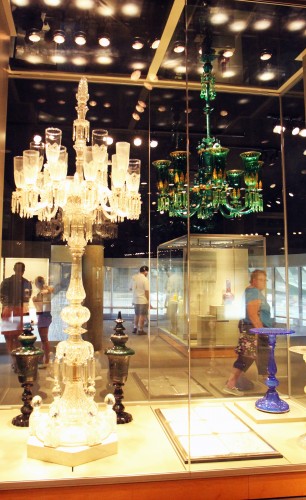 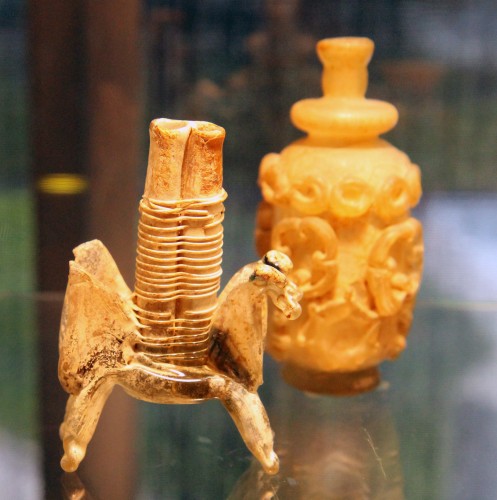 I barely had time to get through three centuries before I realized I needed to hoof it back to the hotel for yet another shuttle ride provided free of charge from the Elmira Corning airport, during which yet another incredibly friendly driver regaled us with tales of his recent fishing trip and the camaraderie amongst the airport staff. Find more pictures from the Corning Museum of Glass here.

What’s that? A whole post about the WBC without a single wine descriptor? I warned you at the start—Woman Cannot Blog on Wine Alone. She occasionally has to enthuse about the exceptional warmth extended her way from the people of the Finger Lakes instead, whether that warmth comes through in small-town charm, well-sourced and prepared food, a friendly banner, or a free ride at the end of a long weekend. Thanks to all of our Finger Lakes hosts, and extra special thanks go out to Laury Ellen Poland, president of the Finger Lakes Wine Country Association, for wrangling that warmth out of so many different organizations in the area. 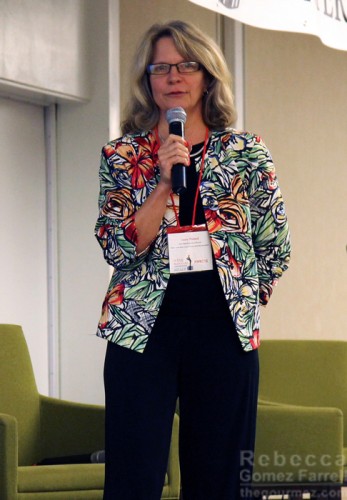 I’m not sure how I didn’t catch a picture of her smiling, because I’m pretty sure she didn’t stop all weekend. This wine blogger appreciated every bit of that thought and care, and if you visit the Finger Lakes and Corning, NY, I don’t think you’ll have a far-off experience.

5 thoughts on : The Hospitality of the Finger Lakes—and Other Reasons to Visit