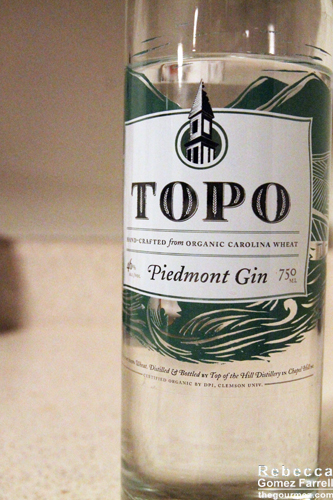 I have mentioned this gin before on this blog, when I took a tour of the distillery. But this is the first TOPO spirit I’ve had my hands on a bottle of and thanks go to Esteban, TOPO’s spirit guide, for the parting gift at my farewell from North Carolina. At that tour, I was impressed by how soft the Piedmont Gin’s notes were in comparison with other gins that I often find overwhelming. So you can bet I’m excited to give it a thorough tasting. 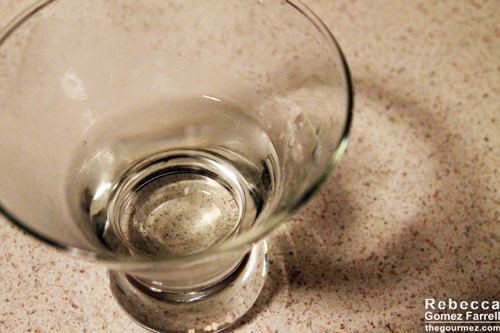 Nose: A sap-covered pine cone comes to mind, hinting of sugar with the juniper. Spices are present in modest levels; I can’t distinguish between them but I can appreciate their evening properties. Allspice pokes its head out eventually. No major alcohol heat. Citrus rounds out the smell.

I chilled the shot before sampling because I can only barely handle gin on its own – I am not a gin martini drinker. So you should recognize that its flavor profile may be dulled in this review, but hey, at least I drank it at all. Mild alcohol tingles, then spices hit my lips: clove, allspice, coriander. Those quickly take a backseat to the soft, pillowy upswell of juniper. Mild lemon mixes with that juniper until they both dissolve and the spice comes again. But it’s different now, brighter, more like celery seed. The longer I sip, the more the gin reminds me of an oatmeal cookie.

But we aren’t done yet. Let’s try this gin with Royal Rose simple syrups! Why that particular brand? Because they sent me an array of beautiful free samples. 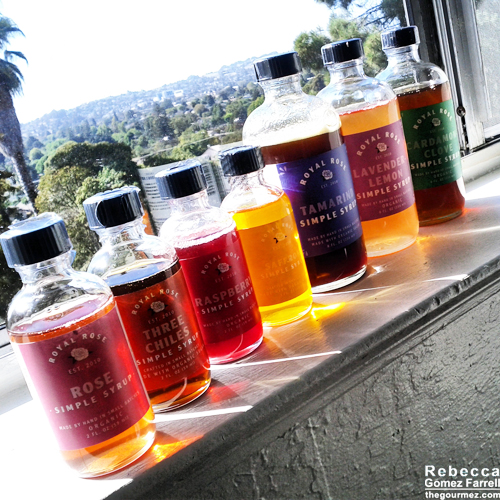 Look how pretty they are! The syrups are produced in small batches from organic ingredients. For this gin, I think berry will be a simple, lovely enhancement. And you didn’t expect me to leave that saffron syrup untouched for long, did you? 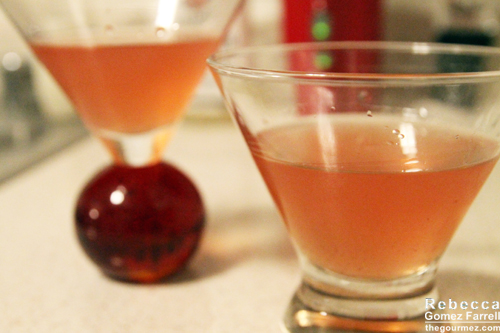 Shake it up, pour it out. Garnish with a lime wheel if you’re fancy. Obviously, I’m not.

Never forget I’m a cocktail experimenter readers, and most of the recipes I share are unrefined. Yet I think I love this combination. It’s in the rare range of gin drinks I can handle, along with several cocktails made with grapefruit juice. In fact, half an ounce of grapefruit juice would probably smooth the Late Summer Ray out nicely. But I don’t have any, so I’m presenting this cocktail as is. The combination of lush saffron with the milder raspberry syrup is unexpectedly delightful. All that natural flavor floating through the gin almost fools me into believing I’ve muddled something rather than just uncorked a few bottles. Give it a try, and let me know if you add the grapefruit. And yes, there will be more cocktails made with Royal Rose syrups soon. I made a rum punch just last night that’s pretty exciting.