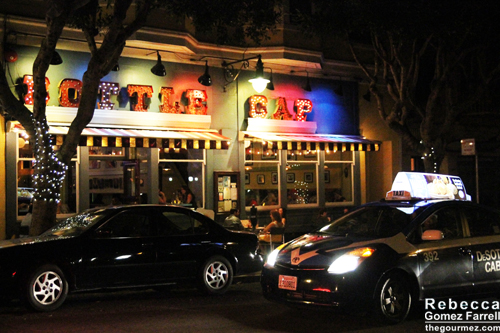 Bottle Cap is whimsical on the outside, full of bright shiny colors that pulled me in right away. Inside it’s just as mod-appealing — crazy art in bold colors adorned the walls, and the blue patterned tables made me smile. 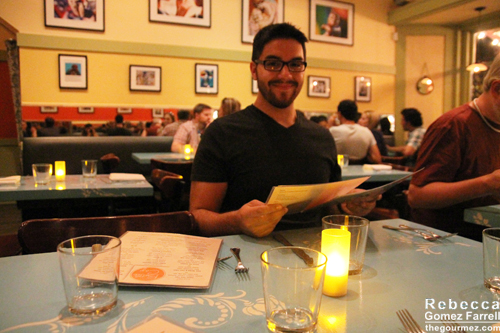 My cousin on his first meal out with me and my camera.

My table for 4 with a reservation was seated promptly. The menu is New American with a focus on ingredients from Northern California. Both small plates and full entrees are options. Two of us tried cocktails from the inventive list. I opted for the Maracuya Sour, being a fan of elusive pisco drinks. 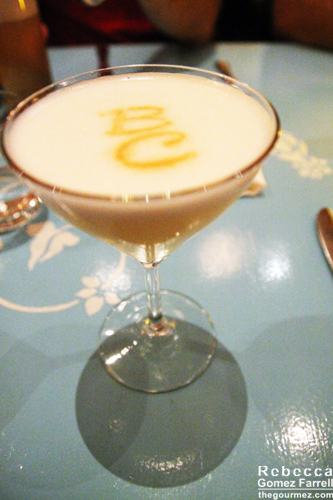 This one was made with Encanto pisco, lemon juice, egg white, and passion fruit syrup, and I loved it. The egg foaminess did a great job of mellowing out what can be an intense fruit flavor, and the pisco shone through all the other ingredients. My cousin enjoyed his Dr. No as well, made with Flor de Cana Dark Seven-Year rum, Smith & Cross Jamaican rum, pineapple syrup, Falernum, Orgeat, lime juice, ginger beer, and bitters. That’s a lot of ingredients! They blended into a smooth punch that did not go overboard on the sweetness.

Based on the ingredients, I think the difference between the “Comfort Zone” and “Entrée” options is whether or not meat is served as a prime cut or incorporated into a dish. My companions all went for entrees, two having the slow-roasted pork shoulder. 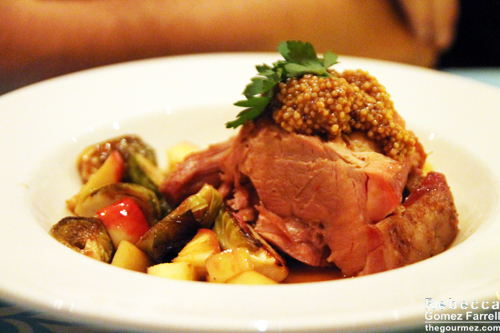 My cousin was especially impressed with the picked mustard seed sauce, and both he and my husband thought it a good dish while I can confirm that the pork was very tender. Diner #3 had the chicken with a take on a phyllo pie, which was really a helping of phyllo strips topped with spinach, ricotta, pumpkin, and spiced walnuts. 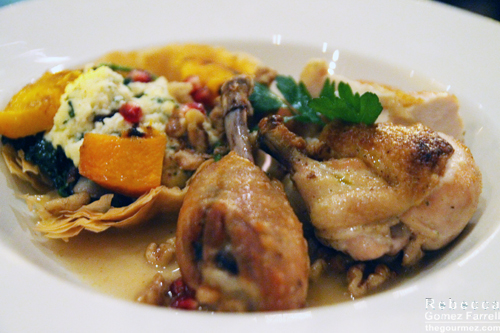 She wished the chicken were crisper, as “crispy leg” was in the description, but she was impressed with the accompaniments and their unique spicing. I agree based on the bite I stole from that side. My own dish was from the “Comfort Zone,” chile-spiked gnocchi with Castroville artichokes, caramelized cauliflower, oven-dried tomatoes, and a white wine cream sauce. 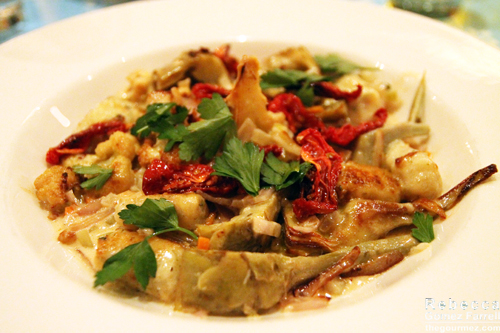 I wanted to love it, but it was plagued with a common problem: individually delicious ingredients that don’t combine well. The artichoke hearts were too similar to everything but the tomatoes, with the result being that I couldn’t really tell any of it apart from a flavor and textural perspective. The tomatoes stuck out because they were the only aspect of the dish that had something different to offer, the sharpness of dried tomatoes in contrast to the creaminess and gentle give of the rest. Each was excellent on its own, but together it was forgettable.

I may not have been sold on the combination of gnocchi, artichoke, cauliflower, and cream, but I did enjoy my meal regardless. My companions had little to complain about, and I’d be happy to return to Bottle Cap again, especially for a drink.