Fire in the Triangle: Battle Market vs. New Southern Kitchen

I was thrilled to again judge a Fire in the Triangle battle, having judged my first last year when NC Competition Dining premiered in the Research Triangle. If you love food and live in the area, then you simply must make next year’s series—it’s too late for this year’s. All the battles have been sold out for weeks!

WRAL is the local media sponsor for the competition, and they already have a great summary up of Monday’s night’s competition between Market and New Southern Kitchen, but I just have to add my own spin.

The competitors await the results.

First, though, I should make clear that my meal was complimentary as one of the evening’s professional judges. Second, I was plied with wine by a fabulous group of dining companions the entire evening. That may affect my opinions. But mostly it affects my dehydration today. Thank you again, ladies, wherever you are!

Diners and judges enter their scores in six categories for each dish, including aroma, execution, flavor, presentation, accompaniments, and the creativity used with the secret ingredient. Diners’ ratings making up 70% of the total score and judges get 30%. We were blessed with two—two!—secret ingredients for this meal, heirloom tomatoes and TOPO spirits. You may recall that I visited TOPO’s distillery last month, so I was excited that their unique, organic, local gin and vodka would be highlighted in these dishes. Making them stand out in a dish was the most difficult part of the challenge, in my opinion.

But I’m getting ahead of myself. Onto the dishes! The first course, by Chef Sokum Slama of New Southern Kitchen, was napoleon heirloom tomatoes with couscous, lobster, and a TOPO vodka and basil beurre blanc. 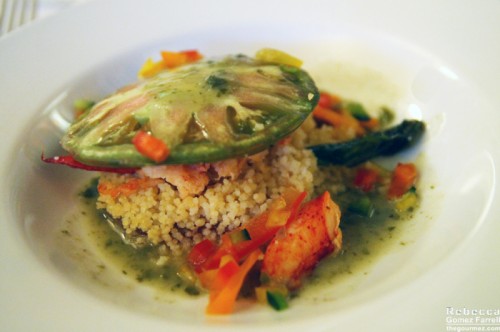 This was a strong start for Chef Slama, using beautiful colors and pulling out all the stops by starting us with lobster. The tomato had wonderful flavor, but the vodka was impossible to pick out. It was Course #2 from Chef Chad McIntyre of Market that probably did the best job of highlighting the vodka. 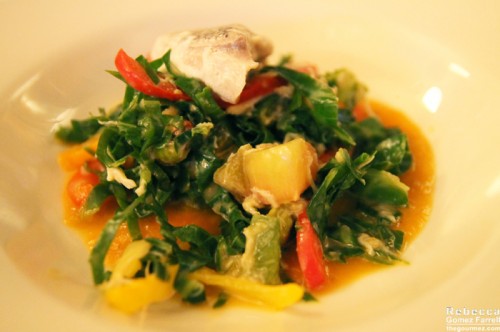 It didn’t quite get my highest score of the evening, but this green tomato and crab salad with poached tilefish and a citrus “Mary” sauce was my favorite for flavor. That citrus sauce captured the spirit of a Bloody Mary effectively, garnering it high creativity scores. The peppers and greens (kale, I believe), were delicious with the sauce, and the fish was perfectly done. Pistachios for crunch are always a plus!

We didn’t know it, but it just so happened that the courses alternated between the chefs for this battle. Which meant Chef Slama prepared Course #3: roasted sheepshead fish with roasted heirloom tomato sauce, potato leek salad, and mango-papaya salsa. 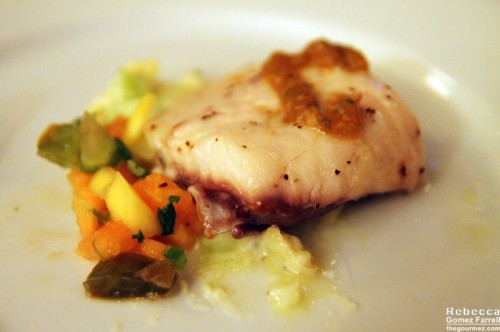 This dish suffered from poor execution, unfortunately. At my table, the portions of fish and presence of accompaniments varied widely—I ended up sharing my potato salad with another diner as did others on the table. That was especially a problem because those accompaniments were the stars of the course, especially the delicately balanced leek and potato salad and the bright salsa. I have no idea where the TOPO spirit was in the dish, but the fish was wonderful. I’m sure that course would be delicious in any restaurant, but it did not excel as a Competition Dining dish. More tomato and TOPO was needed.

The Heritage Farm shredded pork belly with butter potatoes, chimichurri, and TOPO vodka and tomato puree did much better on all those counts. It was the highest-scored dish of the evening. 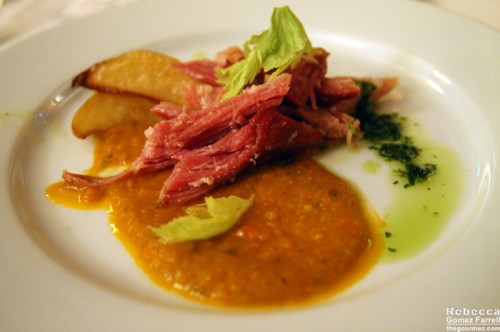 In part, that high score came from knowing North Carolinians like their pork, but this current North Carolinian is sick of pork belly yet had nothing but praise for it in this dish. Its flavor was earthy and light on fat. I was surprised by how much the celery leaves heightened that earthiness, and the potatoes were delicious. Once again, however, both secret ingredients made appearances as sauces and almost seemed an afterthought. That’s why I preferred Course #2 overall.

On to everyone’s favorite course at these competitions: dessert! And I should be clear. Dessert is always my favorite course. Chef Slama offered very creative chocolate-pie cups topped with tomato compote and garnished with saffron crème anglaise. 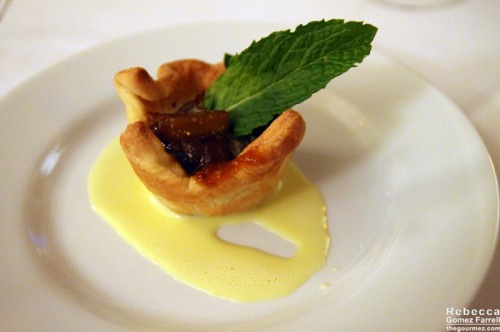 I’m assuming the crème anglaise had TOPO, but again, it was hard to tell. This dish featured one of the best uses of tomato all night, and while I’m not sure I’m sold on combining it with chocolate, most of the other diners disagreed with me, giving it the third highest score of the evening. The thick, smooth, and rich chocolate filling was especially noteworthy. 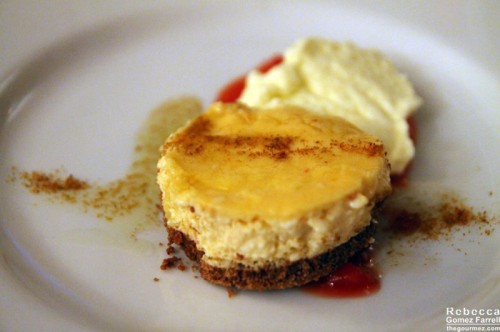 The star of the dish for me was the basil-gin syrup — at last, a dish that utilized the TOPO spirit recognizably! Using tomato in the cheesecake was both unexpected and delicious, and the olive-oil whipped cream made it all a little bit more luxe.

In the end, Market won handily with a score of 21.35 to 17.64, and while it would be dishonest not to note the role pork played in that decision, I also think Chef McIntyre won because the TOPO spirits were clearly evident in at least two of his dishes while Chef Slama did not prominently feature them. 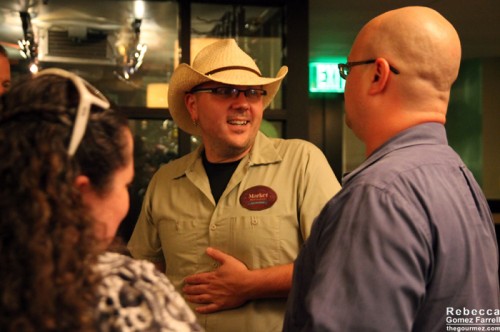 McIntyre in the throes of victory.

I do wish both chefs had been more adventurous in their use of tomato in the dishes. In the savory courses, they were primarily conveyed in sauces with variations only in sliced tomatoes and a chunky salsa. Perhaps that sidelining of the main ingredients is why this was the lowest scoring evening for the pros thus far, though it should be noted that there weren’t as many tomatoes available to use as the chefs would have liked. Or maybe we were just a tough crowd that night. You can get a full breakdown of those scores here. 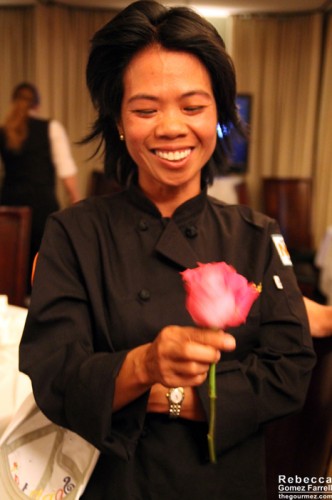 Chef Slama, delighted to receive a flower from one of her sous chefs after the competition.

I should also mention that Gizmo Brew Works, the new identity of the former Roth Brewing Company, was this week’s beer purveyor. 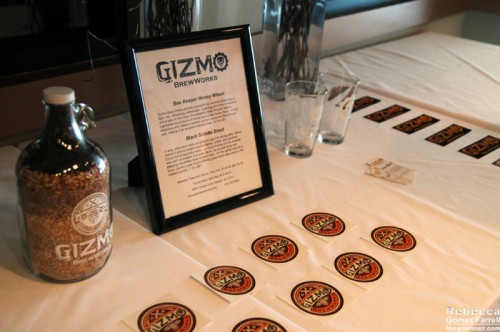 Although I did not try their beer, being plied with wine all night, I enjoyed speaking with their new brewmaster and one of the several owners of the brewery. They are the smallest production brewery in North Carolina, but look for that to change in early 2014 as they crank up production slowly but surely and experiment with new recipes. The Palisade Wasp India Pale Ale was already received well and drank up in the first few weeks of July.

I look forward to rooting on Fire in the Triangle through its August finale from afar. A few of my favorites have already moved on to the quarterfinals, and I can’t wait to see how well they do in the next round. Quarterfinal competition begins next Monday! Who do you think will win?