This highly praised foodie haven from Raleigh celebrity chef Ashley Christiansen was Number #1 on my must list for places to try before leaving the Triangle. And I am super glad I did. It’s a foodie haven for a reason. But I was surprised by how strongly I felt it might not be for everyone else.

Poole’s exterior is nondescript enough to walk right past if you aren’t looking, just glass walls with a simple logo engraved on the door. Inside, the atmosphere is upscale diner: lots of shiny metal, three semicircles of counter seating, and appealing blacks and reds. 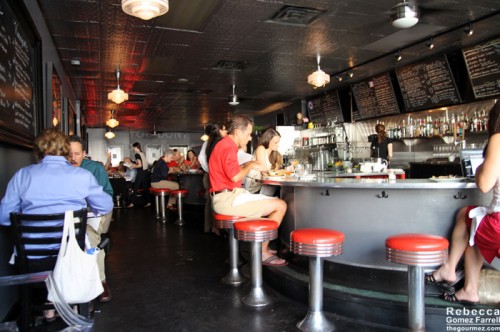 Bordering the walls are their famous chalkboards, where all menus reside. Yes, that’s all menus, including the wine list, drink list, appetizers, entrees, sides, and dessert. 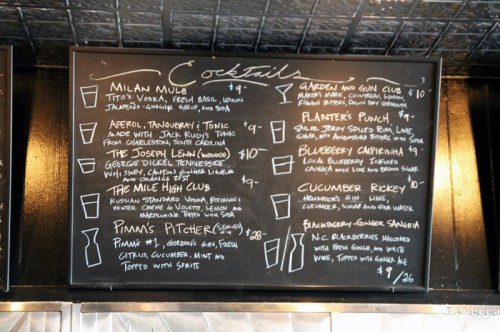 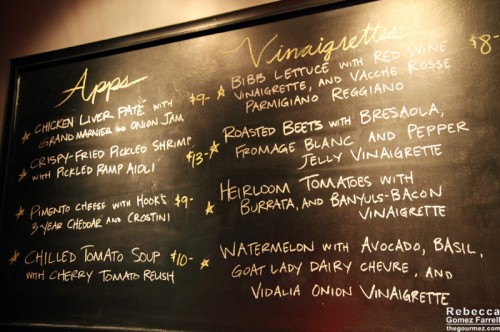 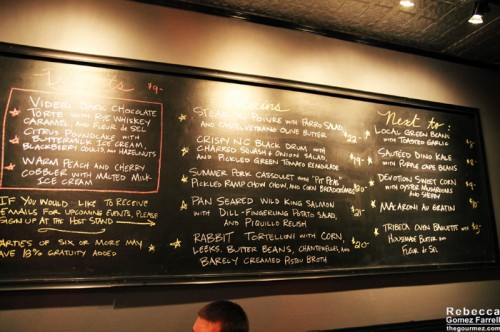 This practice of chalkboard menus is very trendy—one might say Poole’s started it in this area—but most restaurants supplement chalkboards with a paper menu. Not here. You must stand up and walk around to get a good view, which is awkward but barely a blip of inconvenience for the devoted foodie.

Order a cocktail from the bar while you’re waiting for a table. Because you will be waiting for a table unless you arrive before 6:30 on a weeknight as there are no RSVPs taken. This is another common practice for busy restaurants. It gives them one less detail to worry about and adds to their hype with a crowded storefront. 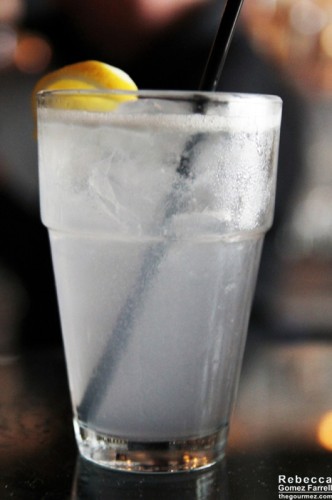 It was extremely well mixed. Crème de violette, like all floral liqueurs, has the potential to overwhelm a drink with its grassiness and perfume. Here, it was added in just the right amount to shine, and the lemon added wonderful sour to the mix. The soda water accomplished a rare feat as well: not watering down the drink, merely giving the other ingredients room to breathe instead. I loved it.

After a fairly short wait, we were seated in the back of the narrow restaurant space. This was when I noted that only two ceiling fans were used for ventilation, creating that hot, sweaty Southern summer feel—trés authentique! But I’m pretty sure any Uncle Hermans among us would dissolve into piles of sweat by evening’s end. The sacrifices we make for delicious food…

I began with the chilled tomato soup with cherry tomato relish, and it profiled those tomatoes better than anything during Battle Tomato at Fire in the Triangle. 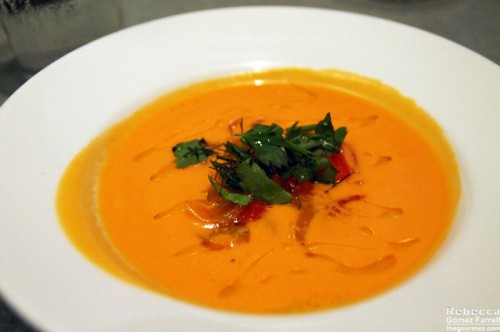 The presentation was beautiful—who doesn’t like artful olive oil drizzling? While I debated the use of parsley at first, I ultimately decided it added crispness to the dish and the olive oil’s layered contribution was masterful.

Friend #1 also had a soup, a special of the day you won’t find on those chalkboards: cream of corn soup with chives. 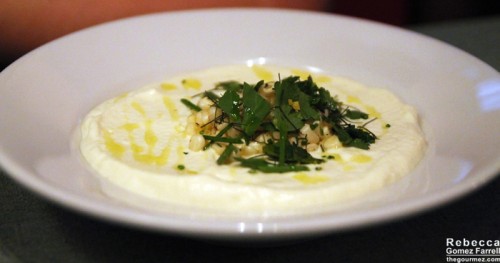 Now that was outstanding, if I can say so from my one spoonful. The texture was between foam and whipped puree, and it was as sweet as sweet corn can be. I was jealous, and I say that having loved the tomato soup.

Friend #2 opted for simplicity as a starter, choosing the baguette from Tribeca Oven with house-churned butter and a sprinkle of fleur de sel. 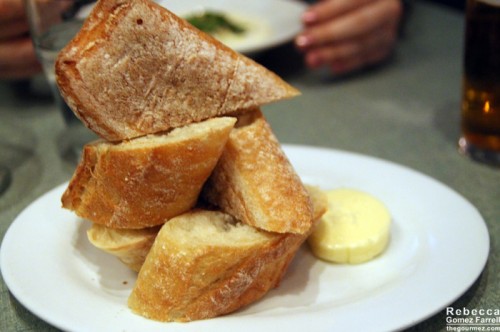 The crust had an ideal crunch that led to the soft, fluffy center. The salt made the butter pop, as it should.

I’ve known from the moment I embraced the Triangle foodie culture that having Poole’s macaroni and cheese was a must. It is rightfully named macaroni au gratin, and we ordered one for the table. 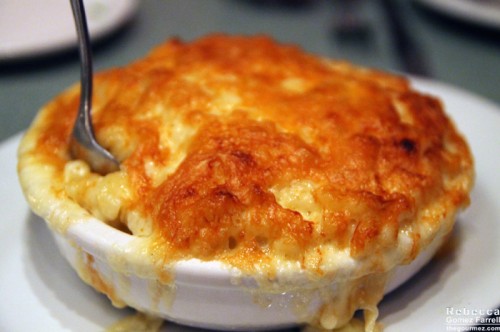 You could smell that cheese coming. The crust on top was the crown jewel, just like the bits of cheese that spill from your sandwich onto the griddle are always the best parts. Sharp cheddar came through loud and clear. The béchamel was smooth and creamy to start, though it did get mealy fast as all béchamel does. We only managed to eat two-thirds of the dish, yet I still regret sending it home with Friend #1 instead of staking my claim.

But we also had entrées to distract us. Friend #1 had the summer pork cassoulet with “pit peas,” pickled ramp chow chow, and corn breadcrumbs. 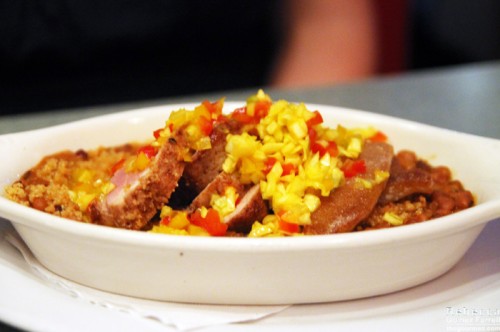 That was the most colorful dish of the evening, both fuzzy and spiky in appearance. She found the pork tender and was surprised to enjoy the peas as she usually does not like them. She noted the next day, however, that her leftover pork was a lot fattier than she had realized the night before.

My choice was crispy black drum fish with a charred squash and onion salad and pickled green tomato remoulade. 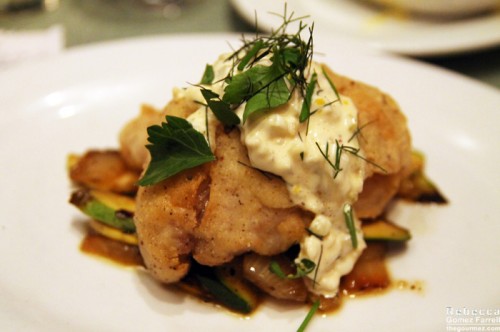 No words of complaint here. All components of the dish were excellent, and the remoulade’s vibrant twist on a tartar sauce was thoroughly enjoyed. The fish had personality, and the charred vegetables were just right.

Friend #2 had another special of the day for her entrée: soft-shell crab with that same remoulade and vegetables with it—perhaps Friend #2 can refresh my memory on what those were? 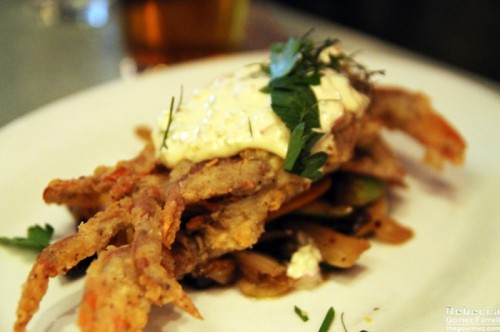 She described the crab as melt-in-your-mouth and also loved the remoulade. She came close to licking the plate but managed to refrain from giving that highest compliment.

By this point, I had ordered a second drink. 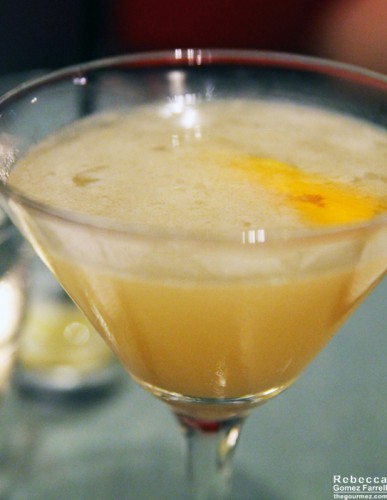 The Garden and Gun Club is made with Makers Mark bourbon, Cointreau, lemon, Regan bitters, and Doolin’s dry vermouth. It packed a punch; order this if you want to be sure you’re drinking. The Cointreau lent strong elements of mandarin orange and tangerine. The drink was quite good, but I found it too much after the subtler Mile High Club. Sip slowly.

Of course, we ordered dessert despite the states of our stomachs. Friend #1 and I both had the citrus pound cake with buttermilk ice cream, blackberry coulis, and hazelnuts. 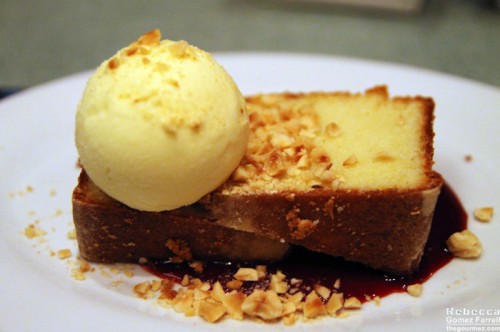 It was average for a dessert at this price point. I didn’t taste any citrus in the dry pound cake, but it combined well with the sweet and syrupy coulis. The hazelnuts were wonderful, but that’s always true of hazelnuts. The ice cream was pleasant but forgettable.

Friend #2 had the warm peach and cherry cobbler with malted milk ice cream. 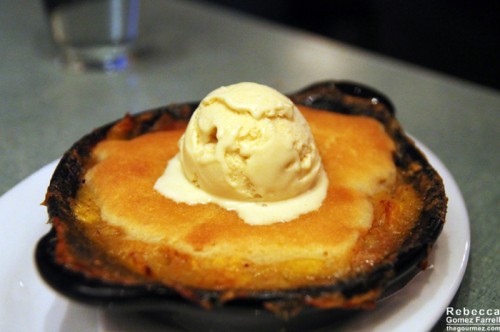 It was the more creative option, as the cobbler had an interesting texture from having batter poured on top of the crumbly ingredients rather than mixing them together. She enjoyed the dominance of peach, and I tasted a lot of almond extract in the batter, which could also be the peach, actually. A thicker fruit layer would improve it, but it hit all the right comfort food notes.

At the end of the evening, I was convinced that Poole’s designation as a required stop for Triangle foodies is earned, but I questioned whether the inconveniences would make it worthwhile for the average patron who just wants a good meal. The chalkboard menus made me feel clumsy when having to walk around to read them, and the lack of air conditioning would be a challenge for some diners. Plus, the no reservation policy has deterred many of my friends in the past, and it’s why it took me this long to finally check Poole’s out. But if none of that stymies your passionate pursuit of good food, as it did not stymie mine, then Poole’s is worth the effort.