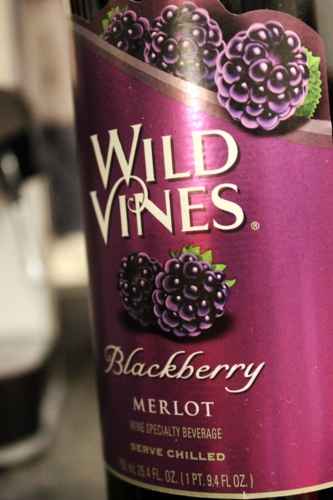 This is a cheap, cheap wine purchase. I’m pretty sure it cost me a whopping $3.50. What can I say? A fruit wine sounded fun while perusing the shelves at Kroger. It’s very purple with red highlights, like a Mr. Sketch grape-scented marker. But little grape makes it into the swallow — blackberry dominates the glass, and it’s a lovely, juicy blackberry. It smells like blackberry juice as well. At most, the Merlot gives it a smidge of depth.

Does this succeed as a wine? No. It’s more of a blackberry cordial. But it’s tasty and refreshing, so I’m not complaining. It has some effervescence, but mostly it’s sweet and juicy. Could you drink it for dessert? Sure, but it’ll also do for an afternoon tea or something similar. It might be most tempting when reduced down to a syrup.

At least it tastes like juice, which is more than can be said for most frou frou alco-pop “wines” on the market. We could see how it may be refreshing poured over ice or mixed with sparkling water, spritzer-style. Just ignore the advertised “merlot,” because it’s nowhere in the bottle, and embrace this sugary swill for what it is, an adult alternative to grape juice.

I purchased this dark bottle of wine at Walmart and came home and put it in the refrigerator for chilling. After about 1 day, I pulled it out and twisted the screwtop cap. It smelled wonderful. I decided to give it a try, and it was very good. The taste lingered in my mouth for quite a long time. I was truly surprised at how good it tasted for a sweet, chilled, red, table wine.