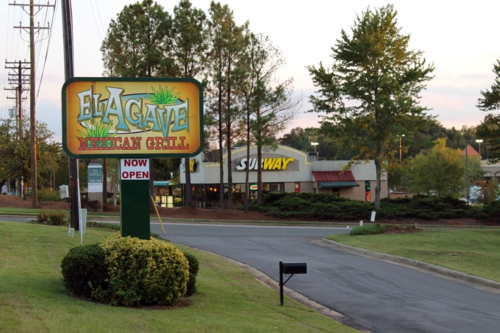 El Agave is definitely in the Mexican American vein of cooking — think combo meals with the standard rice and beans versus street tacos. They have the appropriate giant margaritas to go with that, and their wait staff was super friendly and welcoming. Roughly six months ago, it opened in the spot previously occupied by O’Brien’s (not sure about that spelling — I’ve never been to one). 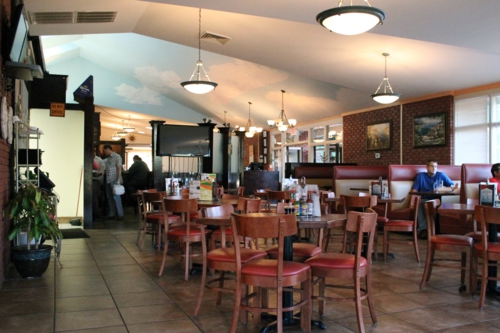 The décor is casual, just simple tables and booths though there’s a random ceiling painted with clouds over the bar area. The bar itself seemed to have a few regulars enjoying their evening. They also have a huge porch that needs to get made use of! Seating people out there rather than inside would probably help draw in business.

My husband and I both had margaritas to drink, although my husband opted for a margarita sangria, which blended red wine into the mix. He thought it was rather good. My margarita was tasty, although I’m pretty sure it’s your standard sweet and sour mix, but at least it wasn’t a full margarita mix — that’s usually cloying and plastic tasting and this was not. 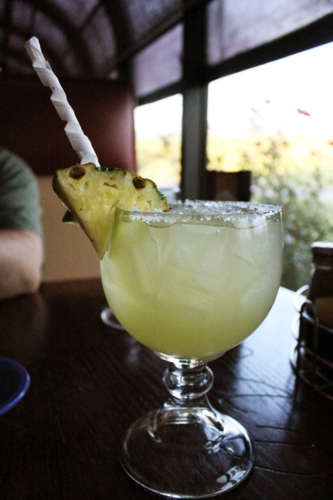 Chips, salsa, and a crema dipping sauce were served at the table. I don’t think the chips are made in-house, but they were fine and room temperature and the salsa had a medium level of spice. It’s not completely pureed but definitely closer to that than a pico de gallo. The crema sauce was tangy and had a lot of chipotle flavor to it as well as some ranch-type seasonings. I haven’t usually liked crema dips the few times I’ve had them, but this one was quite flavorful.

Menu items range from those ubiquitous combination platters that included options like gorditas and enchiladas to platters of meat or vegetables served up in different styles of marinade and sauce. I was rather impressed by my pina rellano entrée. 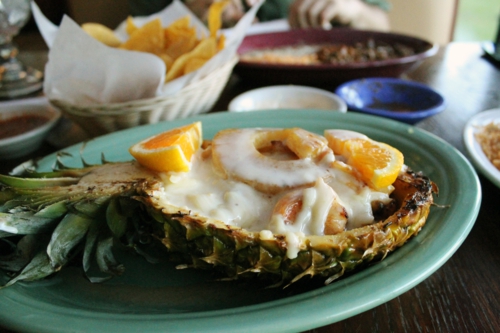 Served up in a pineapple shell, it consists of roasted pineapple slices and sautéed scallops and shrimp in a red sauce with cheese. First, the scallops were cooked very, very well. They had a delicious sear and the meat was succulent and nowhere near overcooked, which is hard for scallops. The shrimp were cooked well, too, and the pineapple was delicious. My only complaint is that the cheese sauce overwhelmed most of the flavor of the red sauce — you could see there were spices, but they were lost in the mix.

My husband had the chile Colorado entrée, which was beef tips stewed in a chile sauce. 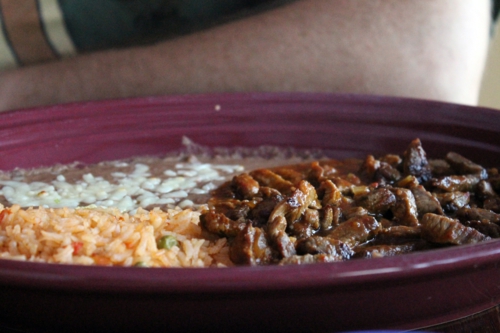 The beef was dry, but the sauce was excellent. There were a lot of different chile flavors warring for dominance in it, which created a layered, satisfying filling. Both our entrees came with rice (okay), refried beans (normal per my husband), and … a healthy spoonful of guacamole on a bed of iceberg and tomatoes! I’m always glad when I don’t have to pay extra for some guacamole. We also received three warm flour tortillas each, which I also don’t think are made in-house, but they served their purpose fine.

Thus, El Agave is an average Mexican American restaurant, and it could do quite well if they make better use of their outdoor space. The pineapple shell was fun, and those scallops were top-notch. Fresh tortillas would make it a lot more appealing, but for a cheap, easy Mexican fix, it does just fine.