Posted in : Bourbon, Dining in Raleigh - NC, Restaurants on September 7, 2012 by : The Gourmez 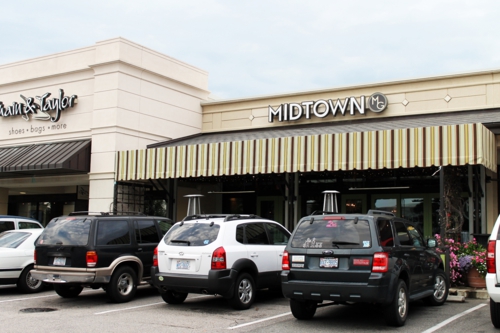 I had never heard of the Midtown Grille before the Angus Beef night at Fire in the Triangle. Chef Scott James did not win the night, but as you can read in my write-up on Durham Foodie, I was quite impressed with his creative offerings, especially his bolognese with a goat and Ashe County cheese tortellini, portabella mushrooms, and basil. So when my friends’ trusty gourmet club chose Midtown Grille for last month’s outing, I was happy to tag along.

First, parking is a pain in this portion of the North Hills Mall across Lassiter Mill Road from the main conglomeration of shops and restaurants. You may be best served just parking in the deck in that main portion and walking over—parking was a hassle on this side. But that’s not the restaurant’s fault, though it was a foreshadowing of the evening to come.

Midtown Grille has an attractive, lime green patio area and a lackluster interior, like an upscale restaurant that’s trying for a hip pub feel but stopping short of letting too much personality come out. 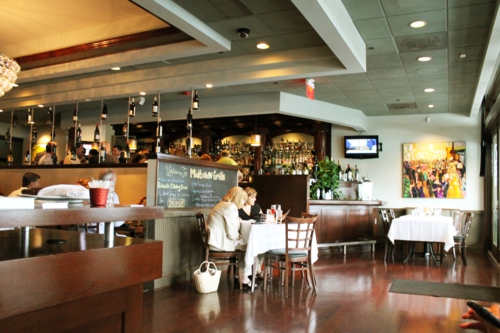 Wood-framed mirrors hang by each booth that boasts muted, pastel patterns. The spiraling waterfalls of wine bottles by the bar area are fun to look at, and the many-bulbed chandeliers would be awesome if they weren’t incredibly dusty. I feel very nitpicky with those descriptions, but hey, this is all subjective. I subjectively like more pizazz in a restaurant’s atmosphere. I also subjectively choose not to mention service most of the time in a review, but sometimes, it’s off enough that I find it necessary. This was one of those evenings. It took a good twenty minutes after we were seated for anyone to approach us. They explained the delay — a mix up in which server had us — but service didn’t improve after that. Significant time passed between taking our drink orders, drinks being delivered, taking food orders, filling waters, clearing finished plates, waiting for food — you get the picture. We asked if this was an unusually busy night — the place was packed — and our server said no, it was normally that way. So … they were slow. And it was not only our initially abandoned table that experienced those delays, should that matter to you. But back to their wares!

Like many upscale restaurants, Midtown Grille has a long cocktail list that caters toward drinkers with more of a sweet tooth than I, so I opted for a bourbon cocktail rather than one that would remind me of dessert before dinner: the Kentucky Breakfast. 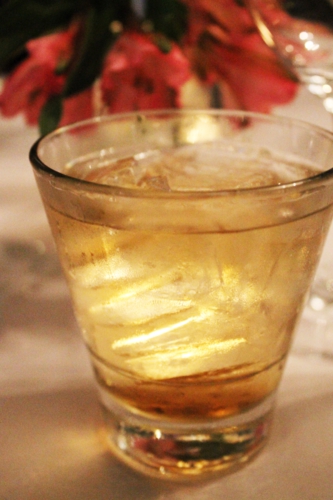 It’s made with Knob Creek bourbon, vanilla vodka, maple syrup, and soda and tasted mainly like watered-down bourbon. The vanilla vodka and maple had minimal presences, and I would have liked both to be more pronounced.

The bread, once we received it, was very good. My fellow dining companions thought I was crazy, but I swear it had a delicious sour tang that subtly snuck up on me. It was perhaps too doughy, but I didn’t mind that.

We all ordered appetizers, and the presentations for them and all the food were lovely. Two of my companions had the crab cakes. 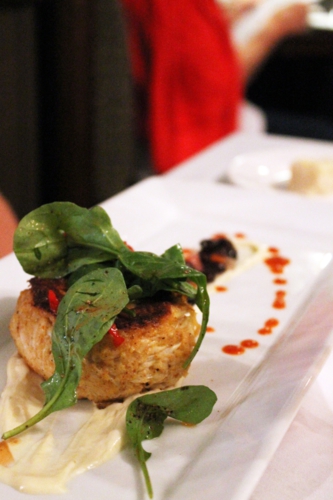 They came with pickled beans, which one friend liked and the other thought was just plain odd, but both agreed that the tabasco-like sauce served with them was overwhelming. The crab cakes by themselves were declared tasty.

I opted for a cup of the sweet corn bisque. 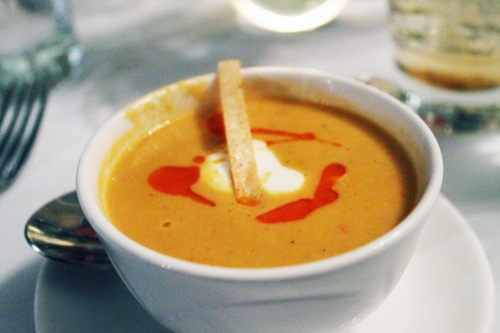 I think it would have been good, portionwise, to spend the extra buck for a bowl instead, because it was rather small for my appetite at that point. It came with a crispy tortilla strip and lime crema. The soup was smooth and smoky, and it reminded me a lot of butternut squash bisque though with a slightly sweeter and brighter flavor. The drizzle of chile oil on top was a good call, though I would have added a few extra bits of tortilla for texture.

One friend also ordered a foie gras special, which had great flavor but needed some crunch somewhere in the dish.

On to the entrees! I ordered the roasted duck breast with shitake mushrooms, pinot-soaked raisins, duck confit, and bacon spaetzle. 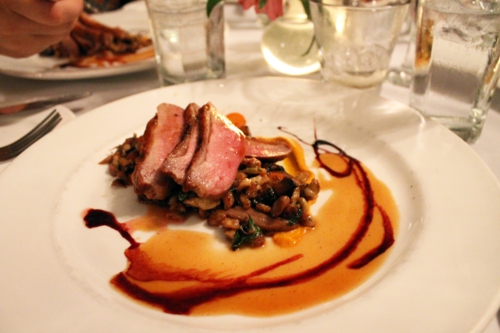 First, they get bonus points for having mushrooms served in a way that I didn’t mind them. That’s largely because all those side ingredients were cooked together to form a delicious accompaniment. Mixing duck confit bits in with them was inspired, adding flavor and texture, but I was surprised by how teeny and small the spaetzle were. The duck breast was great.

My friends, again, had less success with their choices, especially a pork chop dish that came with incredibly salty and spicy grits. 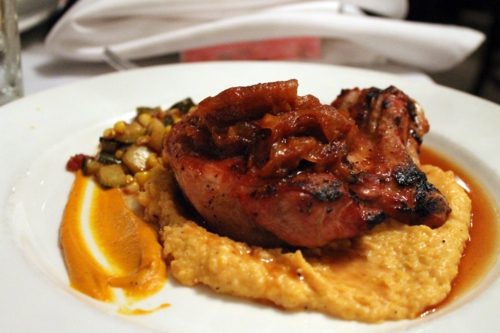 It was essentially inedible for my friend, and if you’re familiar with my reviews, I adore spice, but I can definitely see how it would overload her taste buds. I don’t adore salt, and it was drenched with that. Interestingly enough, the pork chop wasn’t seasoned enough! Luckily, we asked for a replacement side for the grits, and the restaurant was happy to bring her some fried potatoes instead.

Another friend had the lamb shoulder bolognese with tagliatelle, goat cheese crema, and herbs—a dish very similar to Chef James’s fabulous entrée in the Fire in the Triangle competition. She loved it for the most part, but by the time she was done, she also thought it overseasoned.

Only one of us opted for dessert, and that’s in large part because Midtown Grille’s dessert menu is short and not nearly as creative as their entrees: NY style cheesecake, vanilla custard, sorbets, and the rustic Italian chocolate torte. 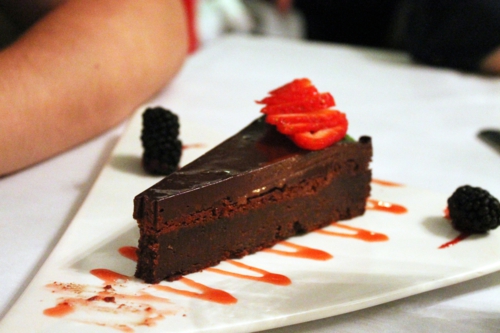 As you can see, that was some dense chocolate! My friend had no complaints about it, but unfortunately, her cocktail ended up with a bug in it right before the cake was served! Again, Midtown Grille replaced it, and we were all laughing together at how many things could possibly go wrong in one meal. Because my friend did not want more alcohol at that point, I ended up being the sacrificial last cocktail drinker. I have a rough life. 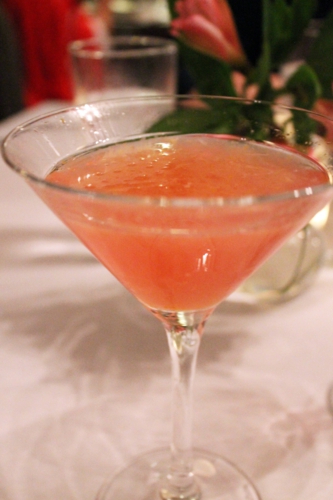 It was the Persephone’s Slip, made with Citron, pomegranate liqueur, Pom, triple sec, lemon juice, and simple syrup. Yes, that makes for a sweet drink, but not strongly so. The pulp in the glass was a nice touch, and it was an exceptionally pretty pink, as you can see. Somehow, a mild floral element came from those ingredients, and it was a mellow, enjoyable drink.

So how do I rank a restaurant that seemed to have an exceptionally off night and served a few dishes with way too much spice or salt for the average diner? I waver between an olive and a chicken because those presentations really were lovely, and my food was great, but those service and food problems cannot be ignored. Ultimately, though, it’s my experience that I can best review, and thus I award Midtown Grille a