Last Thursday, I was invited along with a banquet hall’s worth of other food media and industry folks and Carolina Inn sponsors, to a complimentary event welcoming Chef James Clark to the Carolina Inn. 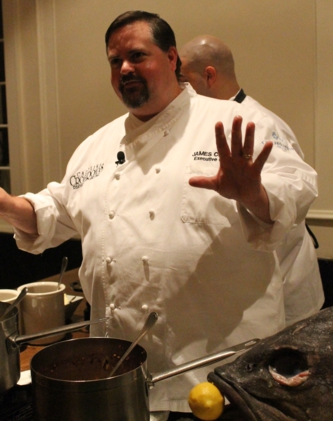 The man of the hour.

Chef Clark took up the role of executive chef for the Carolina Crossroads restaurant in June. Per the press release, he’s originally from Elizabeth City, and he comes to Chapel Hill by way of four and five star restaurants in Myrtle Beach, Washington DC, Charleston, and New Orleans. He “specializes in sustainable dining serving locally grown ‘Farm to Table’ seafood, meats, and vegetables. His individual style is inspired by local, Southern influences infused with modern techniques.  He is as meticulous about leaving carbon footprints on the environment as he is about the unique dishes he creates. He concentrates on three or four ingredients for each dish, focusing on them to maximize their flavors using proper cooking techniques.”

This event was a chance to meet Chef Clark and try out a sample of his cooking style, which was NC trigger fish with Carolina rice grits and succotash. 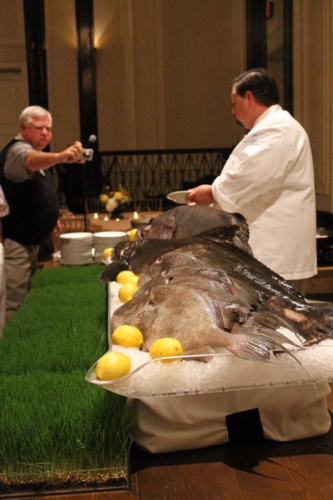 A selection of his favorite fish on display. 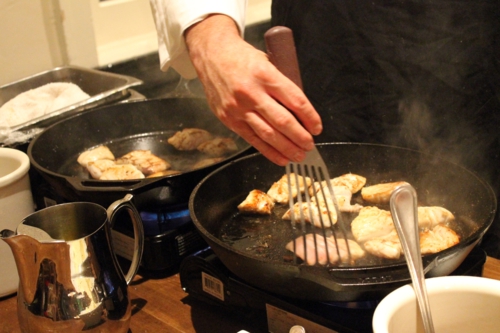 There was no doubt from this sample that Chef Clark is returning the Carolina Crossroads to a style more grounded in its Southern roots, which fits the inn’s classic ambience. The fish had a delicious outer shell from that sear, though I’m unsure about the rice grits and succotash combination. 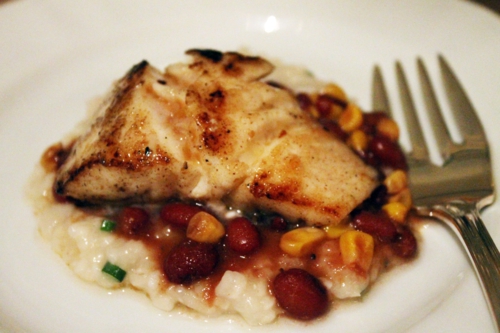 Both were saltier than I prefer, which makes it hard to judge for flavor, but the ground nut texture of the rice grits was certainly intriguing. More pleasing to my palate, however, was the honey-roasted duck appetizer with a dab of something creamy and pepper jelly.

First, it was cold, which I wouldn’t think was wise, but that worked very nicely for bringing the honey and smoky qualities of the duck out. The meat was delicious, and the sauces complimented it well.

We were also treated to an apple cider cocktail that was divine. It was made with moonshine, cinnamon schnapps, apple cider, and other lovely ingredients, which is code for I forgot to write them down. 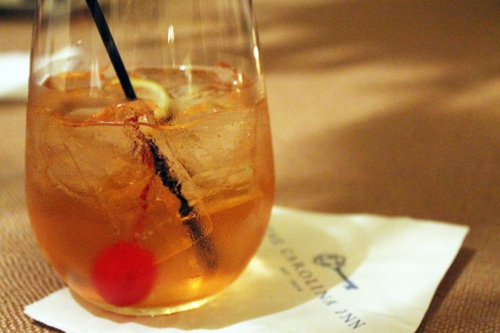 Very refreshing and light — I may not be ready for butternut bisque to crop up all over the Triangle’s menus, but I’m always happy to welcome cider cocktails back.

Chef Clark is not the only new addition to the Carolina Crossroads; pastry chef Sara Thomas also took over just a month ago. I would say I’m ashamed I ate two platefuls of dessert, but I know none of you would believe me. We (by we, I mean myself and Christina Gates of Yelp [@yelpNCTriangle], my plus one for the evening) chatted with Chef Thomas for a while, and we learned that she takes great pride in her chocolate crafting skills. 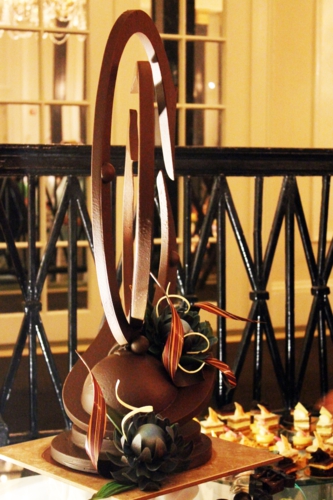 Who can blame her with a centerpiece like that? She provided a huge selection of desserts to choose from like the lemon spring cake on the left that screamed citrus — 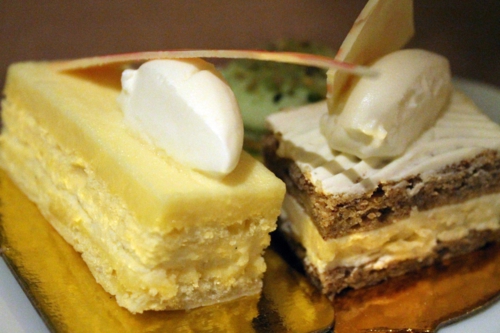 — and the banana spice cake on the right that was one of her personal favorites. Both cakes were on the dry side, but I did enjoy that banana and spice combination. 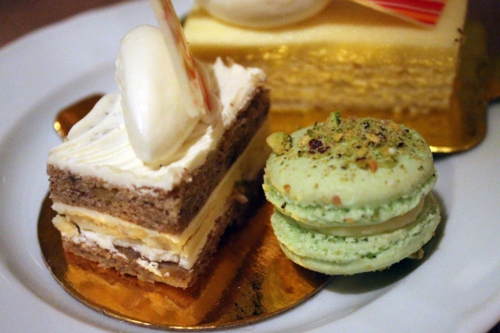 The banana spice cake and a pistachio macaroon cookie.

More up my alley, though, was the panna cotta. 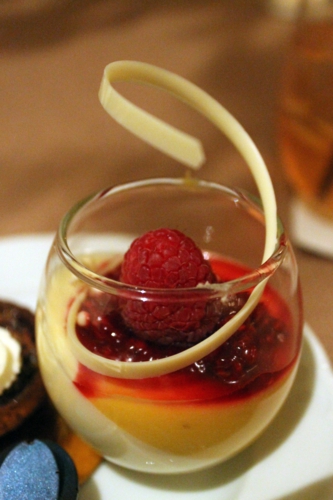 It was topped with exceptionally tart raspberries, providing a wonderful tang to combine with the creamy panna cotta, and what I think was an apricot puree that gave it depth. I was most impressed, however, with the chocolate tarts that contained honey-roasted peanuts. 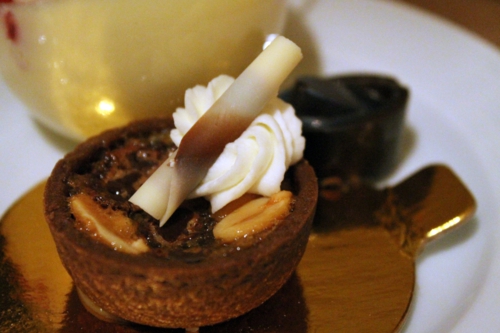 Not only is the addition of a white and milk chocolate pirouette with that dab of whipped cream a nice touch, but the tart itself was complex with a cookie crumb shell, a chocolate-chess filling, and those delicious peanuts embedded on top.

In addition to the flavors in both the chefs’ wares, the feeling of Southern roots was in the air because of the old-fashioned ragtime band playing against the far wall. 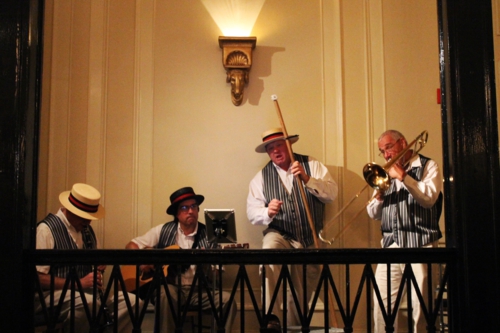 Thank you to the team at the Carolina Inn for the invitation, and welcome to Chefs Clark and Thomas! 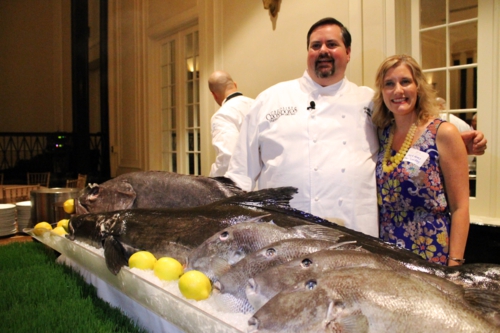 One last picture of Chef Clark, this time meeting travel writer Leigh Powell Hines (@HinesSightBlog of Hines-Sight Blog who I had the pleasure of meeting as well!

One thought on : Carolina Inn’s Welcome to Chef James Clark