Chuck’s is another of Ashley Christiansen’s new ventures in downtown Raleigh. And like her Beasley’s next door, it’s a concept restaurant, focusing solely on burgers topped with creative ingredients to give a unique hamburger experiences that you won’t get elsewhere. That’s why they get such fun names like the Bear in Heaven and Dirty South. You can order 5-ounce or 8-ounce burgers, and as someone who never needs a full half-pound of meat, I appreciate that. 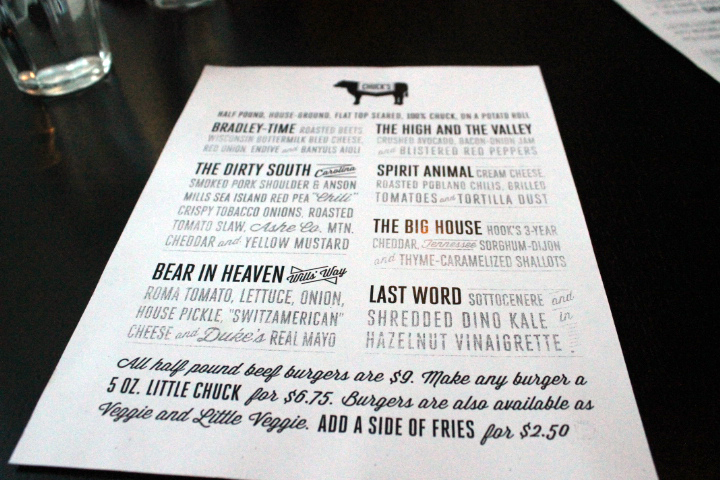 Inside, Chuck’s is all red chairs, black tables, and white brick walls, along with a row of sculpted steer heads. 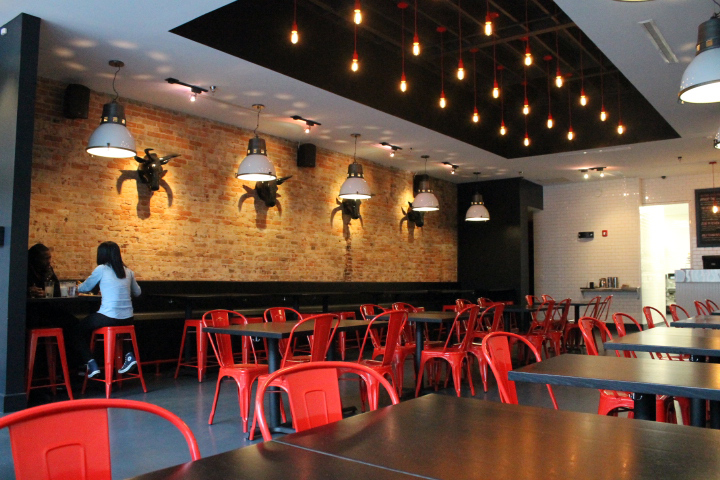 I like the sleek way it looks, especially the line of shadows on that side wall and the rows of light bulbs up above.

I’d heard from others that you order at the counter at Chuck’s, but when I was there, we had a waitress. I decided I simply had to try one of their shakes ($5), because they sounded too delicious to pass up and hello, ice cream! 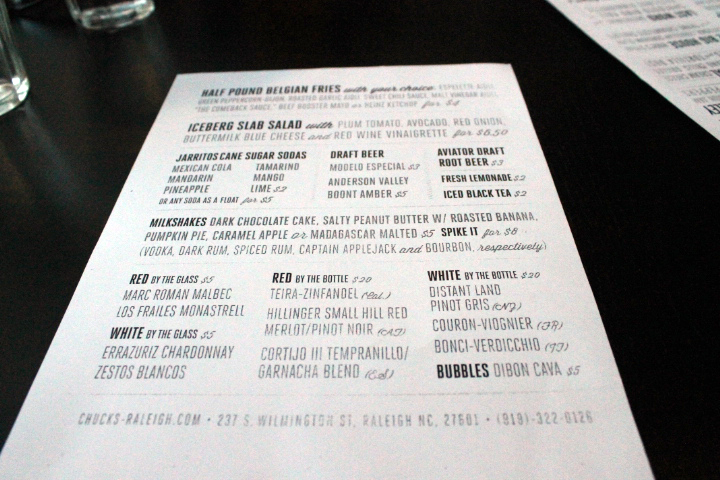 You’ll notice on that menu that you can spike the shakes for an extra $3, and that’s a pretty good deal. Beer, wine, and Jarritos sodas were also available. I went with the salted peanut butter and roasted banana shake. 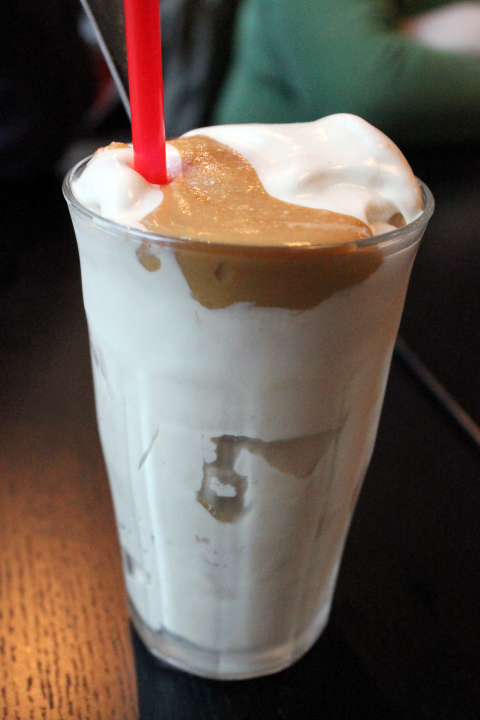 It was fantastic. I loved the artsy dollop of peanut butter on top, and it was a great ratio of banana to peanut butter in the shake. Both flavors were light and made for a lovely treat together.

To make up for shake calories, the husband and I decided to split a burger and an order of a half-pound of fries ($4). 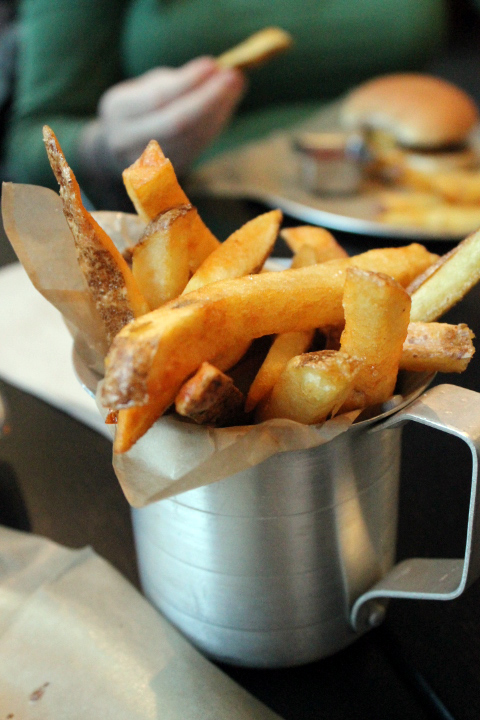 In fry terms, a half-pound isn’t honestly that much, but for two people, I thought it was the right amount. The fries were nicely cooked and came with a choice of two dipping sauces. I recommend the lively green peppercorn dijon. You can get a smaller side of fries for $2.50.

Burger-wise, the Spirit Animal was our choice. The burger was served medium on a potato roll, and ours was topped with cream cheese, roasted poblano peppers, grilled tomatoes, and tortilla dust. 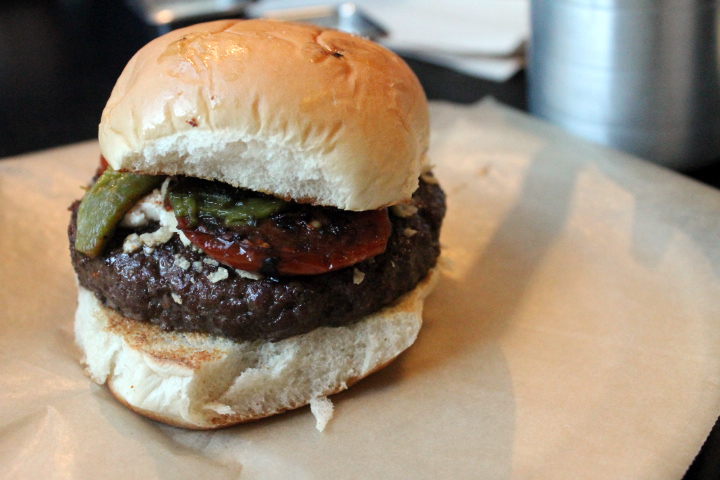 The amount of toppings were perfect, and I give the burger 4 out of 5 stars overall, but it would have crossed into 5 if the poblanos or tomato had a little crunch left to them. Combined with the creamy cheese, the overall effect was a bit too mushy. I’d throw something with a stiffer texture into the mix.

Our friends all enjoyed their burgers as well, and I was drooling just looking at the Last Word with kale and a hazelnut vinaigrette. 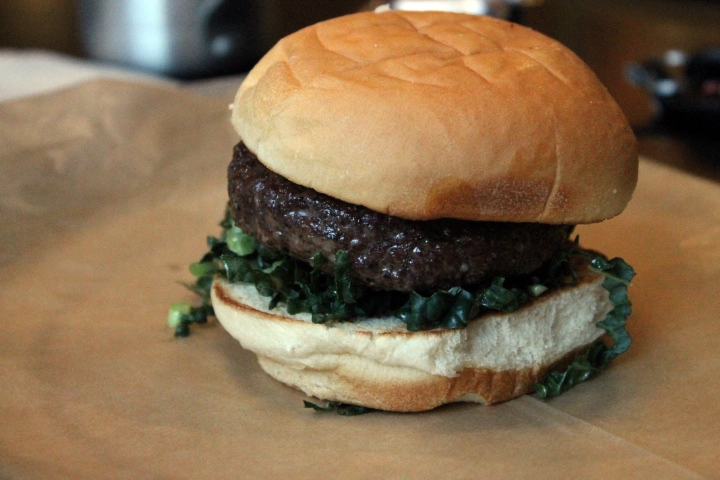 It normally comes with sortocenere, a semisoft cheese with an ash rind, but our friend can’t have dairy. The veggie burger was also tried, and though it contained a great many vegetables the trier doesn’t normally like, he thought they went well together in the patty. 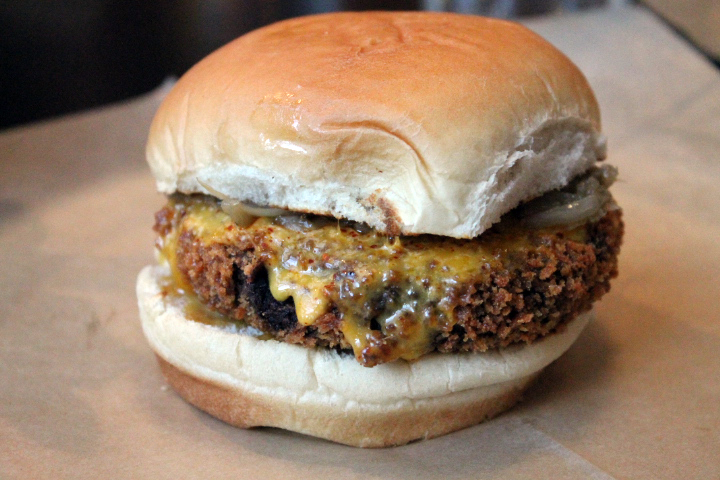 I believe it had the Big House toppings with 3-year old cheddar, sorghum Dijon, and shallots caramelized with thyme.

As someone who loves the toppings more than her meat most of the time, Chuck’s is heaven. Sure, the toppings on mine could have used a bit of tweaking, but that’s not stopping me from looking forward to trying a different one another time. And you can bet I’ll be having one of those shakes again, too. The caramel apple with added spiced rum is calling my name.

One thought on : Chuck’s