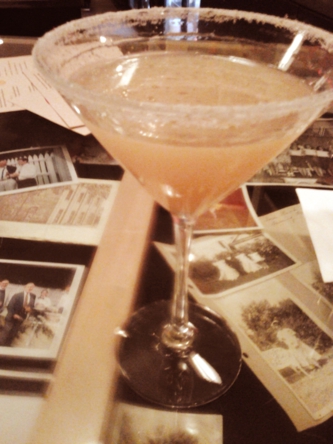 This is a seasonal offering at Watts, and it’s the second I’ve had locally featuring Foggy Ridge cider—I must check into that label to see why our bartenders are experimenting with it! Including the cider, the Graniwinkle is made of house-spiced apple cider syrup, brandy, lemon juice, and maple syrup. Surprisingly, the lemon juice is the strongest flavor, and because it goes so well with brandy, I think that’s a great choice. I expected the maple syrup to be overwhelming, but it was mellow, acting as a binding agent for the apple, spice, and lemon more than anything else. The bubbles from the cider cut nicely through what might have been strong lemon otherwise, and the concentrated apple cider syrup gave the drink that little bit of extra oomph to keep my interest.

The Graniwinkle is a well-crafted drink that’s worthy of your taste buds if Watts is still featuring it!

One thought on : Graniwinkle @ Watts Grocery