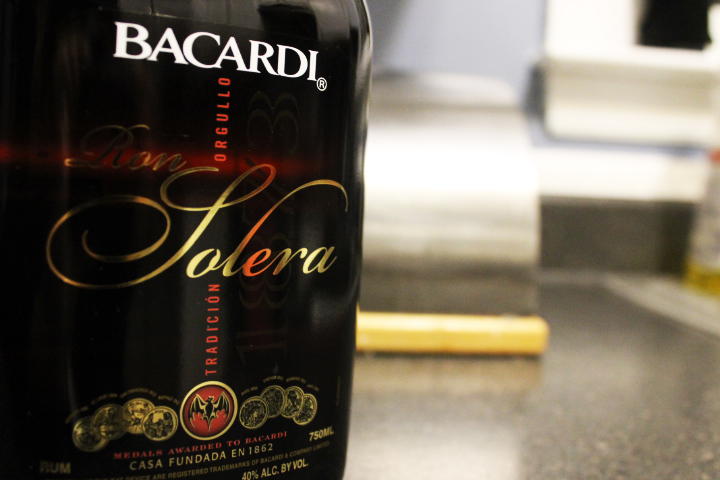 Lest the color of that bottle fool you like it fooled me, Bacardi’s 1873 Ron Solera is a golden rum, not a dark one. It’s aged up to three years in charred oak and was my choice of rum to try for sipping now that my bourbon addiction has waned.

The rum is peach-gold in color. It smells luxuriously, like a sherry with orange notes and without all the sugar. It’s light-bodied and full of wonderful citrus, which is unexpected for a rum. There’s a buttery feel to it, and mild vanilla makes it go down easily.

It would serve best for adding great character to cocktails because of its lightness, but I really enjoyed sipping it anyhow. Overall, a surprising and welcome reintroduction to rum for me.

Andy: For the first time ever for a non-flavored Bacardi product . . . this ain’t bad. I have not found a Bacardi product that I have been able to tolerate until now. The Solera has a little bite to it, but it also has something different . . . I just can’t put my tongue on it . . . nutmeg maybe? Anyway, whether you like or hate Bacardi products, give this one a shot, I definitely think it will surprise you.

Adrian: This isn’t bad. It has a little bite but a lot of richness. It definitely holds its own for the price. If you were going to buy a Bacardi product, this would be the one to buy. I would drink this as an everyday rum with no problem and have begun keeping it at the home bar for company when they come over.

. . . Strangely enough, the odor does not seem very typical for a rum, but rather more like a sherry . . . somewhat overwhelmingly sweet, with a syrupy honey quality. In the glass, the rum is a medium dark amber color, very similar to many of the heavier scotches. The flavor is just as sherry like as the nose, with a sort of sickly sweet burning quality. It also tingles, almost as if it were carbonated. Despite that, it is surprisingly smooth, more towards the smooth side of the scale than the harsh. There is a caramelized sugar note that lingers in the mouth.

The Bacardi Ron Solera is, honestly, one of the best rums I have tasted in ages. Its bright flavor is sweet and the follow isn’t too difficult, though a bit sharp, its overall feel was smooth. Mixing it into soda takes away much of its complexity and makes it taste like Bacardi Anejo or simply Bacardi Dark. But, it’s a good rum. Highly recommended.