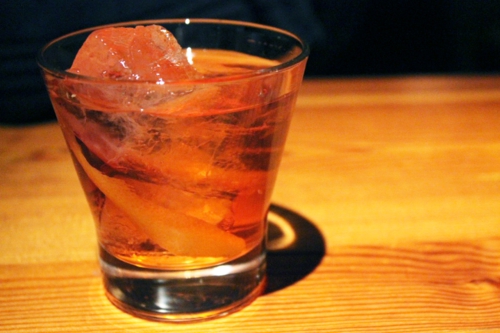 Foundation has another wonderful cocktail to add to its list with the Golden Era. Bourbon has been my spirit of choice for the past year or so, but recently, it’s been a bit too harsh for my palate. So I’ve gone back to my first love, rum. The Golden Era uses Cruzan single barrel rum, Foggy Ridge Pippin Gold cider, Peychaud’s bitters, and lemon peel to create a strong drink that’s smooth going down. Isn’t that what all good cocktails should strive for?

The star player in this drink is definitely the cider used to complement the rum. It’s a dessert cider, which wasn’t something I’d heard of before, though I know apples are common to the dessert wine world. In this drink, it mellowed out any harshness from the rum, and the subtle lemon oil from the peel gave it all a little infusion of brightness.

If you love rum, I think you’ll find this is a golden era at Foundation for your tastes.