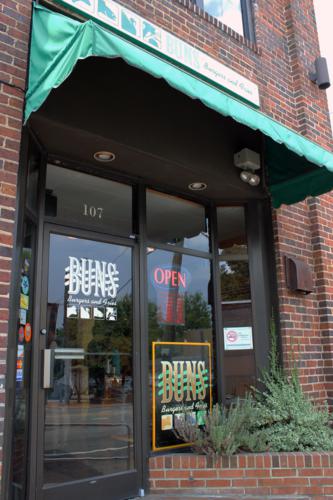 Before trying out this downtown Chapel Hill burger joint, I didn’t realize it was so similar to Bull City Burger and Brew, which I recently reviewed. Both locations grind their meat daily and take a green-forward approach to managing their restaurants, though BCBB is more committed to using only local ingredients. Both focus close to exclusively on burgers and hot dogs, though Buns has a wider variety of base meats for their burgers: 100% angus beef, turkey, salmon, and tuna are all available in sandwich forms. Both offer a variety of toppings and sauces for their basic burger price, but Buns beats BCBB by a dollar at the base price AND includes a slice of cheese. To be fair, though, BCBB is a step up in atmosphere. 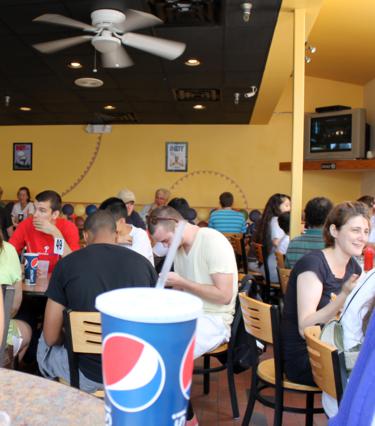 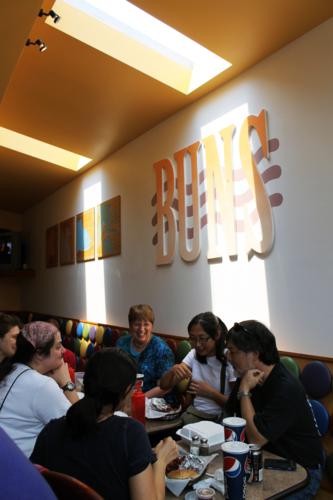 Buns is more of a nice fast-food feel with yellow walls and a rainbow of polka dots on the booths in the dining area. Yet, if you’re choosing solely on affordability, Buns gets the win. If you want a relaxed place for beers after work, I’d vote BCBB.

I have absolutely no idea how anyone could eat more than a single at Buns though they offer double and triple burgers as well—I’ve heard reports that doubles have been consumed, but I’m not sure I’ll believe it until I see it. The patty was humongous. 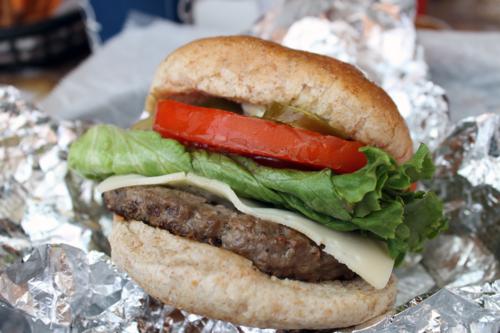 It was seasoned well with plenty of pepper. The bun from the Bread Shop, which is where I get my weekly loaf, stood up well to the toppings. I believe the jalapenos offered were slightly roasted to mellow their bite. I would have liked the swiss to be more melted than it was, and my pesto mayo needed to be spread better over the bun, but otherwise, it was delicious. Definitely keep it in the wrapper; it’ll get messy!

One of my friends ordered an oft-appearing special burger that came with goat cheese, red bell peppers, and balsamic dressing. 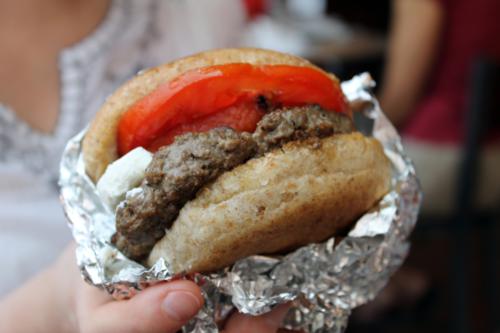 It looked beautiful, and she loves it enough to order it every time she’s there and it’s offered.

Another friend wasn’t in a meat mood and went for the $3 regular-sized Caesar salad. 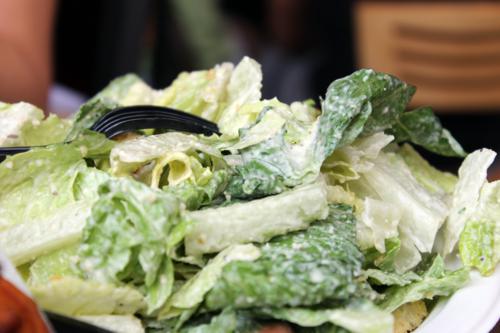 She ranked it slightly above average for Caesar salads but a great deal for that prize. The $5 salad is sure to be humongous. Our last friend ordered the grilled salmon steak sandwich with wasabi mayo, Asian slaw, citrus seasoning, lettuce, and tomato. She gobbled it faster than the rest of us could make a dent in ours and declared it great.

A large pile of fries, either sweet potato or white potato, is enough to feed an army. 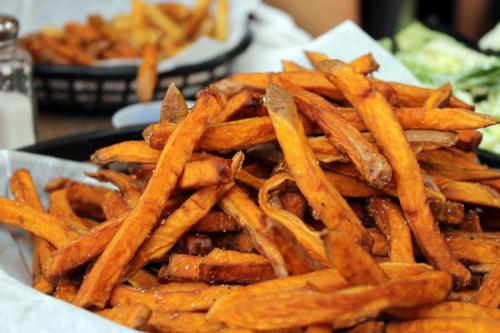 I love that the skins are kept on—I honestly don’t know why anyone bothers to peel potatoes at all. They could have used more seasoning, but since they are mainly meant to be vehicles for Buns’ wide array of sauces, that’s not really a complaint. A regular order comes with one sauce and a large with two, though I think they were giving out two to everyone regardless. Our table had the curry mayo, chipotle mayo, and Thai sesame sauces. The curry mayo had the best flavor of the bunch. The chipotle tasted pretty good, and with some specks of pickle, it reminded me of a thousand island dressing with chili powder. We were rather surprised by how sweet the Thai sesame sauce was. It was basically a very thick teriyaki sauce and was my least favorite of the choices.

Buns is an excellent place to get a burger, especially with affordable prices for quality ingredients. Enjoy!