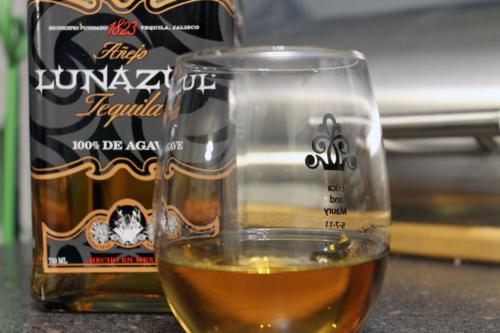 Per the bottle label, this tequila is supposed to awaken my inner wolf or some such nonsense. After a year of exuberance for George R. R. Martin fans like myself, I guess I won’t complain if savoring an aged tequila brings out my inner Stark—I really hope I have an inner Stark. The year on the bottle, 1823, is when the agave farm first began production. If I do find my wolf, then I think it’s safe to assume that the farm broke ground in the dark of winter.

It smells very nice, like an anejo tequila should, with amber notes that allude to flavors that may make me squeal (I may already be tipsy). I smell aloe vera as well. Surprisingly, there’s no squealing when I do drink it; it’s lighter than the nose conveys and has a super mellow bite for a tequila.  The liquid is thin, but I dig those vanilla notes a lot. It tastes like peanut brittle sans the peanut. It’s a rich, golden, sugary treat that should never be masked in a margarita.

Lunazul is really good and quite unique among pricier tequilas, but it’s missing a level of sophistication that would convince me I can’t live without it. Also, my howl’s still pathetic.

. . . this tequila just doesn’t measure up to its pricier competition. It’s all about the body. While I expect anejo to be a smooth, vanilla-infused, whiskey-like experience, Lunazul is muddy. The nose evokes a younger tequila, with green agave notes overwhelming the spirit. The body is similar, with a hard, vegetal edge and a pungent agave body. You’ll find tantalizingly sweet vanilla notes only hinted at, which is frustrating. The finish is overly herbal and hard. It doesn’t have that rotgut burn, mind you, but it has a rocky edge that makes it unthrilling.

Roasted peppers and almonds, vanilla oak, fruitier (dried fruit) smell than most tequilas. Somewhat delicate, neutral start then followed rapidly by a dry oak and pepper tang and touches of leather and tobacco. Finish is dry, slightly oaky with a nice touch of citrus and minerals . . . A light and dryish Anejo with more delicate presence in a drink than most so be careful how you use it . . . Really, a helluva buy for the money.