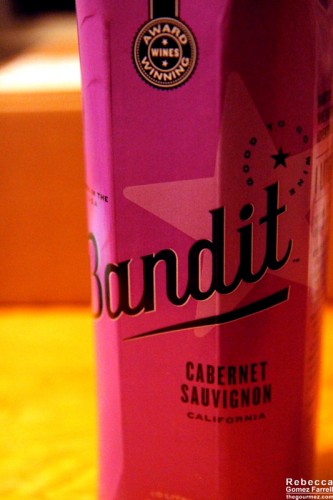 Bandit Wines is a boxed wine company that you can find on Safeway’s lowest shelf. I haven’t had much boxed wine in my life. But when I tap into the foodie party line, I hear from craft enthusiasts that beer in a can has no metallic aftertaste and that boxed wine can be just as good as wine in a bottle. It appears as though mere reputation alone has kept me from embracing either thus far.

I’m not ready for beer in a can. I’m barely ready for beer in a pint glass—half pints do me well. But wine in a box? I could try that…and I swear my willingness has nothing to do with how ridiculously cheap this box was (about $5). Nope, what sold me is what that the pretty little lavender box said clear as day (good job, marketing!): At a liter, one box is the equivalent of one and a third bottles of wine, making it even more ridiculously cheap than it already was. Sold!

(Yes, I realize that means I bought it for exactly the same reason as I claimed I didn’t buy it. You don’t need to tell me that. And now I’ve lost my literary effect. I blame you.)

How does it taste? As I drink, I feel a kinship emerge with one Violet Beauregarde and her amazement as the gum she chewed at Willy Wonka’s factory shifted and reshaped itself into something new. A lovely, simple, cherry-leather nose broadens to include eucalyptus and pine notes on the palate. Those fade away, and the cherry reasserts itself to engage in delicious dessert play with milky cocoa. Luckily, no adverse side effects have been detected…yet.

I’ll be clear; this wine exceeds all my expectations. It gets an 80/100, and I will be back for more of that value buy. Heck, I’ll even give their chardonnay a chew. 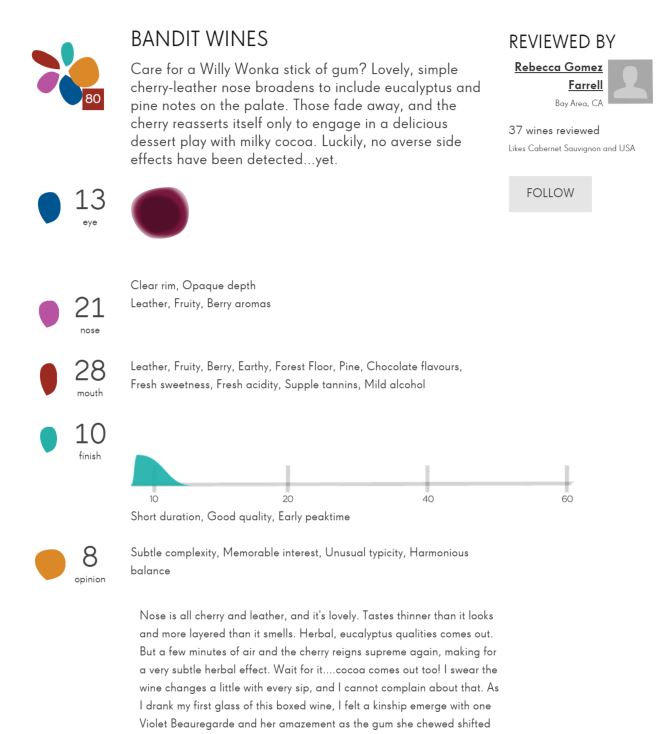 Bandit wines tickled the palate and delivered complex aromas, flavors and finishes. The cab had ample mouthfeel and complex flavors, mixing fruitiness with an oaky complexity.

While slightly lighter in body than most Cabs, the balance of spice, pepper, and dark cherries is perfectly on point.

Unremarkable cabernet with sweet oak, blackberry, and pine needles. Very soft tannins and a pretty vegetal finish, but good with burgers over a campfire I bet.