The America’s Best Espresso Competition at the Atlanta Coffee Fest

One of the fastest-moving events at a Coffee Fest is the Best Espresso Competition. I’m not just saying that because an integral part of the espresso-making process is using intense water pressure to extract a shot of espresso in around 30 seconds, give or take 10 of them. I’m saying it because the baristas competing in this event do a lot more than simply press a lever and a button. Rather, they work their way through all the major steps of pulling a shot with precision and intent. Those steps?

I should note here that the judges and competitors tend to be Third Wave coffee aficionados, meaning that the traditional Italian roasts most associated with espresso by consumers, especially in Europe, are not what you’re likely to find at a Best Espresso Competition—or at least not at the bouts I saw. Instead, Third Wave fans prefer single-sourced, often washed, lightly roasted beans and blends as such processing leaves more of the beans’ unique flavor profiles intact. I spoke with Head Judge Cortney Kern of Barista Maniac, however, and he assured me that “sometimes a darker roast will come into the element—you’ll notice what it is visually and by smell. But most [competitors] do use a specialty light roast.” 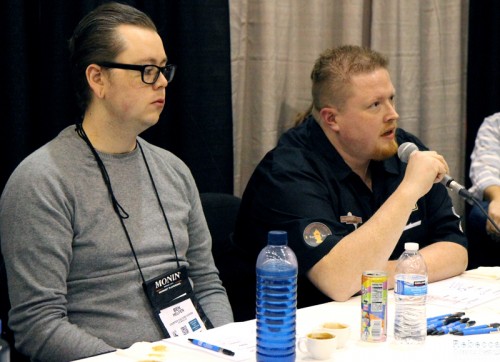 Let’s continue with the other steps in a Best Espresso Competition! 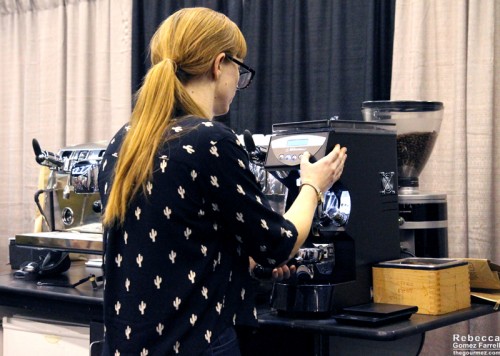 Noelle Archibald of Lamplighter in Bout #1. 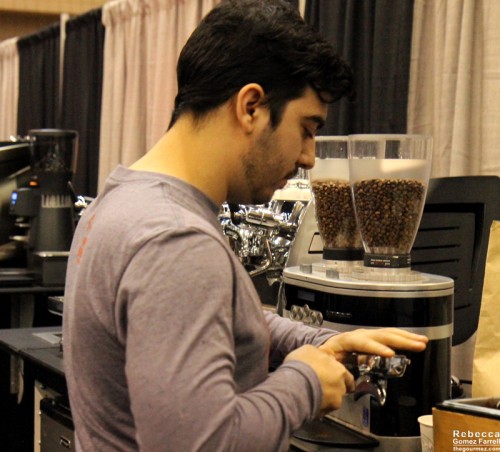 Dean of Buddy Brew going for the hand-tamping approach in Bout #4. 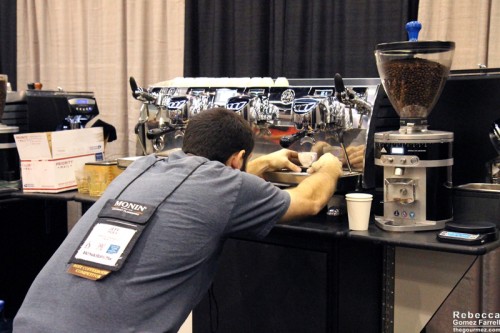 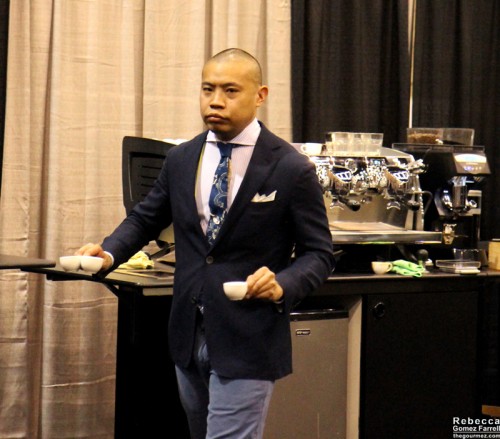 That’s John Letoto, competing for Copper Horse Coffee Roasters and eschewing convention by bringing all three of his shots over at once. Usually competitors pull shots one at a time and bring them to one of the three judges individually, which often looks like this: 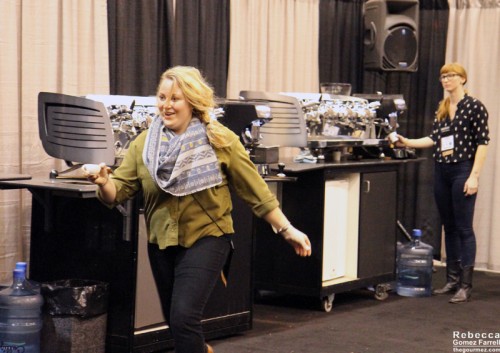 Rev Coffee Roasters rushing to the table in Bout #1.

But Letoto moved on to the finals, so somehow, I think he knew what he was doing.

Now, that list of steps represents a lot of areas in which mistakes can be made, and the baristas need to finish serving their best three shots in just ten minutes of competition time. Three espresso shots in ten minutes might not seem that hard, but the level of expertise involved in each stage of pulling a competition-worthy shot makes it quite a feat—and these are perfectionists. 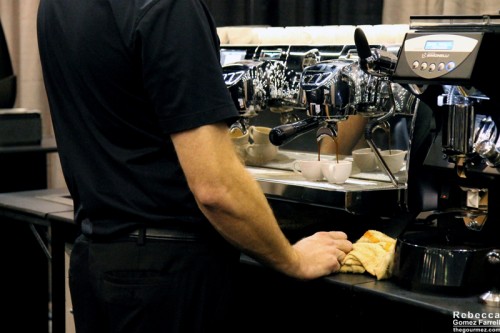 I witnessed two competitors unable—or perhaps unwilling—to serve their shots in time, and I only saw maybe a third of the bouts.

By far, Dean of Buddy Brew Coffee was the most fun competitor to watch in Atlanta. 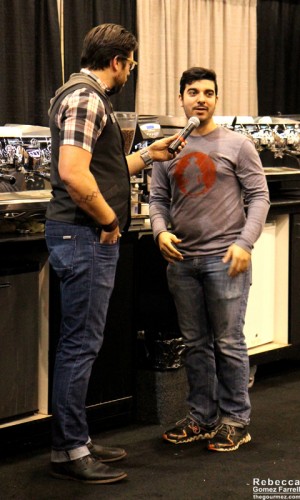 Dean at the mic with the competition host.

He danced his way through every round. I honestly had to stop myself from laughing at his pure enjoyment of the task at hand. The semi-final round between Buddy Brew and Bold Bean was top-notch, and you can see the genuine respect these baristas have for each other. 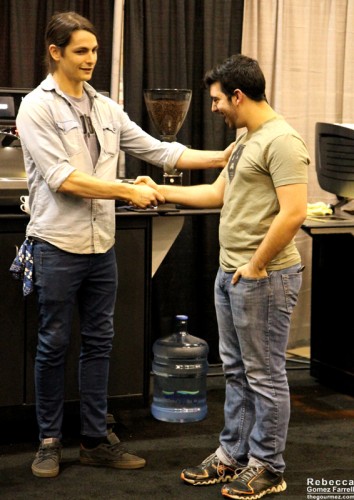 Bold Bean moved on to the finals and Buddy Brew went on to best Bonlife Coffee in the bronze-medal match. 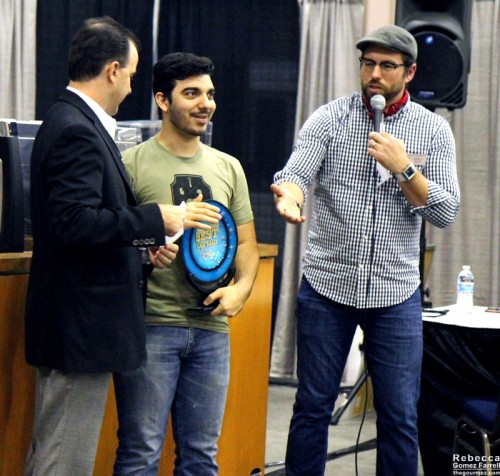 How do the judges do their job? Well, they evaluate the espresso they receive for balance and complexity of flavors, body and mouthfeel, and the lasting impression the espresso leaves. 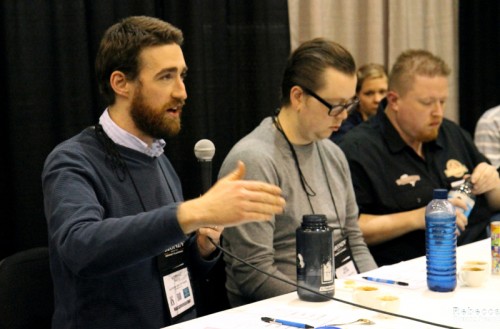 The judges explain their choices. 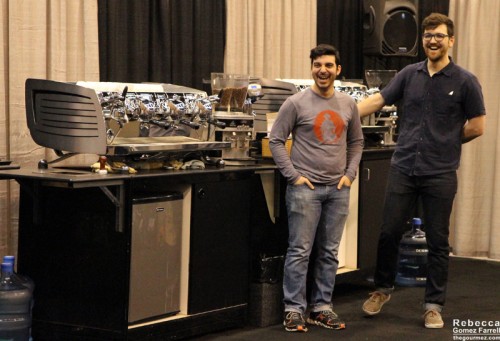 The competitors, Buddy Brew and PERC Coffee in Bout #4, are entertained by those explanations.

It’s ultimately a subjective ranking, which is why there are three judges on hand to avoid any inevitable ties. Because competitors used the same blend throughout the two days of competition, I wondered how much having had the espresso before affected the judge’s opinions—did they try to discount what they’d sampled before?

“Not at all,” Cortney explained, “Most of the time I try to remember the espresso pulled before. I appreciate what the roasters do.”  I observed that the judges were often most impressed when later shots came out with a different flavor profile—as long as it still achieved an amazing balance, of course. And because Third Wave coffee connoisseurs appreciate higher acidity coffee beans, the judges gave out many descriptors like “lemonade” and “peach cream,” usually accompanied with pleased smiles.

So how did it all break down in Atlanta? The final came down to Bold Beans versus Copper Horse Coffee Roasting. For once, we did not get to hear the final rankings at the end of match, instead being forced to wait until the awards presentation to learn who was victorious. The result: 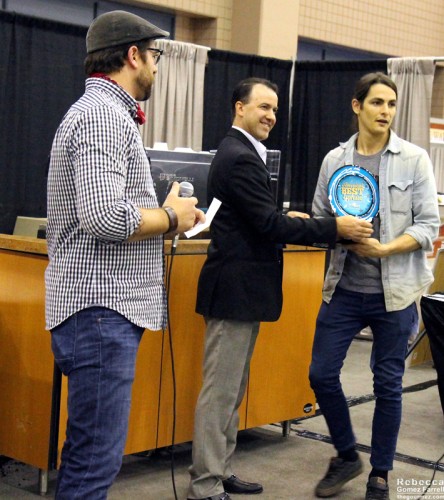 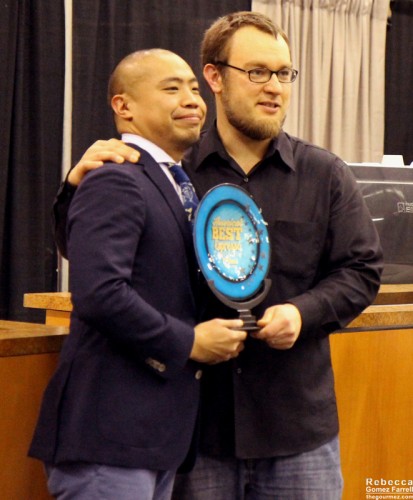 Congrats to them both for such strong finishes and to Bonlife and Buddy Brew for making it to the Top 4. They will all have the chance to compete in the 2016 Grand Championship. For prizes at this regional Coffee Fest, 1st Place received $2000, 2nd $1000, and 3rd $500.

I want to end with a few words from Cortney about why he loves what he does as Head Judge at these competitions, because those words encapsulate the spirit of support I could see among the coffee pros at all the Coffee Fest competitions. What Cortney finds rewarding is “getting a chance to taste each one of these shop’s espressos and be recognized as Barista Maniac. It’s such an honor to be acknowledged and to communicate afterwards about the coffee and…leave a positive influence on others pursuing a coffee career or help coffee roasters reach higher goals.”

For more pictures of the America’s Best Espresso Competition, click here. My final Coffee Fest Atlanta post will be a quick recap of the Latte Art competition. That reminds me; I really need to find out who hosts the throwdowns in Oakland…