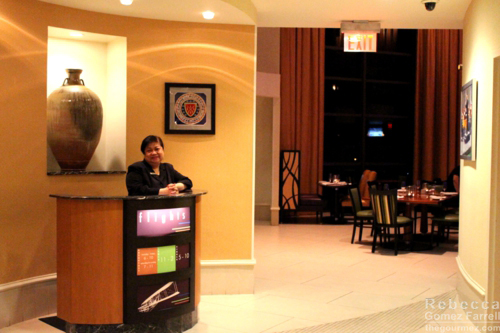 Sweet hostess. Only dessert was sweeter.

Normally, I jump right into a review, leaving any musings on my experience for the end. This one requires more set up because Flights is in a transition period and it shows. So you should understand before I go on what we learned from the manager: Flights’ executive chef had been promoted about a month before we dined there to a regional position with Marriot Hotels. Which means the current executive chef is new to the position, so the cuisine is not as refined as it may grow to be with time. And I sincerely believe the front-house staff must also be in transition, because I have no other explanation for why we’d have a server in a fine dining restaurant mess up the sheer number of times that ours did. It was pretty ridiculous: providing a substitute glass of wine with no explanation that the requested glass was unavailable, asking for a new dinner entrée selection for an 86ed course after appetizers had already been served, sharing that the seasonal fruit selection for a dessert didn’t ever change … I could go on but that’s enough to paint a picture. When the timid, nervous man explained at the end of the meal, after confirming who ordered what for at least the third time, that it was his first night on his own, we merely nodded, having figured that out within minutes of ordering. I’m still rather surprised management allowed someone that unprepared to be a server. The poor man was really, really not ready for the dinner shift. Hopefully, by now, that’s changed, but it definitely made a difference in our impressions of dinner at Flights, which had been portrayed to me as a hidden gem of fine dining in the Triangle.

Flights could be considered a hidden gem because it’s a hotel restaurant. The entrance is in the back of the North Hills Renaissance hotel lobby. And Flights is a hotel restaurant in every sense of the word. A mixture of unobtrusive, pastel, geometric patterns on the fabrics combined with uncomfortable booths with high backs and difficult to navigate table legs, and the ubiquitous Muzak set an atmosphere that did little to remove us from the feeling of being in a hotel. 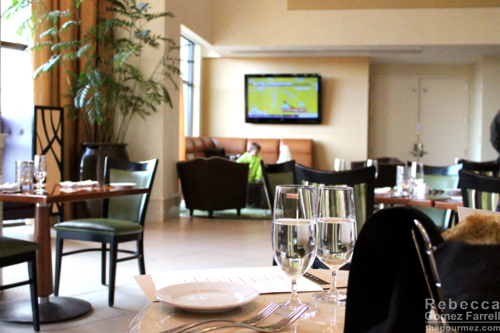 Let me also take a moment to point out I don’t get the appeal of passing around wine lists on iPads. At all. I’ve seen it in a number of restaurants, and usually, those screens look greasy and scream of germs, which was the case at Flights as well. I know paper menus are likely just as germ covered, but at least they don’t look dirty! I promise I’ll still think you’re hip without them, restaurants. Speaking of the menu, Flights offers a small selection of appetizers, salads, and entrees on their normal dinner menu, featuring a mix of Southern and Italian options, and a larger, changing small plates menu. 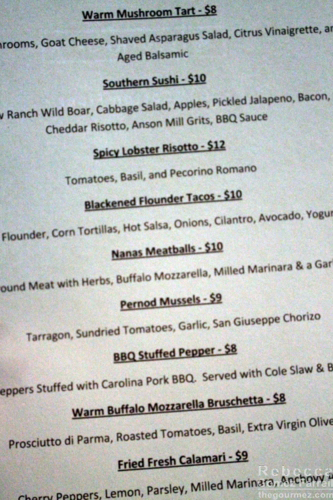 The small plates are affordable and plenty of food, in my experience, so I’d recommend ordering from it. But before we ordered at all, we were given amuse bouches of crab and shrimp on parmesan crostini with raspberry coulis and pesto. 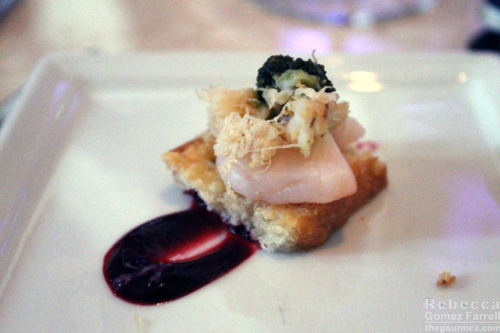 They were well executed with some lively fruit to whet our appetites and the seafood kept simple. The French bread served before the meal was warm, packed with herbs, and had a great crunchy crust. So after our poor waiter’s initial awkwardness, I was hopeful the food would salvage the experience. Onward appetizers!

Friend #1 had a cup of NC sweet potato bisque with boiled peanuts and salted caramel. 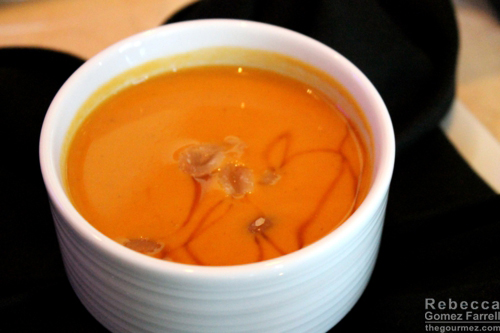 She thought it was very nice and stopped short of being too creamy. More peanuts were all she’d request. Friends #2 and #3 had the café tequila pork belly with beer-battered onions, fried green tomato, and chipotle ranch. 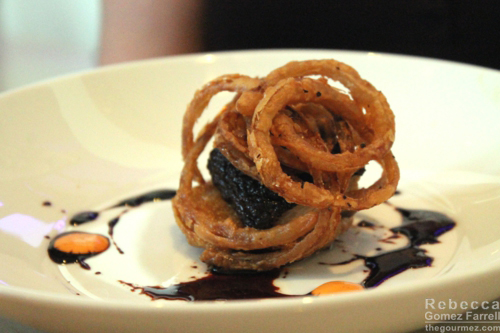 The onion presentation was impressive, but my companions thought it made the dish difficult to eat all in one bite, and the pork belly did not go well with the greasy tomatoes. The sauce was indistinctive as well, with the chipotle flavor fading fast.

I went with a small plate offering to begin, the very creative Southern sushi. 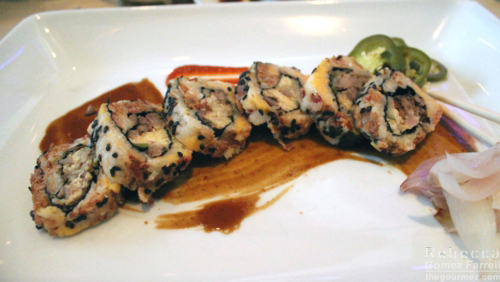 Those pretty rolls are made up of cheddar risotto and Anson Mill grits, wild boar, a cabbage salad, apples, and bacon with barbecue sauce, sriracha, and pickled jalapeno on the side. Despite being dry, the novelty of the dish won me over. It tasted primarily of pimento cheese and bacon, and when all the elements were tasted together, it was intriguing and flavorful. Again, I was struck with the chef’s potential, and hoped the entrees would continue that good luck. Aspects of them assuredly did. Friend #1 thought her maple-brined pork chop with spice jus, cornbread pudding, sweet potatoes, parsnips, and apples was good though definitely on the sweet and syrupy side. 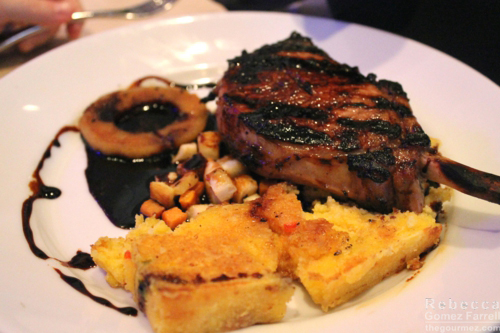 She would have liked the pork to be tenderer as well.

Friend #2 had the seared scallops with bacon, butter-roasted cauliflower, apple, and a cider emulsion. 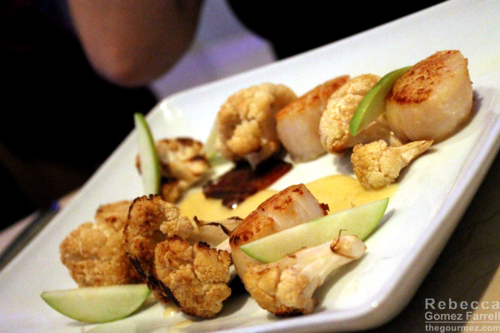 It was a lovely presentation—Flights has no challenges there. The scallops were expertly done with delicious cauliflower, but the dish puzzled her overall. Not only did it get cold fast, but the different ingredients weren’t integrated at all. They all just existed on the same plate with little thought put into combining them into a dish. Friend #3 and my opinions of our Sunburst Farms’ trout with pistachio, beet risotto, field peas, and brown butter was much the same.

Parts of it were excellent, especially the buttery, crisp trout skin, but otherwise, I have no idea what the pistachios were doing on the plate or what the pretty pink but flavorless, tapioca-like, beet risotto contributed at all. There was also caviar, I assume trout, on the plate that we didn’t expect at all.  Friend #3 was particularly disappointed in the paltry offering of trout meat, which didn’t bother me because I fixated on the skin’s deliciousness. We were both surprised the field peas were actually black-eyed peas, which neither of us are fans of. Much like the scallop dish, this had some great individual elements, but none of them combined in a manner we could make out.

Dessert, however, was at a higher standard. Well, I would rank all three desserts we ordered high, but my friends didn’t quite agree. 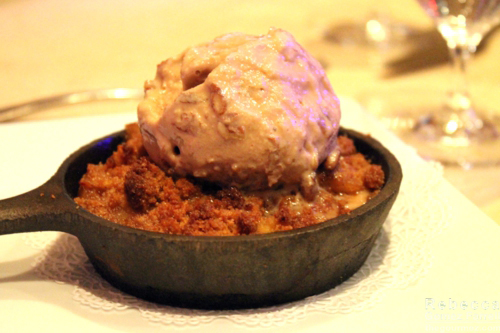 Friend #3 had the apple spice cobbler with butter pecan gelato, which I enjoyed thoroughly, but she thought was too strong on the spice side. Being as I can eat cinnamon plain, I’d trust her opinion over mine. It was also overloaded with nuts, possibly more of those than apples. 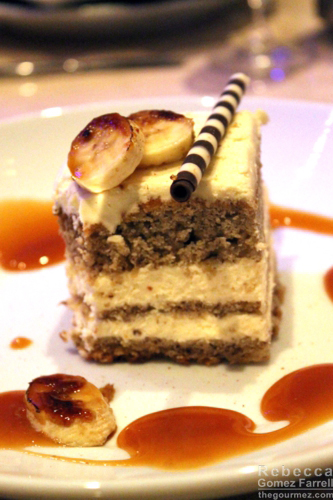 Friend #1 had a banana cake with Myers dark rum and white chocolate that was dense with great Myers and banana flavors for me but not enough POW! for my friend.

We all agreed, however, that the hot cheesecake Friend #2 and I ordered was to die for… (I now have a picture of it! Friend #1 went back and took this shot:) 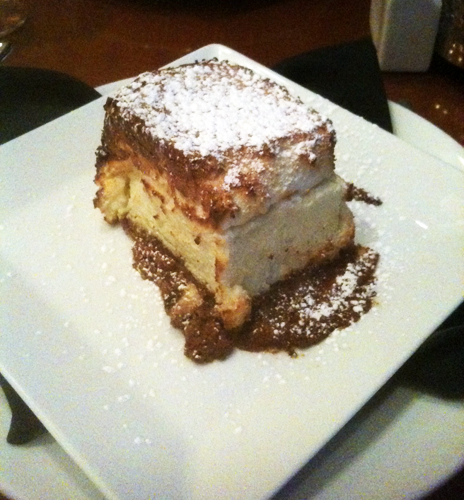 All credit due to Friend #1, Laura Poole.

I must have been distracted by the giant square of cheesecake that was topped with meringue and then broiled together. It’s an impressive sight, and the warm, extra-lemony cheesecake was delicious in combination with the caramelized, crusty, bubbly meringue. I thought the sugar and spices in the graham cracker crust were also a nice touch.

The hot cheesecake was definitely the note Flights needed to go out on after the underwhelming service we received and the food that showed great possibility but not yet the follow-through to match it. For now, I can only recommend stopping at the bar for a small plate and dessert before a movie rather than taking on a full Flights dinner. Hopefully, that will change as both the front and back of this restaurant’s staff gain more experience through this transition period.