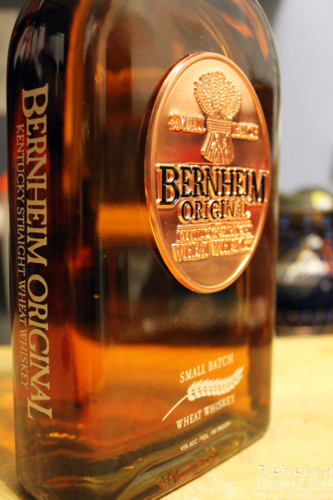 This winter wheat, small-batch whiskey is made in the same style as bourbon but the wheat is 51% of its makeup rather than corn. Its color is lovely, reminding me of opaque almond brittle, not the creamy stuff. It is significantly sweeter to smell than most bourbons. That sweetness sucks me right in and doesn’t let go even after the alcohol fire roars to life. The nose also has mellow cinnamon. Star anise comes to mind but so gently that licorice haters should not worry.

The sweetness coats my throat while sipping. It’s floral first, sweet blossoms like honeysuckle. Then the flavor segues into rich pecan and ends with classic bourbon notes and butter that lingers on the tongue. The body has an airy quality like taking a bite of Laffy Taffy complete with the filminess of that candy. But I like bourbon a lot more than I like taffy, and it’s no distraction here.

I don’t want to mislead you with candy comparisons; this is a strong whiskey. But it achieves a balance that makes drinking it entirely more pleasurable than the hard stuff often is.

When nosing Bernheim, you might be surprised that it smells a tiny bit spicy, but this initial peppery feel quickly takes a back seat to a thick maple syrup sweetness. Tasting Bernheim, you will first be surprised how superb it is, then immediately take another drink to double-check what your palate just experienced. You are going to get some bourbon qualities, because there is corn in the mash bill. It does have some subtle vanilla notes and has a bit off an alcohol kick on the front end, but what you get primarily is a delicate and nonsticky honey sweetness, baked apple pie (or other dessert notes) and freshly baked bread. You might detect some baking spices (all spice, nutmeg) in between the honey and bread layers. It has light and delicate taste with a finish that is not too short and mainly filled with the fading traces of the honey sweetness and bread/wheat combo.

The nose on Bernheim Original is soft and sugary.  It’s much more refined than a bourbon as wheat is often brought in to tame the corn and malted barley in bourbon recipes.

The taste is silky smooth, with a slight bite on the back-end.  The wheat really shines with this whiskey, and you can immediately tell that Bernheim is matured to perfection.  The texture is surprisingly light, for a 90 proof expression.

Afterwards, the finish is brief but satisfying, with the underlying tone of wheat.

The whiskey has a warm, light aroma with hints of citrus and spice and just a touch of oak. The flavor is clean, crisp and dry with honeyed citrus and undertones of toasted nuts. I think a cube or two of ice brings out the best qualities in Bernheim’s Original Wheat Whiskey, especially since dry liquors are rarely at their best when taken neat. B+