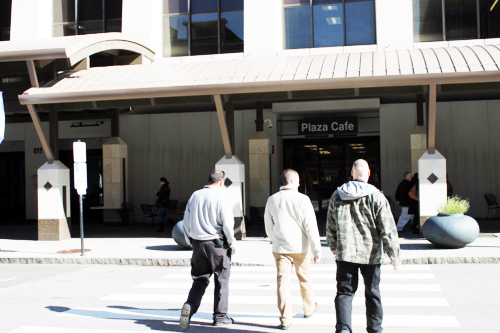 It’s my first blog of 2013, and well, I wish I had one for you exploding with praise. Instead, it’s on a joint that’s mostly unremarkable. I’ve passed the Plaza Café many times while wandering in downtown Raleigh. It seems ideal for grabbing food in a hurry, only giving up a few of your minutes while they make it to go. For order-at-the-counter spots embedded within downtown buildings without much personality like this one, I expect fresh ingredients but not necessarily quality ones and I don’t expect creativity. That’s basically what I found at the Plaza Café. It has a typical selection of salads, cold and warm sandwiches, and wraps 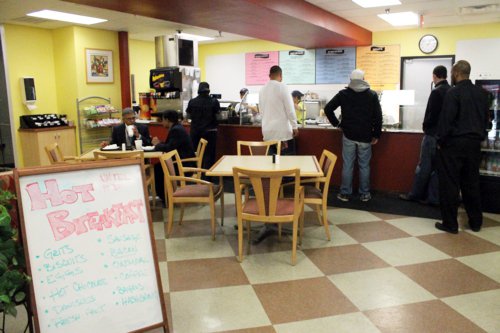 What that means is everything’s cut up ahead of time. They just assemble your order and apply some heat as necessary. The list of breakfast items is appealingly cheesy, greasy, and bacon loaded, which is perfect for those breakfasts when you’re in a hurry and nothing else will satisfy. But I didn’t try breakfast. I was there to pick up a quick lunch while helping my husband at a conference across the street. We shared a sesame chicken salad and a chipotle wrap.

I was presently surprised by the tastiness of the sesame chicken salad. 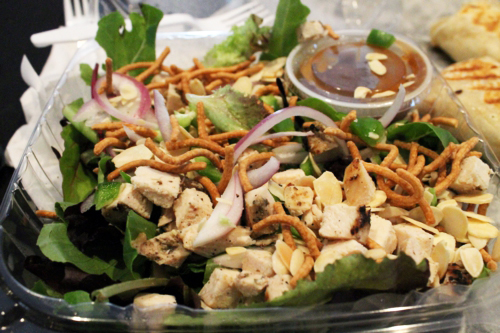 It contains grilled chicken, fried chow mein noodles, sliced almonds, a mix of baby greens, and chunks of green bell pepper. What they did well was have the chicken cut into bite-size pieces, not too big or small. All the vegetables and toppings tasted fresh and were crunchy when they should have been. The sesame-ginger dressing was exactly what I want for a standard Asian-style salad: thick, tangy, sugary, and far more delicious than I’m proud of, frankly. The only complaint I have for the salad is that it was much heavier on the chicken side than the lettuce side.

The chipotle wrap was not as pleasing. 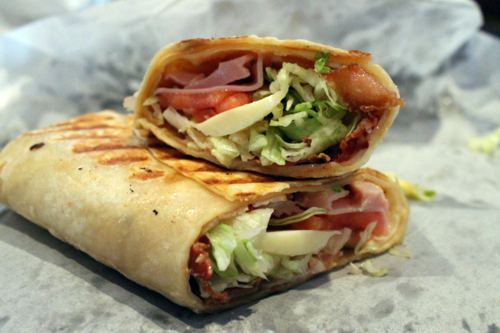 As you can see, it was skimpily filled, and the shredded iceberg lettuce and hothouse tomato used were nowhere near as crisp and fresh as the veggies on the salad. The bacon and turkey were not memorable, but the ham did have considerable flavor. I liked that the tortilla was pressed but it wasn’t toasted long enough to do more than warm the provolone cheese. I could not see the chipotle sauce, but its kick was appreciable and welcome.

I’m wary of a place that offers chicken wings as their daily special, and the sandwich was not up to snuff. But the salad exceeded expectations, and the speed of service was awesome. I think Plaza Café is probably best suited to those quick grabs for breakfast and lunch when easing hunger is your most important concern. I think most folks would likely find a favorite one or two menu items and stick with them.