Posted in : Events, Travel Guide for Chapel Hill - NC, Travel Sponsored Stays and Tours on November 16, 2012 by : The Gourmez 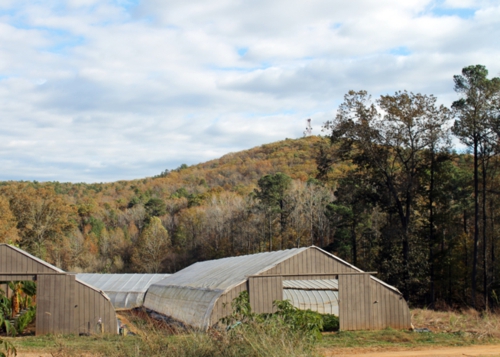 It was a whirlwind day on the media farm tour, but our last stop still arrived sooner than expected. I may have been lulled into laziness by the delicious food at Boxcarr, the previous stop. Coon Rock Farm was our final destination, and it’s owned by Richard Holcomb and Jamie DeMent. 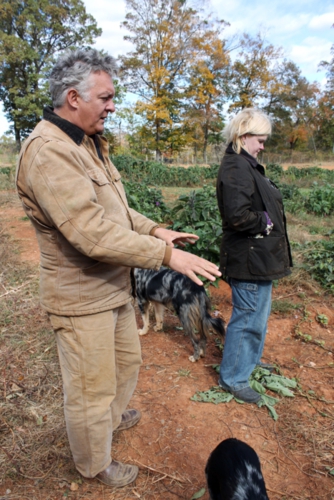 The farm is organic, and its production is equally divided between raising crops and raising animals. It’s nestled on the Eno River and consists of 55 acres, which is large enough that the owners run a program of interns, mostly college students, to help with its day-to-day activities.  At this time of the year, they have 3 to 4, but at the height of growing season, they may have as many as 15. 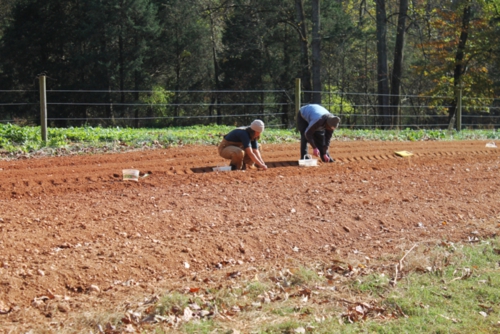 A few of those interns planting onions, garlic, and other vegetables for harvesting the green varieties in early spring.

Coon Rock Farm, like many that take a sustainable approach to agriculture, has partnerships with other local businesses. Richard partly owns Zely & Ritz and Piedmont, two restaurants that feature all organic produce and sustainable meet, and the food waste is in turn used by Coon Rock Farm for compost. They also use chaff from Counter Culture’s coffee production as mulch for their blueberries. 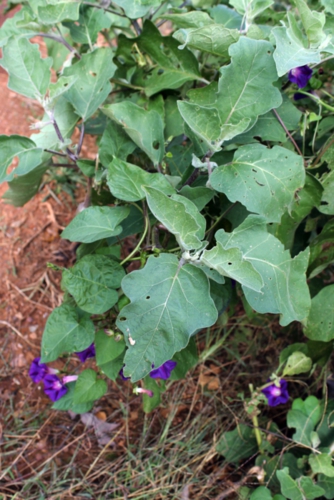 Not blueberries, but blue blossoms from weeds that they let sprout up as feed for the animals.

Richard grew up farming, and his expertise was obvious as he guided us. Their balance between raising animals and raising crops came across to me as a very cyclical, efficient process. They refer to it on their website as “intensive rotational grazing.” At any given time, some of the acres will be producing vegetables and some will have been harvested and the animals moved onto them to clear away the remainders and any weeds they find tasty.

The sheep had been through here recently. 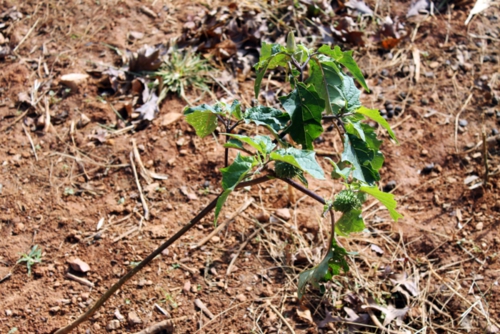 The animals are moved multiple times a week, and they are 100% grass fed. Not long before our arrival the sheep had been taken through a Spanish peanut field, and Richard explained that they cleared it of other greenery but left the peanuts intact underground. 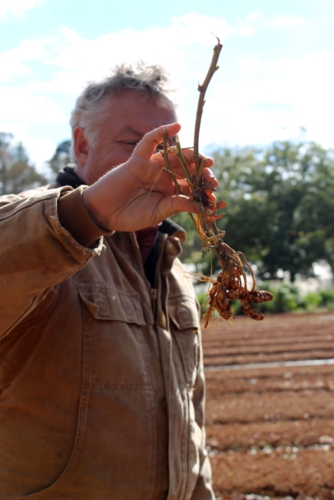 Richard showing off some peanuts.

Most of their sheep are Dorpers that need no shearing, but this specific group was Tunis. 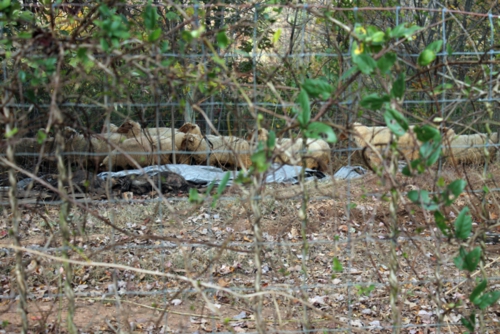 As seen from afar.

They can be hard to raise because of parasites, but if they are moved regularly, then the cycle of those parasites can be broken, usually allowing 3 months before bringing them back to any ground they’ve covered before.  The dogs on the farm are primarily for herding and guarding the sheep. 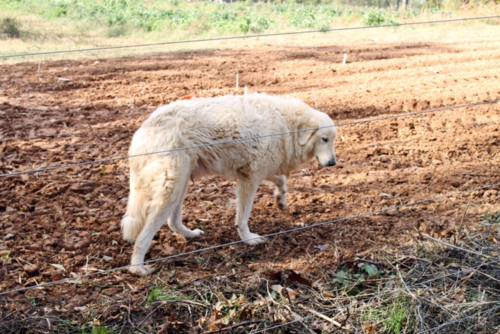 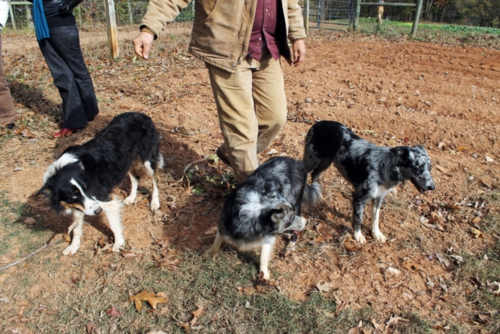 We were led to a garden mainly growing leafy vegetables at present, though by now, temperatures have probably fallen too much to continue production. Baby lettuces are one of the most profitable crops, and Coon Rock Farm grows them in several different plantings throughout the year. 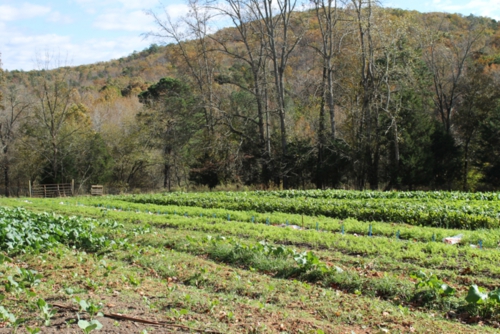 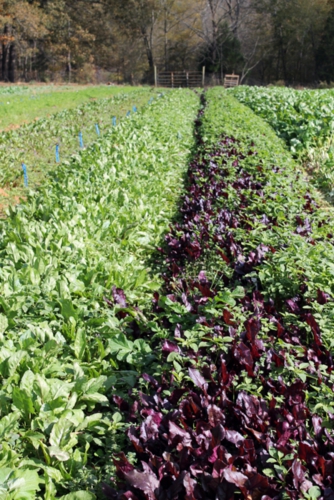 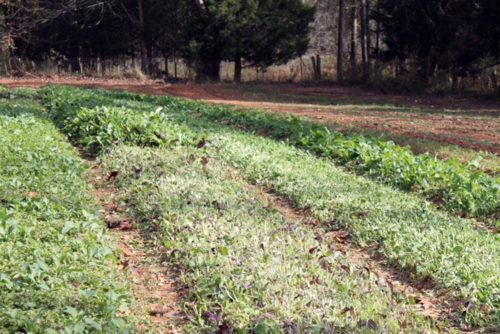 In that last picture, you can see where the leafy greens were recently picked to package and send out versus the higher, still untouched plants in the back

In this winter garden further afield, 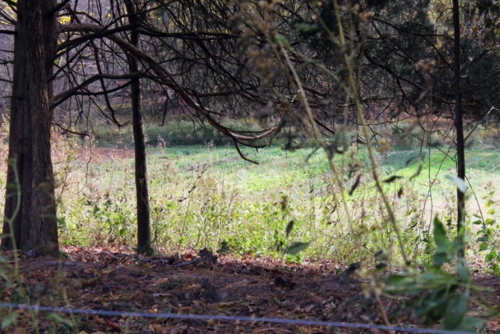 chickens are presently contributing to the fertilization process. They are led to small sections to feed, then those small sections are planted and the chicken manure composted into fertilizer for those plants. 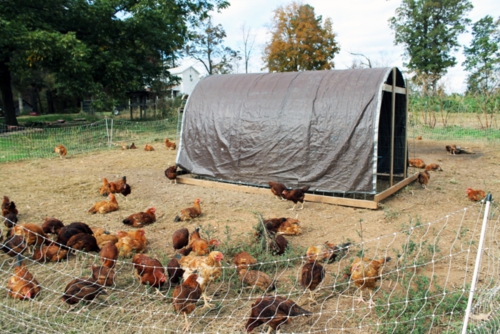 Most of the chickens we saw were Bronze Rangers, a variety similar to the celebrated Label Rouge breed from France. They take about twice as long as factory chickens to reach 4 lbs., at about 12 weeks. Mixed in with them were darker, heritage birds primarily kept for laying eggs. 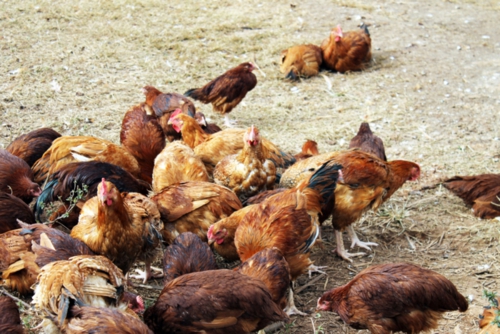 They start laying eggs at 20 to 22 weeks old.  Richard said all the chickens go to town during Japanese beetle season. It’s their favorite time of the year. 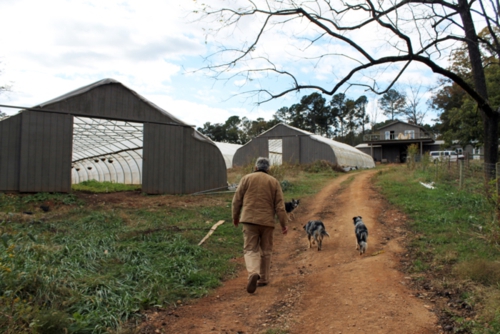 Richard with the border collies leading the group. 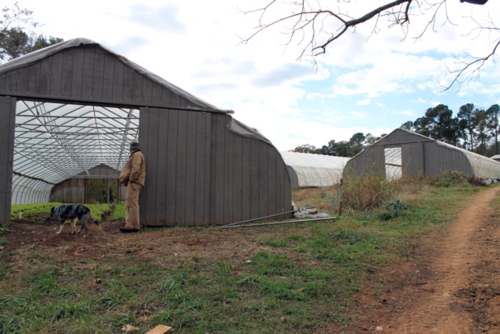 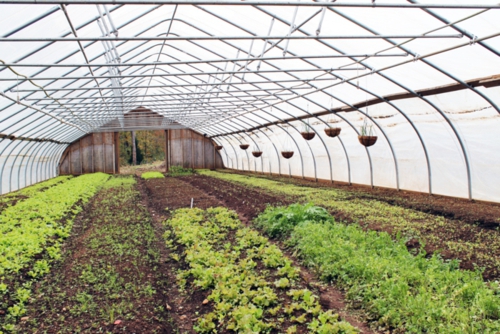 They have very high ceilings to capture the heat of the sun, resulting in a 5 to 7 degree temperature difference. In summer, they can get up as high as 130 to 140 degrees, making growing any crops difficult. Richard was experimenting with tropical plants in one of them, raising some palms among North Carolinian ginger plants that were still harvestable. 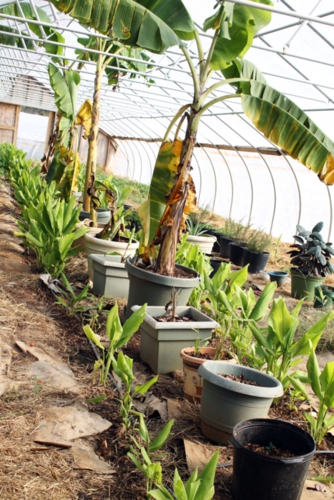 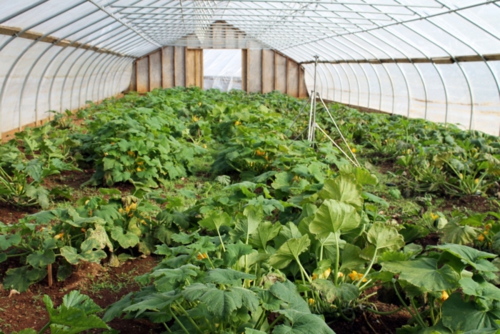 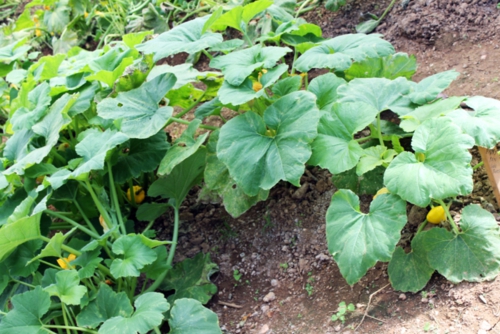 See the patty pans peeking through the leaves? 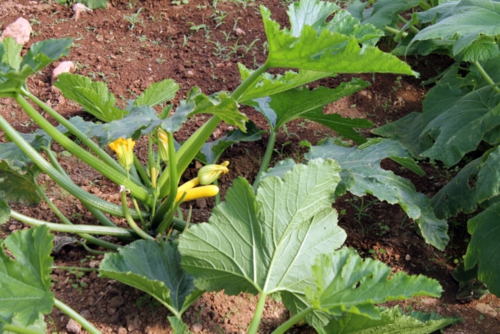 Oblong summer squashes on this bush.

We took one more detour into another portion of the farm—the pig pens. 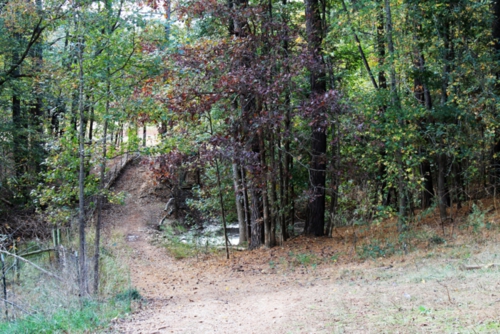 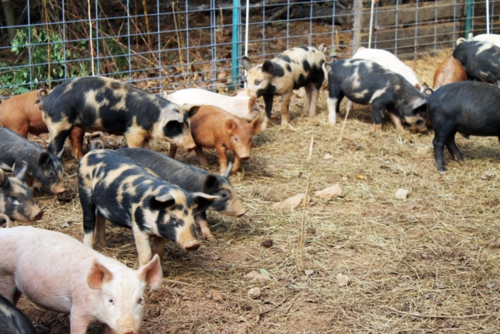 Those were all young pigs who Richard said were rather put off by being separated out from the adults. Just like the ones at Boxcarr, their mad dashes back and forth made us all laugh. Perhaps it’s less of a laughing matter to then be led through the slaughterhouse, but that’s all part of the operations at Coon Rock Farm. 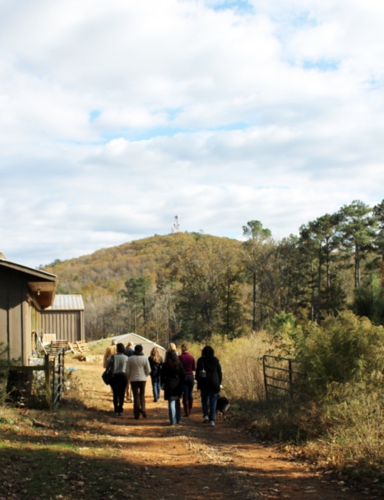 Our group heading toward the slaughterhouse on the left. 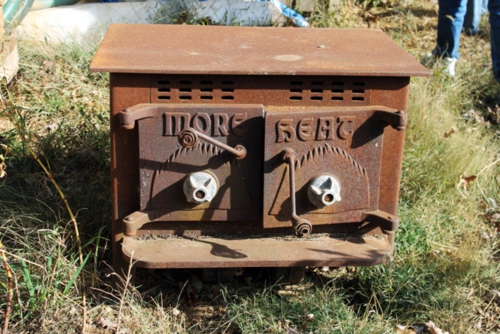 A stove we passed on the way. I love the “more heat” motto on it.

This building also housed a bunch of younger chickens and ducks that weren’t let out yet to free range. They need to be kept at 95 degrees until they get all their feathers in so they can be warm. 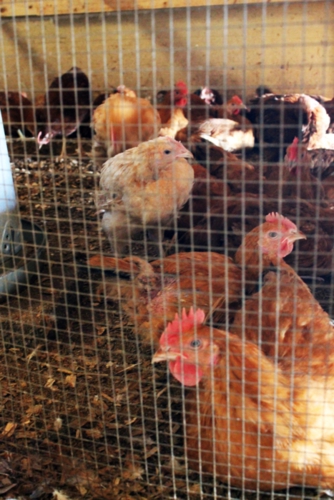 Further in were the refrigerated lockers for meat with chalkboards indicating produce and meat orders to fill. 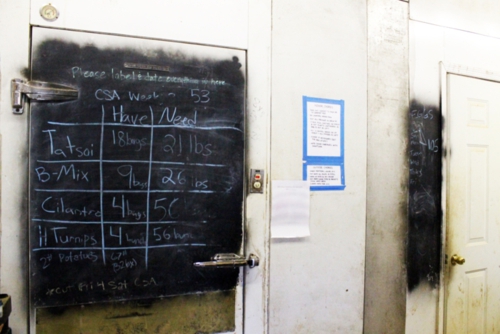 That was all very familiar from my days in high school when I used to lead groups of nervous eighth graders through our school’s slaughterhouse so they could recoil at the hanging, draining animals that kids in our agricultural classes learned to raise, slaughter, and chop. We just walked past the doors to the meat lockers here, but those memories sure came back! 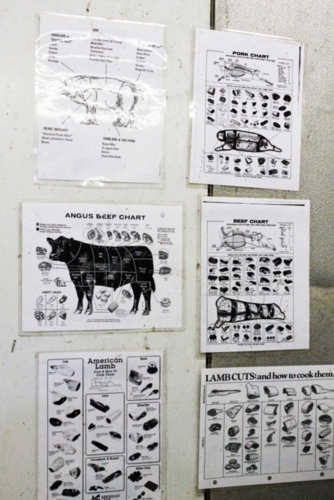 Guide to meat cuts on the slaughterhouse walls.

The farmers handle the chickens at Coon Rock Farm, but their facilities aren’t really large enough to take care of the larger animals in-house. I didn’t catch who they used to process most of their meat, but they do use Weeping Radish for any cured meats they offer as it’s one of the few that provide that service in the state. 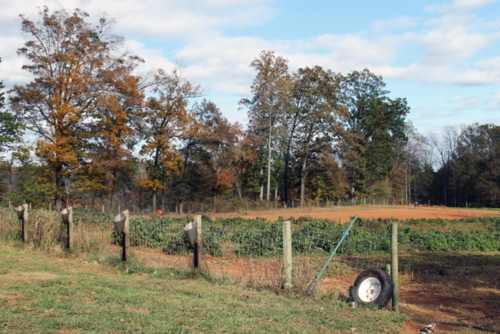 I was impressed with the systems Coon Rock Farm has set up to operate as sustainably as possible, taking care of both their soil and their animals, giving them as full of a life as possible. Just keeping track of everything they are growing and where all their animals are at any given time was impressive enough for me, much less running the place.

There’s no question about it, I’m a city girl. But I’m grateful for the people at all the farms we toured and to roasters like Joe Van Gogh and proprietors like the team at Southern Season who take that more active role in ensuring the food we eat meets ethical guidelines we can live with while reaching a quality of taste we salivate over.

Special thanks go to Colleen and Keith Minton, Colleen for organizing the tour as well as all of TerraVITA and Keith for acting as our driver for the day. Participation was complimentary, and I am so happy I was able to accept this year. Next blog from TerraVITA will be from the Sustainable Classroom. The first one is on chocolate and coffee pairings, featuring Carrboro Coffee Roasters and Videri chocolate.