Back in July, I attended a wine tasting event at the Angus Barn promoting wineries from Virginia. It was very informative and a great preparation for my trip to Charlottesville a few weeks later. Well, the VA Wine Board was back in town a week and a half ago, and this time they set up in Fox’s Liquor Bar in downtown Raleigh. 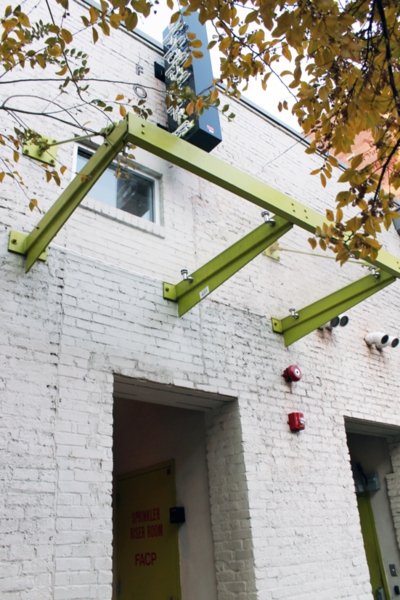 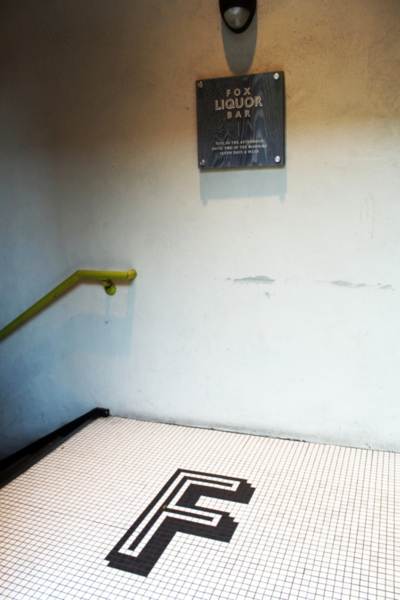 Fox is located beneath Beasley’s Chicken + Honey, and it’s one of the three new spots opened by Ashley Christiansen last summer. This event was again complimentary and was hosted by Barbara Ensrud of Be Wine Wise. I arrived almost at the end of it, so I had to rush my way through those wine tastings, but I was still happy to see a few familiar faces and meet new wine purveyors from Virginia. First, I went to the Barboursville Vineyards table, where Brad Beavers of Country Vintner wine consulting was doing the honors. 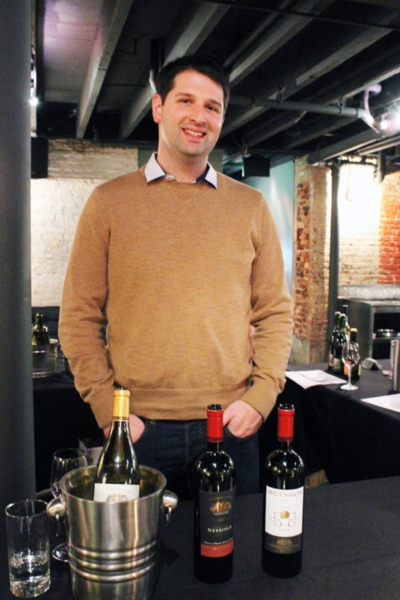 I had tried their Nebbiolo Reserve and Octagon XI in July, so I only opted for the 2011 Viognier Reserve this time. It is aged in stainless steel in aim of producing a fresher, cleaner taste. I think they succeeded at that. The fruit notes were bold and nectarine specifically came to mind. I’m not that big of a white wine drinker, but this is one I’d be happy to have again. Brad was also a pleasure to speak with.

I passed over Foggy Ridge Cider and the charming Brandi Gray who was sampling their wares because I’ve tried them all before, but I will plug their Serious Cider anyhow. I just had it again at Fullsteam on Sunday, and I cannot say enough how nice it is to have apple ciders that are dry rather than swimming in sugars. If you’ve waved away ciders because of that sugar content, give the Serious a try.

Trump Winery was next, and Kerry Woolard, their general manager, poured my tastes. This winery had not been at the previous event, and Trump is their winemaker Eric’s surname. I’m certain he’s far more concerned about perfecting his Bordeaux blends than he is about birth certificates. Half of Trump’s productions are sparkling wines, and that’s where we started this tasting, with their 2008 SP Blanc de Blanc. It’s produced in the Method Champenoise and is 100% Chardonnay. Their tasting notes describe the nose as pear with a biscuit aroma. For me, it was more like almond. The wine is very dry, smooth, and has those pleasant tiny bubbles you expect of this style. Their 2010 Sauvignon Blanc was not for me, but Sauvignon Blanc rarely is. The 2007 Simply Red was a treat for me, however. It’s a…wait for it…Bordeaux blend with merlot featured most prominently. I thought it lovely all around and especially enjoyed the chocolate notes in the nose.

Kerry also sampled their Cru, which they are selling as an aperitif. It’s a blend of Chardonnay grapes with Chardonnay brandy that is aged in bourbon barrels. 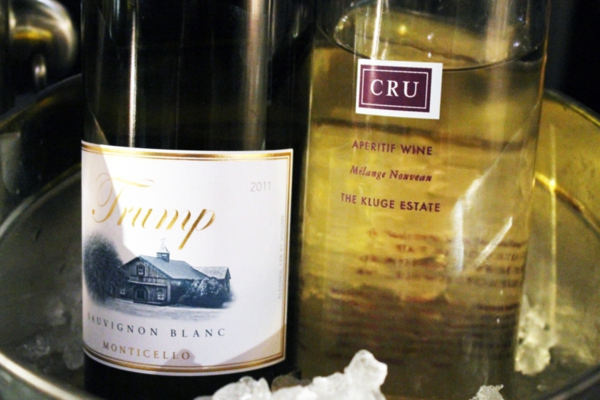 It’s on the right.

The Cru was not overly sweet, which I prefer, and the mesquite elements from the bourbon barrels were quite tasty. It’s a nicely balanced aperitif. You can give it a try when Trump expands distribution in NC statewide next year.

Ingleside Plantation Winery held the familiar face of Chris Flemer who had been at the July event. I had really liked their 2007 Petit Verdot, and this time, we tried the 2008 instead.  It has a lot of personality and is very drinkable, although I may have preferred the 2009 Sangiovese this time for its smooth tannins. All black label reserve wines from Ingleside are aged to the point when the winemaker feels the tannins have reached their proper balance, and those were what we sampled at this event.

I came to the Boxwood Winery table just as Rachel Martin, their executive vice president and resident promoter for the family-owned vineyard, was packing up. She was happy to put that off for a few more minutes so I could try her wines. 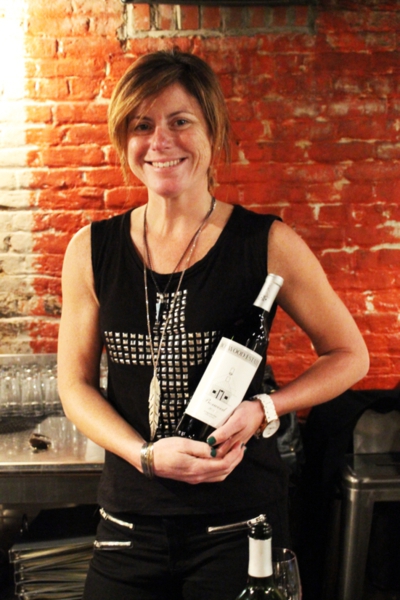 In Virginian wine terms, they are newcomers, first planting their vines in 2004. They follow a different Bordeaux blending style for each of their wines, using 5 varietals in all. The vineyard is sustainable, and they only produce 2500 cases. 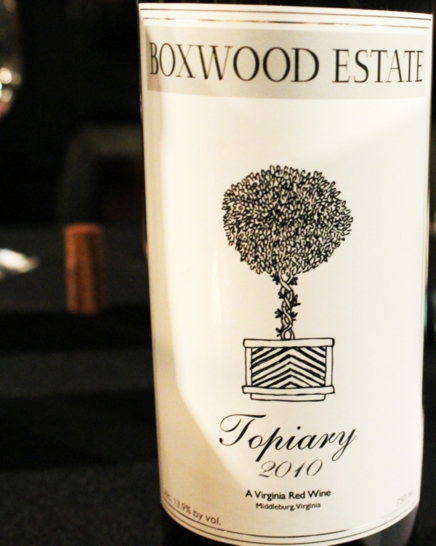 I tried the Topiary first, and I must say, I love their label art. The wine was densely, darkly red, and Rachel explained that is the result of the bleed they do of the grapes. For me, the wine was too tightly tannic. I thought the same of the Boxwood, though the raspberry smell was quite appealing. The wines weren’t quite there yet in aging, and I’ll be interested in how they turn out a few years from now. In the meantime, Boxwood as a brand impressed. Rachel’s style and that of the brand in general was fun and makes me want to give them a shot in the future.

This was my first time in Fox Liquor Bar, but it was midday, so I can’t really describe the atmosphere nor were they selling cocktails yet. But I liked what I saw, and my anticipation for trying them out in their nighttime element has increased — and it was already high. 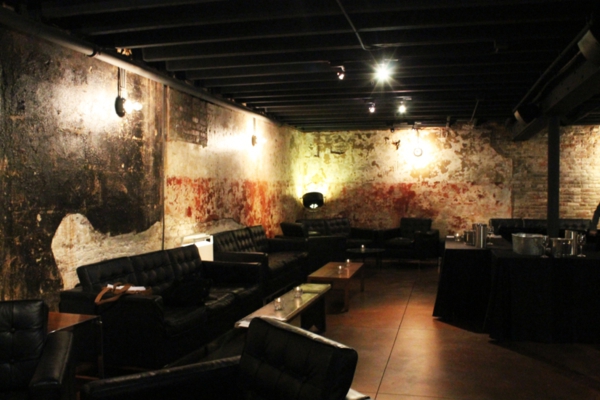 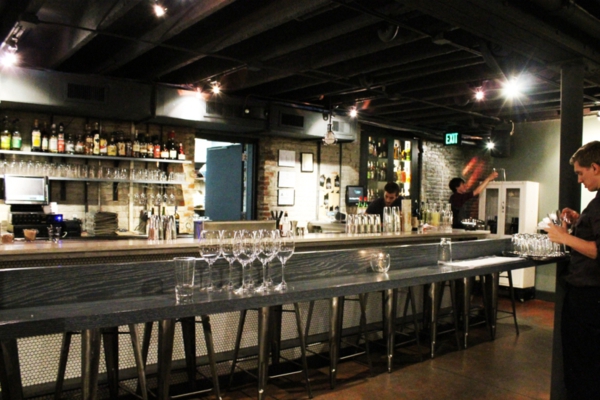 Thanks to Fox for providing the space, to Polished Pig Media for inviting me, and to Mary and Amy of the Virginia Wine Board for putting on a great event. I’ve enjoyed increasing my Virginian wine knowledge this year!