Home / Dining in Raleigh - NC / Fire in the Triangle Round 6

Fire in the Triangle Round 6

Fire in the Triangle Round 6
Mia Francesca versus 518 West

Last night was the sixth round of the Fire in the Triangle competition. What’s that, you ask? Well, it’s a six-week-long culinary adventure pitting sixteen chefs of our prized restaurants against each other. All of the ingredients for the battle come in on one truck daily, and there is a secret, North Carolinian ingredient that the competing chefs and their teams learn about at noon the day of the competition. When all is said and done, one chef will be proclaimed the victor and win $2000, among other prizes.

It takes place at 1705 Prime, which is a Rocky Top Hospitality property that’s available for private event rental. 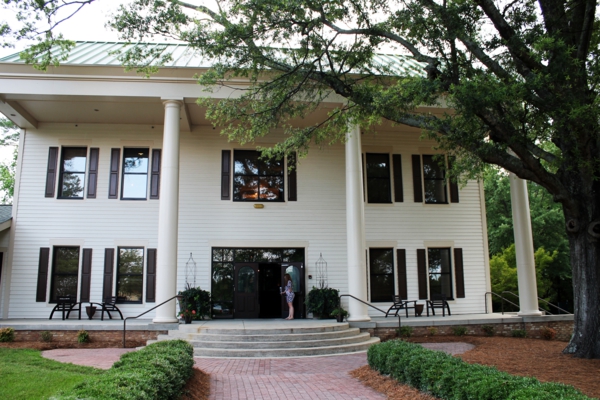 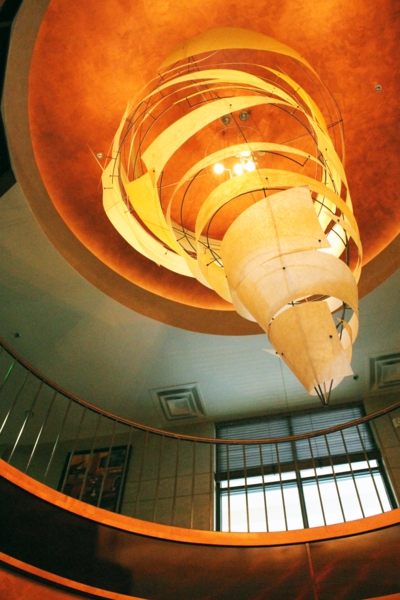 The venue was lovely, with an attentive staff in both the dining room and at the bar, where we mingled until seating began at 7. 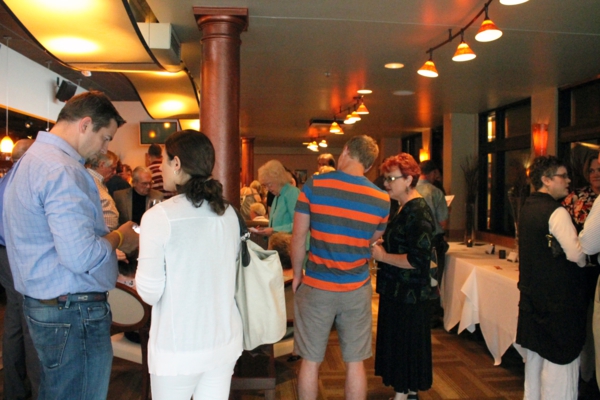 I was called in last minute to sit as one of the professional judges last night, which was awesome and also meant I was comped the $50 price for a ticket. The six dishes, three from each competitor, are judged in six different categories (appearance, aroma, flavor, accompaniments, secret ingredient creativity, and secret ingredient execution), and everyone who attends gets a vote. The general public makes up 70% of the final tally, and 2–4 professional judges get a 30% say, which means I lorded my political weight over all my fellow diners. Or rather, I spent all evening chatting up some fabulous fellow foodies about our favorite joints in the area in between rating the dishes. Speaking of . . . 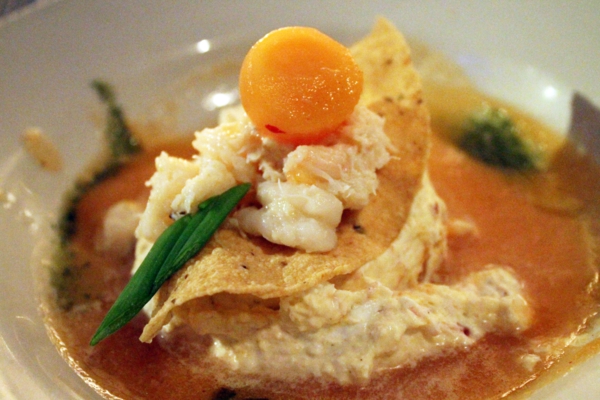 The first dish was tied for my favorite of the night. It was created by the 518 West team and consisted of cantaloupe mousse with tasso ham, chive, cantaloupe gazpacho, and cantaloupe-and-poppadum-poached shrimp. I loved it. So much. I’ll start with my only complaint for the dish: the tortilla chip. It was a nice idea to use it to contrast with the otherwise soft textures, but it got way too soft too fast. Putting that aside, it was amazing. The mousse was so creamy, shrimp perfectly poached with imparted cantaloupe flavor, and the vibrant gazpacho left a lasting impression. I tasted no ham, but I didn’t miss it at all. Loving it meant a 20/30 score, an interesting quirk of the rating scale having all six categories count the same. If it were me, I’d give flavor a 30% weight compared to the rest of the dish. Oh, and in case you couldn’t tell, cantaloupe was the secret ingredient. 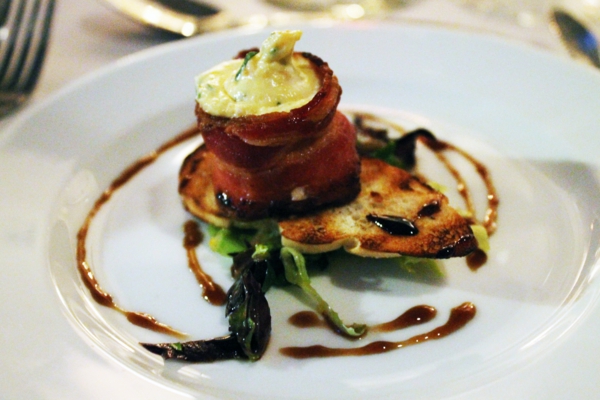 That is Course #2 from Mia Francesca: bacon-wrapped cantaloupe with goat-cheese mousse and a balsamic reduction. Flavorwise, this dish was excellent, but in terms of secret ingredient use, it was a bit uninspired, pulling an 11/20 overall from me, my least favorite of the dishes in terms of score, but not in terms of flavor. If the bacon were a thinner slice, that score may have improved exponentially. As it was, the bacon flavor overwhelmed that delicate cantaloupe.  The balsamic and greens were delicious, but they felt like more of a side dish than part of it. I would love it in a restaurant, but as part of the cantaloupe battle, it fell short.

Next up was the cantaloupe crabcake from Chef Reto von Weissenfluh and the Mia Francesca team with grilled bok choy, cantaloupe crème fraiche, and melon-glazed shrimp. 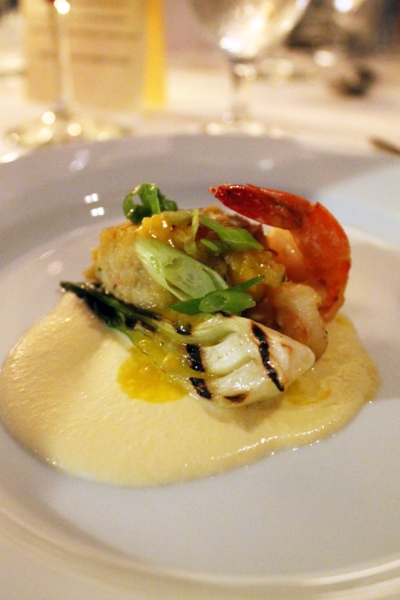 First off, the shrimp was wonderful. It reminded me a lot of the sweetness of coconut shrimp without all the, you know, coconut.  Otherwise, this did not score high with me (13/20), though interestingly, the other professional judges dug it. For me, the problem was the crème fraiche sauce—it was cold, and that did not compliment the warm crabcake or shrimp at all.  The crab was too strong for the cantaloupe (do you sense a theme in my critiques?), though it made for a perfectly fine crabcake otherwise.

Onward to Course #4 from Serge! 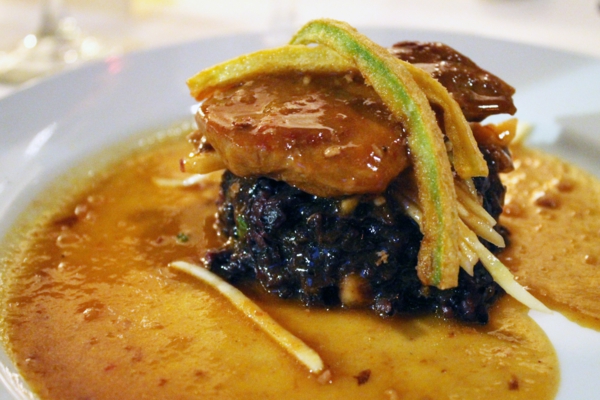 It was a braised pork tenderloin with adobo and cantaloupe jus, celery root slaw, forbidden rice risotto, and fried melon skins. This one received major points from me (17/30) for secret ingredient creativity—they fried melon rinds, y’all—and aroma. It was a rich, tempting dish. The pork was impressively tender for not a lot of roasting time, and those rinds were far more successfully than I expected. However, the forbidden rice risotto was overcooked and there was too much of it, overwhelming the rest of the ingredients. If it were decreased and the pork and celeriac slaws increased proportionally, it would have been amazing. As it was, pretty good is apt.

Both of the desserts were amazing, however. 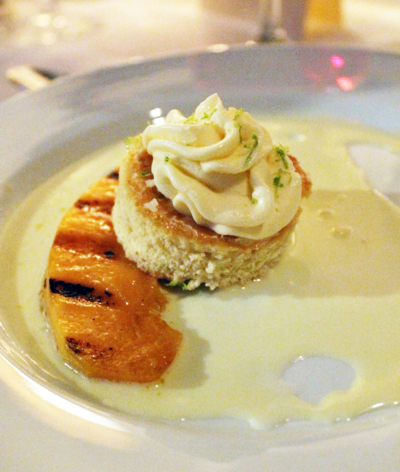 The first was a lime gateau roule with cantaloupe buttercream, tequila anglaise, and grilled cantaloupe, made by Serge and the 518 West team. This tied (20/30) for my favorite of the night—apparently, I diverged from popular opinion by enjoying it more than the second dessert! This does not bother me.

Let’s talk salt for a moment. I have an extremely low salt tolerance, judging from my average fellow American. But when salt is used well, it is absolutely worth praising, and this dessert is an example of that. If I had to guess, I would say Himalayan pink salt was used in the buttercream. Wherever it came from, the salt was in just the right proportion to tie everything together brilliantly. I was skeptically of the thick, dense, lime-packed roule at first, but with the sweet cantaloupe buttercream and the savory cantaloupe slice, it worked wonderfully, especially with that salt binding them all together. I’m not that big of a buttercream fan, but mixing in some cantaloupe made each bite more interesting than expected. I think the tequila anglaise would have benefitted from more alcohol, but otherwise, I was very satisfied by the time I finished my plate.

Course #6 was only mildly less satisfying for me, but it won the best dish of the night for everyone else. 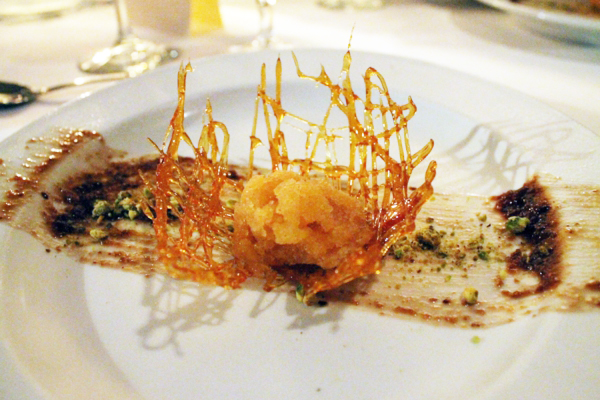 That’s gorgeous, of course, but I think that I’ve seen enough sugar art that the presentation did not wow me as much as it might have.  This was Chef Reto’s dessert, a melon and lychee sorbet with fig compote and pistachios in a caramel bowl. The caramel bowl is that fancy sugar art, and ultimately, if it were half the size, it might have excited me more. As it was, I still gave it a 15/30, my third-highest of the night. As with Course #5, the first few bites of individual elements did not impress me, but when I broke off some caramel and ate it together with the sorbet, fig compote, and nuts, the pop of flavor was thrilling. I did not expect all those strong elements to go together as well as they did, but I was wrong. However, the caramel nest was sticky and clumsy to eat, and there really should have been another small scoop of sorbet to get a good handle on it.

The winner, by an amazingly small .06 points, was Serge Falcoz-Vigne of 518 West.  You can view the full results here. Both chefs did excellent work, but I preferred Serge’s dishes, especially that first dish, so I couldn’t be happier with the results. Thank you, Competition Dining, for inviting me out, and extra special thanks to Got to be NC Products, Our State magazine, Southern Foods, Crippen Country Inn and Restaurant, Pate Dawson Company, Whole Harvest, the NC Department of Insurance, and Hitstech.net for sponsoring Fire in the Triangle.

Now how will I adjust to being a regular member of the public when I attend the second round competition in a few weeks? This professional judge weight has already gone to my head.

One thought on : Fire in the Triangle Round 6