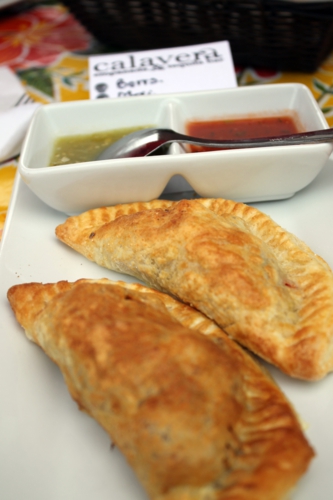 Calavera is an empanada and tequila bar that—praise the lord—has a kitchen that stays open until 2 am. This is a wonderful, wonderful thing, as any night owl would tell you. Quality empanadas as a late-night snack? It’s divinely inspired, and Raleigh is lucky to have this joint.

Despite my worship of their hours, I actually tried Calavera for lunch. It has two stories, and the indoors is an inviting, warm red with Day of the Dead décor. However, it was a gorgeous day, so we dined at the outside tables. 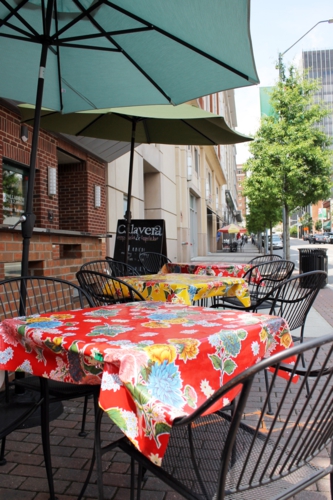 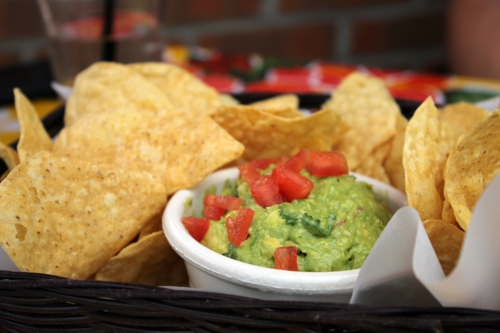 That guacamole starter was great—I was about to write that it’s hard to screw up guacamole, but as my memory reminded me, it’s frighteningly not that hard.  Calavera’s doesn’t overwhelm that pure avocado glory with too much garlic or too saucy of a texture. The chips were fine, but I’m pretty sure I saw a truck unloading chips from On the Border while we were there, so they don’t make their own. It doesn’t really matter, but chips fried in-house always get a freshness boost.

I appreciated that horchata was counted as one of their regular drinks, so I could have it with my combination for no extra charge. 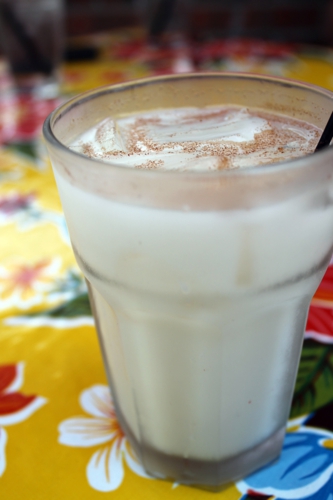 I did not appreciate its thinness. I’m hard to please when it comes to horchata, because I like it just shy of thick. This one also didn’t have a lot of spice. No matter, the empanadas made up for it. I ordered two: the New Mexicano and the pollito borracha. The accompanying salsas were pretty standard. 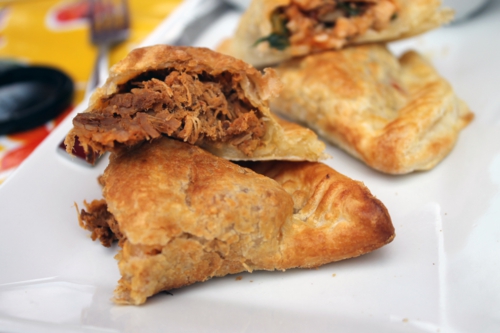 That’s the New Mexicano, roast pork spiced with New Mexico chiles. First, the shells were cooked perfectly. They were soft enough that I almost thought they were undercooked, but as I tasted more, I realized they were just right. Buttery, flaky, golden brown, and delicious. The pork was tender but was a little too mellow for me. The pollito borracha was more my style. 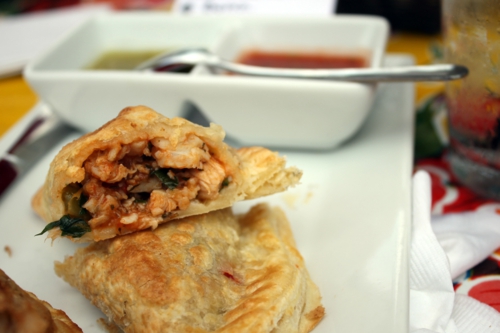 That one is free-range chicken (I have no idea about the pork’s ranging) marinated in Modelo and cooked with bell peppers and herbs. That marinade made for juicy chicken with plenty of company in terms of flavor from the herbs and peppers. I recommend it.

I also recommend ordering three empanadas for a full meal. Two are better if you just want a light meal, but I’m still sad I didn’t try one of the sweet options—they have one now called the King of Kong with banana, Nutella, and sweet cream. No matter; I’m sure I’ll make up for that after catching a rock show downtown one of these evenings, when I crave a bite . . . and I’ll be able to get one! I’ll also dig into their tantalizing drink list and only somewhat overpriced tequila shots. Compared to most tequila bars, they are a steal. That should make up for the horchata.