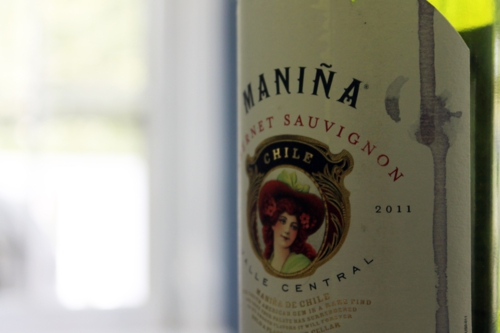 The Maniña Cabernet Sauvignon 2011 tastes prominently of cigarettes. Leather and smoke may be a better approximation. Think of it that way— it’s more appealing. On drinking, piquant berry is the first flavor. Apricot, gooseberry, and sandalwood are also present. The smoke is dominant; I’d wager that it’s aged briefly in charred barrels. Frankly, I think it’s almost as smoky as Fullsteam’s Hogwash Ale, which is made from hickory-smoked barley.

The wine mellows some with airing, transforming the smokiness into more of a grassy or floral quality. It’s too big of a wine for me, honestly. But I’m drinking it anyway.

Apparently, I’m the only one who’s thought about this one.