Ben and I spent the first two weeks of October in California, using the Adobe Max conference as an excuse for me to be back home, visiting friends and family in Los Angeles and Santa Cruz. First stop was my sister’s new pad on the beach at Playa del Rey. Let me tell you folks; it didn’t take me long to remember why I love CA when I saw her view.

Head here for the full panorama. In other words, my sister’s setup is sweet!

Having heard of so many impromptu performances at this mystical shopping land called the Grove, near downtown LA, I requested that we spend an afternoon there this trip. And so we did! 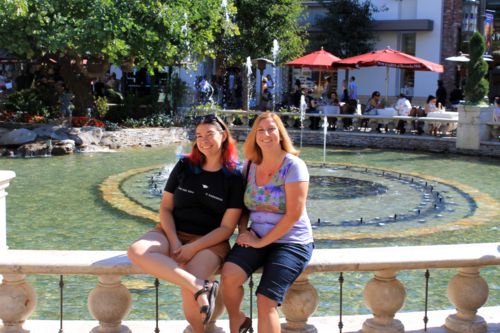 That’s my sister and me at the fountains right after you exit the parking deck. What’s the Grove, you ask? Well, it’s an outdoor mall, and a pretty small one at that, but it’s nicely designed and a very appealing spot to while away the afternoon. I can understand why the celebs put in an occasional appearance. 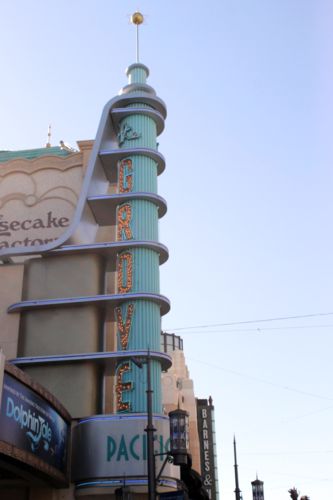 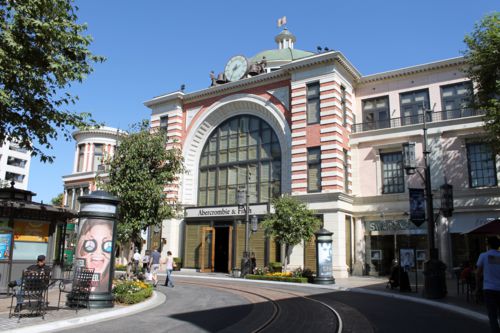 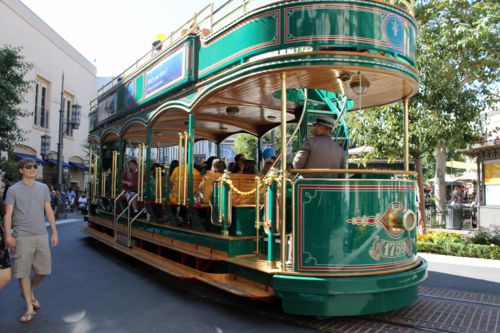 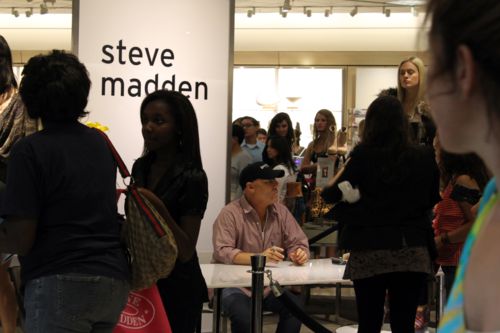 That last one is of Steve Madden, one of those celebs. He was signing his merchandise in the Nordstrom’s. I swear I saw Sarah Silverman, too, but I didn’t look too close to make sure.

Turns out that the Grove segues right into the Los Angeles Farmer’s Market, which like many markets of the world is less about produce and meats for sale and more about small eateries and bakeries. 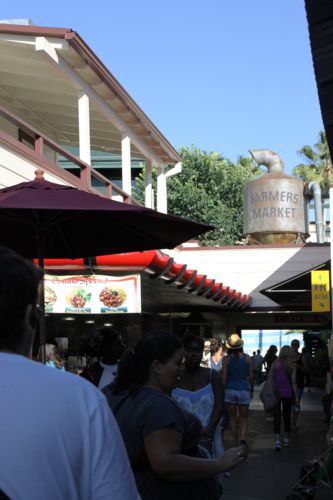 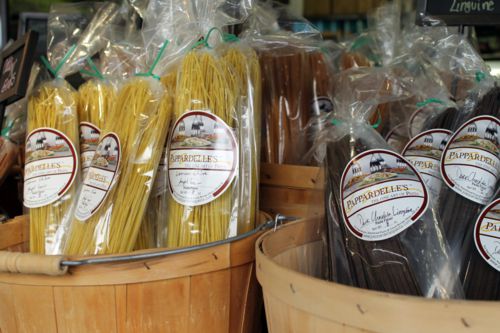 I’m still kicking myself for not buying that to check it out. With a creamy citrus sauce, it just may have been amazing. Well, how about consoling myself with cupcakes filled with frosting on the inside? 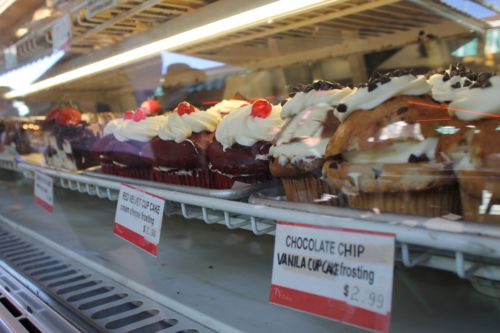 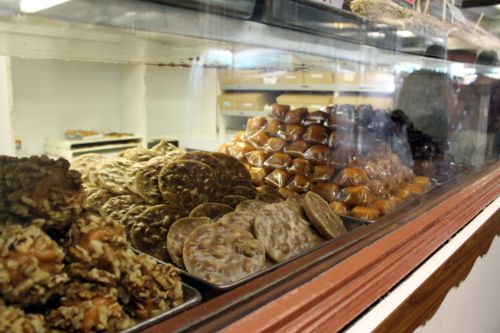 I ultimately went for a slice of rolled black forest cake. 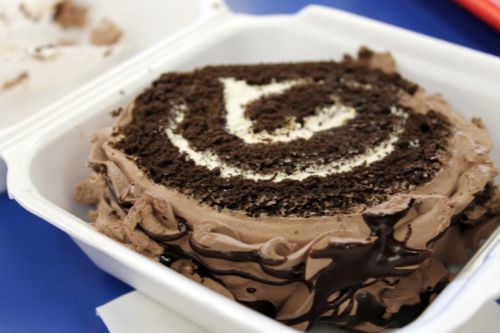 Despite the fact that there was absolutely nothing cherry about it, it was very good. My sister enjoyed some ice cream, and Ben decided there was no better place to have some lobster sushi. 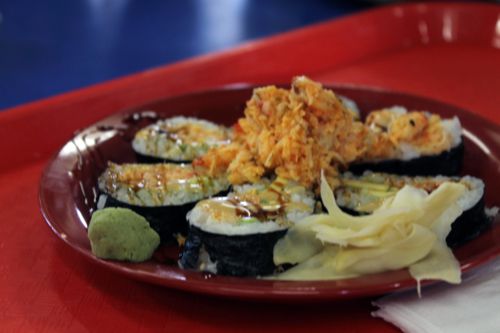 To be honest, Ben thinks everywhere is a great place to have sushi.

Afterward, we headed back to Christa’s home to walk along the beach before the sunset. Turns out Christa had no idea there were tidal pools nearby with lots of crabs, urchins, and starfish. She pocketed several complete sand dollars as well—I consider myself a lucky charm. Luckier was being able to stay with them, because again, this—

–is just awesome. Again, Head here for the full panorama. Here are a few single shots of especially scenic sections of the beach and mountains. 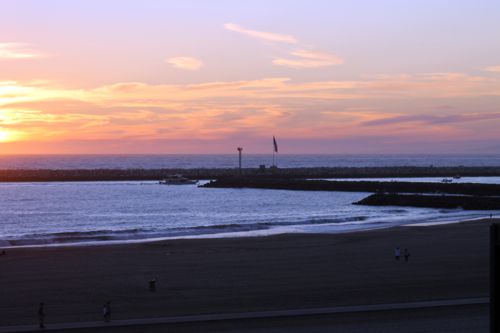 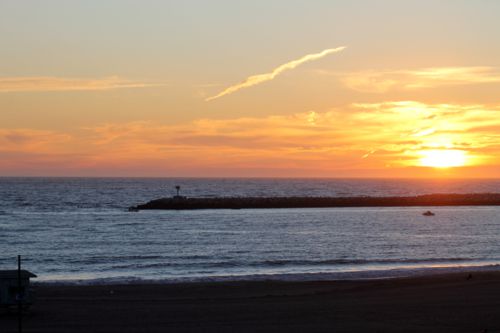 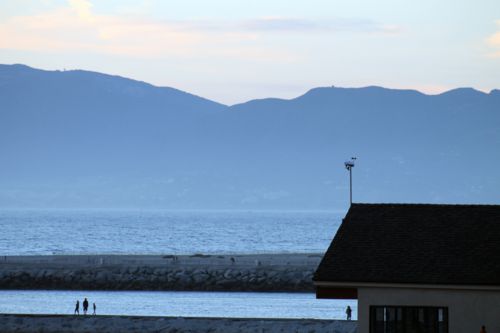 Santa Monica called for the evening, and my cousin, Daniel, and Christa’s boyfriend, Joe, joined us for dinner and drinks at a few hotspots. Dinner was at West 94th and Jane, a relaxed pub with fun, experimental versions of pub fare. Ben and I shared the sliders with tater tots. They included a Kobe beef burger, one beef brisket, and one beer bratwurst. They were all fine, but none of them caught my fancy, and my confusion at the sliders fad continues. What did taste fantastic, however, was a menu item everyone at the table ordered: the Waygu beef burger that comes with barbecue mac and cheese (huge elbow noodles with chunks of ham and barbecue sauce). I don’t have good pictures, but believe me when I say you should try it. Mac and cheese is thrown into all sorts of dishes these days, but in this case, it really did make a burger better.

Again, no pictures, but we checked out a trio of Santa Monica joints known for drinks. At the Misfit, a trendy, Rat Pack type of bar, I partook in a KD Bees Knees, a gin martini made with lavender honey infused in-house. This was a wild choice for me—gin is a spirit that’s still growing on me. In this combination, I thought it shined. My less alcohol-familiar cousin thought it was too strong, though.

We then meandered to my sister’s favorite spot, Bar Chloe, which was much more of a lounge than the Misfit, with a cool-toned color scheme and low couches and chairs for mingling at. This is definitely a spot where the bartenders take pride in their wares, though I must say, they were slower making the drinks than I can grant to artistry alone. I tried the Chamomile Mai Tai, made with chamomile rum infused in-house, curacao, orgeat syrup, and lime juice. It was a lovely flavor, very light.

We ended the night sharing some wine at Sonoma Wine Garden, which has an absolutely fabulous rooftop setup. Planning a date night? It’s perfect.

The next day, Ben headed off to preconference shenanigans, and I went to lunch at the Charthouse in Malibu with the Gomez branch of my family. It’s a beautiful location off on its own over the water—directly over the water. The whole restaurant was taken at one point with a fisherman accidentally pulling up a stingray and trying his hardest to get it back in the water (he succeeded). I was excited to have West Coast fish and chips again; the East Coast preference of breading whole filets rather than strips just doesn’t do it for me. 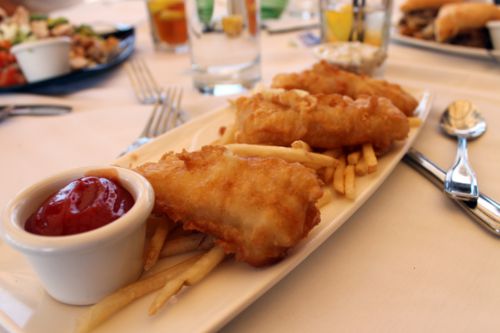 Now prepare yourselves for the family reunion shots—I hadn’t seen them in two years, which is way too long. 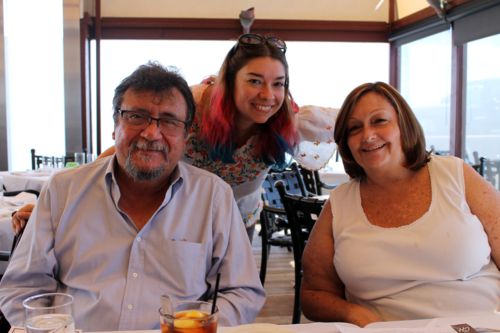 My Uncle Mike and Aunt Penny. 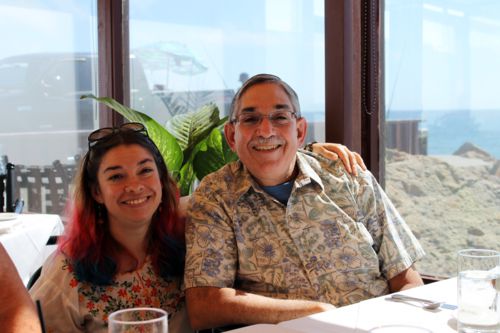 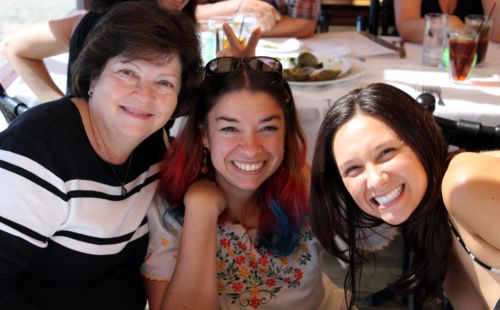 My Aunt Angie and my cousin, Breanna. 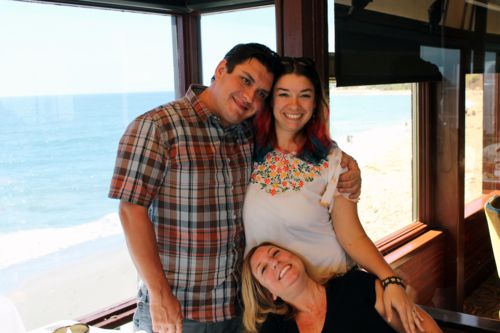 My cousin, Mike, and my sister, Christa. 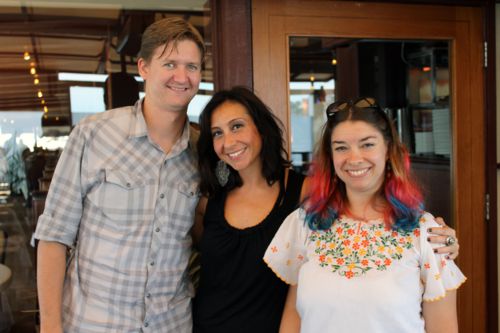 My cousin, Amanda, and her boyfriend, Bobby.
The chocolate soufflé at the Chart House was really worth it, and it’s rare I say that of a soufflé. Give yourself the time to order it!
My cousins and I headed out to Moonshadows to celebrate my cousin’s birthday after lunch, and let me tell you all, that place is a crazy scene. It’s like all the New Jersey folks with money and dyed hair coloring to burn congregate there on a Sunday afternoon, daring each other to show a little more skin in their bikinis. It cracked me up. Like Charthouse, Moonshadows is perched right over the water, and there, we were treated to dolphins swimming by. Oh California, even in the midst of overcooked beach beauties, you bring wonderful sights. It’s a gorgeous, cabana-like spot for a drink.
The evening ended downtown with great conversation with Christa and Joe’s friend, Derek, and then a stroll down Figueroa to the ICON lounge, where Adobe was throwing a party for their community group managers. That was place was swanky! I have no clue what it’s like on a normal night, or about drinks or anything because we came after the official party was over, but the view of downtown from their rooftop was stellar, and I dug the red fabric all over the place.
Next up: I discover downtown LA has a lot of pretty buildings, and a fun night with friends and macarons is had at Bottega Louie.