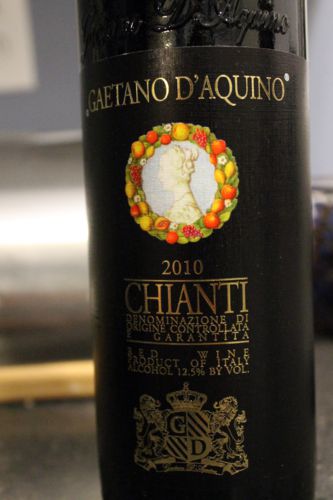 Normally, I’m a big fan of chianti because it’s mellow in a way that it makes mellow seem like an art form. This one’s not there. It smells sharply herbal with a tart berry undercurrent of currant or cranberry. It’s tart on drinking, too. There’s almost a fizz to it, but not like it has gone bad. A not-quite-ripe strawberry note is much more prominent in drinking than the dried fruits, along with strong, but thin, spices of cinnamon and clove.

It’s an interesting chianti, but not mature enough, I think.

This wine smells musty & old, and that is off putting, but it tastes ok. It even tastes better if you run it through the Vinturi. It was fruity, but for $4.99, I’d buy the Villa Cerrina. There is much better wine out there.

Nice garnet hue with forward cherry aromas with less Sangiovese aromas than previously reviewed experiences with this wine. Light notes of licorice even rising. Classic Chianti flavors with a touch of rustic earth and a bit of cedar but quickly over lapped by Sangiovese fruit.