We tried Beasley’s with a bunch of fellow foodies, two of whom are huge fans of the spot. It’s a concept restaurant by Ashley Christiansen, a two-times James Beard nominee, which is a huge honor. The space sells only fried chicken and sides. You can get that chicken by the quarter-bird in white or dark portions ($7.50), as part of a sandwich ($6.50), or with waffles ($10), but the waffles are only available in the morning and late at night. 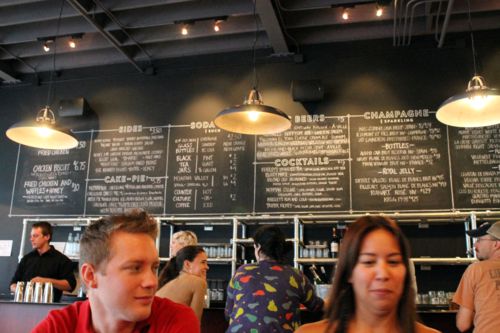 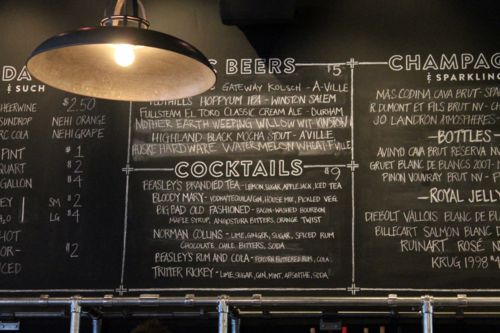 The largest focus of the menu is actually on drinks, and I think that’s where Beasley’s shines the most. There are a number of champagne and soda options and smaller general wine and beer listings. The specialty cocktails ($9) are pretty delicious. I, of course, had to try one, as did most of our group. We embrace the lush. 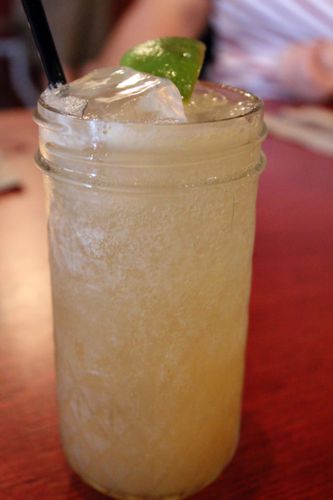 That’s the Norman Collins, made with spiced rum, ginger, lime, soda, and chocolate chile bitters. Those bitters are what pushes this drink to excellence. I’ve often found that crazy-sounding bitters combinations come off too subtly in a drink, but you could taste these prominently, and they went super well with the other ingredients, making what could be an ordinary drink into an amazing one.

Those who had their house Bloody Mary were less enthused. 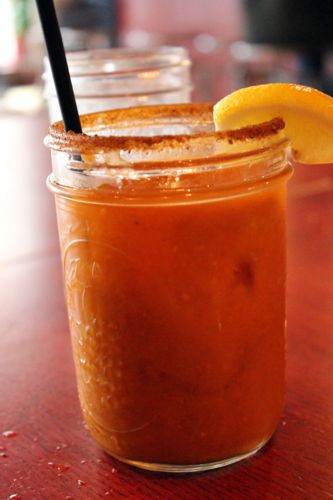 That orange color was off-putting. It’s a pretty spicy drink, but our group mostly thought it average. NOFO still gets my vote for best Bloody Mary in the area, which reminds me, I need to get back there again sometime.

Beasley’s menu is all on the chalkboard above the bar, and you must wait to be seated until your whole group is there. Seating is communal, however. There are a few dark brown tables against the wall and one long one in the center of the space. Shiny metal surfaces abound, including the stools at each table. The space is full of light and feels very open. Service was attentive, and the food came out super fast—I imagine organizing your restaurant around one main item streamlines the process nicely.

How was that chicken, you ask? Well, it brought up quite the debate as to what makes a perfect fried chicken among our group! 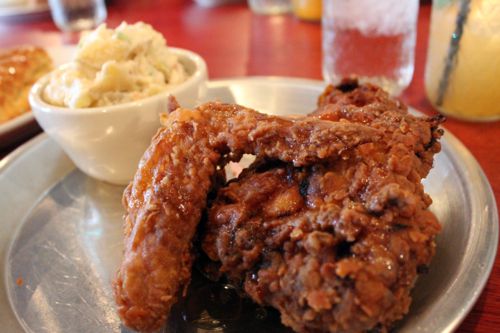 As you can see, it comes with a spoonful of honey on top, which some people dig but I thought was unnecessary. The chicken was fried well; it’s on the greasier side and is fried until the coating reached an almost reddish coloring. Tastes great, but I have to say, I think Dame’s chicken knocks it out of the park. That was the subject of our debate; which was better? Those two big fans I mentioned earlier voted for Beasley’s and weren’t that impressed with Dame’s style, which is a more compact, crunchier coating that isn’t at all greasy. The other four of us definitely came out on Dame’s side, although both are perfectly good options if you have a fried chicken craving. It comes down to if you prefer a greasier fry with a looser coating or a crunchier, more clumped, nongreasy one.

The sides options were an interesting mix, most of which impressed us. However, they are $3.50 each, and I think that’s at least a dollar more than they should cost. If you want more than one to go with your chicken, you’re talking $14.50 for the full plate. Some of the portions seemed worth that, but some didn’t. One that definitely did in flavor though not in portion size was the Big Bad Bacon Yukon Potato Salad pictured a little better in this picture than the last one. 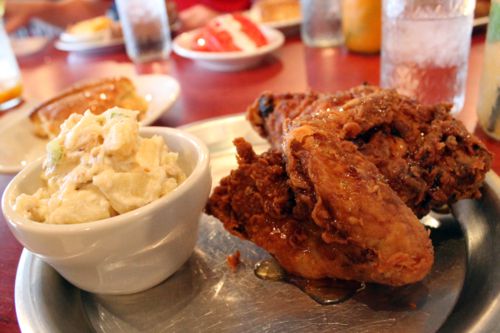 It’s bursting with flavor, folks. That smoky bacon, the scallions, the tasty dressing! The biscuits with honey, though, were really not worth the price. 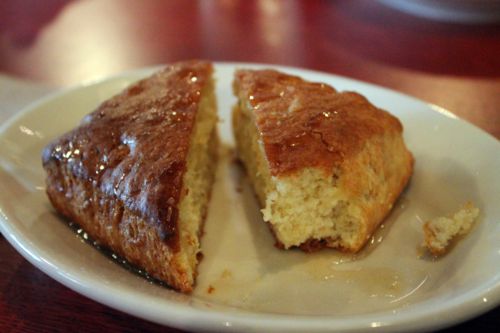 It’s a good biscuit, but nothing special. Dense but not overly dry. The macaroni and cheese soufflé was better received, as were the heirloom tomatoes with a malted mayo sauce. 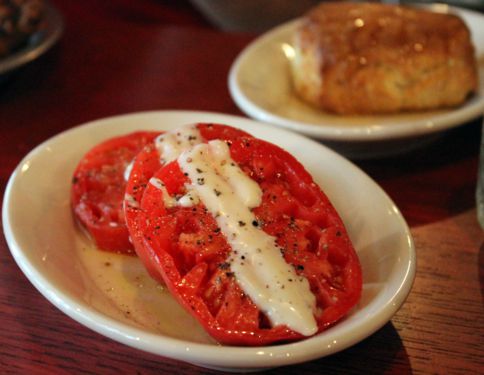 That much tomato is going to cost you $3.50 at the grocery store, so it’s a good deal for sure. I didn’t try it, though.

I like the unique twists on Southern classics that succeeded in the side dishes, and the chicken is definitely good, though the batter’s a bit bland. Ultimately, with those prices and the fact that I don’t crave fried chicken all that often, I’m more inclined to think of Beasley’s as a late night spot for good cocktails, where I can also get something to munch on if I’m in the mood. I still don’t get the need for honey, either.