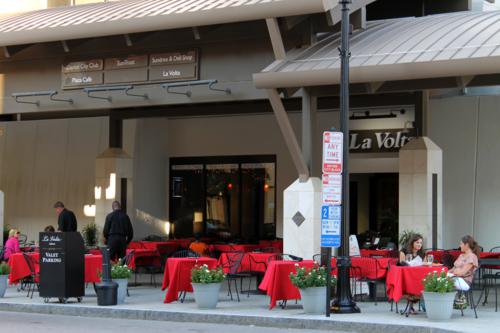 La Volta is an Italian restaurant on Fayetteville Street, right off the pretty City Plaza stretch of downtown Raleigh, which means it’s a prime location for people watching, especially if there’s a costume convention in town. There are plenty of outdoor tables, but I found the indoor seating sleek and inviting with red, black, and gold coloring and interesting modern art pieces. 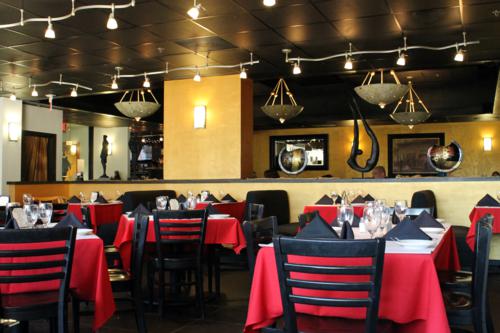 Also interesting was the singer making the rounds through the restaurant. I honestly thought they were playing a soft track of Italian restaurant standards—you know, Rat Pack music—until I saw the man’s lips barely moving over the mike. He had a nice voice and made plenty of guests feel awkward in that way that restaurant performers have of leaning in close to you for some gentle ribbing. I thought he was charming if perhaps too happy to be paid in wine.

But enough about the entertainment, you’re here for the food! The bread served was a unique focaccia that was baked to be very chewy and soft. I thought it was tasty; a friend thought it tasted more undercooked than enjoyable. We finished off the basket fast and moved on to appetizers. 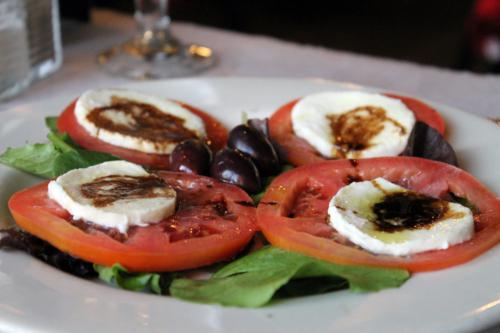 La Volta must get the sort of clientele that doesn’t actually know much about Italian because our waiter felt the need to warn my friend that that mozzarella caprese salad wasn’t like a normal salad. On how it tasted, she only commented that the balsamic used was very sweet. Caprese salads can be a lot prettier than that presentation, but it looked fresh.

Another friend had the melanzane rollatini, which is eggplant rolled up and stuffed with cheeses and ragout sauce. 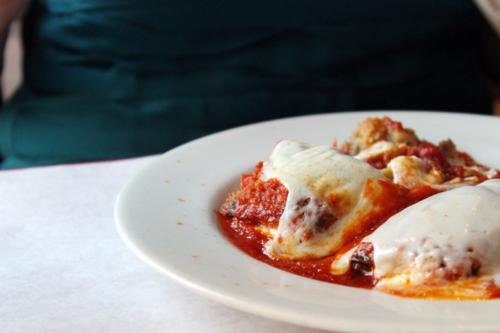 Now that’s a large appetizer! She enjoyed it. I decided to have a side of two-potato croquettes for my starting dish. 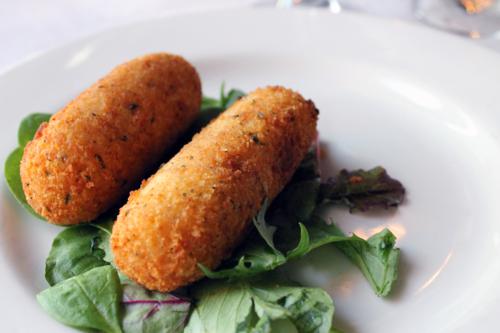 They were enjoyable, though I actually wanted more salt in the mix, which is rare for me. They were fried perfectly and the taste and texture of the potato filling was spot-on. Don’t waste time on that lettuce garnish, though—a bit wilted, and it actually made the side order look messier than it would have without them.

Our fourth had a Caesar salad, and she thought it was pretty good despite the dressing it was swimming it.

Moving on to the entrees! We were satisfied with our choices, but there wasn’t much that stood out. I thought the risotto alla pescatore looked quite scrumptious on the plate. 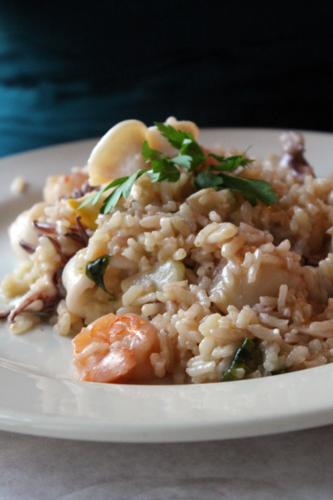 Friend #1 was overwhelmed by the amount of tentacles—she’s not a fan of calamari except in ring form—but she thought the rings were cooked well. 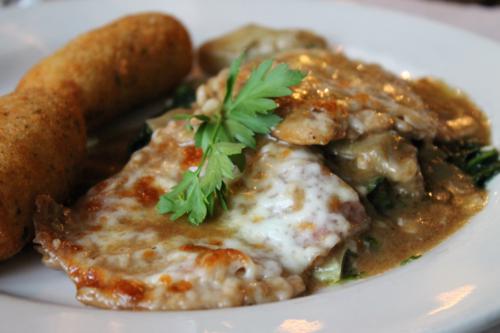 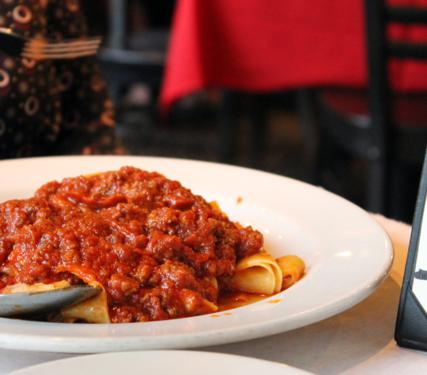 The veal picatta (top picture), which is breaded veal in a white wine sauce with capers, that came with a choice of sides (my friend opted for the croquettes) and the pappardelle with bolognese (bottom picture) were both deemed good. My friend was more enchanted with the croquettes than I, which was a difficult feat—seriously, two more shakes of salt and they’d have been perfect.

My choice was orrechiette dell-amore, orecchiette pasta with broccoli rabe and Italian sausage in a white wine and garlic sauce. 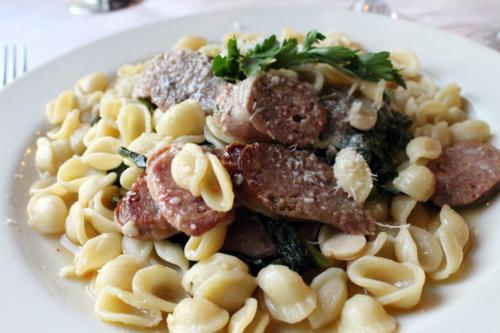 The sausage was wonderful, full of spices that came together to make that meat flavor pop. The rest of the dish was simple and tasty.

When our very slow waiter finally came around with a dessert tray of four options (Does anybody actually like dessert trays? I think they are negative sellers for me more often than not), nearly all the table opted for the limoncello cake. 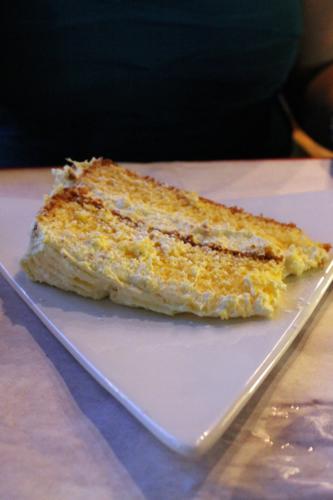 It was, by far, the best part of the meal, and I say that only having taken a bite. Delicious homemade cake with a great lemon flavor and wonderful buttercream frosting. It’s worth it to come just for the limoncello cake.

In fact, that’s what I’d recommend La Volta for—a slice of that cake and perhaps an entrée to go before it if you’re hungry and you enjoy standard Italian fare. The meals were all perfectly fine, but I’d probably choose Posta Tuscan Grille instead if I had a hankering for Italian downtown.