Carolina Crossroads is one of the many fantastic hotel-based restaurants in the area, including the Fearrington House Restaurant, the Fairview Dining Room, and Herons among others. I’ve been to a few disappointing meals recently, and it was great to have a meal out that exceeded my expectations. 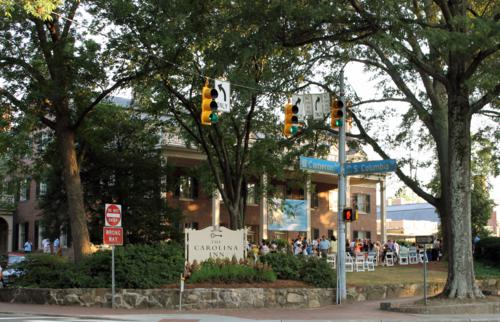 It’s located inside the Carolina Inn, one of the few hotels in downtown Chapel Hill. Walk inside, and you’ll soon come across the sign advertising the restaurant down one of the inn’s long halls. 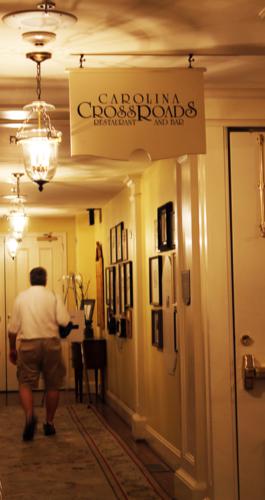 The atmosphere was surprisingly sunny, which was lovely. I do, however, think the decor could use some updating from the Carolina Blue plaid or patterned seat covers and simple yellow walls. 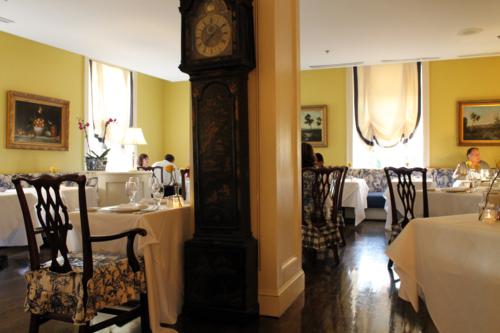 Yes, yes, I know, it’s a university institution! It’s supposed to be stuffy! I can’t help it if I’m more drawn to modern, urban décor and bold colors. It’s my thing, yo. That said, I didn’t find the service stuffy at all. The wait staff was impeccable, navigating the border between attentive and obtrusive service perfectly. 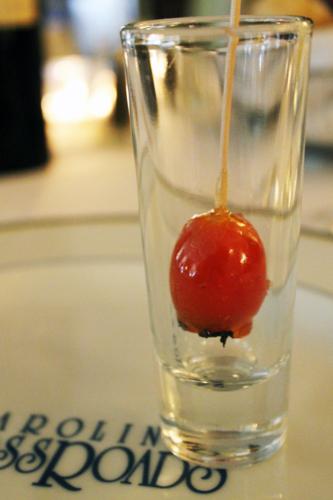 Dinner started with an imaginative amuse bouche of a candied grape tomato dipped in basil. My husband exclaimed over it, and it’s rare to get him to exclaim over anything. The hard texture of it, along with the sweetness from the sugar shell, enlivened the tomato’s flavor. The basil gave it that little push into a well-balanced treat. The bread basket was accompanied by butter that was sprinkled with just a teaspoon’s worth of Hawaiian volcanic salt. Let me tell you, restaurateurs, any small step you take to liven up your butter is a smart move. It shows great attention to detail, and that extra boost of slightly smoky flavor from the salt made me smile every time

We decided to split two appetizers and share an entree for this meal. I often find that appetizers impress me more than the main event, so I like to try as many of them as possible. The first choice was a duck confit panzanella with focaccia croutons, Hillsborough feta cheese, and spicy candied pistachios in a ver jus vinaigrette. 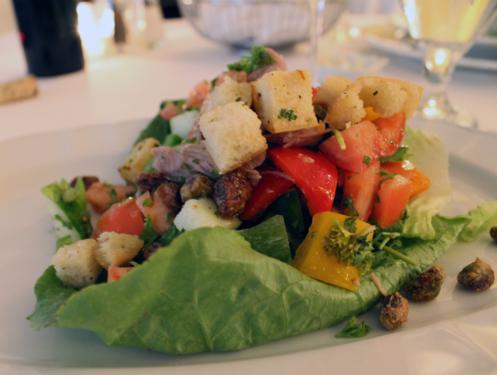 Beautiful colors. However, the dish itself was probably the least exciting of the meal. I have this image in my head of panzanella—and this may be a moment when my cuisine knowledge isn’t up to snuff—being a salad mainly of bread that has been soaking up the flavors of the other ingredients and the sauce for some time, and this salad definitely wasn’t that. It was heaviest on the bell peppers, which tasted great but there were more of them than expected. The croutons were tasty but not plentiful enough. I enjoyed the spice coating on the nuts, but I didn’t feel the feta contributed anything, and the duck confit portions were skimpy and not as good as others I’ve had in the area. It was still a fine dish; I had just been expecting something else.

The second appetizer was much more appealing to me. It was a huge lobster spring roll with cilantro peanut pesto, pickled vegetables, coconut curry crème fraîche, sesame cucumber salad, and sriracha lime vinaigrette. 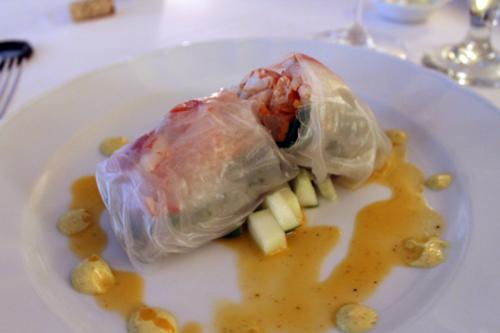 The lobster meat, mainly claw, twinkled on its own nicely. When paired with the coconut curry crème fraîche, it shined. As is often the case with spring rolls, my only complaint was that the contents of the roll were too dry; I think drizzling the sesame dressing inside the roll rather than around it would do wonders for this dish, though it would take away from the plating. A stronger flavor from the vinaigrette would be good, also—I’m not sure I tasted it at all. But that lobster was satisfying.

Carolina Crossroads proved to be a trend breaker for me in more ways than one. The second, besides a short string of disappointing meals at other establishments, was that I enjoyed the entree far more than the appetizers. Those were pretty good, but the entree blew me away, especially the lamb. 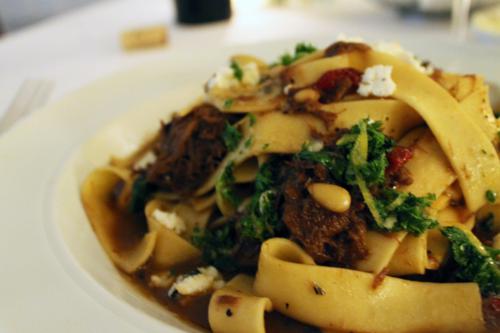 I write especially because I’m not typically a fan of lamb. But in this form, braised and pulled before being tossed with the pappardelle pasta, it was perfect. The sauce was only lamb jus, and it was fantastic, infusing that pasta with rich, earthy flavor that somehow improved when complemented by the spinach or black truffle-scented ricotta. The pine nuts were extraneous because the dish didn’t need anything else. I definitely recommend it.

We finished the meal with a dessert of a summer peach ice cream sandwich made with shortbread cookies and rolled, I think, in almonds. 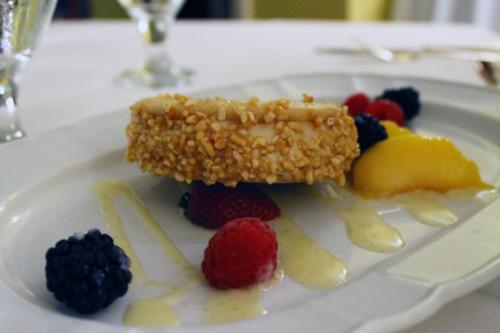 It was served with a few berries and peach slices and a drizzle of ginger ale crème anglaise. The fruit was delicious and the sandwich even more so. It was vividly peach, and there are so many different desserts that ice cream would go well with, including just slopped into a cone. The nuts added crunch, and using sugar cookies was the right choice of cookie combination with the ice cream.

I was quite pleased with Carolina Crossroads, especially with how simple both the pasta and the dessert seemed, yet they still impressed me a lot. The appetizers weren’t quite as exciting, but with a little tweaking of that lobster roll, I’m sure I’d be more than satisfied.