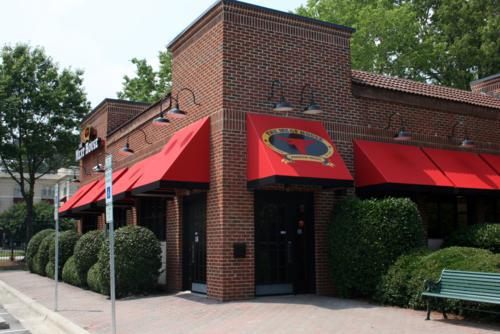 Donna Coon, who owns the recently opened Meat House in Chapel Hill with her husband, Paul, took me on a tour of the facility a couple of weeks ago. I was excited to try out this chain butchery because they’ve opened three shops in the Triangle now, and so far, feedback has been great! The Meat House takes pride in the quality of their offerings and in offering as many local items for customers as possible, though partnerships with local animal raisers are still in the works due to the difficulty in assuring that the farms are properly certified and have enough product to supply the butchery. Donna assured me that they are working on offering local meats, though. In the meantime, they have a range of meats that you can’t often find in your grocery store’s butchery, and high quality cuts of the meats that you can—the Meat House only sells the top two grades of USDA meats. Part of why I wanted to tour the Meat House was to see if I could find a few items there that usually elude me at the average grocery store: duck breasts, rabbit, mullet, and flank stank. By the end of the tour, I’d find three of the four—not bad! 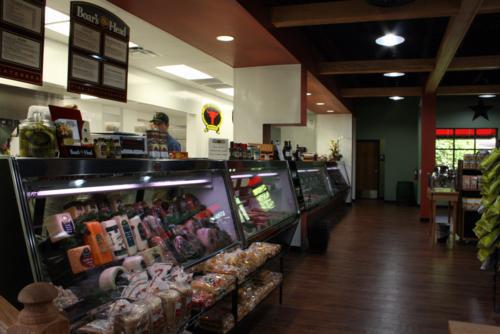 Behind that display case are plenty of super friendly butchers ready to help you with whatever you need—seriously, they were very eager to please, and honestly, that earnestness boosted my mood. Now vegetarians, consider this your warning to turn away—we are taking a tour of the Meat House’s offerings, starting with their aged steaks that looked amazing, and I’m not even that big of a meat eater. 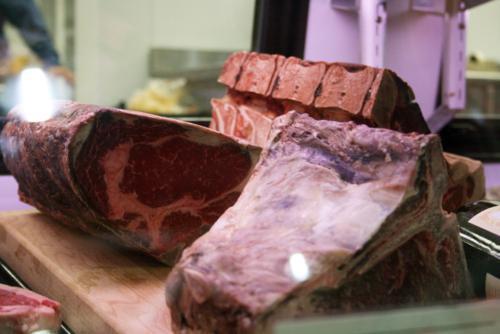 Prices in general were comparable to what you’d pay elsewhere for the quality of meat, by which I mean they don’t sell cheap cuts, but what they do sell is by no means overpriced. I’m not doing comparisons or anything (just an unpaid blogger, ya’ll!), but I’d feel perfectly happy spending what they ask for their meat. 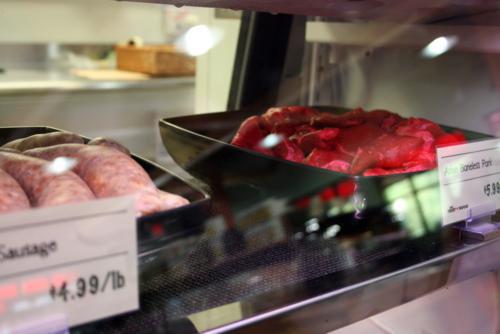 This is house made chorizo ($4.99/lb.), created by one of the Meat House’s enthusiastic butchers when a customer asked if it could be done. They are very willing to experiment and try to meet the needs of their customers. Looking for something unusual? Ask the employees and chances are they can order it for you at the very least. In this display, I was also impressed by the offering of Asian-style boneless pork complete with a red tint ($5.99/lb.). 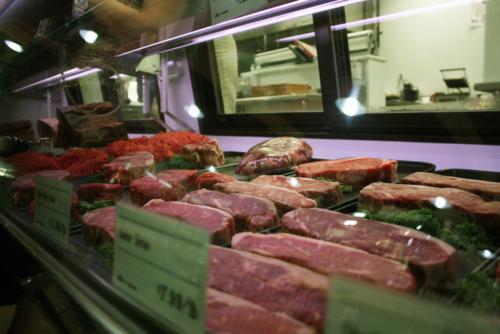 More steaks and nice ground beef in the background. 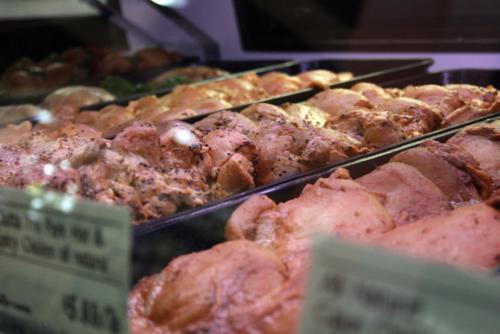 They have a range of meats marinating in the display case. This is chicken in the Meat House’s proprietary sauce (light mustard and Italian flavors), and they also offer cajun blends, maple bourbon, burgundy, and other sauces. At between $5 and $6 a pound, I thought these were an excellent deal. The same marinades are also available for steak tips at around $9.99/lb. 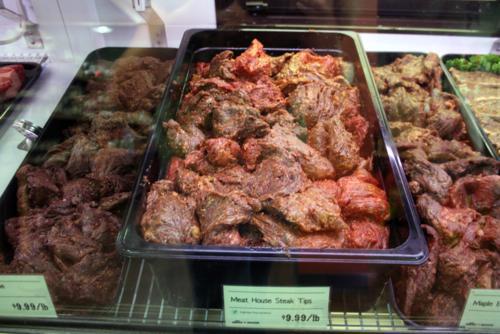 Should you not enjoy ordering your meat from the display case, which would be a shame in a shop with this many friendly people ready to help you, you can head straight to the back of the store and pick up many of the same meats in prepackaged bags. 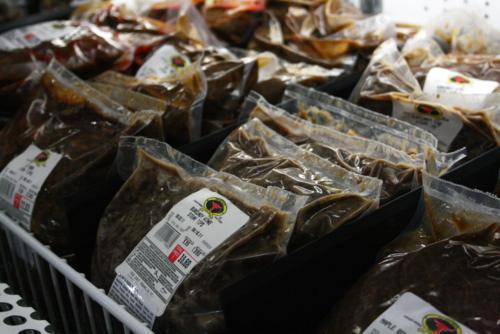 In addition, there are prepackaged, marinated veggies, 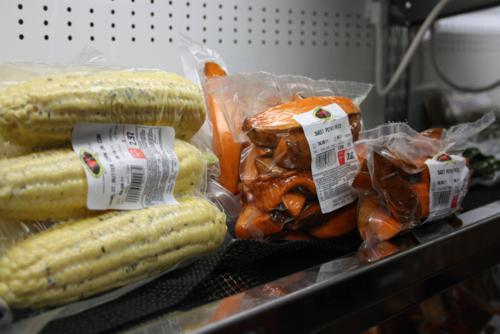 and prepacked sides from Sanford’s Chef Hamm like macaroni and cheese and sweet potato casseroles.

As for my quest, the Meat House’s flank steak looked wonderful, though I didn’t get a picture. I never found mullet, but Donna told me that seafood is not a focus of the Meat House. They offer some, but it’s kept in the frozen case only and is a limited selection. Duck breasts were definitely available in the freezer case among other harder to find meats like crocodile and ostrich. I can’t wait to finally make my own duck with raspberry sauce! 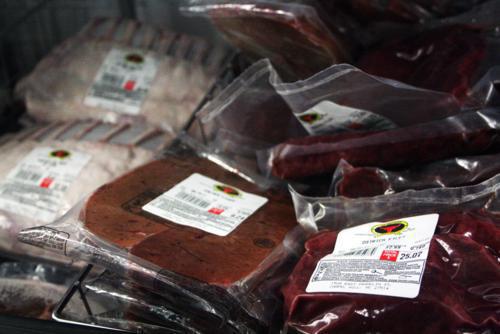 Ostrich on the right and racks of lamb on the left. I think the middle meat was lamb tenderloin, but I can’t vouch for that. 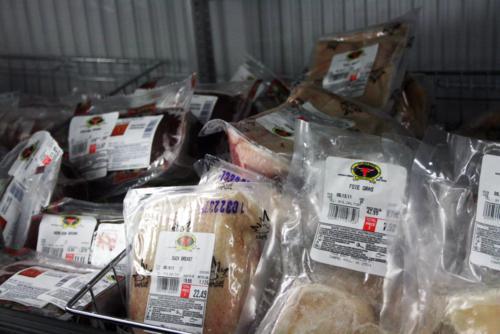 Duck breasts in the middle, foie gras on the right. They also had whole rabbits (Item #4!) and kobe and wagyu ground beef in the exotic meat section.

Now, those meats are impressive, but the Meat House doesn’t only sell meat—Donna told me that they aim to be a one-stop shop in the sense that you can put together a nice meal all in one trip. That includes a limited produce selection, lots of cheeses, some of which are locally produced, 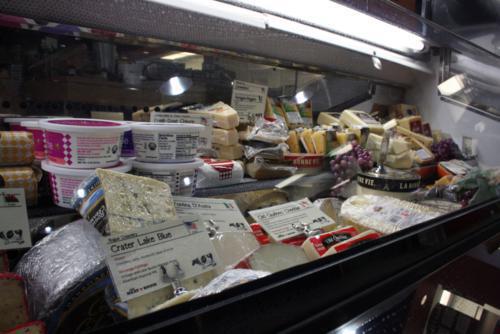 and vegetables marinated and ready to throw on the grill, both in the display case and prepackaged. For the lushes among us, they also sell a range of craft beers and are working on offering more local ones. 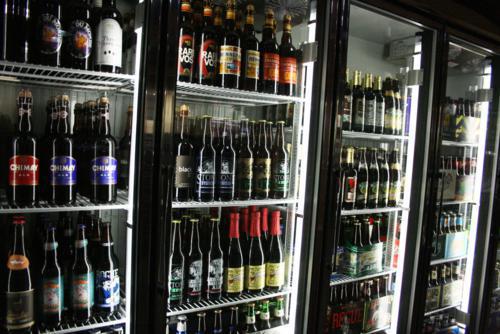 There are plenty of spices, too, with great prices. 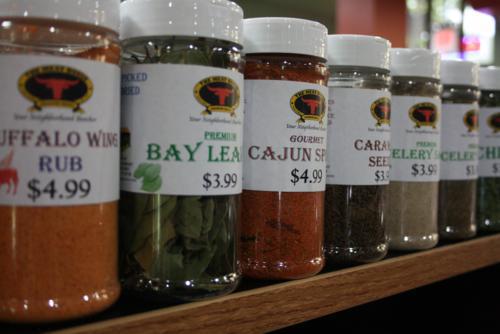 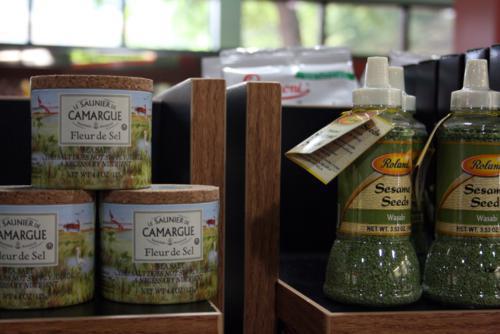 They also have a small wine selection, including Bonny Doon vineyards, which yet again made me sick for my hometown of Santa Cruz. Seriously, who wants to fly me out for a week? Pretty please? 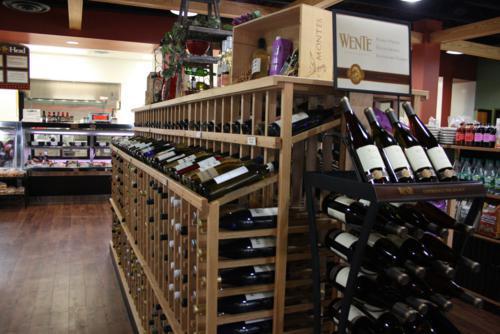 As you might imagine, the Meat House has a section devoted to marinades, and right behind it are imported olive oils that tasted mighty fine. Donna especially talked up the savory cheesecakes from Pine Valley Market in Wilmington among the other gourmet items available to complement your meal.

Donna and crew sent me home with a sample of their steak tips marinated in the Meat House marinade. 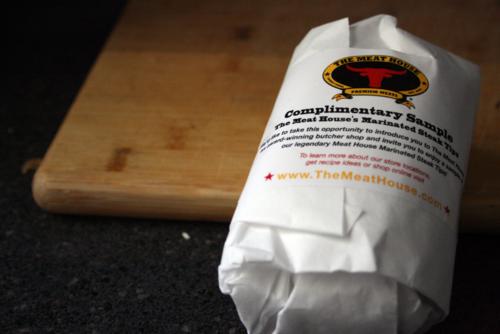 I sautéed them, getting a nice sear. 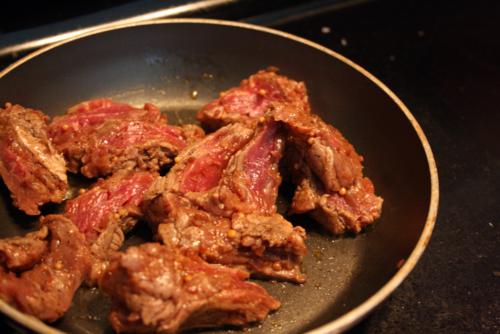 They were super good, folks, and I swear I’m really not that big of a meat person. The beef tasted fantastic, and the marinade flavor was really tasty. I’d easily pick it up again when in the neighborhood and in need of a quick meal.

All in all, I was impressed with the customer service offered at the Meat House and the selection of both exotic meats and already made marinades. It’s definitely worth a stop to check out and see if they have something you’ve always been looking for elsewhere. The store is a bit hidden at the corner of East Franklin and Estes, but pull into one of the driveways nearest the intersection, and you’ll find it.