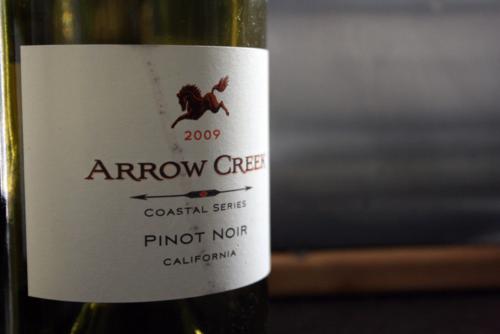 It’s on the browner side of red for a wine, mudlike in color. I smell rhubarb, plum, and tobacco, and the plum sticks with me when sipping. It or some other stonefruit is prominent. There are a lot of tannins, and the wine tastes dark with coffee and tobacco notes. It reminds me of beef jerky with cinnamon and allspice thrown in for extra flavor.

The Arrow Creek 2009 Pinot Noir is a fleeting wine that makes an interesting glass. It’s not the perfect combination of notes, but it’s worth trying.

This was surprisingly good.  I daresay, it was one of the best wines I’ve had for under $7 . . . This is a great wine for the price.  Wine enthusiasts may swirl their wine glass at me snootily, but it’s true.  It’s a darn fine cheap wine.