18 Seaboard is located in Seaboard Station, a renovated train station that I never knew existed before heading out there this particular evening. It’s a contemporary American grill, which means that the focus is on grilled meats with plenty of attention to décor and intriguing menu combinations. The restaurant is very large. The inside reminded me a lot of bu*ku with its rich, modern blues and golds, draped fabrics, and impressive lamps located all the way at the top of the two-story vaulted ceilings. We didn’t spend much time in the dining room, however, choosing instead to try out their upstairs patio. 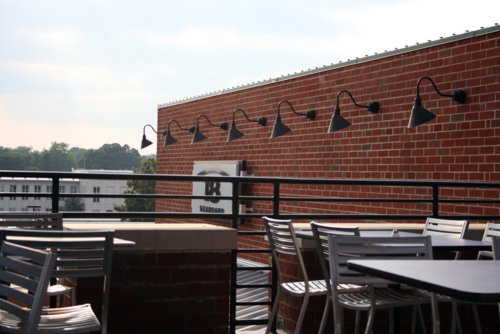 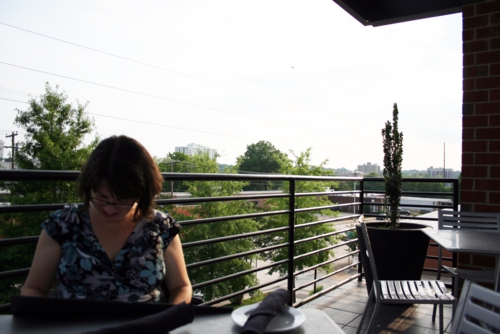 Can’t complain of the view, and the weather was perfect that evening, though the tables are a little small for all the plates and glasses. At Farm to Fork last year, I had the pleasure of sampling 18 Seaboard’s strawberry, pear, and vanilla bean sangria—it was just as delicious this time as that sample had been. 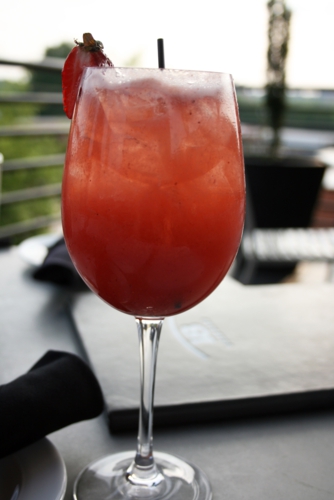 Not only is it beautiful, but combining the grainy texture and mellow flavor of pear with sweet  strawberry and plenty of fresh vanilla makes for a delightful libation. I highly recommend it.

The bread served before dinner was rosemary focaccia. Its crust had the perfect crunch for me, but I found the strong olive oil presence a distraction. After bread came the best part of my meal: the grilled asparagus chopped salad. 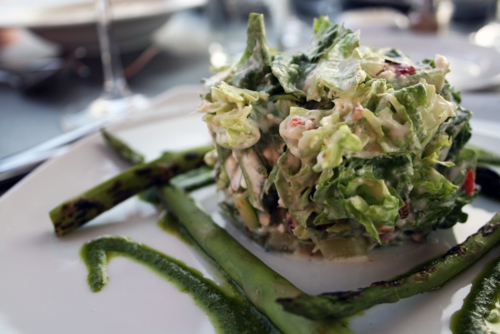 A chopped salad with grilled asparagus would be a better name for the dish, but with a presentation that lovely, I didn’t mind that the asparagus wasn’t cut up as expected. Other than a bit too much dressing—which was a green peppercorn and blue cheese combination that worked very, very well together—the salad was wonderful. The small, extra crispy bacon chunks added a needed crunch. I could have had a slightly larger portion for my entrée and been quite content. Instead, I opted to try the hardwood-fired menu as it made sense to give the restaurant’s main focus a try. A small selection of chef’s specialty entrees, pastas, and large salads are also available. For the hardwood grilled option, you can choose from a number of beef and seafood options served up with a specialty sauce of your choosing and any two side dishes.  I went for the salmon with bourbon molasses butter sauce, goat cheese mashed red potatoes, and grilled zuchinni and summer squash. 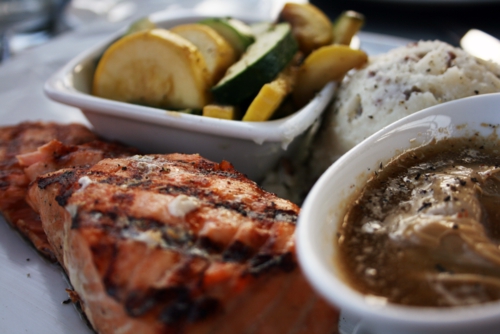 I loved the salmon. It was seasoned just right for me, and frankly, I didn’t need the bourbon molasses butter sauce in that little ramekin at all. The fish was great on its own. The sauce was good, too, but mixing it up would make it more appealing to me. I mainly used it to give the squashes extra flavor—they were pretty boring. The goat cheese mashed red potatoes were rich, as you’d expect with goat cheese mixed in, and pretty darn good. The plate was tasty and satisfying, but I can’t say anything wowed me on it.

My friends felt the same way about their choices, though the two of them who also chose the molasses bourbon butter were much more enthusiastic about it than I was. They didn’t care for the barbecue sauce that came with the brisket however, happily scraping it off to use the butter instead. All around, the vegetable sides were found to be lacking, but the cheddar grits ground at the Old Mill of Guilford were awesome.

We moved onward to dessert, with two friends opting for the banana pudding cake with strawberry ice cream. 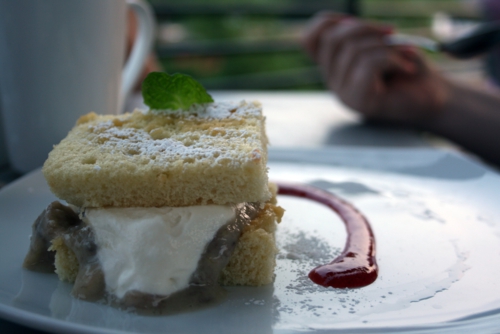 It looked pretty fun to eat. The strawberry ice cream garnered raves, but the pudding cake was not as well received. The banana flavor was good though it was an odd choice to use bananas that were browned. Since I think it’s wasteful to toss a banana just because it’s been exposed to air, I can’t complain about that, really. My friends though the cake portion of the dish was too dry, however. One friend definitely enjoyed her key lime pie with ginger cookies. I opted for the flourless chocolate cake with peanut butter mousse and vanilla ice cream. 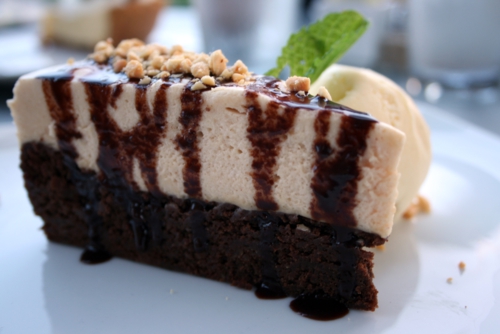 I expected a thin layer of mousse so I was excited when it was much thicker than I thought it would be. The ice cream was more on the icy than creamy side, which isn’t my favorite texture.  The cake was great if not that original.

18 Seaboard turns out good, satisfying food. If the hardwood grill and dessert options were as inventive as the appetizers and drinks, I would have very impressed. As it was, 18 Seaboard fell a little short for me—I’d likely stick with the chef’s specialties if I went again as they seemed more thoughtfully created.

I grant them a slightly overipened