For this month’s Social Media Supper Club, we settled on Lucky 32 Southern Kitchen, in large part because I’d enjoyed their appetizers at the Tri Foodie Tweetup last fall and had a hankering to try some more. We were very happy to be joined by first timers Valentina (@ValenGarcia43), Chelsea (@chelsea_alyssa), and Morgan (@morgansiem) in addition to our stalwart regulars including Rocio (@apiciusapprenti), Brian (@BCwritr), Mandy (@demandycom), and me (@thegourmez). 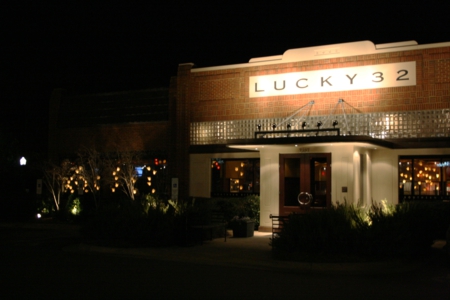 First off, Lucky 32 is a huge space with an outdoor patio, large bar, and two spacious dining rooms that still manages to feel cozy and modern. 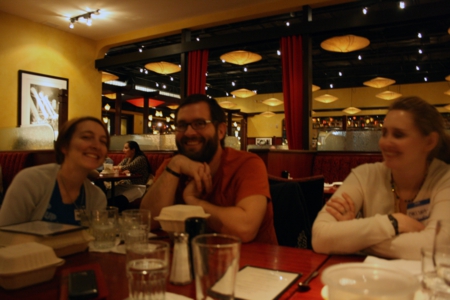 Mandy, Brian, and Chelsea unknowingly showing off the decor behind them.

We all loved the cherry wood tables, red-and-brown-patterned chairs, and beige walls. Add in fun, floral- and saucer-shaped lamps, and you have a stellar atmosphere. Also stellar was the variety of appetizers that Lucky 32 gave us with their compliments! I didn’t take pictures of them this time, but if you want to see them, check out the earlier tweetup link.
The voodoo pig bread was definitely the winner with its sweet and spicy glaze, goat cheese, red onion, and cilantro on soft ciabatta flatbread. The jazz fest shrimp bread with a rich cheese sauce and green onions was Valentina’s favorite—a party in her mouth was the quote. Votes also went out for the sweet potato hushpuppies with country gravy. I was impressed with the fried green tomatoes, as I’ve rarely enjoyed them when I’ve tried the Southern classic, but these came with a great blue cheese sauce, small bits of bacon, and more of Lucky 32’s fab voodoo sauce—yes, they bottle it, and I really ought to have brought one home. The tomatoes were too firm in the opinion of some clubbers, but I like the texture. The Whistle Bite Sliders’ pork belly was extra fatty this time so not as amazing as during the foodie tweetup, but if you are a pork belly fan, they aren’t to be missed.

Lucky 32 has a great drink list that prominently features some classic cocktails such as the old-fashioned and the sazerac. 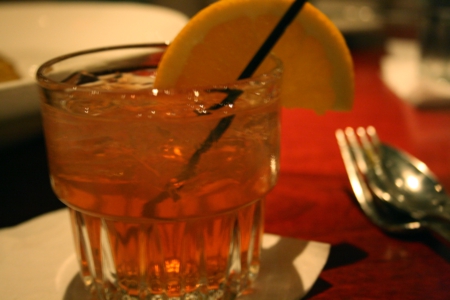 Made with Jim Beam rye whiskey, absinthe, and bitters on the rock, the sazerac was delicious. They also have some more inventive cocktail takes like the Sweet Teani with Firefly, triple sec, and limoncello. I’m trying that one next time as I’m on the hunt for a good Firefly mixed drink. The draft beer heavily featured local breweries with bottled brews from near to far. There’s an impressive wine list also.

Moving on to the main event, make sure you check out the middle column of Lucky 32’s menu (thanks for the tip, Masala Wala) as that’s where their seasonal specials take up residence, presently called the Mid-Winter Carnival. We ordered about half off that menu and half off the regular menu. Points were given for the fun naming of various dishes. 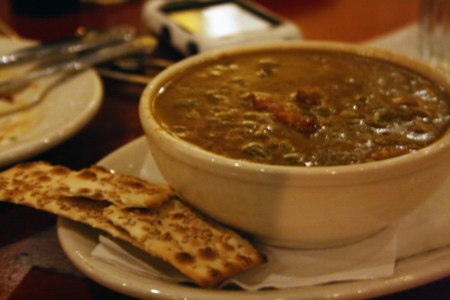 Valentina thought the Big Easy gumbo needed some more spice or garlic, but she thought the sausage in it was great. 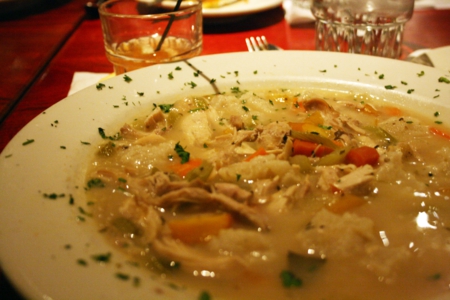 I was pretty content with my chicken and dumplings, though I prefer my dumplings larger and fluffier. The pulled chicken was delicious, and I enjoyed the moderately thick soup that tasted of perhaps tarragon or marjoram. If the carrots and celery had been cooked less, I’d have really, really liked it. 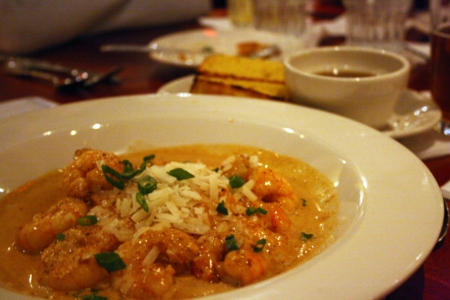 Rocio and Chelsea both opted for the New Orleans BBQ Shrimp. It came in a creamy barbecue sauce that tasted very similar to the delicious Jazz Fest Shrimp Bread sauce with perhaps more kick. Rocio proclaimed the whipped sweet potatoes wonderful and a great complement to the shrimp. The dish came with one side option and she chose the cornbread with pot liquor for dipping. The cornbread was fab, but the pot liquor was not that exciting for her. Brian agreed with that assessment as he also had the same for one of his sides. 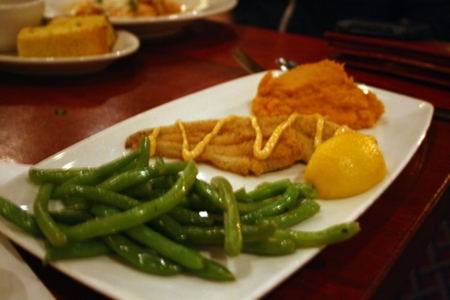 Mandy’s cornmeal-crusted Carolina catfish was tasty fish, but crisper frying and breading would have been appreciated. She enjoyed the Creole mayonnaise on top and thought the green beans were good. The sweet potatoes were again praised, but she, and Brian who also had it for his second side, was not impressed with the macaroni and cheese. Both prefer more cheesy and rich versions of that feel-good classic. 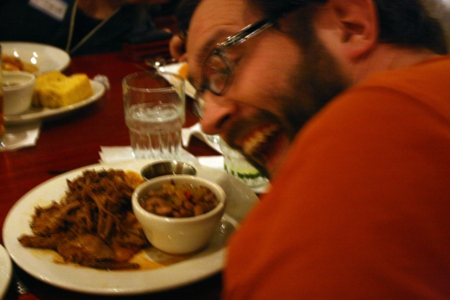 Brian had the pulled pork on johnny cakes. The pork was in that divine voodoo glaze, which Brian was fast to praise but wants to make sure you all know it’s not traditional NC barbecue—perhaps he’s already experienced the fervor of the NC barbecue acolytes. He found the meat delicious and was very fond of his pinto and chow chow side. 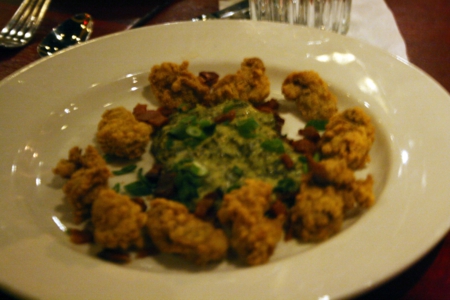 Morgan had the flash-fried oysters with creamed spinach and Benton bacon. It was a dish that surprised her, and she especially enjoyed the way the salty bacon combined with the rest of the elements.

Onward we moved to dessert! Perhaps nowhere else does the inventive nature of Lucky 32’s chef, Jay Pierce, and the Southern Kitchen come into play: standards like banana pudding become white chocolate and banana bread pudding, though some stick closer to tradition like chocolate chess pie. 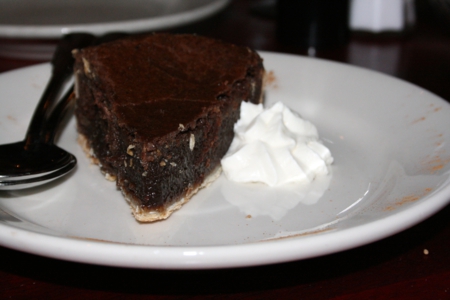 Valentina and Morgan shared this gem, and they managed to make it two-thirds of the way through the dense treat. Rocio opted for the Homeland Creamery ice cream flavor of the moment: black cherry. 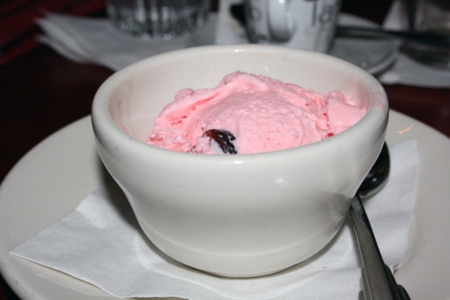 Looked tasty and she had no complaints. She did complain about the espresso, though, as it was too cold too fast and a roast she didn’t like. It’s worth noting that Brian was content with his cappuccino, not sensing any of the same problems—different strokes, different folks.

I went for the more experimental option on the list (I can’t help myself), Mamaw Millie’s Scuppernong Wine Jelly Cocktail. 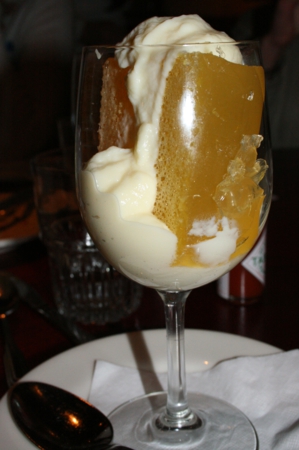 That’s a thick and surprisingly concentrated slab of scuppernong jello! I dug it, especially because it tasted much drier than scuppernong wine normally is—North Carolinian sweet wine preferences are a Southern taste I definitely haven’t picked up. The accompanying custard sauce was good but not what I’d choose to combine with the jelly—neither was very sweet. If paired with a sweeter sauce, perhaps a crème anglaise and maybe a florentine cookie, it’d be perfect for me. 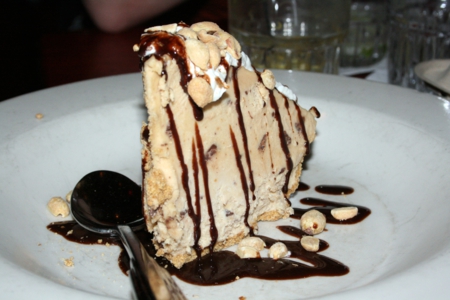 She would have preferred a fluffier pie with more chocolate but was pretty happy nonetheless. I definitely agree that more chocolate was called for, but I thought it great otherwise and the roasted peanuts were a nice touch. It was certainly a plentiful portion!

So what did we think? 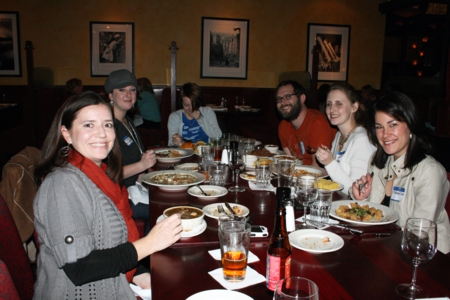 The discerning judges of the evening.

We were pretty evenly torn between 3 and 4 stars, with the lower, yet still satisfied, scores due to a couple of service errors, a few dishes that could use more refinement, and a general feeling that the entrees would be more appealing if priced a couple of dollars lower. However, I’m writing this, so I get the last vote and I opt for 4! My choices were pretty great, I think those appetizers are outstanding, and I’d be happy to return and try more. Definitely order anything with sweet potatoes or voodoo sauce!

One thought on : Lucky 32 Southern Kitchen