The Fairview Restaurant is tucked deep within the bowels of the Washington Duke Inn—seriously, you need to ask directions to find it in the maze of the fancy Duke hotel and golf course. Once there, though, I had to admire the decor. 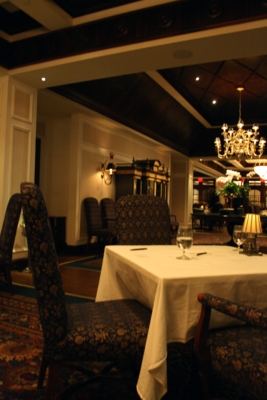 I personally believe that at least half of all universities have blue and gold for their colors (note: Oops! Turns out Duke only has one color: blue. White could be considered their second color, not gold, but blue is the only official color). Turns out it looks pretty nice in chair and china design. 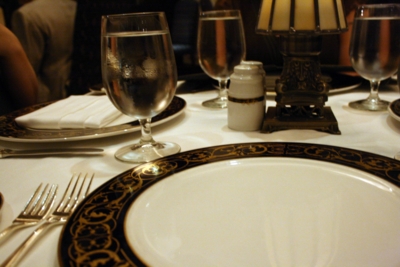 As you may or may not know, the Fairview is definitely on the list of the highest-rated, white-tablecloth restaurants in the area. After this meal, I think it quite deserves that ranking. The room is a bit stuffier than I like, with wait staff a little too close on hand most of the time, but of course, very polite and competent. That’s just my personal preference, however.

As is often the case at fine-dining restaurants, we were offered an amuse bouche to whet our appetites. 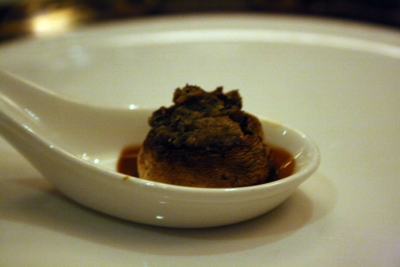 It was a stuffed mushroom with balsamic vinegar. As most of you know, at least from my rating system, I do not enjoy mushrooms, and yes, I’ve tried them many times in different ways. Sometimes they are passable for me, but it’s rare. This time, I’d have to say it was delicious, but I couldn’t imagine eating more than that one small cap.  Regardless, any time I enjoy a mushroom is a good sign for the meal to come!

Bread offerings included cheddar biscuits and regular white rolls, with or without rosemary. Both were good, but the cheddar biscuit was definitely the better of the pair. My companions who ordered cocktails loved them, so when I head back sometime, I’m definitely having one. For my appetizer, I had the day’s special, a roasted piquillo pepper soup with basil. 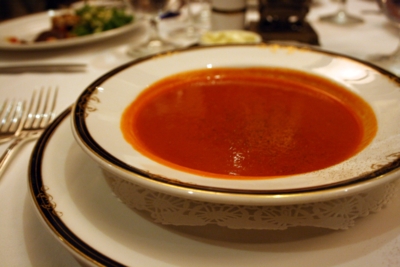 It was the least exciting of my dishes, mainly because it just tasted like tomato soup with a bit more warmth to it. The basil didn’t come out at all, but the roasted flavor gave it a great taste. One of my companions loved her roasted butternut squash bisque with sage, browned butter, and maple crème fraiche—I would definitely have ordered that if I hadn’t had my fill of butternut soups already this fall. She thought it was an unusual take on that with the browned butter making it more savory than the often sweet varieties. The warm Celebrity Dairy goat cheese salad was not as big of a success, however. 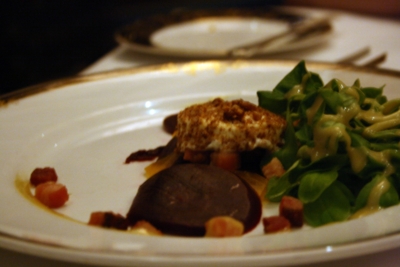 Per my friend, the goat cheese wasn’t served warm as advertised, nor did it really seem like a salad, more like a little pile of mache with the spiced pecans, goat cheese, beets, and bacon in small portions around it. She thought maybe a more bitter green would have tied the disparate parts together better, but as it was, the bacon overpowered everything else. Good ingredients, not so good together.

For my entree, I had the absolutely divine poached Maine lobster in a mirepoix of roasted veggies, served up along with lobster and potato raviolis that were topped with leek fondue. 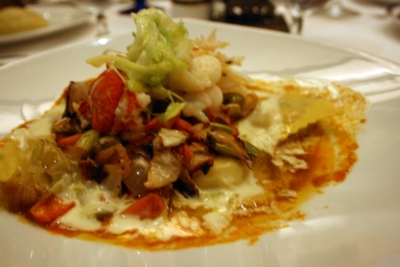 That probably sounds like a lot for any one dish to contain, but it did so effortlessly. My friend who also ordered it was every bit as happy as I was. The mirepoix was slightly sweet and the carrots, onions, and celery were roasted to perfection. The flavor of the leek was everywhere, not just confined to the small piles of cheese sauce (the fondue) on top of the ravioli, which had a great combo of flavors and texture. I love leek, and the cheese sauce enriched the mirepoix as they mixed together. Oh, the lobster tail, you ask? It was delicious, too.

For my two other friends’ meals, they had tasty dishes, but not ones that really played outside any bounds. One was either a prime rib or filet mignon dish with whipped potatoes, cabernet sauce, root veggies, and stilton fondue. The other was just an order of Caesar salad, which was nicely done, and a side of pumpkin Manchego grits, which the restaurant was nice enough to provide for her when she spied it as part of another dish and just had to try it. Good thing she did; it was great!

Dessert was next, and I went for a fig and almond strudel served with a port sauce and goat cheese ice cream. I also ordered a cappuccino. 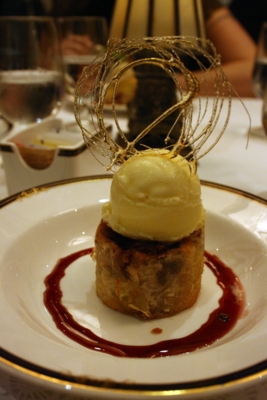 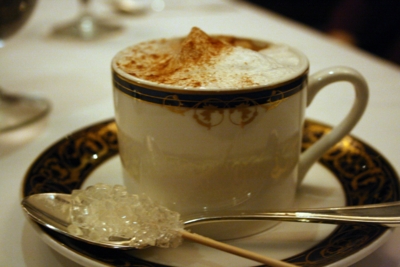 Yes, I was ridiculously excited to have a piece of rock candy served with my coffee! I realize it’s just a fun way to serve sugar along with a stir stick, but I didn’t let that stop me from just chomping on it. Rock candy is awesome, because somehow, it makes straight sugar seem not so bad to eat.

The dessert was fantastic. There were healthy-sized chunks of figs, making me appreciate that delicious fruit with each bite. The port sauce added needed sweetness to cut through the thick pastry. The grainy ice cream lent a fun texture to the dish.

Other dessert options we tried were brioche bread pudding with maple ice cream (the thick, dense type of bread pudding (not my nor my companions’ favorite style, plus they thought the ice cream too overwhelming) and an ice cream sampler of sweet potato, coconut, and marshmallow flavors. Both the marshmallow and coconut are highly recommended. Candied bacon was also an option, if you’re so inclined.

The Washington Duke Inn offers more affordable fair ($10–20) in their Bull Durham Bar, which is still a nice option, and honestly, I might have liked the atmosphere a bit more. They’ve got gourmet takes on standard pub fare and some of the Fairview Dining Room’s options as well. For me, other than a somewhat lackluster appetizer, I was in heaven with my choices. I’d definitely go back—especially if you want to pay for me, faithful reader. ,)