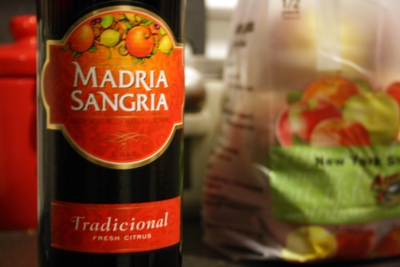 This is a premixed sangria, which I’m wary to try. I’ve had sangria in a bottle once before, and though the name of the brand eludes me, it definitely wasn’t worth buying again. This time, though, I’m hoping for better results.

It ‘s made with no grape varietal known to man—okay, at least none known to me.  The wine looks and tastes thin. It’s cherry red. The nose is of crisp citrus and spice. Mellow is the first thought that comes to mind on drinking it, followed up by some confusion as to the carbonation-like feel of the first few sips. That fades away, eventually, to a tip of tongue tingle, which I suppose I can try hard to think of as a nod to the sangrias often made with a dash of club soda to finish them off (not my preference). It’s sweeter than I like my sangria but not overwhelmingly so, and it’s much, much better than the last one I tried.

If you don’t drink it for the quality of wine but think of it as a pretty good punch in a pinch, then go for it.

Confessions of a Foodie

On promo at $6.99, I thought no way is this going to be any good, but my curiosity got the better of me, and I took it home. I finally opened it two days ago and last night, finished off the glassful.

As good as my sangria? No. A good stand-in? Oh yeah, baby!

Roxy.Cape Presents: Wine on a Dime

. . . Madria Sangria is actually quite tasty. To enjoy bottled sangria, you kind of have to forget the fact that it isn’t freshly made. Appreciate it for what it is. Madria’s is refreshingly crisp: good fruity flavor with undertones of red wine—which is exactly what you want. . . .This one does a nice job of maintaining the structure a good sangria should have.

Madria Sangria is a red wine with heavy citrus flavors and a smidge of spice. It’s delicious over ice, enjoyed on the patio with a barbecue dinner and the sun setting on the mountains.