The Manly Man Co. (website) is a purveyor of gender stereotypes and beef jerky—beef jerky in the form of laser-engraved meat “cards” and meat bouquets, that is. 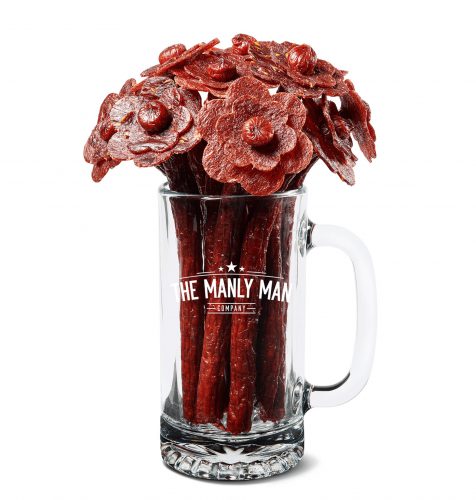 I took one look at that beautiful creation of beef jerky splendor and said yes, I would happily review a gift box from the company. Obligatory disclaimer: That means the jerky I am about to review was entirely free to me.

I can hear some of you now. “Wow, the Gourmez, way to perpetuate gender stereotypes.” “That’s so progressive of you, buying into men = meat products marketing.” Look, friends. This is not my first time reviewing a gift box advertised for men. And my opinion remains the same now as it did then—there are some men who truly enjoy the warm embrace of stereotypical manhood, and some women who think it’s hilarious to receive a gift meant for that sort of man. I don’t see anything wrong with buying gifts geared toward such people. And c’mon, they offered me a MEAT BOUQUET. 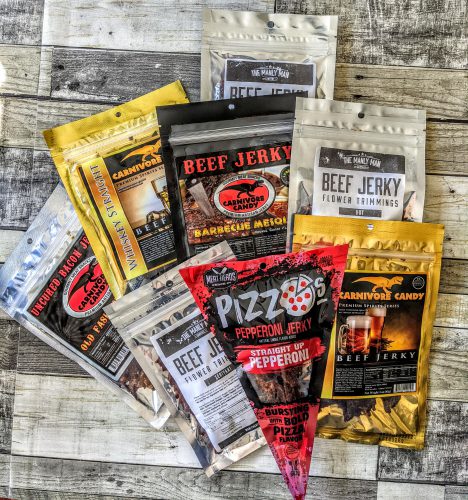 Here’s what I got.

Tragically, as you can see, that is not a meat bouquet but a pile of beef jerky, which arrived expertly stuffed in a box. A mix-up in communications ended up in my being delivered the Best Jerky Gift Box ($65) instead. For a time, I mourned my lack of meat bouquet, then sucked it up and did my food blogger duty.

Here is my review of the Manly Man Co.’s many varieties of beef jerky. May it help you in your own meat-tastic gift-buying decisions. 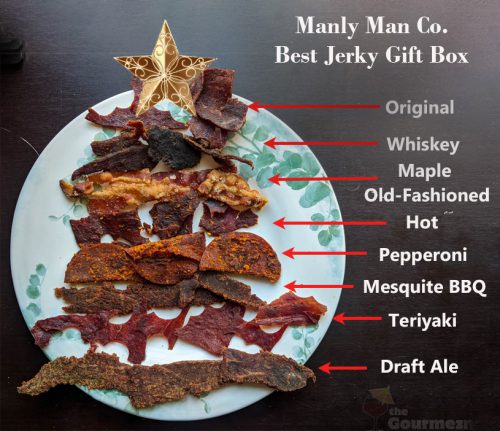 Yes, I made a beef jerky Christmas tree. Let’s start at the top and work our way down. The Manly Man Co. has a few brands of jerky, which I found provided quite a nice bit of variety. Their Flower Trimmings line is the type of jerky that’s been heavily processed, pressed into sheets, and comes out with a brick red tinge. They’re typically cut into strips for easier, juicier chewing, though the Flower Trimmings Line is more like a collection of scraps. 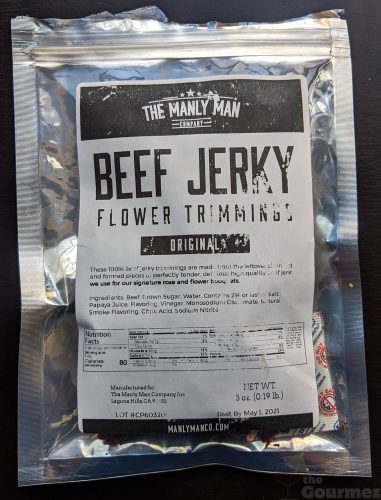 You don’t want to know how long it took me to realize that the oddly shaped Flower Trimmings’ jerkies is due to them being the literal trimmings of the “flower petals” used for the meat bouquets. Too long. And I must applaud the Manly Man Co.’s resourcefulness in marketing them as Flower Trimmings—it’s the sort of sly move that entertains me.

Despite the texture and moisture of jerky sheets not being ones I normally like—my favorite jerky is dry, takes some teeth-tearing, and comes in irregular strips—I was impressed by the Flower Trimmings Original’s solid flavor, good moisture balance, and liquid smoke restraint. Papaya juice is used for added sweetness and moisture, which I never would have guessed but explains what makes this jerky a cut above others of its type.

Next up is the Premium Spirits Series: Whiskey Straight Carnivore Candy. 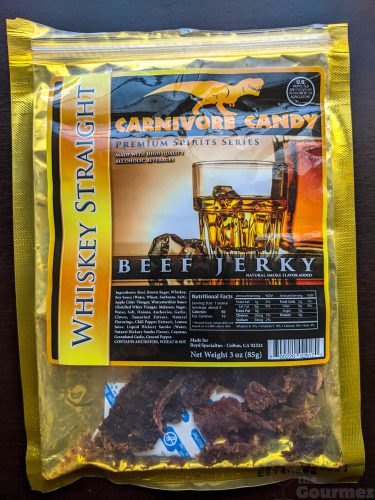 This line consists of several alcohol-inspired offerings, including tequila and rum, which I did not sample. Of note, I tasted this jerky while drinking a manhattan, so that may have influenced my impression. It’s surprisingly sweet with floral notes and ends with a little kick of heat. I’d categorize the flavor as more bourbon than straight whiskey, or like a pre-mixed whiskey cocktail, such as Rock & Rye’s Slow and Low. The jerky mimics an old-fashioned dehydrator style for the Spirits Series, which is the style that I like. You’ve got to tear it with your teeth for the full experience.

Next is the Carnivore Candy Old-Fashioned Maple Bacon Jerky. 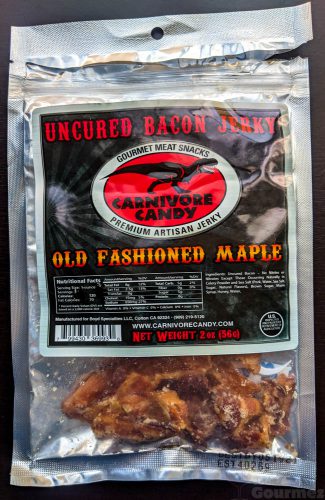 This is truly bacon jerky, appearing exactly like a strip of bacon coated with crystallized sugar dust. The amount of fat looks flabby, but it doesn’t taste that way: just sweet, rich, and delightful. I’d eat it again, and there’s a lot of candied bacon that I can’t say the same of. But it is pretty darn rich.

Back to the Flower Trimmings Line, but this time, we’re going Hot. 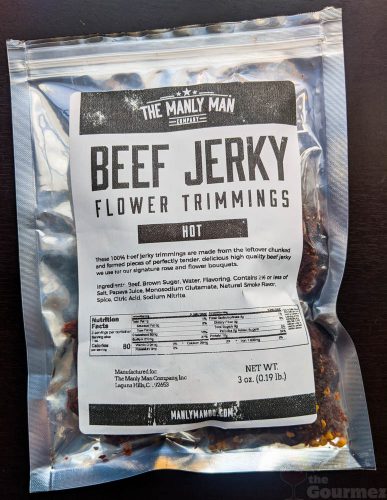 Visible chili pepper seeds dried into a hot jerky is always a good sign. Great flavor comes from that papaya-juiced basic recipe, as its sweetness makes the building heat more enjoyable. The more you eat, the hotter it gets, which is appealing. Somehow though, peppers aren’t in the ingredient list? I think that’s an oversight, being as I can see the seeds.

Next is Pizzo’s Pepperoni Jerky, one of a few pizza-inspired flavors that Manly Man Co. offers along with Supreme, Meat-Lovers, and Aloha. 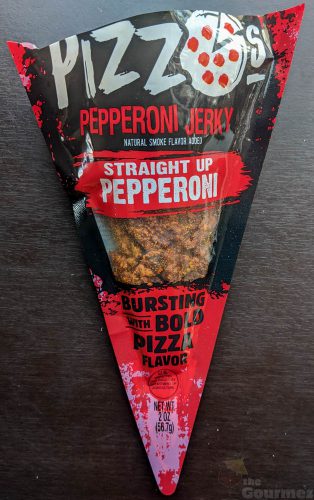 I must note that I tried this jerky too soon after taste-testing Pringles’ “Wendy’s ‘The Baconator’” Special Edition flavor, and lord, I did not want more tomato-flavored snacks afterward, so my opinion was likely (definitely) influenced by that. This jerky has all the flavors of your classic corner pizza shop slice with bright, saucy sweet tomato and plenty of oregano, basil, and parmesan baked right on with a crushed red pepper kick. But that’s also my problem—it has all those flavors, and that’s too much for one crispy slice of pepperoni to take. And honestly, the slices came across as damp – I think there was too much going on between the flavorings and my “Baconator” memories for it to score well. 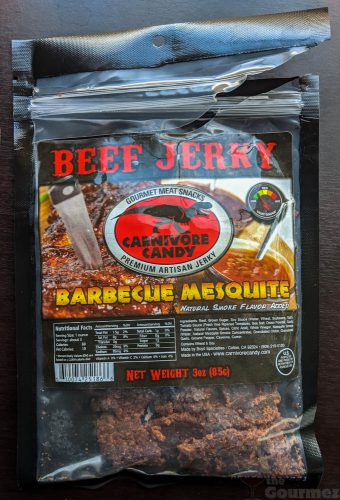 This falls somewhere between old-fashioned style jerky and jerky sheets in terms of style. It tastes of a baked-in sweet barbecue sauce, rather than what a smoke purist might prefer. But the smoke is there, and yes, it’s mesquite, though I find it doesn’t blend all that well with the sauce’s flavor. It doesn’t blend badly, either. More on the meh side, and the jerky is too juicy for my preferences. You should note that I also don’t like my steaks rare, so draw what conclusions you will. I wouldn’t pass up more, just would maybe seek another flavor instead.

The Flower Trimmings Teriyaki is another classic combination. 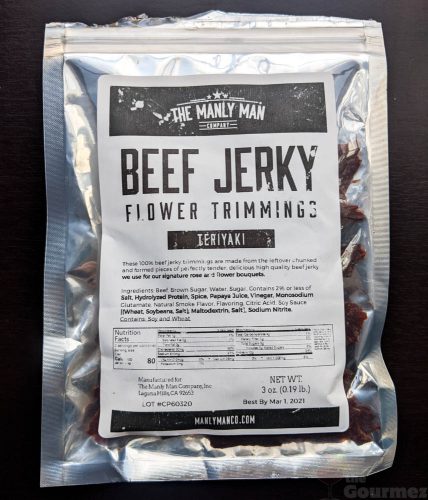 I like my teriyaki with a stronger taste of soy sauce than this offers, but otherwise, it stood up well. And I was again entertained imagining all the “petals” cut out of the irregular, teriyaki jerky sheets and chunks.

The Carnivore Candy Draft Ale is another in the Premium Spirits Series. 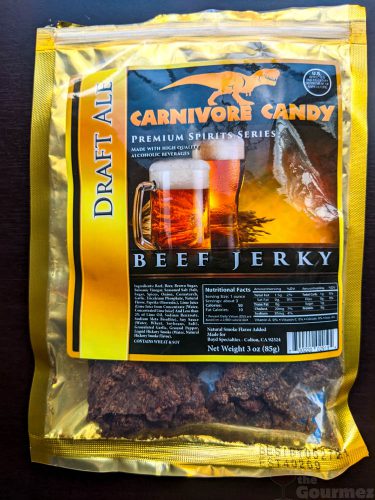 I was surprised to find I preferred this one over the whiskey, as I definitely prefer whiskey over beer. The hops give the jerky a deeper profile than the whiskey flavor, though there’s no spice heat. Instead, there’s a rather unexpected ingredient for a beer-based snack: lime! Just like the papaya juice, I would never have guessed it was in the mix. The Draft Ale flavor makes for a unique jerky that intrigues my taste buds. Plus, it pays tribute to that old-fashioned style of jerky, which I prefer.

Overall, the draft ale flavor was my favorite, and it surprised me that the Flower Trimmings Original was my second favorite, as I’m not usually into “original” anything, but its flavor profile was great. I’d eat any of these again … except maybe the Pizzo’s Pepperoni. There’s enough variety in this gift box to excite any jerky fan. The only type I could imagine adding is a Slim Jim-style stick. Perhaps those are reserved for the bouquets.

The Best Beef Jerky Gift Box is currently available in its usual cardboard box or in a tactical Christmas stocking ($89) or an ammo can ($85), if you’re looking for a likely late-to-arrive Christmas present for that manly man in your life. The “Man size” includes 23 ounces of jerky in the standard gift box, which honestly? Is not that expensive. Based on 2018 prices, the average cost for that much jerky in the supermarket would be $47.58. So getting this variety, with enough options that your jerky fan is bound to love at least some of them, seems worthwhile to me.

Or you can always send him or her apologies for not putting your order in on time, with one of those amazing meat bouquets. There’s even a Bloody Mary box option that includes one. 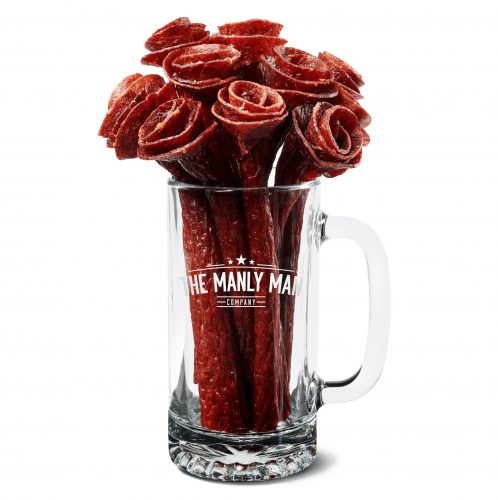 Or send it to me. Just because.