My introduction to the Bodegas LAN winery came over churros and chuleton. 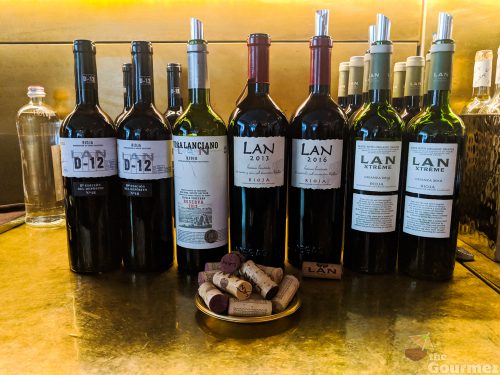 I was invited to meet the winery’s CEO, Enrique Abiega, and USA export director, Trinidad Villegas, at Bellota, a Spanish restaurant that’s part of San Francisco’s Absinthe Group. Obligatory disclaimer: This was a new media lunch, so the food and drink I’m about to write about were free to me to enjoy. As were the many jokes Enrique and Trinidad made about how they started at the winery just after high school or their confirmations—as I turn 40 next year, I appreciate this exercise in denial.

Bodegas LAN winery makes wine in the Rioja wine region of Spain. As Enrique described, LAN is an acronym for Rioja’s three provinces: Logrono, Alava, and Navarra. For a lot of people, Rioja is a synonym for that great wine they can pick up at the grocery store for cheap. Which is often the case! Spain has been my favorite wine region since I first started drinking fermented grape juice, partly because it delivers great quality at affordable prices. It still took me a few years to try Spain’s white grapes, however. But after years of disappointment with the chardonnays and sauvignon blancs of the world (I was young!), I took one sip of an albariño and discovered a whole new world of white wine potential. 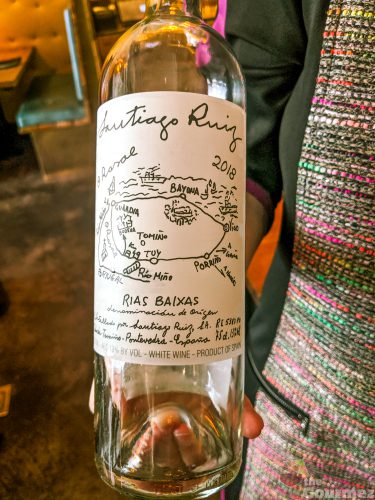 The Bodegas Santiago Ruiz 2018, an albariño-dominant white wine from the Rias Baixas, is typical of the grape’s beautiful acidity. Its tart lemon meringue notes are lovely for waking the senses to a new day—or to lunch, as the case may be. Orange blossom notes welcomed my taste buds, for sure.

My fellow wine writers and I were handed a glass of the Santiago Ruiz to begin our tasting. But the true reason for the event was to promote Bodegas LAN’s new organic wine label: Xtreme. 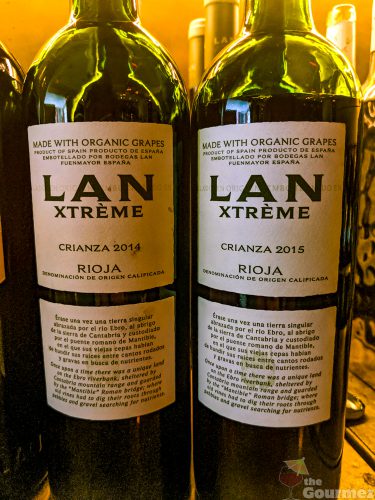 As Enrique put it, Xtreme came from an understanding that organic grape-farming techniques are simply the way the world is going—and should be going, with today’s climate-change reality. It costs a good 25% more to produce grapes that are certified organic, but the hands-off approach to winemaking produces lovely expressions of terroir from the Viña Lanciano Estate vineyard, where Bodegas LAN’s organic parcels are located.

We tried the 2015 and the 2014 vintages of this tempranillo wine. Both had quite a few notes that reminded me of pastry. The LAN Xtreme 2014, which is just now making its debut in the USA, plunged me into a cinnamon and spice fantasy, with rustic notes of elderberry and red cherry carrying the spice. It made for a perfect complement to the churros I mentioned earlier. 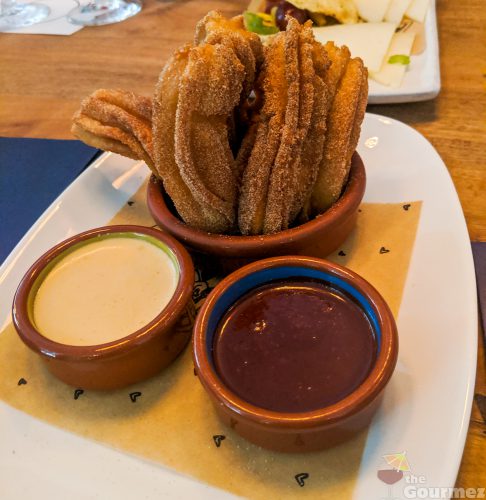 Yes, I am jumping around in the sequence of events. But the wines put me in a dessert mood that lingered until the writing of this post. The LAN Extreme 2015, which is on the market now for about $18, offered notes of mixed berry pie à la mode. A touch of pomegranate on the finish added to the fun variety of flavor it contained.

Also fun? Bellota’s play on paella for autumn in America. 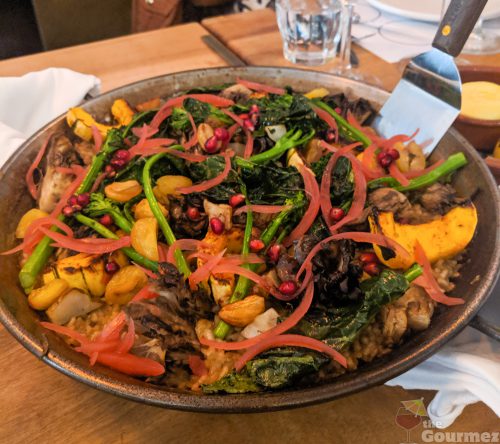 The dish featured classic fall ingredients such as chestnut, pumpkin squash, mushroom, and sunchoke. Although it also had pickled red onion and pomegranate seeds, I found myself longing for more acidity and the lively flavors a more typical paella would bring. But it was very inventive, regardless! And it went great with those two vintages of LAN Extreme.

As did the chuleton: a platter of wood-grilled flannery beef and Basque-style chimichurri. 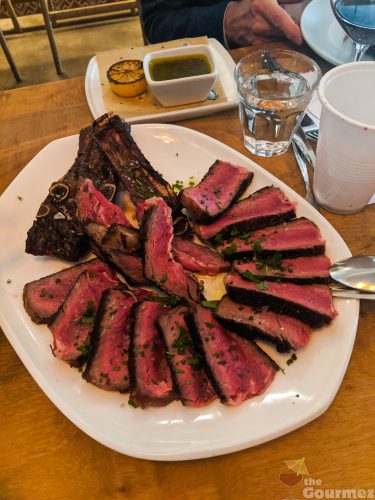 All the wines we tried that afternoon made great companions for the food. Those included two vintages of Bodegas LAN’s D-12 wines, which also retail for just $18. They are named after LAN’s tradition of placing the wines with the most intense noses, post-fermentation, into vat number 12. And wow, their noses were fantastic. 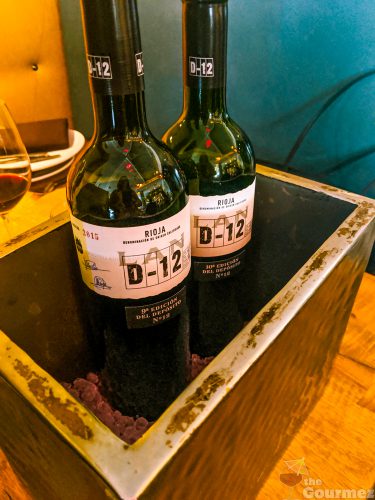 The D-12s are made from different parcels year-to-year, as the winemaker, María Barúa, is honoring aromatic intensity rather than pure terroir expression with them. The LAN D-12 2015 had strong oak with violet and bamboo notes on tasting. It really smoothed out with food, allowing the bevy of that food’s flavors to shine. The heirloom tomato and stonefruit salad had no problem doing just that. 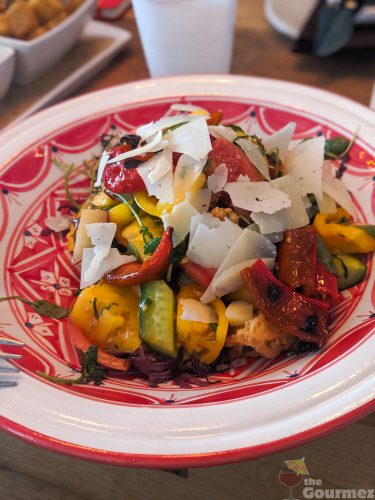 The roasted jimmy nardellos peppers and tarragon in that salad sent it soaring. I highly recommend it, especially when tomatoes are fully in season. We also enjoyed an omelet of swiss chard and potatoes topped with chorizo and feta, a well-seasoned arugula and radicchio salad, and some of the best patatas bravas I’ve had. 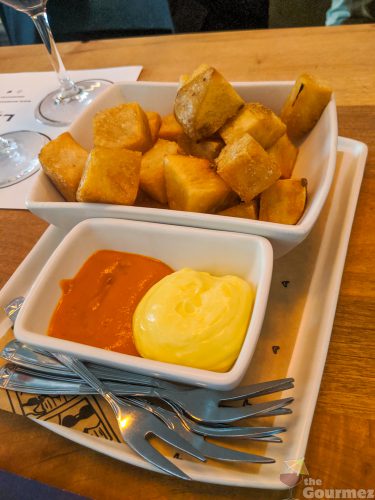 The potatoes were crisped so the crunch continued until your teeth fully sunk in. And the chipotle sauce and smoky aioli? Yum.

The lighter-bodied 2016 LAN D-12 had a slightly more restrained nose, but one that still overflowed. It offered more of a cold-climate profile with blueberry notes and spice that snuck in. With the food, red cherry and plum also showed up.

As did the 2013 and 2016 LAN Édicíon Limitada wines, the most expensive ones we tried at $45 each. They are single-vineyard wines, produced from the Pago El Rincon vineyard in the Viña Lanciano estate—yes, the same estate as the Xtremes. 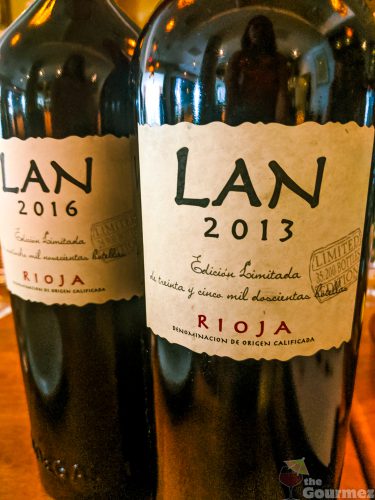 I found them quite attractive, especially their shared black raspberry gumdrop notes. The 2013 LAN Édicíon Limitada also offered the smooth, velvety richness of boysenberry and milk chocolate with memorable bright cherry. The 2016 LAN Édicíon Limitada went the way of a French fruit tart, full of vanilla bean custard and baking spices, though some savory notes came out with food.

My wine writer friends who are more on the collector side thought the LAN Édicíon Limitada was a steal, but let’s be real. Even $45 is too much for some of us. A lower priced, but still delicious, offering from the same vineyard is the $25 LAN Viña Lanciano 2012. 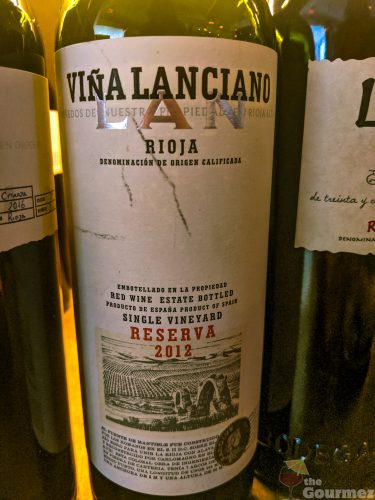 This is LAN’s bestseller, and they use Russian oak for its aging—the winemaker is quite fond of experimenting and apparently did her studies in university on the effects of different barrels on winemaking. Our hosts hypothesized that her winemaking today is merely an extension of those experiments. This wine’s balance struck me more than any of its individual notes, though I appreciated the violet, rose, black cherry, star anise, and mace that I picked up. A playful splash of orange brightened the finish.

All in all, the Bodegas LAN winery’s line impressed me greatly. I am always thrilled to try more wines from Spain, and these really highlighted the layers that tempranillo offers; some of the wines even reminded me of my favorite mourvedre and GSM blends.

Whether you’re looking to support organic wines or merely impressed with the value of Spanish ones, Bodegas LAN’s portfolio has something for you. Thanks to Enrique and Trinidad for sharing their wines with us, and to Gregory Vine and Grape Expectations for hosting us.