A highlight of my blogging year was attending the 2016 Vintage Port Preview Tasting at the Fairmont Hotel this past June. Obligatory disclaimer: That means this tasting experience was free to me. 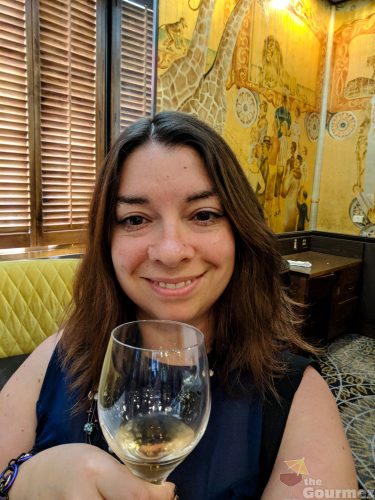 Vintage the Gourmez with vintage murals circa Prohibition!

I’ve been drinking wine for about a decade and a half now, and I knew from my first sip of Port, or Porto, that I would always love the dense, sweet, richly layered and fortified wine (i.e., brandy added to it, resulting in a higher alcohol content) for dessert. Of course, there’s no requirement Port be drunk only at dessert, but I do consider it and the family of dessert wines, fortified or simply aged long on the vine, best at the end of a long evening because of all the pondering their complexity elicits. 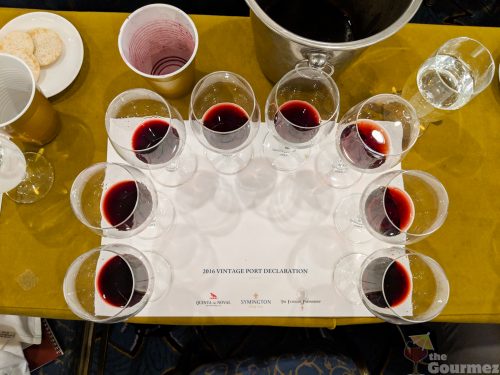 Not that that stopped me from sampling two flights’ worth midday during the 2016 Vintage Port Preview Tasting. It’s rare that Port producers come together and declare a vintage year for Port, but the 2016 conditions were ripe for it, and thus, this preview tasting. So what makes a Vintage Port season?

In large part, it’s the producers recognizing the fine quality of their Port in production and hearing the same from their compatriots, resulting in an official declaration from the region. 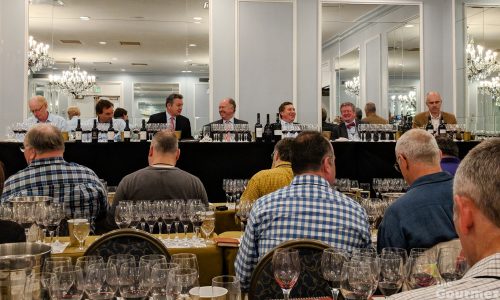 That photo, my friends, is of a laudable collection of Port producers, all based in the Douro region of Portugal where Port is made. Due to the cool and wet start to the 2016 farming season, the slow growth of the grapes all year, and a late veraison (color-changing) from a super hot summer, these Port experts suspected 2016 would yield exceptional Port in the glass. And small quantities, too, as such seasons tend to result in small harvests and make the wines more rare, and more valuable, as time goes on.

The producers tasted their 2016 vintage Ports as they aged, and their assumptions were confirmed and a Vintage Year declared. I can confirm the quality of 2016 Port myself after this delightful tasting. It consisted of two parts: the 2016 Vintage from several of the finest Port estates and select aged offerings from those same estates, also from Vintage Port-declared seasons, of which there are generally two to three a decade. The aged offerings ranged from a 1980 Dow Vintage Port to a 2007 Fonseca Vintage Port. 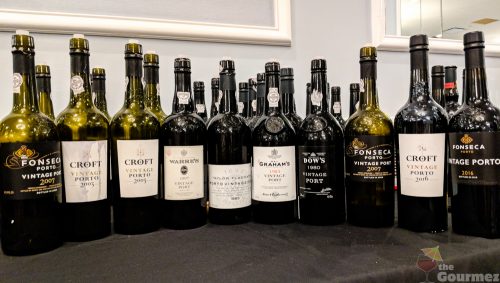 Of the aged ports, the 2000 Quinta do Noval Vintage Port (5/5) was my favorite along with its brother, the 1994 Quinta do Noval Nacional Vintage Port (5/5). The 2000 excels by merely existing, drawing praise to it rather than demanding acceptance. Weedy tannins, licorice, and dried dark fruits abound while pepper comes up at the end. The 1994 Nacional is made with native Portuguese grapevines that managed to thrive without having foreign rootstock grafted onto them, a rare achievement in Europe. It smelled of flowers on the verge of dropping petals and was smooth with horehound candy, licorice, graham cracker, and vanilla notes.

You could tell how well age has matured those Ports by comparing them with the 2016 Quinta Do Noval Vintage Port (3/5), which I found punchy with alcohol heat, but mostly with its desire to fit in. 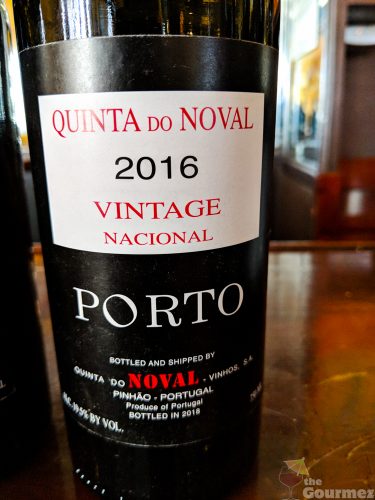 It had a juicy, veined mouthfeel with lots of cherry in the nose and eucalyptus. In time, it’ll find its stride.

By and large, though, I preferred the 2016 Vintage Ports to their older cousins. That surprised me, but I think it attests to the quality of this vintage, and to the discernment of the producers in recognizing their potential in this moment and for the next few decades of aging. The Croft 2016 Vintage Port (5/5) was one of those. 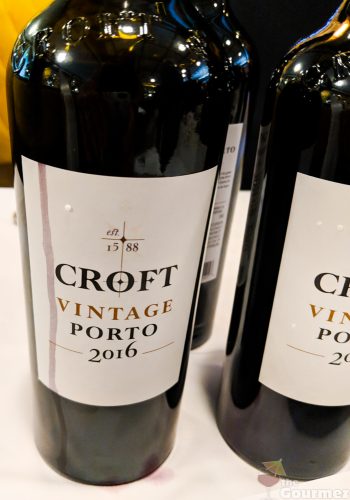 It’s genuinely great now with violet, pineapple, and strawberry notes and a dash of boysenberry that shows restraint. Very smooth. Granted, I only preferred it by a point over the elder 2003 Croft Vintage Port (4/5), which smelled like circus peanuts and was also very smooth with mace and annatto spices coming out to play.

Although I did not have an older Vintage Port to compare it with, I am also comfortable recommending the Smith Woodhouse 2016 Vintage Port (5/5). 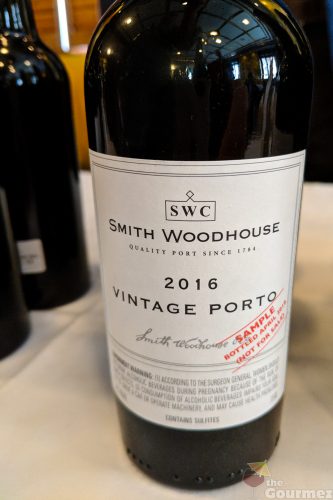 Okay, more than comfortable, per my tasting notes: A full cherry pie with licorice buried in the filling. Whipped cream goes on top with sprinkles of cardamom and pepper to keep it lively.

What aging ultimately offers for fortified wines as good as these is the chance for more layers to develop, particularly nut, caramel, and richer, dried fruit notes. My final recommendations from the 24 Ports tasted this day are both from Warre’s and both rated 4.5/5 from me. The 1997 Warre’s Vintage Port impressed me with its warm prune notes, conjuring the coziness of a fireplace. 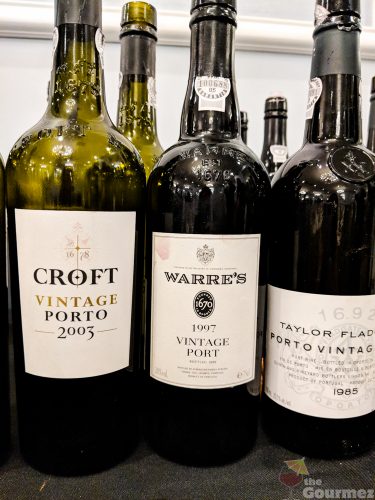 Smells of cherry vanilla, and a little menthol, combined with the heavy velvety mouthfeel of gum syrup and a bit of fennel on the finish. The 2016 Warre’s Vintage Port provided quite the contrast, though still neared excellence. 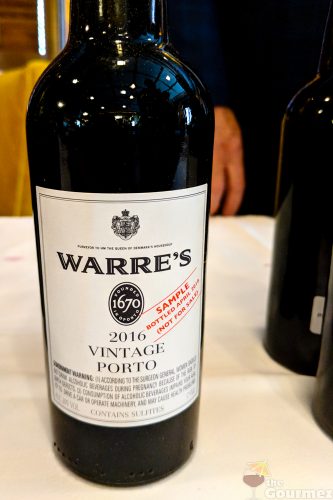 It imparted the satisfaction of a great idea coming to fruition with its strong floral nose of lavender, rockrose, and tea leaves. It’s a bright Port, though the flavor deepens as you sip. Finishes with raw sugar.

Those are two amazingly different flavor profiles from grapes harvested from the same three vineyards that comprise the Warre’s estate, which is owned by the Symington family today. I’d be intrigued to try the 2016 Warre’s Vintage Port in twenty-one years to see how it compares to my notes on the 1997. I’ll hope for another Vintage Port Preview tasting that year, because I know if I buy a bottle now, I’ll never be able to resist drinking it that long. I’m an enthusiast, but not a collector. I don’t have the patience for that.

Yet I enjoyed getting a peek into what pleasures might await if I were so inclined, via this Vintage Port tasting. I’ll leave you with a glass of the Fonseca Extra Dry “Siroco” White Port, a whole other ballgame of Port exploration of which I’ve barely scratched the surface. 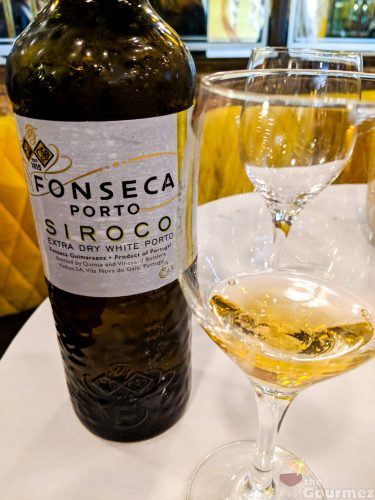