Last January, I was delighted to visit Chateau Montelena for the first time on the invitation of Calhoun & Company. Obligatory disclaimer: That means the Chateau Montelena Dream Tasting was entirely free to me. Indeed, it was a media and industry event, and I was thrilled, and a bit intimidated, to be included among the upper echelon of wine writers and industry elite present. Once the wine started pouring, however, it had my full attention. 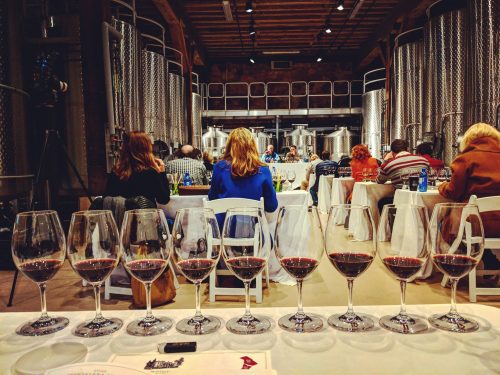 But I had to get there first. I’ve reviewed Chateau Montelena’s newer releases multiple times, but I had not yet had the chance to explore the grounds of this historic Napa Valley winery or their historic wine collection. From the lower parking lot, one passes by Jade Lake, designed as a Japanese garden with gorgeous vantage points. In the light drizzle of an overcast day, this pagoda appeared like a siren in the mist. 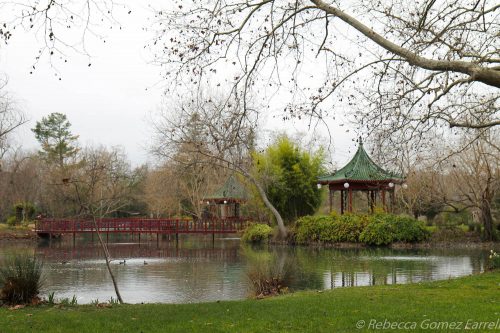 Its wonderful silhouette in twilight has served as my laptop’s wallpaper ever since. I’m quite excited we’re only a few months away from similar weather again.

Up the stairs, past the lake and an outbuilding, resides the Chateau proper. 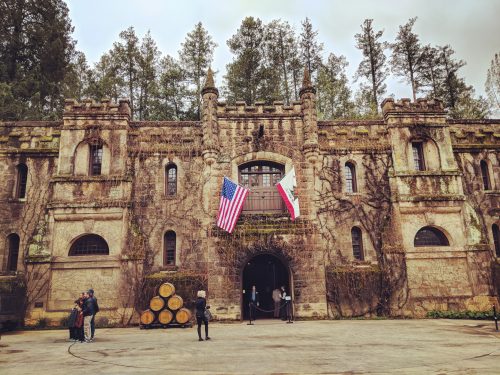 Built in 1888, it looks much like a European stone castle of a Gothic age, or perhaps like the well-maintained armories found in many US cities. Our tasting commenced on the bottom floor, in the barrel rooms. 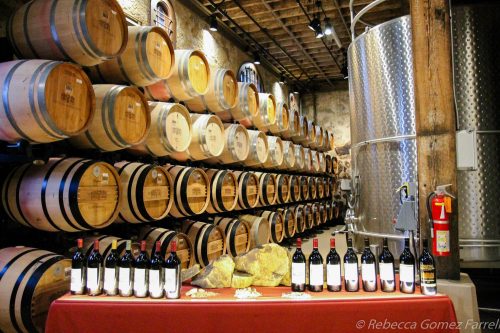 Upstairs is the tasting room, charming for its English-countryside simplicity. 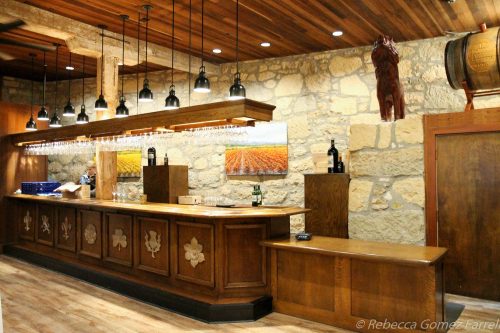 Also upstairs is the Great Room for entertaining, where we enjoyed our just rewards for tasting through 15 wines: an array of appetizers enjoyed among Medieval-inspired tapestries and furniture. 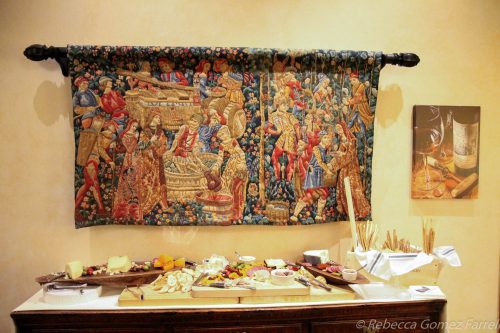 The tasting itself was led by Bo Barrett and Matt Crafton, who led us through fifty years of winemaking history at Chateau Montelena. 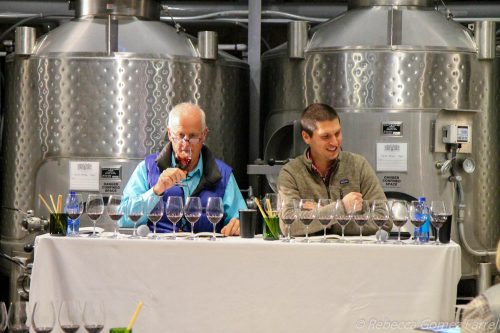 Bo on the left, Matt on the right.

Bo began winemaking under the tutelage of Mike Grgich after his father, Jim Barrett, bought the winery in 1972. Bo has been chief winemaker since the early 1980s and is CEO to this day, with Matt at the day-to-day winemaking helm. During its first decade, Chateau Montelena took home the storied Judgement of Paris Best White Wine award for its 1973 Chardonnay. 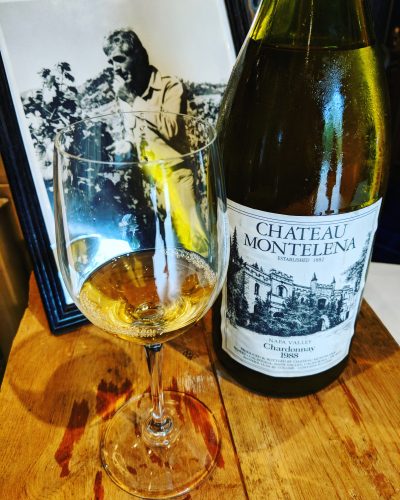 It’s one of the best chardonnays I’ve had to date, remarkably light-bodied for a 30-year-old chardonnay. Mace, cardamom, and golden apple notes spoke with the acidity of lemon balm. This beauty took the time required to fully absorb the best qualities of its oaking.

Chardonnay was not the focus of the Dream Tasting, but rather, cabernet sauvignon. The estate cabernet vines were first planted in 1972, and even then, Jim Barrett had a philosophy that good wine should be made to age well. They’ve saved 10% of each vintage in magnums for aging ever since. Reader, I was the lucky recipient of that practice. 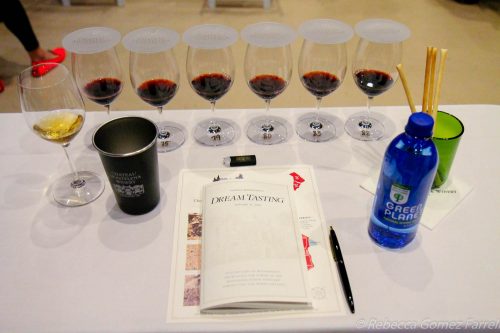 We tasted in two main flights. Going through an estate wine vertical like this is less about rating the individual wines and more about gaining insight into how each individual season affected the grapes. Some wines bore the less pleasant aspects of aging: too much nail polish remover astringency on the nose and finish and the loss of lively fruit notes. But most of the wines were quite drinkable regardless, speaking to the strength of their backbone and quality winemaking: the Barretts have achieved their early goal of ageability, unquestionably. 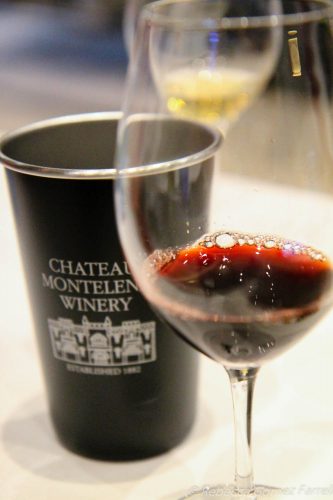 Of the cabernets aged 30 years or more, the 1974 and the 1988 impressed most. The former made me think of stir-fry pairings with its notes of bell pepper flesh and leaves, turmeric, and toasted coriander. Its thick body still pleased. The latter offered the first cocoa notes of the flight, which contributed to its beautiful balance. Its fruit notes were also still hanging in, a great feat. The 1994 cabernet could still pull rank over most commercial cabernets on the market as a picnic wine with mild tannins and luscious black and blue fruit notes. Pick some fresh berries to complement it. 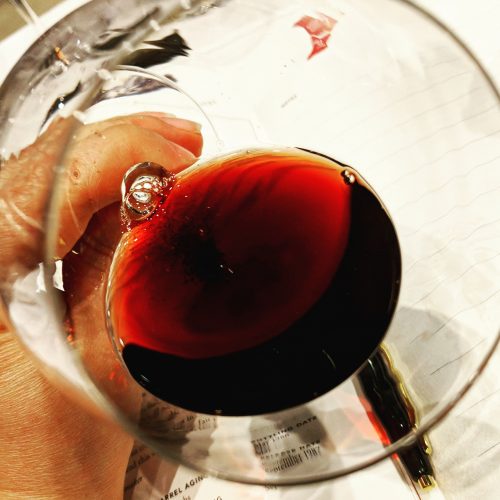 But the Aughts? Oh, the Aughts! These wines are in the “enjoy now” bulls-eye range, when aging has amplified and deepened their flavor profiles to peak drinkability. The 2007 had all the makings of a strawberry and raspberry parfait. With all that fruit, it’s an easy crowdpleaser though a green sapling finish anchors it in reality, so you don’t get too carried away with dessert. I’d be intrigued to see how it holds up in another decade.

After tasting all the wines, I found myself returning to the 2001 cabernet. It conjured images of walking in a cold mist by an unknown spring, beckoned on by a whisper of danger. Though it’s possible the stormy weather influenced that imagery.

Upstairs after the Dream Tasting was complete, we enjoyed the current and almost releases from Chateau Montelena while we mixed and mingled and nibbled. The 2011 Estate Chardonnay and 2015 Estate Cabernet Sauvignon are both worthy of purchasing and enjoying now, though the Dream Tasting made clear how well they would also do with aging and the cabernet is likely be to kept aging for another year before release. 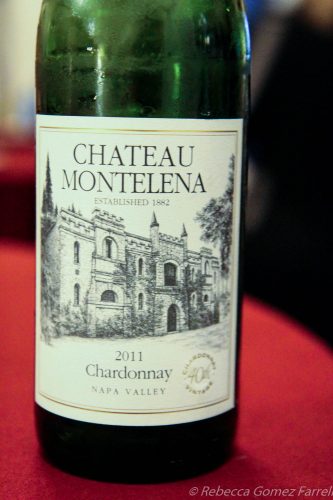 The chardonnay had lots of baking spice, floral lychee, and notes of golden pear and golden apple. The cabernet showed great potential with Morello cherry and currant notes spiced well and laid out on a backbone of bay leaf.

But there was also food, of course! I found myself quite in love with the crispy texture of these pork belly bao bites. 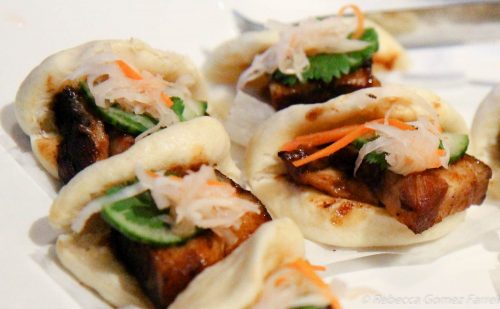 I also admired how fried sage pulled everything together for these roasted pork napkin dumplings with pear-ginger compote. 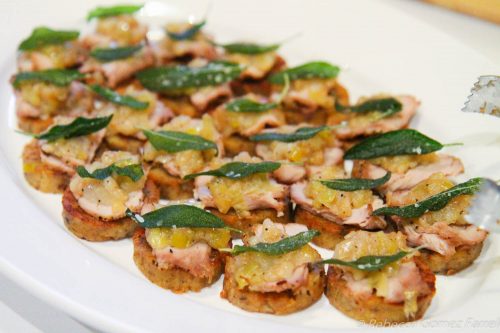 But I did not take notes on the rest of our reward feast. Instead, it was time to turn back toward the parking lot and the long drive home to Oakland in weather that quickly became a full storm. I could not see Mount Saint Helena as I made it to my car, but the vineyards in the distance created their own mystical atmospheric conditions. 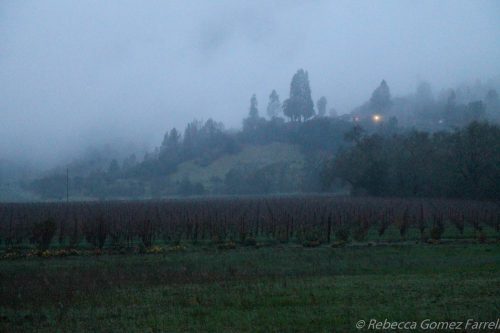 For a fantasy and horror writer such as myself, you can imagine how enchanted I was by such lingering images. Chateau Montelena truly put on a dream tasting, with a bit of an assist from the weather. 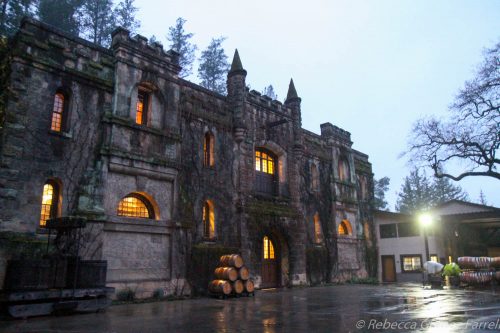 Although I can’t promise you quite that quixotic of a wine tasting experience, Chateau Montelena is open daily to the public for tasting of new releases. Make an appointment to try their library wines or to take a tour of the estate.