Home / Product Reviews / The Shrubbery’s Shrubs! Aka, the Joy of Drinking Vinegars

The Shrubbery’s Shrubs! Aka, the Joy of Drinking Vinegars

Posted in : Product Reviews, Recipes on September 5, 2018 by : The Gourmez 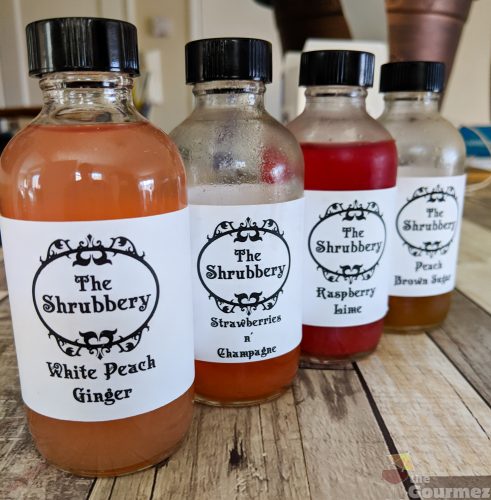 Finally, a shrub syrup that can rightfully call itself drinking vinegar! I’m so glad I stumbled across the Shrubbery’s stand at Worldcon in San Jose last month. I’ve been searching for a shrub up to the task of helping me cut down on alcohol drinking at home. Shrubs, you may be wondering, are not a useful tool for outdoor landscaping, in this case. They are simple syrups that use vinegar as a base for combination with fruit, herbs, and/or spices. Their resurgence came this past decade after spending the 20th century in a forgotten pantry of Americana.

As they’re often used in cocktails, I assumed shrubs would also be ideal for combining with soda water for evening refreshment. The problem? Most shrubs sold in grocery stores and specialty liquor stores have a strong emphasis on the sweet over the acidic, at least to my palate. That does not aid my quest for fewer calories, the primary reason I’m aiming to drink less alcohol.

Enter the Shrubbery! One sample sip of the peach brown sugar shrub and I knew I’d found what I’d been looking for, finally quieting a certain U2 ballad on constant replay during my quest. 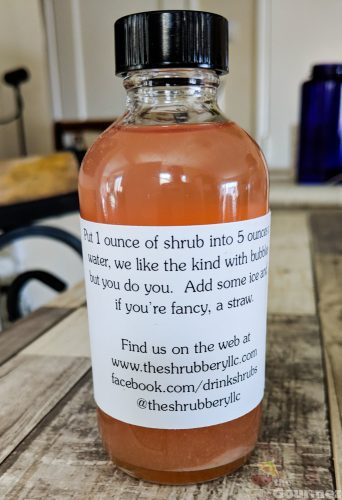 These can properly be called drinking vinegars, another name for shrubs, as the wine vinegar is strong with them. Which means they may overpower your taste buds, but may I remind you that there are plenty of sweeter options for sale on a grocery store shelf?

I bought a mix ‘n match sample pack at Worldcon 76, so I could try four different flavors at home before committing to the Shrubbery’s standard 16-ounce bottles. There are currently six types available on the website at $28 each, which includes shipping: lemon lavender, white peach ginger, strawberries ‘n champagne, blackberry balsamic, raspberry lime, and peach brown sugar. Sixteen ounces flavors between 12 and 16 liters of soda water for me, as I’ve found that a shot or a shot and a half offers the right amount of tang and zestiness for my beverages, depending on my mood.

Of course, shrubs are mostly used for cocktails these days, and the Shrubbery markets with that in mind. Each bottle comes with a different cocktail recipe, which have a much higher shrub to liquid ratio than my evening soda waters. The blackberry balsamic boasts this one inspired by Steven Universe: 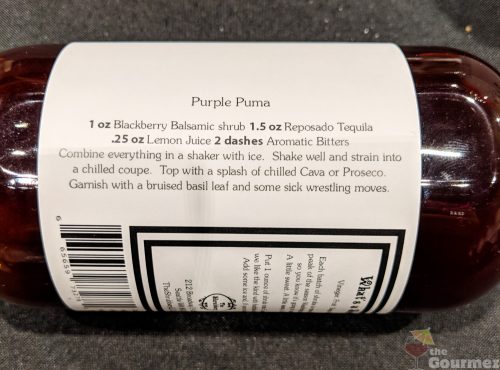 The Shrubbery fully embraces geek fandom—that’s why owner Rebecca sells at events such as Worldcon. The Shrubbery name is a callback to Monty Python and the Holy Grail, as any true geek knows. Each bottle has its own nerd credentials made known through those featured recipes. 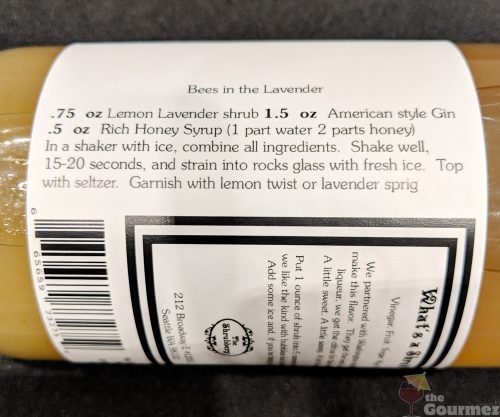 The Shrubbery also features fresh Washington State produce in combination with its sugar and vinegar, always a plus.

I haven’t used the Shrubbery’s drinking vinegars for cocktails yet, but I do think adding a few bitters dashes to my beverages takes my new shrub-powered soda waters up the next notch, and I’m sure that combo would do wonders with cocktails too. I’m ready to boldly go explore this brave new universe of drinking vinegar combinations, armed with the Shrubbery’s concoctions. 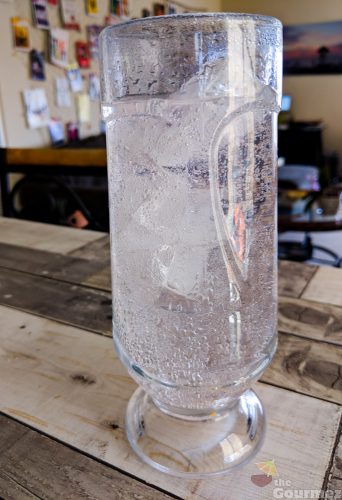 I could no longer contain my love for the Shrubbery and wrote this 29 August 2018.