For my last post on the 2017 Wine Bloggers Conference (WBC), I want to highlight the caviar tasting experience Jordan Winery has developed with Tsar Nicoulai Farms. I tried both during a WBC Friday night excursion dinner, which means the food and drink enjoyed was offered at a very steep discount to me <—  Yes, that is my obligatory disclaimer. 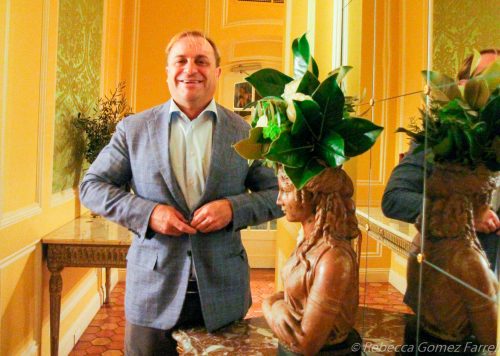 I’m not sure I’d choose a caviar pairing experience on my own, which is why I was thrilled to have Jordan Winery offer the opportunity. Great caviar is an expensive indulgence, and Jordan Chef’s Reserve Caviar by Tsar Nicoulai, developed especially for pairing with Jordan wines, is no exception to that rule: $135 per ounce plus shipping. 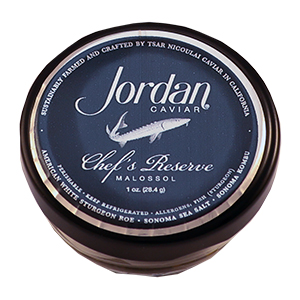 But if you can afford such luxury, the experience it provides in combination with Jordan’s stellar wines is well worth pursuing. Tsar Nicoulai Farm’s caviar comes mostly from white sturgeon sustainably raised in Wilton, CA, outside of Sacramento. Roe from salmon, trout, and paddlefish sturgeon are also among their offerings. The Jordan Chef’s Reserve Caviar, sold directly from the winery’s website or at the winery itself, was particularly appealing, flavored with Sonoma salt infused with seaweed. “Hello, Ocean” and “Fantastic” were my notes on it. The Chef’s Reserve, and all the caviar we sampled, came served on mini buckwheat blini, a Russian-style pancake with a spongy texture. A dollop of apple gelée accompanied them. 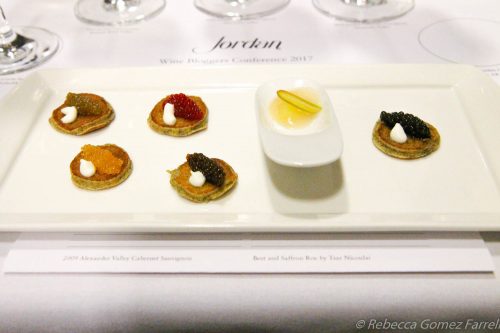 The Jordan Chef’s Reserve Caviar was one of two caviars paired with the new NV Brut Jordan Cuvée by Champagne AR Lenoble (4/5). The first was wasabi-flavored roe that combined smoothly with the brut champagne’s stately bubbles, yeast, and notes of green grape and golden apple. I can find wasabi’s heat off-putting, but this combination muted it, or rather, folded it into the wine’s inviting flavor profile. 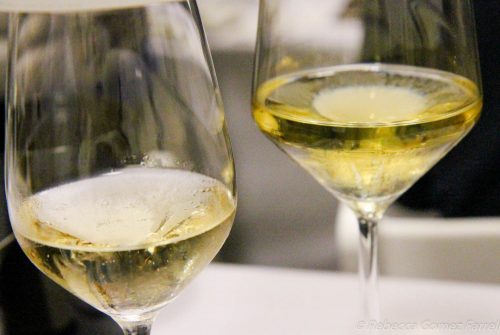 Our next pairing was ginger roe with Jordan’s 2014 Russian River Valley Chardonnay (3.5/5). A fruity chardonnay with the essence of maple and peach pastries, the ginger roe pleasingly amplified the wine’s fruit notes. 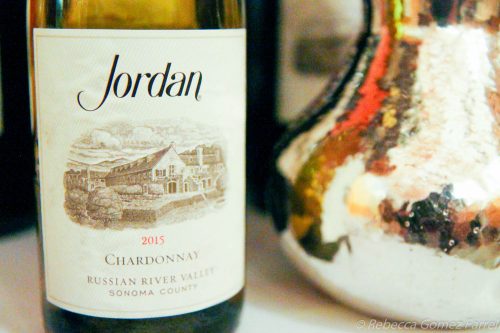 I have tried Jordan Winery’s wares before, but only late at night in hotel room parties, when the atmosphere isn’t quite right for fully appreciating them, and frankly, I’m usually focused on the cocktails Lisa Mattson, Jordan’s director of marketing and communications, concocts. Let it be said, from the first sip of Jordan’s 2009 Alexander Valley Cabernet Sauvignon (5/5) during this tasting, I was sold on the value of a luxury wine brand focusing so exclusively on two or three varietals as Jordan does. The smell alone exemplifies the mastery of cabernet sauvignon that Jordan Winery has developed. My official tasting note? “Oh my god,” which illustrates how speechless I was rendered by this delicious treat. Sure, it was also the final event of a long Friday at the WBC, but I think my reaction counts for more than that—I can usually come up with some sort of poetic imagery to describe my tastings. Instead, I embraced my bliss. 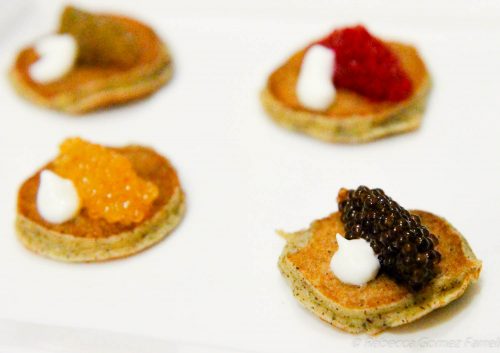 A variety of caviar tasted.

I quite liked the beet and saffron roe paired with the 2009 Cabernet, though I must admit I was too distracted by my beverage enchantment to give the caviar my full attention. That distraction extended to the white truffle roe tasted next and paired with the 2012 Jordan Alexander Valley Cabernet Sauvignon (5/5). My tasting notes again proclaimed, “Oh my god,” and added, “blue fruits,” so you can tell how deep my love ran to leave me so verklempt. The chosen pairings of cabernets and caviars enhanced complementary earth notes in each.

This Champagne and Caviar tasting, which includes more than champagne as you’ve just learned, is worth booking on its own, but I encourage visitors to Jordan Winery to partake in another wine pairing opportunity while visiting. Jordan Winery celebrates the union of food and wine; all their wine tasting experiences are by appointment only and include food pairings from the creative mind of Executive Chef Todd Knoll. We were treated to dinner from Chef Knoll after our caviar tasting, and I was blown away by how well he captured the flavors of late fall. 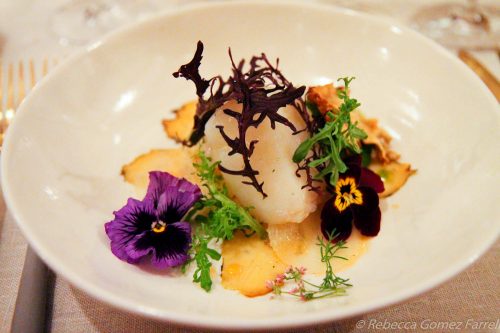 My favorite dish was grilled duck breast with olive oil confit, chanterelles, and pomegranate duck jus. The delicata squash and pomegranate flavors personified those late fall feelings, but a restrained sprinkle of nuts was most impressive, as it provided the right touch of woodsiness and crunch, or rather, the exclamation point at the end of a great dish. 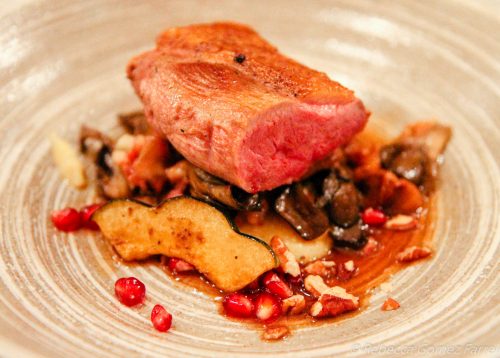 That entrée was paired with the 2013 Jordan Alexander Valley Cabernet Sauvignon (5/5). Lush applies to any of Jordan’s cabernet sauvignons, including the 2013, their current release at the time. It offered a nose of black pepper and licorice that soaked into black raspberry and blueberry compote flavors in the glass. Thyme laced throughout, while mace and cardamom left fleeting impressions. It ended with a pomegranate splash—you can imagine that went great with the duck dish. 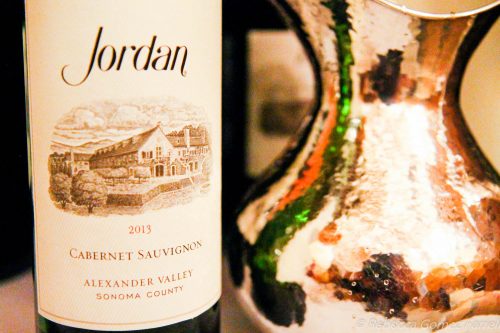 The other courses and wines at our WBC dinner were also delightful, though I will spare you full descriptions. Instead, I’ll leave you with the knowledge that Jordan Winery knows the value of excelling at doing a few things well, rather than trying to over extend themselves into many arenas. Those few things include wine pairings well worth revisiting, whether with caviar or their broader food pairings.

Perhaps if I sell my next book, a celebration visit will be in order. The barrel room beckons again. 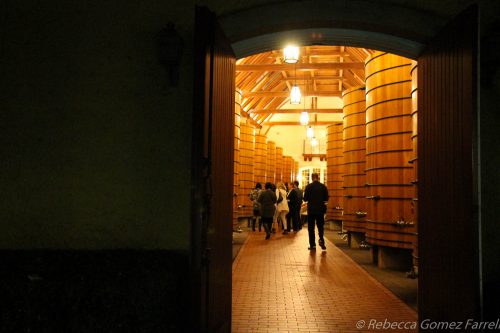