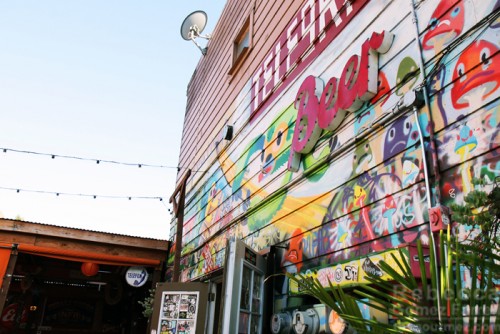 I can’t tell you how many times I’ve walked past Telegraph Beer Garden and never been entirely sure there’s anything there. That’s because I’m usually trekking into downtown Oakland a little before their weekday hours begin, so all I see is a big, black gate, a peeling sign, and a few windows I can’t peer through. 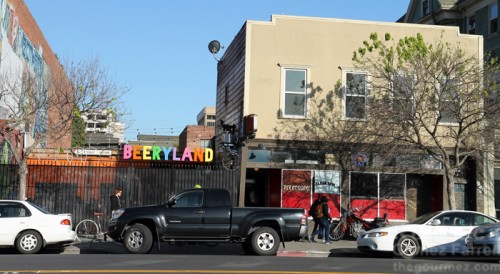 That nondescript exterior is assuredly a façade, because when this joint is open, it’s bouncing. The raucous sounds of after-work merriment make it impossible to pass by without first stepping through the open door, as I finally did a few weeks ago. 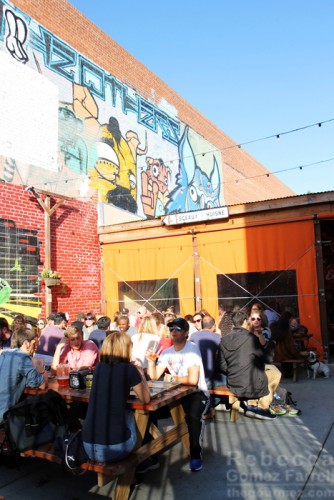 Do the same, and you’ll be rewarded with a large, mural-filled beer garden, a game room, two separate bars, alcoholic slushies, and a range of playful sandwiches. 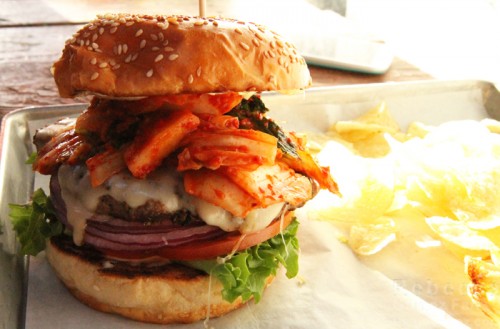 I had the Kono burger, which is Angus beef loaded up with a healthy dose of kimchi, swiss cheese, and all the normal fixins’. The kimchi was strong on the salty side and less so on the spicy one, which isn’t my favorite combination, but I thought the meat tasty. That bun’s a goner, though; it crapped out on me before I was halfway through.

My husband had the Squeal, which is a burger topped with a hefty slab of porchetta. 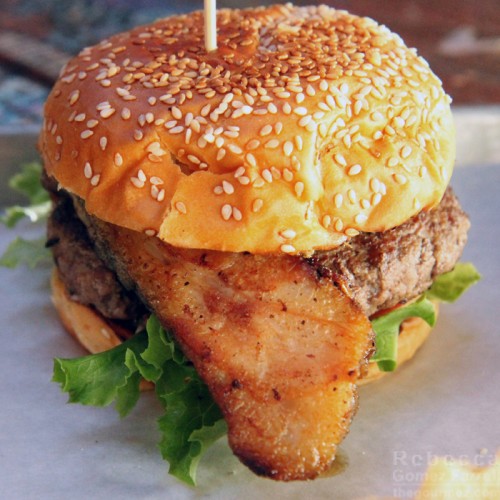 I thought he’d love it, but the pork ended up much fattier than hoped for. These are impressive burgers to look at, and pretty good ones to eat, but if I order them again, it’ll be solely for the novelty  factor — one comes topped with a wedge of mac & cheese, after all! The most expensive burgers on the list are made with half bacon and half beef — I know from multiple visits to Castro Valley’s Boulevard Burgers that bacon patties are too dry to be worth the upcharge for me.

But…beer garden, right, not burger garden? With 12 drafts and around 70 bottles available at any time, beer lovers are sure to find something refreshing to beat back the afternoon sun. If you’re more of a cocktail drinker, like myself, the back bar is your best bet. They have a full range of spirits and a handful of specialty drinks that are constantly changing — and that includes the slushies. 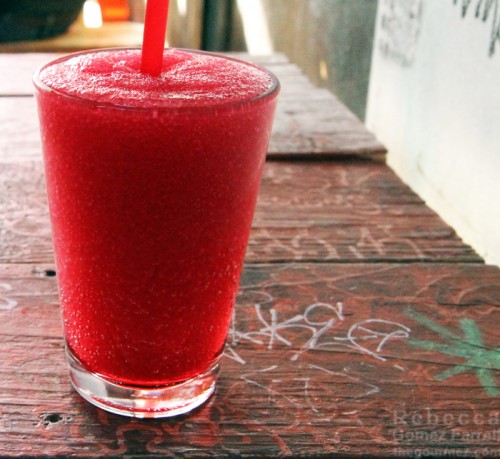 At least half the people lounging on benches had one in hand, making it likely you’ll have to wait a bit for a new batch to freeze up. My Cape Cod slushie was definitely worth it. The tart cranberry kept it from being too sweet, and the vodka nicely accentuated the berry.

I’d say Telegraph Beer Garden is best enjoyed with a crowd of friends in the early evening hours. 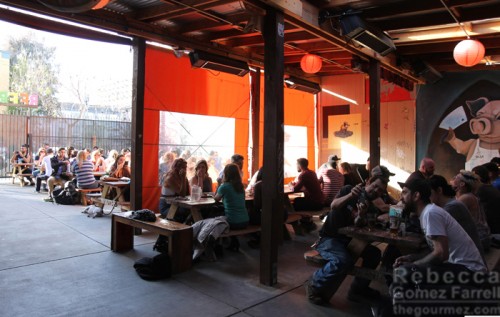 This crowd big enough for you?

But if you’re feeling antisocial, there’s room for you here too. Slink into an open spot and you can people watch for hours. Either way, it’s a great uptown Oakland destination with food and drink that’ll intrigue you, even if it doesn’t all pile up quite as nicely as it could. Who cares when another round of cider slushies is on its way?

One thought on : Telegraph Beer Garden