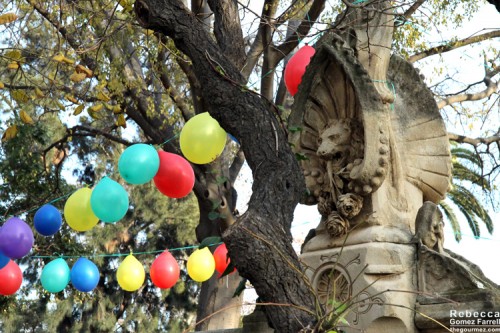 In a city as large as Barcelona, four days is never long enough to explore. On our last full day, I decided a walk to the Parc de la Ciutadella would be a lovely way to see a less crowded, greener area of the city. And getting there meant taking a greenway past the Arc de Triomf as well. 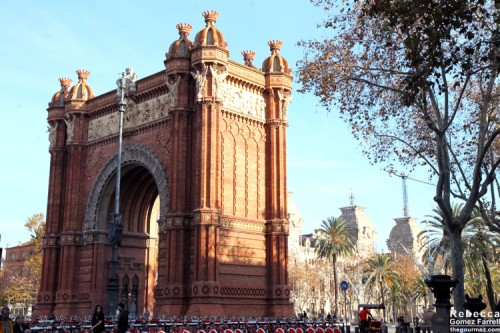 I know what you’re thinking: Barcelona has a triumphal arch too?! I thought that was Paris’s thing! Well, there is no copyright on arches, at least according to 19th Century builders, who reprised the Roman practice. London, Brooklyn, and Bucharest all boast notable examples. Barcelona’s was built as the main access gate to the 1888 Barcelona World Fair, and plenty of tourists and residents are still passing through it today. 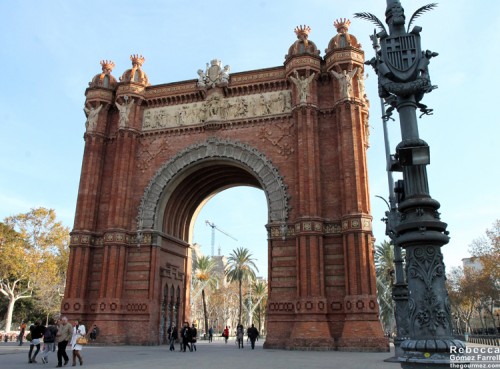 A better idea of its scale?

Nearly as appealing was the palm tree-lined pedestrian avenue that led our way to the park from the Arc, along the Passeig de Lluis Companys. 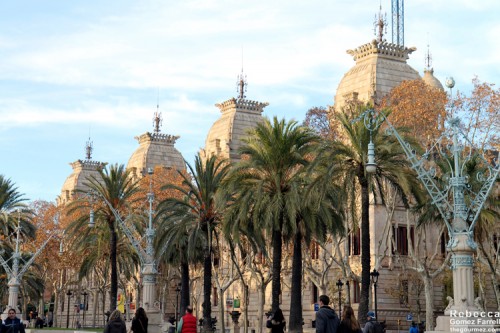 That simple line of trees and turrets is one of my favorite mental images from our Barcelona trip. The December weather was perfect for a stroll, and plenty of people were out, but the mood was relaxed, joyful almost, rather than busy as more touristy attractions can be. 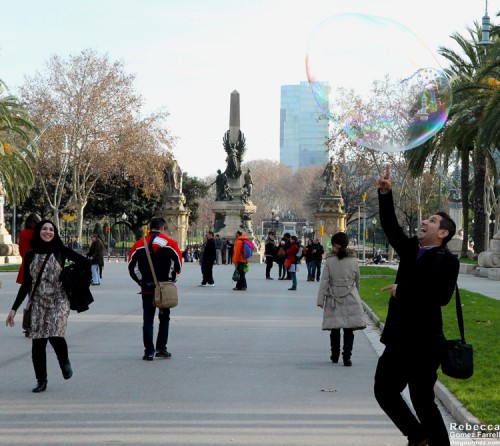 Yes, that is a grown man overjoyed as a large bubble greets him. Don’t judge; join in! There were several bubble blowers throughout the area, bringing smiles wherever they went. Along the avenue, you’ll also encounter a handful of statues before the park’s official greeters welcome you. 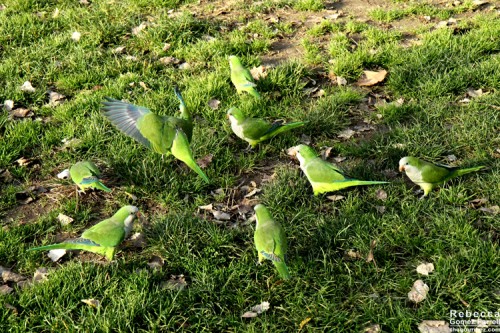 The monk parakeets are more plentiful than the bubbles, and such a delight to come across.

Parc de la Ciutadella is the city of Barcelona’s oldest green space, the descendant of land that once housed the citadel of Barcelona, a Spanish fortress that stood for 130 years and was constructed through the forced labor of occupied Catalonians. Only a few buildings remain from that period. Lucky for this photographer, they are close enough together to get in one panorama!

On the left of the Plaça d’Armes is the former armory. That now houses the Catalan Parliament, the legislative government of Catalonia, which is still under Spanish rule but partially autonomous. On the right is the Military Parish Church of Barcelona, which was the chapel during the Citadel years. 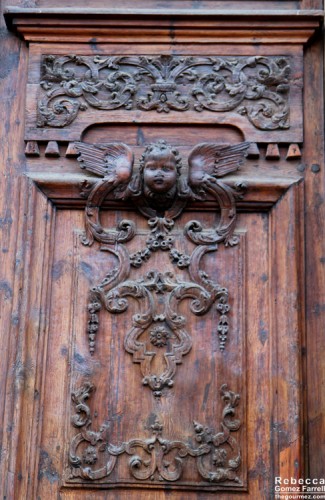 The trees in this section of the park delighted me — and the parakeets. I found them beautifully lit in the afternoon sun, in a way that stirred my artistic side, and apparently that of Sculptor Josep Clarà as his Aux Volontaires Catalans makes a perfect line with the trees in winter. 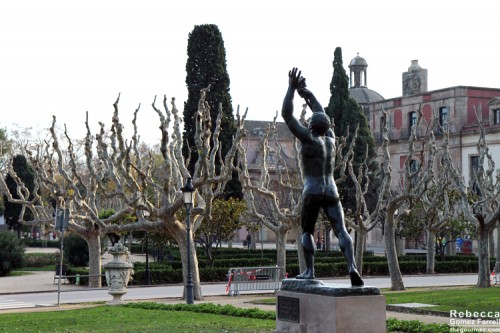 I believe they are cypress trees. Am I right? Here are a few more shots, if you can help me out! 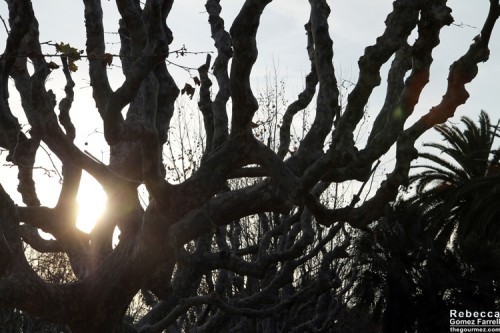 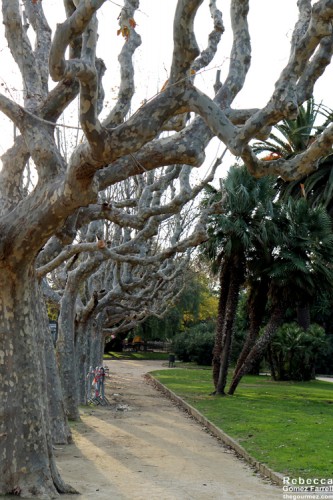 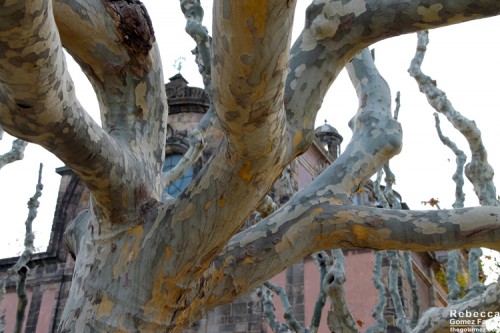 The park’s 70 acres are filled with outdoor sculptures — Desconsuelo, by Josep Llimona, whose work I fell with love with at the MEAM, is in the midst of that last panorama. I also enjoyed this massive sheet of….of…something? 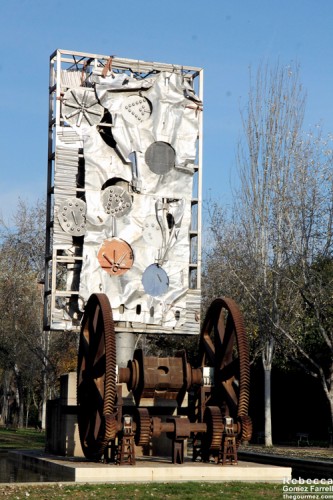 And who could resist watching a mammoth watch yet more bubbles? Not I! That mammoth is located in close proximity to the largest work of art in the park. It’s breathtaking. Simply breathtaking. We came across it from the back and sleuthed our way around the perimeter, beckoned ever forward by glimpses of gold. 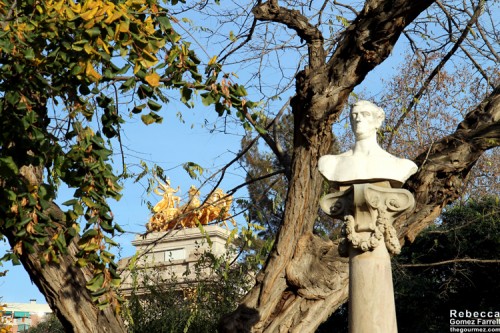 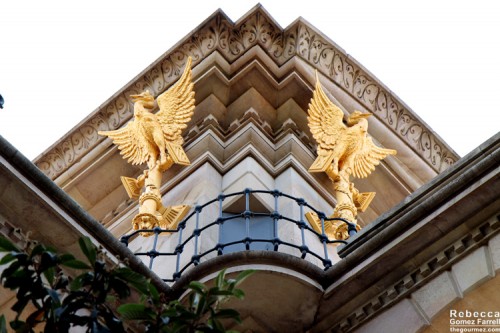 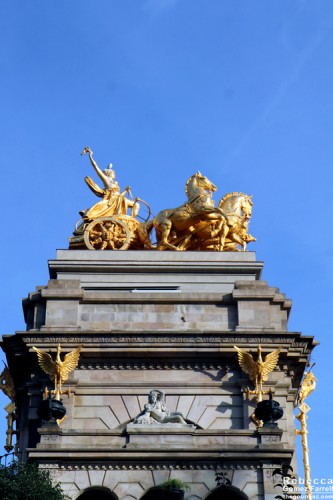 Once we reached the front, we knew we’d found a national treasure: the Cascada, a conglomeration of work from various Catalan artists, led by Josep Fontsére with the insight of young student, Antonin Gaudi. You may have heard of some of his later work? 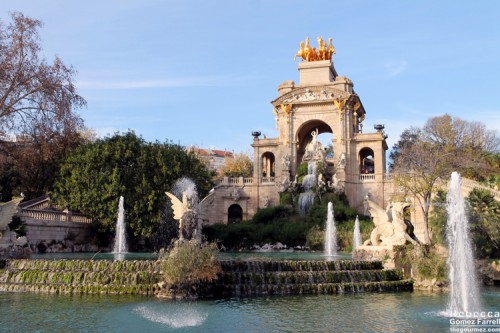 The arch itself was built first, with the statues and the fountain coming later, over a six year period from 1882 to 1888. 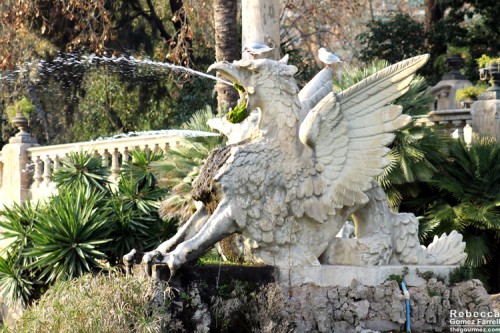 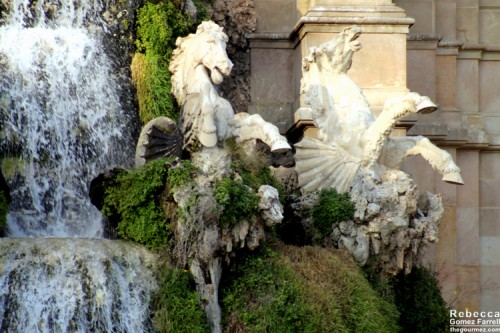 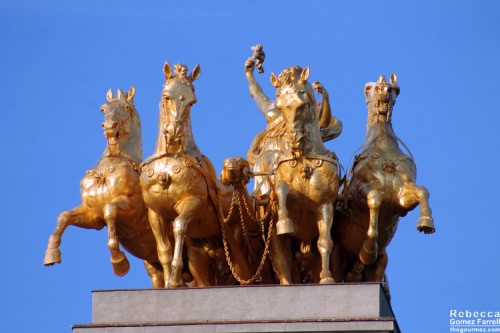 I could spend hours pondering its intricate details. Or more likely, thirty minutes, which is a long time for me to devote to any work of art. Regardless, it added much food for the soul to my Barcelona experience, which is saying a lot with how amazing the trip had been already.

The park also contains a zoo, a lake — 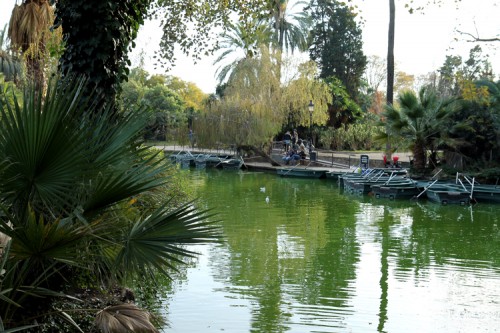 –and a number of museums that we passed on our way back to reality, or at least the reality of city life versus the beautiful urban jungle that is Parc de la Ciutadella. What local wildlife did we pass on our way back to the Passeig de Lluis Companys? 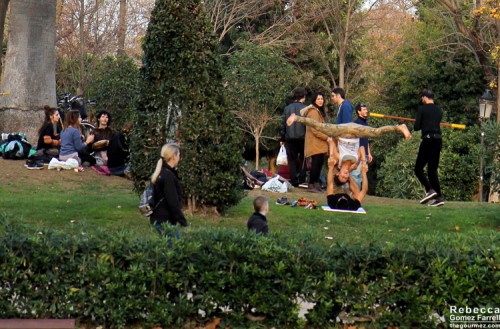 Acrobats practicing during a picnic lunch. Farewell, lovely park, and thank you for the memories. I hope to explore you more thoroughly in the future. But my way was forward by heading backward that afternoon. 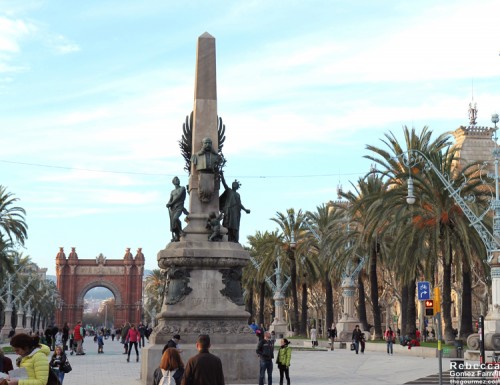 I have one final post coming on Barcelona: great food spots! If you’d like to see the rest of the photos from this album, click here.