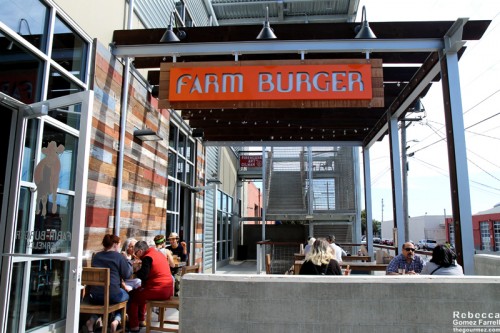 Farm Burger is a small hamburger chain, and the Berkeley store is their first on the West Coast. They are committed to using grass-fed beef, sourcing it from BN Ranch and Stemple Creek Ranch for this location. They also grind their patty meat in-house daily. Local farms provide their veggies.

The rest of Farm Burger’s stores are in the South, and those Southern roots are just as present on their Berkeley menu, with side offerings like collard greens and boiled peanuts. I don’t think this joint is going to have any problem keeping busy—it was swamped midday on a Saturday, and it’s been open since November in West Berkeley’s Gilman District development, which looked to be quite popular! The crowd only started to thin around 3 pm.

In addition to sides and burgers, there are salads, several varieties of fries, shakes, and boozy and standard floats. 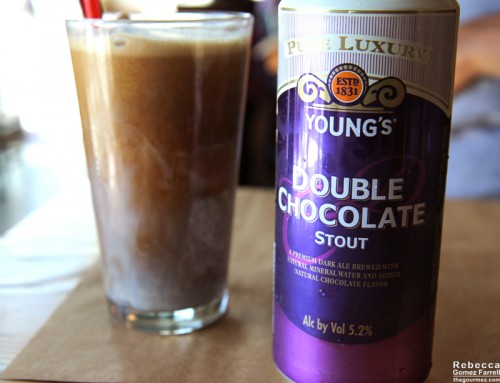 I could taste the quality of their ingredients, always a plus, but a few dishes rested too firmly on those all-natural laurels—in other words, they were bland. The fried chicken livers, in particular, are a dish I would not order again. 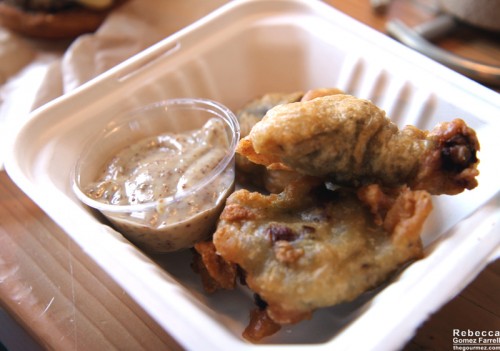 I’m not a fan of liver in general, but the usual reasons why were not on display here: the taste of iron and the silky texture of pâtés. These livers were dry, which is better than silky for me but not by much. The breading was rubbery and barely salted, if at all. That salt must have abandoned ship for the cheesy grits. 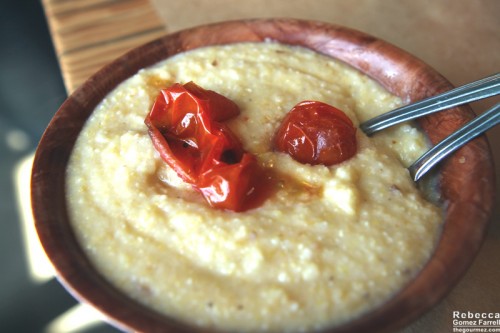 Those weren’t up to snuff for me, either, but maybe I’m spoiled from all those fluffy, stone-ground grits served up by the chefs of North Carolina’s Research Triangle. These were more, well, gritty. Did I mention the salt? Waaay too much of that for me. But the cheese flavor was robust, and when I bit into a warm, gushy tomato at the same time as the grits, it was more appealing overall.

The most appealing was the pimento cheese fries, no contest. 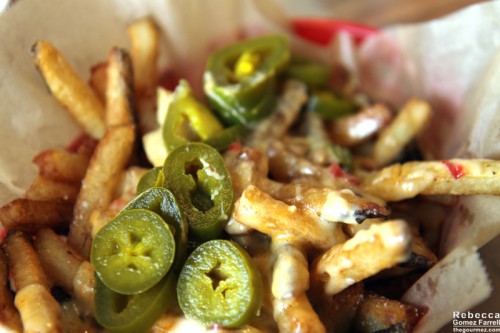 They were fork fries for me; I could tell my hands weren’t making it out of that platter without a whole package of napkins. The pimento cheese had a great mix of firm and creamy textures, the fries were thick enough to hold their own against all that sharp cheese, and the pickled jalapenos made every bite that included them zing. Would—will—order again. And again.

I was also a big fan of the collards, mainly because they defied the traditional Southern-style collards that I can’t stomach—too much pork grease, too little actual vegetal matter that survives hours of stewing in the pork grease and vinegar. 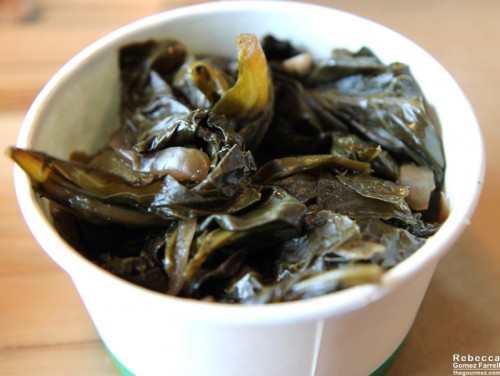 These collards still had some firmness left, tasted great, and used a moderate amount of brown sugar and apple cider vinegar to complement, rather than overwhelm, the greens. To give vegetarian diners more options, Farm Burger doesn’t cook them with pork. That decision also works for this non-vegetarian who thinks vegetables shine more when they don’t taste like meat. I took our leftovers home.

The other veggie-heavy dish was the current coleslaw special, made with kale. The coleslaw appears to change based on seasonal veggie selections. 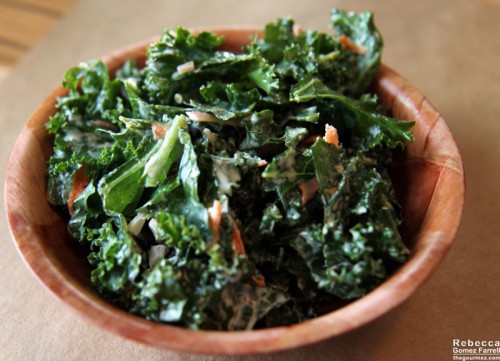 Now this side is where the quality of ingredients really came through, because I enjoyed the slaw despite it having very little by way of flavor other than what the kale provided, which was a lot! The sauce just tasted like thickened cream, and the tiny bits of shredded carrot and paper-thin red onion did not add much. The coleslaw would assuredly be improved with more traditional sauce ingredients like celery seed and a stronger vinegar presence, but it did make me feel healthy.

Which we needed with all that food! I should probably mention the burgers at some point, huh? The basic burger starts at a reasonable $7.50 for grass-fed beef—believe me, I’ve frequented a lot of similar establishments, and $7.50 is reasonable. There are also plenty of free toppings to choose from, over ten if I can count correctly. The long list of add-ons ranges from $1 to $3 and includes items like guacamole, pork belly, oxtail marmalade, fried eggs…the options are nearly limitless. According to the manager, Michael, most people do make their own burgers, but we chose from the six “blackboard burgers” to make our lives easier. The #1 comes with aged Tillamook white cheddar, caramelized onions, and the Farm Burger sauce, ringing in at $8. 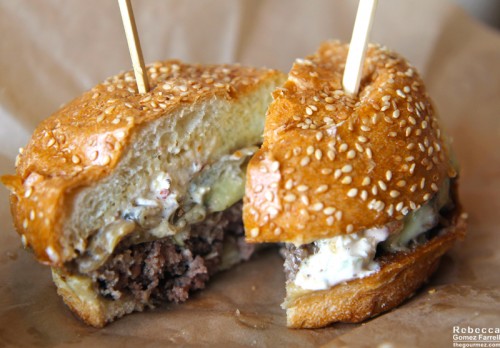 For Christina, the patty was overcooked, but it was just right for me, on the edge of well done with an even char from the griddle and a moderate beef flavor that would be more memorable with a blackened crust option or paprika or seasoning salt mixed into the patty. I quite liked the sesame seed bun’s squishy innards and chewy outer crust. Next time, though, I’d make my own burger, perhaps adding the guajillo chile sauce and haystack onions. Or maybe a beer-battered onion ring, paprika mayo, and Point Reyes blue cheese?

We tried two more side dishes, both of them with a lot of potential that wasn’t quite realized. Macaroni and cheese with pulled pork is a brilliant idea, of course. 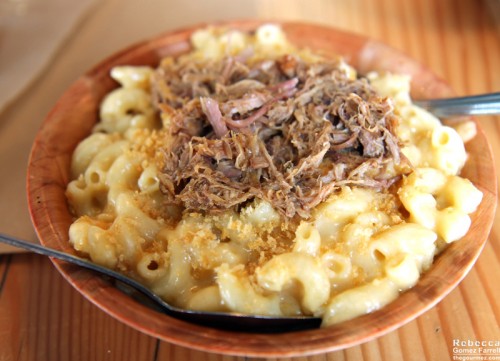 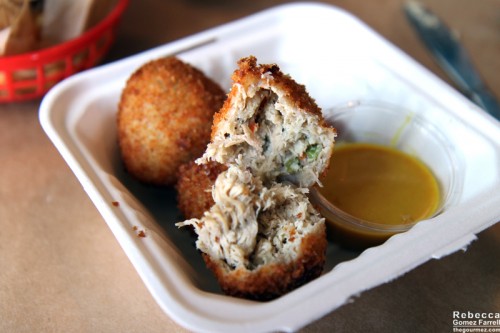 That sounds inspired, no? But we were totally surprised when they didn’t ooze with sauce once we cut into them for our photos. Obviously, our expectations of what a chicken pot pie fritter would be were way off. What they are is densely packed spheres of finely shredded chicken that’ve been cooked with celery and carrot, breaded with a coating somewhat finer than panko, and fried. I loved the crunch of that coating, and the chicken itself tasted good, but it was another example of natural flavor not having enough oomph. Maybe it could be served with chicken pot pie gravy for dipping rather than the BBQ sauce and honey mustard?

So Farm Burger was a mixed bag for me. I really loved those collards and the pimento cheese fries are an indulgence worth digging into—often.  The burgers are good, and with the right topping combination, they have the potential for greatness. But all the other sides we tried failed to impress, most notably for being under-seasoned, which I promise is not a complaint I have often. I really, really wish the chicken pot pie fritters and the mac and cheese had lived up to their inventive potential.

Yet when it comes down to it, this is a burger joint, and do you need anything else but a burger and fries at one of those? Not in my experience, and Farm Burger delivers on those counts and on the count of using good practices to source their ingredients at relatively affordable prices. So if you’re looking for a burger fix in the Gilman District neighborhood, you definitely have a place to go. And I look forward to someone telling me how wrong I am about the tasteworthiness of the chicken pot pie fritters…